100,000 children still need to be evacuated from Ukraine as Russian troops continue to attack 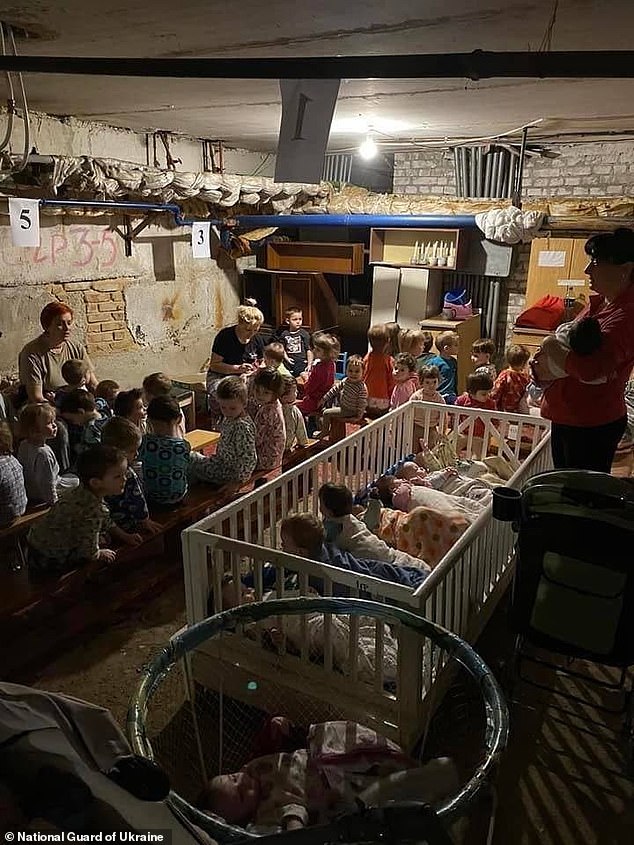 There is a dire need to evacuate 100,000 orphans from Ukraine, as Russia continues shelling and bombing cities across the country.

Reports suggest orphans are being forced to hide in basements out of fear, while Putin’s army indiscriminately fires rockets, even hitting an orphanage with illegal cluster bombs.

The caretakers do their best to keep the babies calm, raising six babies in a single cot due to space constraints.

In Kyiv, where supplies are short and the Russian military is making steady progress, there are 700 children’s homes with 100,000 orphans, half of whom are disabled.

Of this large number, just 2,500 orphans have been evacuated – with British charity Hope & Homes for Children helping 100 to safety in Dnipro and Vorzel.

100,000 orphans in dire need of evacuation from Ukraine (pictured), as Russia waging war across the country 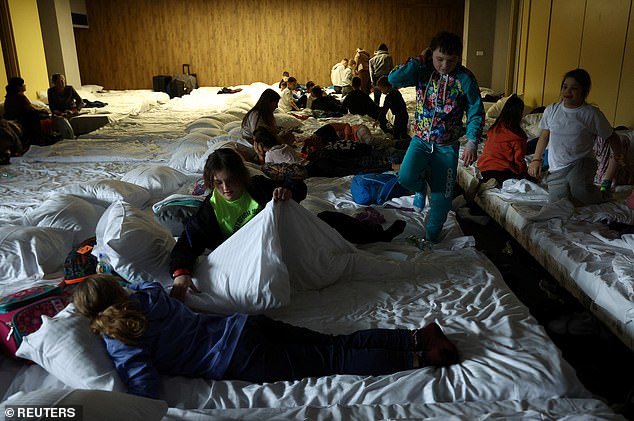 While many orphans have been able to flee Ukraine (pictured are orphans who have been taken to Poland), an unconfirmed number of thousands are missing in the country.

There are about 5,000 children with disabilities who still have to be rescued, Mirror Reported.

Russian shelling made it very dangerous to try to move children to a safe location.

The workforce is also small, as 60,000 seek sanctuary with their families.

The caretakers say they have to deliver the children to a safe place under the ground by declaring a ‘children-explosion’.

They also tell them to eat every scrap on their plates and that food and water are running out and they can’t guarantee when their next meal will be.

Most of the 100,000 children are considered ‘social orphans’, meaning they maintain some ties with their families. 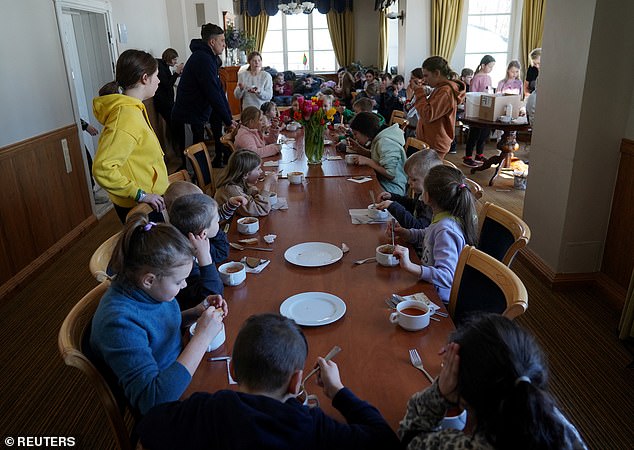 According to Ukraine’s defense ministry, seven Ukrainian civilians, including a child, were killed in shelling yesterday on a humanitarian convoy of Russian refugees, forcing them to return.

He was among hundreds of people who tried to escape from a small village called Peremoha, just 12 miles northeast of Kyiv.

However, this evacuation did not coincide with the ‘Green Corridor’ agreed with Russia.

Moscow has said it will establish humanitarian corridors through conflict zones, but Ukrainian officials have accused Russia of obstructing those routes and firing civilians.

The British charity, Hope and Homes for Children, rescued 50 children, including two children and two disabled, from Dnipro in central Ukraine.

The report said 50 others were taken on a bus from Vorzel near the capital after an illegal Russian cluster bomb hit their orphanage. 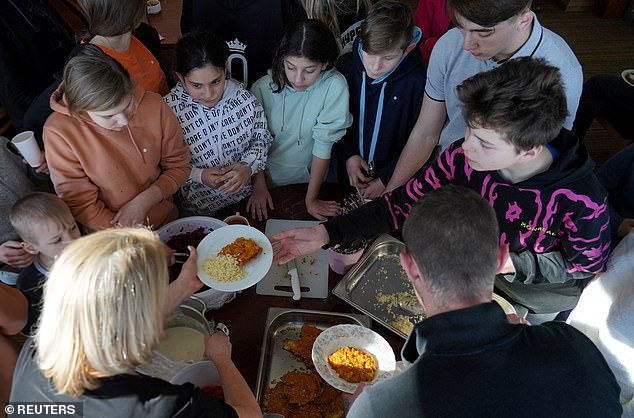 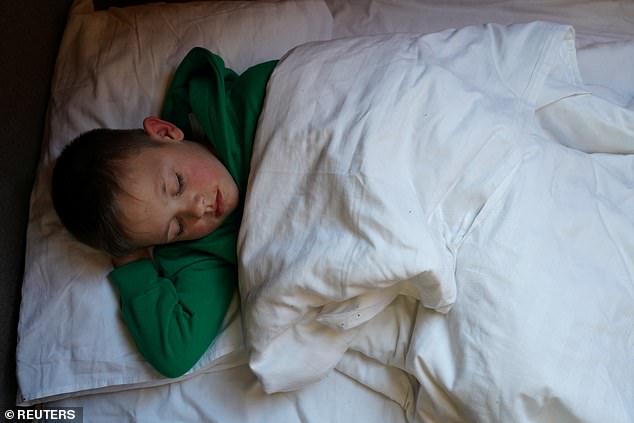 A Ukrainian orphan boy sleeps safely in a bed in Trakai, Lithuania

At Dnipro, Hope & Home colleague Daria, 40, shares her story of how war arrived there.

He told The Mirror: ‘When the first rocket dropped it was a big blow. We said, “Kids, your life is about to change today. Rockets can fly at any time, soldiers can walk through the door”.

‘We very quickly started instructing them on how we should get into the basement during an airstrike.

‘We told them, “The war has started, we should treat each other well, we should not argue”.

‘We told them to make sure you finish every bite because we don’t know when the next food delivery will happen. Even now we can’t tell them when they will eat next time.’

‘On the third night we heard the sound of bombs nearby. I walk into the dorm and say ‘kids, blast’ and they quickly and orderly go into the basement. 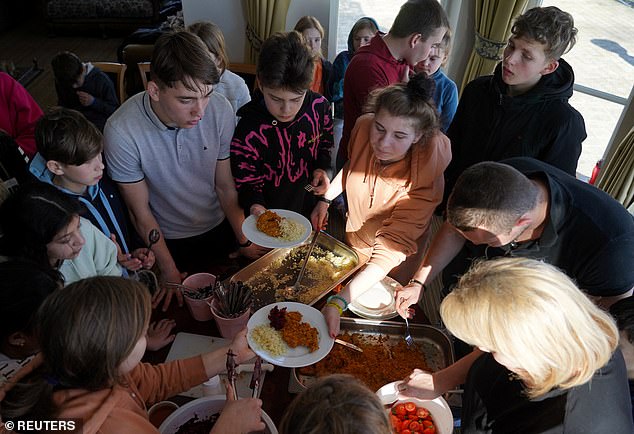 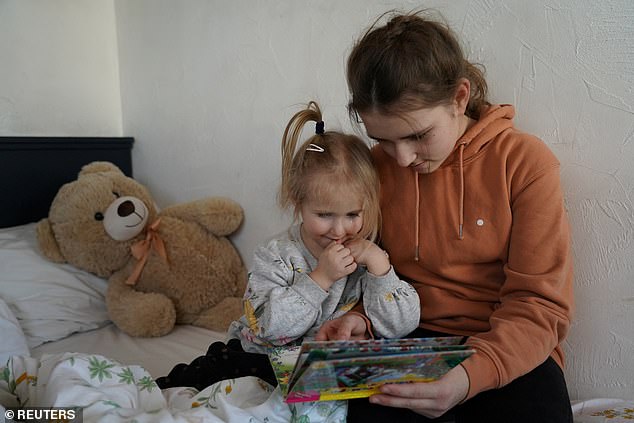 While thousands of orphans have been evacuated (pictured), thousands are also unaccounted for

Ukraine has the highest number of orphans in Europe and 100,000 were already in care.

In Kyiv, Halyana, the local director of Hope & Home, has managed to relocate some children.

Halyana is separated from her family and fears for her 86-year-old mother in eastern Ukraine, where Russian troops are at large.

While the charity’s CEO Mark Waddington, 53, is directing operations from the Ukraine-Moldova border.

A team of former US military veterans called Aerial Recovery is helping vulnerable people fleeing crisis, working with Ukrainian officials to set up a system that tracks the country’s orphans will be easy.

Team operations chief Jeremy Locke told the BBC: ‘They are very easy prey – they are looking for help.

‘So if you’re an adult with some food or shelter, they’ll come with you. They don’t know any better.

‘Gangs are very advanced – it’s big, well-financed networks that do this for a living. they are good at it in times of peace

‘Now this is a war, this is anarchy, and they are taking advantage of the fact that there is discord.’

In a meeting with local officials, Mr Locke said he expressed concern that 5,000 children were unaccounted for in his records.

He added: ‘They have either been casualties in battle, or they have slipped across the border, or taken out of bounds by smugglers or by those who are doing it the wrong way.’

The West should not rule out the assassination of Vladimir Putin, says former British army chief