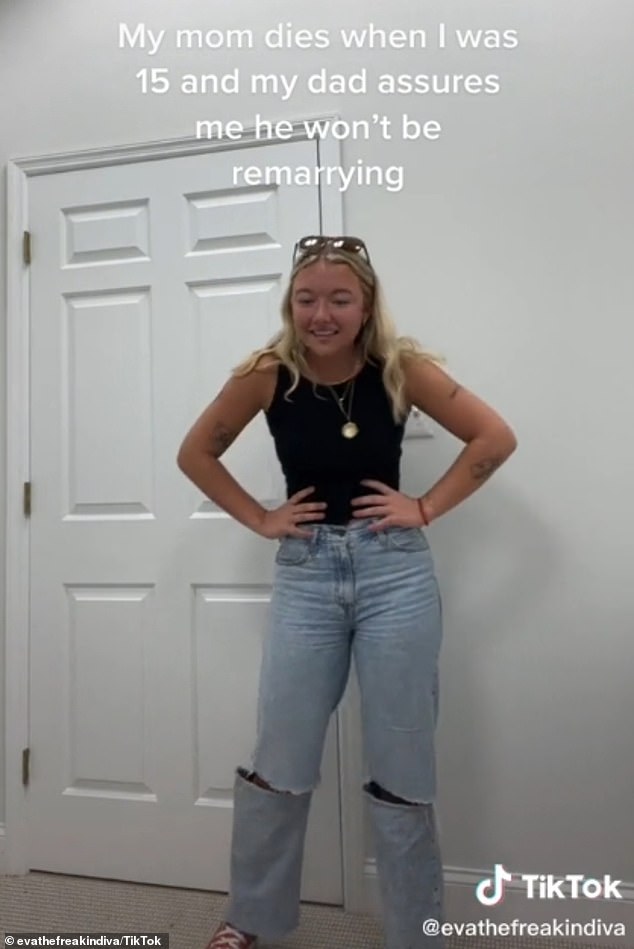 A woman has opened up about how she was left an orphan after her father was fatally shot by her stepmother — an ex-ballerina and model who was 30 years his junior — amid their custody battle.

Eva Benefield, now 21, from Charleston, South Carolina, shared her version of events in a series of TikTok videos earlier this month, as she waits for her stepmother Ashley Benefield’s impending trial.

Ashley, 30, was arrested and charged with second-degree murder five weeks after she killed Eva’s father, Doug Benefield, on September 28, 2020, claiming she shot him in self-defense.

The case was the focus of a recent episode of CBS’s 48 Hours — titled ‘The Black Swan Murder?’ — which aired in June and featured an interview with Eva.

Eva Benefield, 21, from Charleston, South Carolina, opened up about how her father was fatally shot by her stepmother in a series of TikTok videos earlier this month 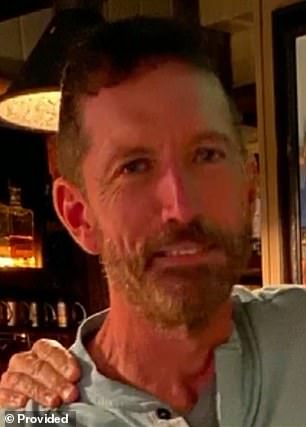 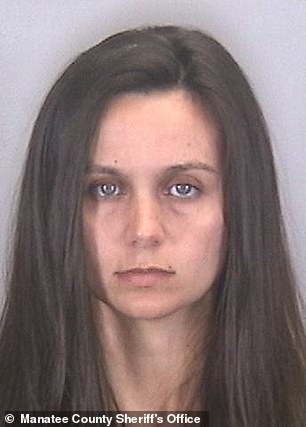 Eva’s stepmother, Ashley Benefield, now 30, (R) was arrested and charged with second-degree murder five weeks after she fatally shot her husband, Doug Benefield (L), who was 59 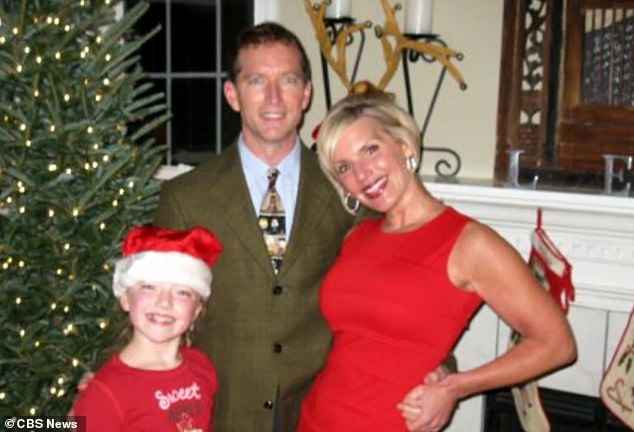 Doug, whose first marriage ended in divorce, was out of town for work when his second wife, Renee Cousar Benefield (pictured), died unexpectedly of an underlying heart condition 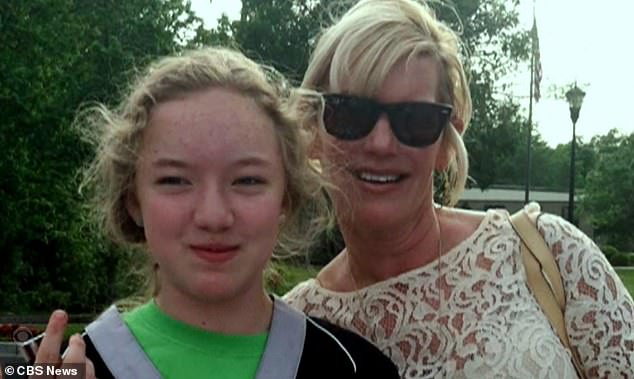 Eva, then 15, was the one who found her mother dead. ‘That was the start of a lot of trauma,’ she said

A few months later, Eva gave an abridged account of how her life was turned upside down in a now-viral TikTok video, which has been viewed 11.3 million times.

In a series of follow-up clips, she detailed how her father’s whirlwind marriage to the former professional ballerina led to his death.

Doug, whose first marriage ended in divorce, was out of town for work when his second wife, Renee Cousar Benefield, died unexpectedly of an underlying heart condition. Eva, then 15, was the one who found her mother dead.

‘That was the start of a lot of trauma,’ she said.

Eva explained that her father had assured her he was never going to get married again, but he wed Ashley less than a year later.

Doug was 54 and Ashley was 24 when they met at Ben Carson’s home in Palm Beach, Florida, in August 2016, while she was campaigning for then-Republican presidential nominee Donald Trump. Despite their 30-year age gap, they hit it off.

They shared Republican views, a belief in God, and a passion for the Second Amendment, Vanity Fair reported last year. 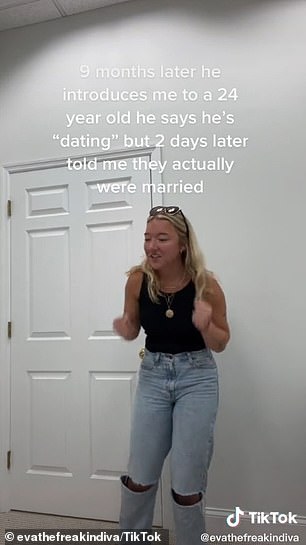 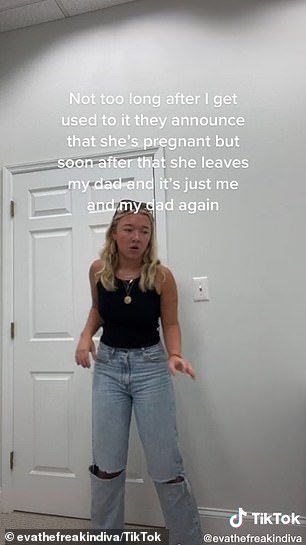 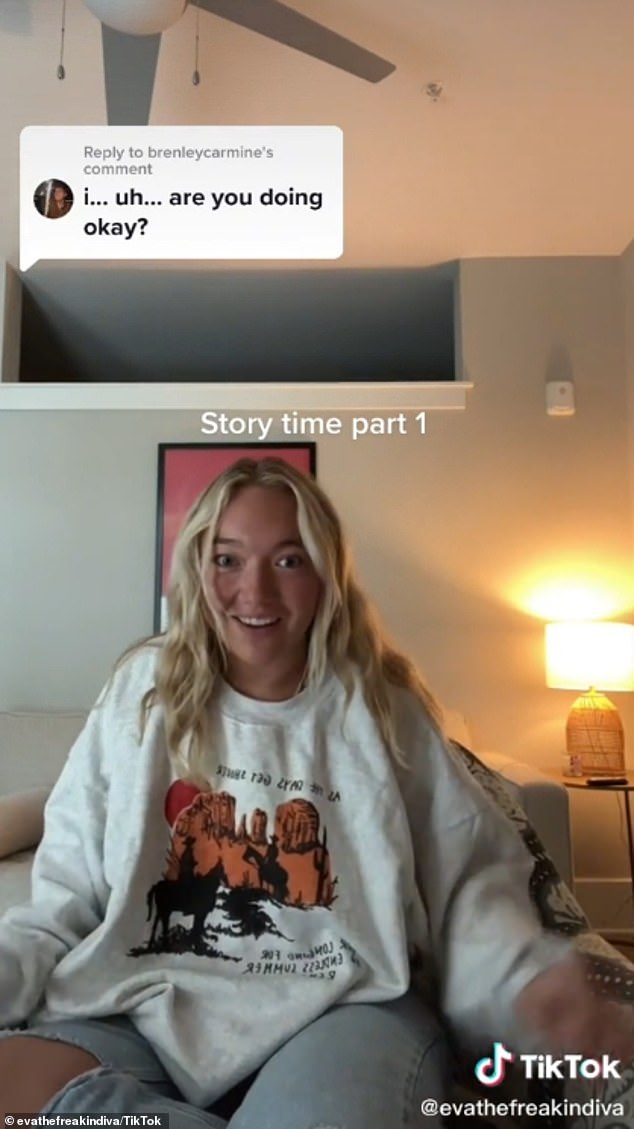 In a series of follow-up clips, Eva detailed how her father’s whirlwind marriage to Ashley led to his death

Just 13 days later, they got married without telling Eva.

Eva explained that her father told her he was seeing someone right before Ashley came to stay at their home in Mount Pleasant — a suburb of Charleston — only to find out a few days later that they were already married.

‘He was like we need to have a family meeting, and I was like, “Mmm, no, because we’re not a family, and the only thing you should have to tell me is if you proposed,”‘ she said. ‘As soon as those words came out of my mouth, he goes: “We’re married.”‘

Eva’s late mother had two sons from a previous marriage, and she recalled her half-brothers’ reactions when she told them the news. They pointed out that Ashley was younger than they were.

She said she tried to ‘get used’ to Ashley, who was ‘not that nice,’ alleging that her stepmother would twist her words to put a strain on her close relationship with her father.

Doug wanted Ashley to be a mother figure for Eva, but she felt she didn’t need one. She said her sister-in-law had been there for her after her mom died, and she considered her dad her best friend. 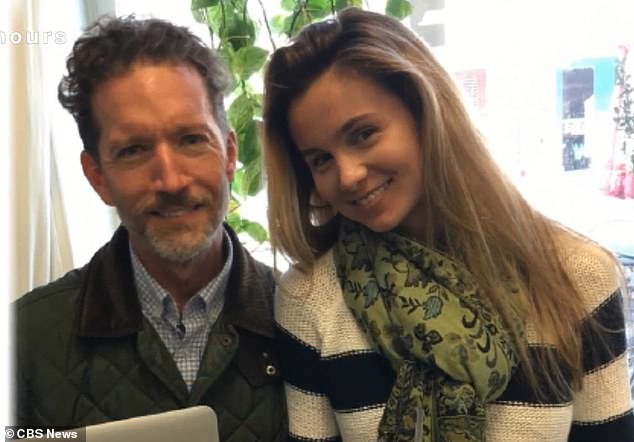 Eva’s father assured her he had no plans of remarrying, but nine months later, he fell for Ashley (pictured), a former professional ballerina and model 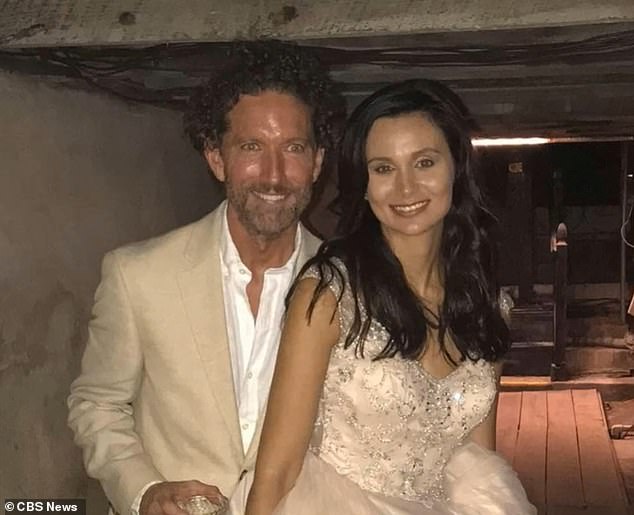 As Eva tried to adjust to life with her new stepmom, Ashley and Doug founded American National Ballet, or ANB, an inclusive company featuring dancers of all body types and ethnicities.

Ashley was passionate about ballet, but her professional career was over by the time she was 21. Friends of Doug’s told 48 Hours that he wanted to make her dream a reality.

In 2017, dancers from all over the world arrived in Charleston to join ANB. Ashley also found out she was pregnant that summer.

Eva noted in one of her videos her father had a vasectomy, but Ashley had asked him to have it reversed. She explained that her stepmother wasn’t expected to get pregnant that quickly.

‘We were just dealing with Ashley who was having a terrible pregnancy,’ she said. ‘She was sick all the time and my dad was at work — because he already had his job and she convinced my dad to start an international ballet company.’

Doug was unable to care for Ashley while he was traveling for work, so she returned to Florida to live with her mother. 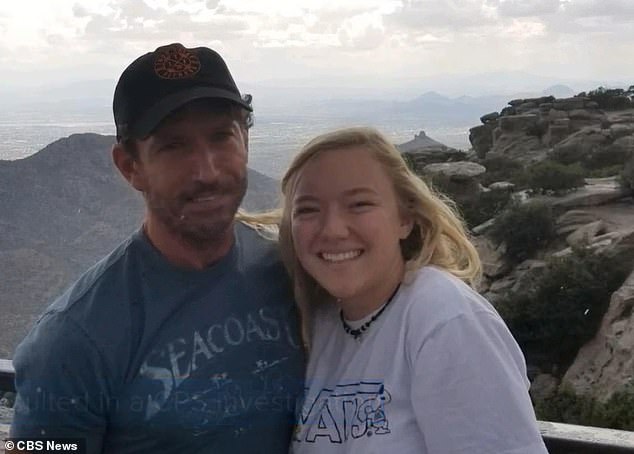 Eva said she was best friends with her father, but his marriage put a strain on their relationship. He was also working all the time after founding a ballet company with his new wife 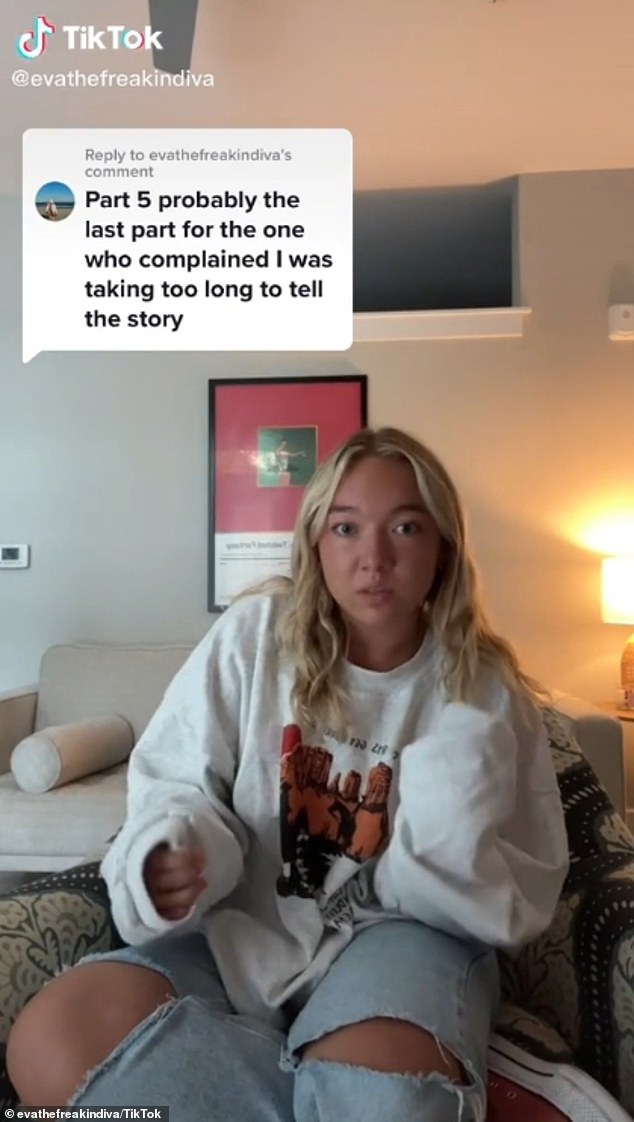 Ashley left Doug and moved in with her mother in Florida while dealing with a difficult pregnancy. She didn’t tell him when she gave birth to their child in March 2018

Eva said she came home one day and noticed that her stepmother’s car was gone and all of her things were missing. Then she found the letter she had left.

Ashley wrote that Doug was ‘possessive’ and ‘controlling’ in the four-page diatribe, according to 48 Hours. She also referred to an incident in which he fired a gun into the ceiling during a heated argument, saying she was ‘fearful for her life and the safety of her unborn child.’

‘I could just see the hurt in his eyes. He felt betrayed,’ Eva said of the moment her dad read the letter. ‘He didn’t say anything, but I could tell he was upset.’

Eva said her relationship with her dad went back to how it used to be after Ashley left, but he struggled with the split and the failure of their ballet company.

Ashley claimed that Doug was poisoning her with tea and also accused him of poisoning his late wife. Her allegations were investigated but never substantiated. 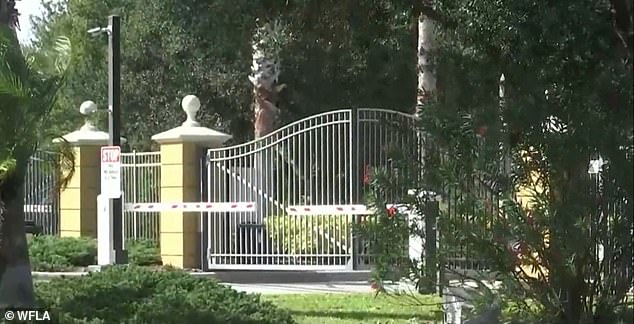 Doug and Ashley later reconciled and were alone in her mother’s home in a gated community in Florida (pictured) when she shot him twice. He died in the hospital about an hour later 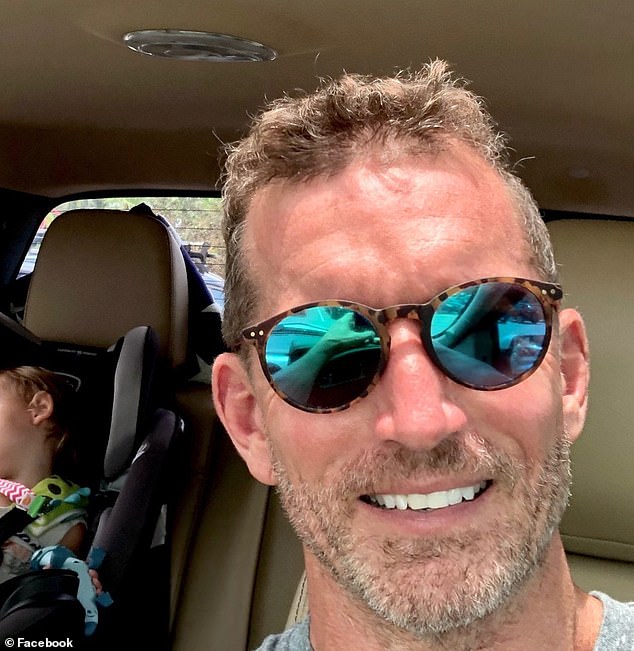 Ashley told investigators that she shot Doug in self-defense during a ‘domestic argument,’ but detectives were unable to find evidence to support her claims

Ashley gave birth to their daughter in March 2018 without telling Doug. It took him a month to find out the news.

However, despite everything that had happened between them, they ended up reconciling in the midst of their custody battle over their daughter.

Eva said she was 18 and about to start college when her father moved to Florida to be with Ashley. She ended up leaving school after her freshman year because she didn’t want her father to pay tuition for online classes during the pandemic.

Even though her father was gone, they were as close as ever. She explained that he would text her every morning with a Bible verse. She was working full time, while her father had plans to move to Maryland with Ashley and their daughter.

When her dad didn’t text her one morning, she knew something was wrong and tried to contact him. Doug didn’t answer her calls or her stream of texts.

‘I freaked out a little bit because when my mom died, she didn’t answer her phone either and then I found her,’ she explained. 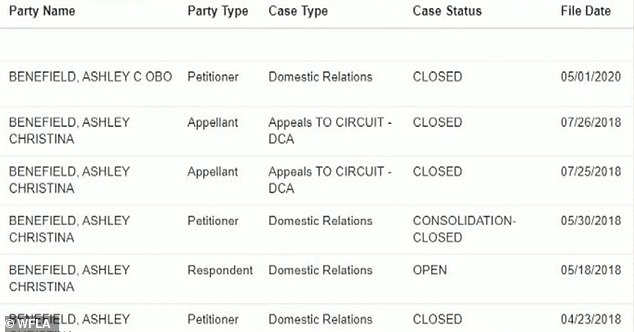 Ashley filed petitions accusing her husband of domestic violence a number of times. She also accused him of poisoning her, but her claims were never substantiated 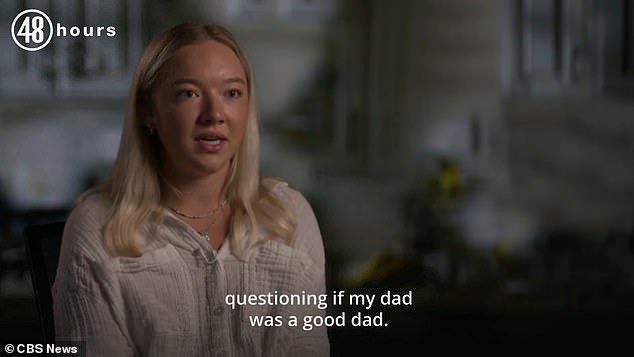 Eva was at her sister-in-law’s house when she found out the devastating news.

Eva then asked if Ashley had killed her father.

Doug and Ashley were alone in her mother’s home in Florida when the shooting took place.

He was shot twice while he was turned away from his wife: once in the leg and once in the arm, where the bullet traveled to his chest cavity,’ 48 Hours reported.

Doug was alive but unable to speak when medical workers arrived on the scene, and he died in the hospital an hour later.

Ashley told investigators that she shot Doug in self-defense during a ‘domestic argument,’ but detectives were unable to find evidence to support her claims. 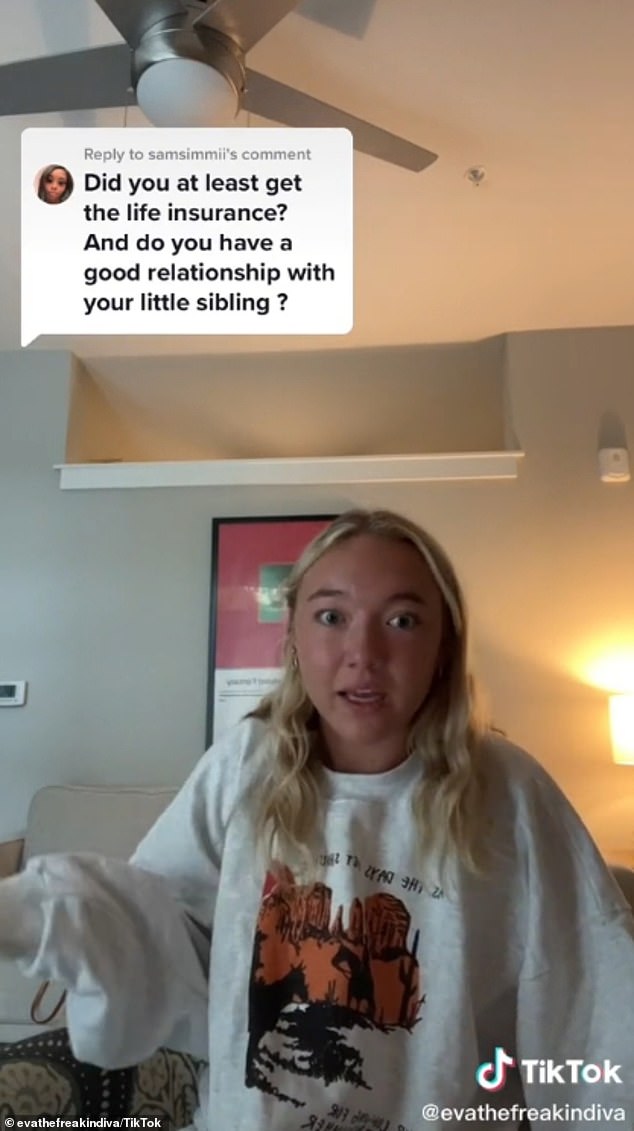 Eva said she only had $15 in her bank account at the time of her father’s death, and she later learned that his life insurance policy had ended three months before 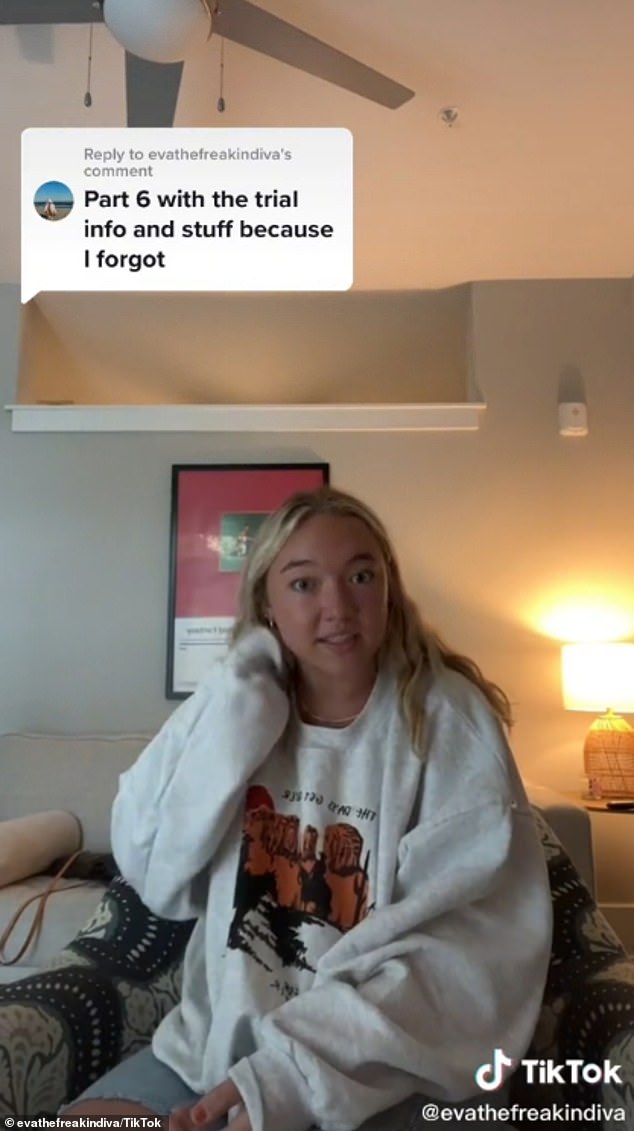 Ashley has pleaded not guilty to the charges, and her trial is slated to start next year. ‘I want her to go to jail,’ Eva said of her stepmother 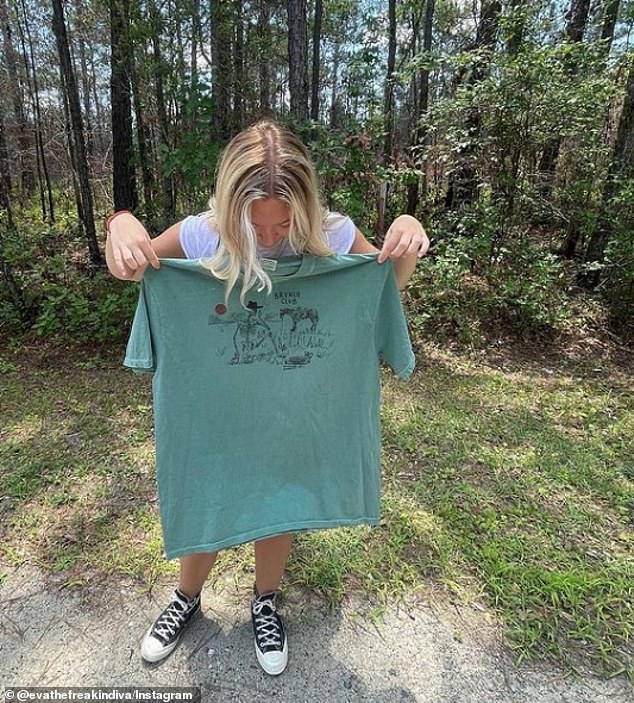 Eva has her own studio apartment that she rents, and she also founded her own clothing brand, Ghost Cowboy, a line of T-shirts, sweatshirts, and hats featuring her artwork (pictured)

She was arrested and charged with second-degree murder five weeks later. She pleaded not guilty. After spending a little over two weeks in jail, she was released on bond.

Eva said she only had $15 in her bank account at the time of her father’s death, and she later learned that his life insurance policy had ended three months before

She explained that while she had the support of her remaining family, she was financially on her own.

‘I have never taken a handout from anyone,’ she said.

Eva has her own studio apartment that she rents, and she also founded her own clothing brand, Ghost Cowboy, a line of T-shirts, sweatshirts, and hats featuring her artwork.

In one of her videos, she shared her frustration with the delays on Ashley’s trial, which is now slated for 2023, saying she hasn’t even been deposed yet.

‘I want her to go to jail,’ Eva said of her stepmother.