4 takeaways from the first day of Ghislaine Maxwell’s trial. 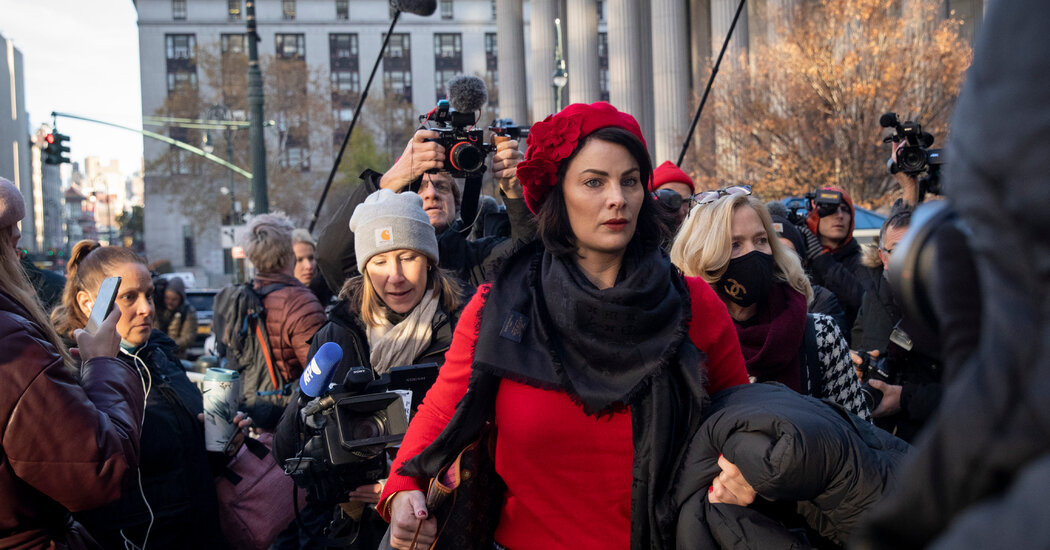 The sex trafficking trial of Ghislaine Maxwell, Jeffrey Epstein’s former romantic partner and employee, kicked off Monday in federal court in Manhattan with opening statements and testimony from one of the pilots who flew Mr. Epstein’s private plane.

In the coming weeks, jurors are expected to hear testimonies from four women who, according to prosecutors, were abused as teenagers by Mr. Epstein.

Here are some takeaways from the first day of the trial:

The jury hears the story of Jane, who was 14 when she met Mr. Epstein.

In describing how evidence would show that Ms. Maxwell helped Mr. Epstein traffic and sexually abuse teenage girls, a prosecutor outlined the story of an accuser who was only referred to by a first name, Jane.

Jane met Mr. Epstein and Mrs. Maxwell in 1994, prosecutor Lara Pomerantz told the jurors: A seemingly harmless encounter that began at a picnic table with the realization that the two adults and the teenage girl all lived in Palm Beach, Florida. It ended when Jane gave her phone number.

That was the “beginning of a nightmare that would last for years,” said Ms. Pomerantz. She said Ms. Maxwell helped gain Jane’s trust with shopping trips and through Mr. Epstein “helped normalize abusive sexual behavior”.

The jury would hear directly from Jane and three other women who had similar experiences as teenage girls, the prosecutor said.

The defense will try to show that the memory of the four accusers is unreliable.

However, minutes later, a defense attorney, Bobbi C. Sternheim, told jurors that memories of witnesses like Jane, who are expected to testify under oath about Mr. Epstein, couldn’t be trusted.

She suggested the prosecutors had “unreliable and suspicious” memories that could have been “corrupted” or “contaminated” over the years by “constant media reports.” She also suggested that the plaintiffs were motivated by a desire to win “a big jackpot of money” from a possible civil suit against Mr Epstein’s estate.

“Every accuser’s story is thin,” she told the jurors. “They’ve been influenced by lawyers, by the media, by things they’ve read and heard and by money, a lot of money.”

A confidant of Epstein. Ghislaine Maxwell, the daughter of a British media mogul and once a fixture on the New York social scene, was a longtime companion of Jeffrey Epstein, who committed suicide after his arrest on sex trafficking charges in 2019.

The process. The long-awaited trial of Ms. Maxwell began in Manhattan on November 29, 2021. Her sex trafficking trial is widely seen as a proxy for the courtroom settlement that Mr. Epstein never received.

The Prosecutor’s Case. Prosecutors say Ms. Maxwell psychologically manipulated young girls to “groom” them for Mr. Epstein. The concept of grooming is at the heart of the criminal case against her.

The defense. Ms Maxwell’s lawyers have sought to undermine the credibility of her accusers and question the plaintiffs’ motives — efforts they have indicated they would continue during the trial. Mrs. Maxwell has steadfastly maintained her innocence.

Another defensive strategy will be to shift the blame onto Mr. Epstein.

Ms. Sternheim portrayed Ms. Maxwell as a “scapegoat” on trial alone because Mr. Epstein committed suicide in a federal prison. That suicide, she told the jurors, left “a gaping hole in the pursuit of justice” for many people. Ms. Maxwell “fills that gap,” Ms Sternheim added. “Fill that empty seat.”

“Since Eve was accused of seducing Adam with the apple,” she said, “women have been accused of the evil behavior of men.”

The prosecution used one of Mr. Epstein to frame the judges.

The first witness for the prosecution was not one of the accusers, but a private pilot: Lawrence Paul Visoski Jr., who had worked for Mr. Epstein from 1991 to 2019.

“Almost every four days we were on our way to fly somewhere,” he said. Mr Visoski said he didn’t always know exactly who flew with him on Mr Epstein’s planes.