A pint would cost £25 if drink prices rose at the same pace as inflation, energy bosses warn 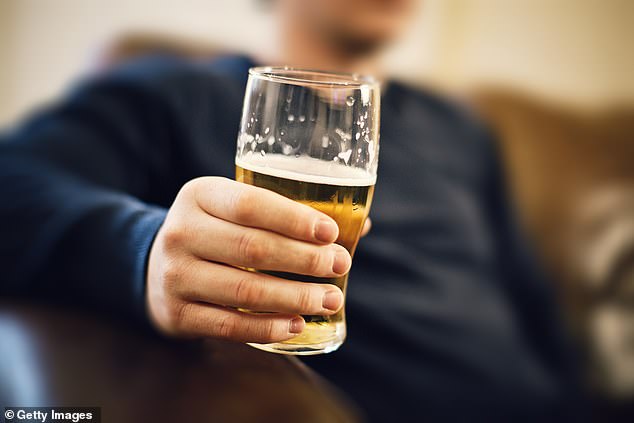 Energy bosses have called for the £1,700 increase in annual bills to be scrapped, amid warnings that inflation will hit a staggering 18 percent.

Industry leaders also called for bailouts, claiming that if the price of beer increased at the same rate as wholesale gas, a pint would cost £25.

Rising inflation is being driven by the fact that household energy costs will rise from £15 billion in a normal year to £75 billion, Octopus Energy said.

And bosses have now argued that the scale of the crisis is so staggering that it requires the kind of emergency response seen during the pandemic with a massive bailout for struggling families. The warnings put pressure on Tory leader rivals Liz Truss and Rishi Sunak to pledge more action to tackle the cost of living.

Business executives claim that if the price of beer increased at the same rate as wholesale gas, a pint would cost £25

Mr Sunak yesterday tried to exploit the spat, saying Miss Truss would not be able to respond to the crisis on the scale needed if she pushes through with promised tax cuts.

On Friday, industry regulator Ofgem is expected to announce that the energy tariff cap will rise, meaning typical annual bills would rise from just under £2,000 to around £3,700 from 1 October, with more pain in the new year.

Charities say millions of households would be unable to keep warm, keep the lights on and put food on the table.

Higher utility bills are putting the greatest pressure on the cost of living since the 1950s, and analysis by a leading US bank suggested headline inflation could hit an astonishing 18.6 percent spike. The grim forecast was partly driven by the pound’s depreciation amid recession warnings and strikes, which will make imports of oil, gas, food and other commodities more expensive.

Analysts at investment firm Citi have predicted inflation will rise to 14.8 percent in October as energy bills rise, followed by a rise to 18.6 percent in January if gas and electricity costs rise again.

The warning came as:

But the recent rise in gas prices has pressured her to provide more immediate assistance to families and businesses struggling to pay their utility bills. Over the weekend, she said that while she wouldn’t “get the handout first,” she was now willing to look at the issue “across the board.”

Kwasi Kwarteng, who is being tipped as her likely chancellor, told the Mail on Sunday that ‘help is coming’.

A government source said last night that the magnitude of the crisis would leave Miss Truss no choice but to move on. “Over the past two weeks it has gotten much worse,” said the source. “It’s very hard to see how she can’t say anything when the price hike this week is as bad as everyone fears.”

As Chancellor, Mr Sunak unveiled a £15bn support package based on predictions that the price cap would rise to £2,800 in October. But analysts now think it will rise to around £3,700.

The sharp rise in energy prices will also cause inflation to rise further to levels not seen since the 1970s.

Investment experts Hargreaves Lansdown said food inflation is already above 18 percent for many essentials. Personal finance expert at the firm, Sarah Coles, said: “An inflation rate of 18.6 percent would put millions of people in a bind. And because these terrible price hikes are being driven by the essentials people need to survive – such as food and warmth – it will hit those with lower incomes the hardest, who have nothing left to give.

“Amid these terrifying predictions, a winter of misery looms and little help is in sight.”

Energy industry bosses said yesterday that the government must step in and shoulder the immediate burden of the rise in energy costs.

In the short term, the Treasury would raise £40 billion to cover the higher wholesale gas and electricity prices that are a direct result of the Russian invasion of Ukraine and the resulting sanctions.

This money would then be recovered from customers through a future charge on accounts, spread over ten years or more.

Greg Jackson of Octopus Energy, which has some 3.2 million customers, told the BBC: ‘We need more help for government customers. The reality is that customers are being asked to pay the price of gas, which has been armed by Putin.

‘To put it in perspective, the UK’s energy bill is going from maybe £15bn in a normal year to £75bn this year. That’s the equivalent of nine pence or more on the basic income tax rate. No government should announce that and in the same way no government should let this happen to customers.”

He said consumers need to understand that gas prices are up to 11 times higher than normal and this is equivalent to a £25 pint of beer. Asked what needs to be done, he said: “Many of the energy companies are now in favor of a tariff deficit fund.” . Essentially, you freeze the price cap roughly where it is when prices are high and finance that by paying it back when prices fall.

“Then prices would stay where they are now, which are still two-thirds higher than they were a year ago, and then in the next decade they would drop again to maybe £1,000 a year.” Jackson said that energy retailers, such as Octopus, are not making a profit, but that it is the producers who source gas and electricity, such as BP, Shell and Centrica, who are benefiting from the increase in wholesale prices.

Dale Vince, founder of Ecotricity, supported this idea and said ministers should cancel the October price hike. “The government must step in and pick up these costs as they did during the pandemic. We need £40 billion to get through this winter, that’s 10 per cent of what was spent during the pandemic, and that’s the only thing that will solve this,” he said.

A government spokesman has already introduced a £37 billion package to help households, including £1,200 each for eight million of the most vulnerable families.

Watching TV is linked to dementia risk, while the computer can guard against it