Passengers ‘pretend disabled so they can skip queues’: Airport bosses order more wheelchairs – and extra STAFF to push them – amid claims desperate travelers are posing as ailments to get in front of queues as chaos at terminals ramps up

Birmingham airport bosses said the number of people asking for help had risen 20 percent and it needed to buy more wheelchairs and hire additional staff to push them.

An insider at a meeting of industry leaders on Wednesday with Grant Shapps, the transport secretary, said: “When people act like it might possibly stop people with disabilities from getting a place, and that’s pretty grim.”

The source added: “You can’t just say to people ‘no, you’re lying’.”

Another manager said, “There must be a special place in hell for people who pretend to be disabled.”

Passengers with disabilities can skip security lines and, for a small fee, use fast track lanes and receive assistance with immigration, customs and baggage retrieval.

UK airports have faced criticism over reported 10-hour passenger delays. It comes as the industry finds itself in the midst of a hiring crisis due to a spike in demand since covid restrictions were lifted (Pictured – Birmingham airport) 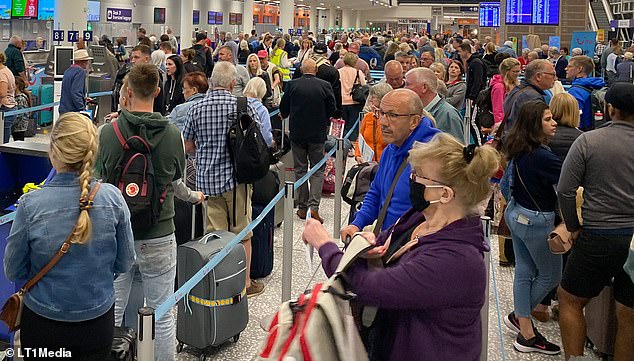 Hundreds of flights have been delayed or canceled in recent weeks and passengers have faced several hours of waiting time for arrivals and departures.

Jet2 boss Steve Heapy said airports struggled to hire staff because people would rather “live on benefits and get on their knees”.

The industry wants the rules to be relaxed post-Brexit so they can hire foreign staff, rather than relying on UK job applicants who have increasingly missed job interviews or aptitude tests.

Mr Shapps said it is unlikely the Home Office would make an exception for the airline industry, which he blamed for the problems.

Pressure on the labor market “is no excuse for poor planning and overbooking flights they cannot operate,” he added.

Yesterday, easyJet canceled a further 36 flights, from Gatwick to places like Nice, Marseille and Montpellier. That brings the total of canceled flights over the half term to more than 200. 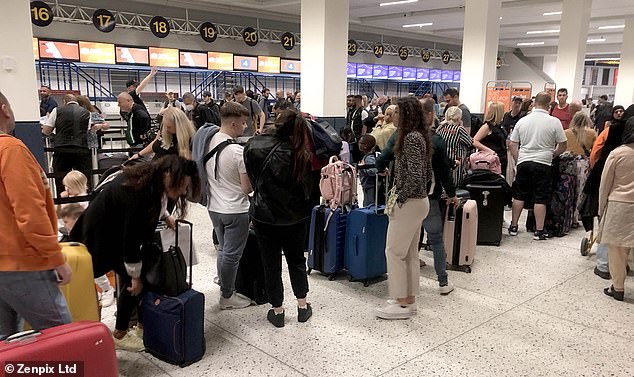 Tour guides are bracing for more chaos this weekend, with 10,794 flights – carrying 1.9 million people – due to take off.

Rory Boland, editor of Which? Travel, called for a regulator with ‘real teeth’ so that airlines get the right penalties.

Mr Boland said: ‘The shameful scenes at UK airports this six months are the result of an industry where some airlines feel they can get away with ignoring consumer rights and acting with almost impunity.

“Clearly, passenger rights need to be strengthened… and the Civil Aviation Authority should be empowered to issue direct fines so that it can hold airlines accountable for breaking the law.”

Ryanair boss Michael O’Leary told ITV News that the army should be called in to man the security counters to clear the queues.

A spokesperson for Jet2 said: “While meeting with the government and industry, Mr Heapy expressed frustration with the current job market as Brexit has taken hundreds of thousands if not millions of people out of the job market.”

They added: ‘To clarify, the other rumors circulating are by no means the opinion of Mr Heapy or our proud UK based company.’

Spanish air traffic controllers could cause even more trouble for holidaymakers by going on strike successively over staffing levels.

A decision is expected by the end of this month by USCA, a union that represents 90 percent of the workforce.

FLIC EVERETT: My journey through two lost marriages has taught me how to make my THIRD last for ever

JAN MOIR: Amber Heard wanted to be a heroine, but now she’s defined by this circus of sadness