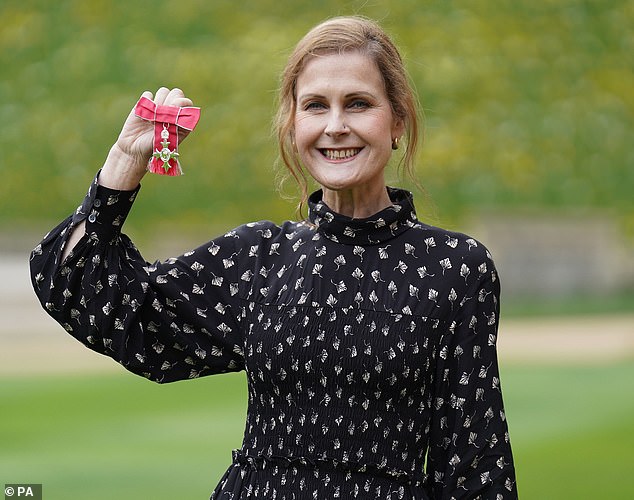 Singer Alison Moyet has once again been forced to go offline after being hounded by Twitter trolls – this time only for saying she was “really robbed” by the Queen’s death.

Moyet, 61, is an outspoken voice on the platform, known for her witty conversation with followers and she has pushed for leftist goals, including nationalization and higher taxes.

But after her heartfelt tribute to the Queen, she faced backlash from anti-royalists, forcing her to turn off commentary.

Yesterday, the former Yazoo star posted that she had “been off Twitter for a while.”

In her original post, Moyet tweeted: “I am truly bereaved by the loss of our Queen.

“Now, more than ever, grateful that our nation’s figurehead is not a business politician or president who sells our collective well-being for their profit. God bless Elizabeth II. Long live King Charles III.’

Alison Moyet, 61, is taking a break from Twitter after being tricked by anti-monarchists for saying she liked The Queen (Picture: Alison Moyet with her MBE donated by the Princess Royal at Windsor Castle on March 30) 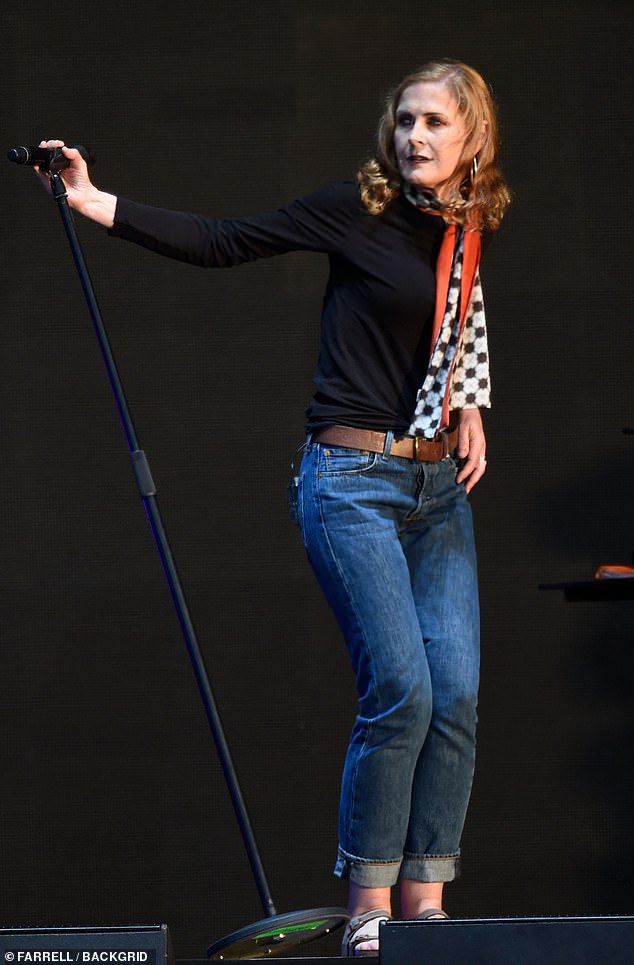 Moyet is an outspoken voice on Twitter, known for her witty conversation with followers 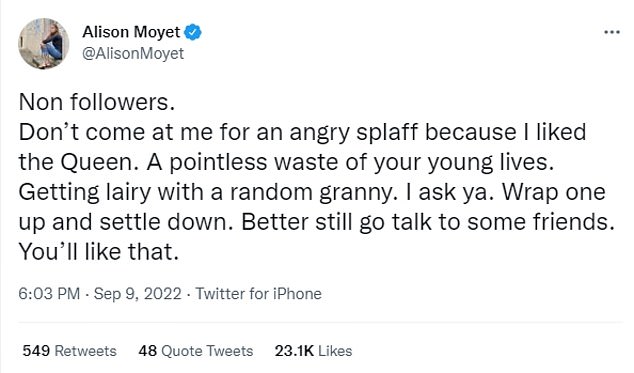 After receiving abuse online, Moyet wrote, “Don’t come to me for an angry splatf because I liked the Queen. A pointless waste of your young life. Lairy be with a random grandma’ 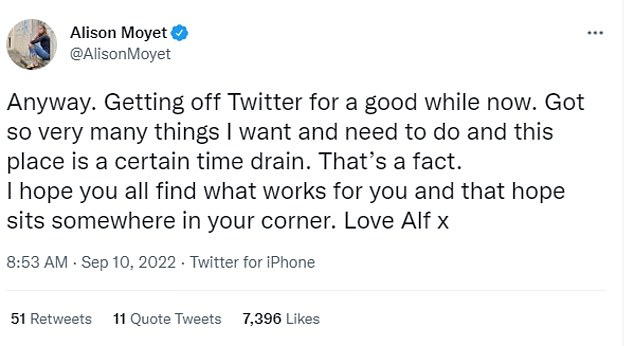 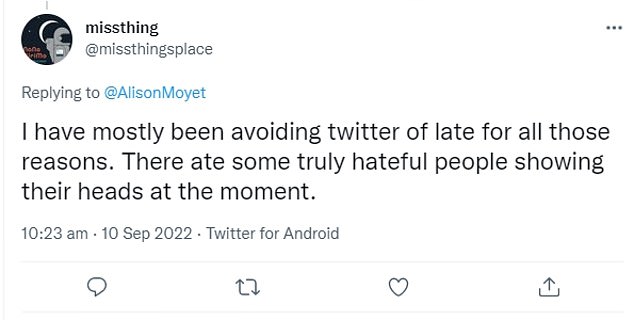 She gained sympathy from followers on Twitter, who pointed out that there were some ‘really hateful people’ on the platform

The post received a deluge of angry responses, prompting Moyet to shut down all comments.

But some angry commentators still responded to Moyet’s follow-up posts.

Dan Wieland wrote: “Your tweet landed on my home screen, how about keeping unpopular or controversial opinions to yourself if you don’t want anyone to come to you?”

Another post retweeted a video in which The Cure’s Robert Smith shared why he felt the UK should abolish the monarchy.

Moyet wrote: ‘Don’t come to me for an angry splatter because I liked the queen. A pointless waste of your young life. Getting lair with a random grandma. 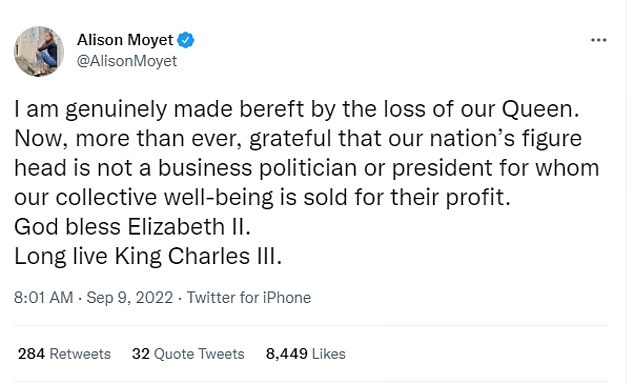 In her original post, Moyet tweeted: “I am truly bereaved by the loss of our Queen. Now, more than ever, grateful that our nation’s figurehead is not a business politician or president to whom our collective well-being is sold for their profit.” 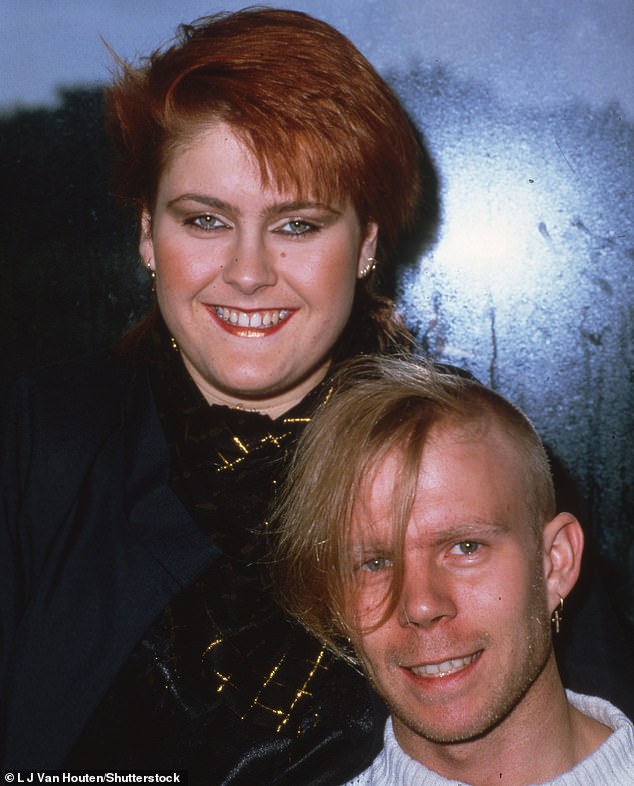 ‘Anyway. Been off Twitter for a while. I have so many things I want and need to do and this place needs a certain amount of time. That’s a fact. I hope you all find what works for you and that hope lies somewhere in your corner. Love Alf x’

Stephen Clark replied, ‘Sorry you’re going, Alf. one of the great voices in a place that is unfortunately all too often a cesspool of snarl and negativity.’

Grantus67 tweeted: “The problem is that some people don’t respect your own beliefs and can be very disrespectful and hateful.”

Max Eldin-Taylor added: “I agree with the sentiment, Twitter can be like a black hole for energy and positivity.”

Moyet previously took a break from Twitter in July 2018 after tweeting that she objected to being called a “cisgender” woman and received angry comments from trans rights activists.