All aboard for the Broads: the joys of exploring Norfolk’s tranquil waterways 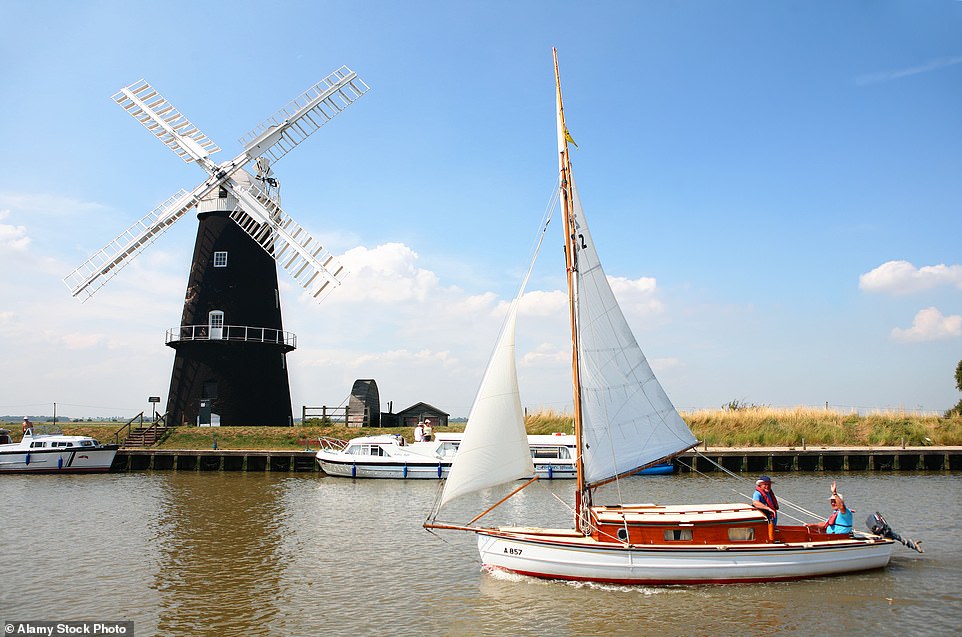 Not many holidays require emergency assistance within the first 24 hours, but our sailing holiday on the Norfolk Broads is special in many ways.

One moment we are sailing in our rented motor cruiser. Moments later… clunk! Our boat stops on an ominous slope. I race to the top deck with my daughter Hannah (16) and son Gabriel (18).

“We’re stuck,” says my husband, Marc, looking sheepish. We are stranded on a sandbar, warning buoys misinterpreted. No backing up or pushing can shift us, so I pick the Broads equivalent of 999.

Jo Kessel and her family rent a boat and explore the 200-mile seven-river network of calm, navigable waterways of the Norfolk Broads. Along the way, they spy on the ‘showstopping’ Berney Arms windmill (above, file photo) 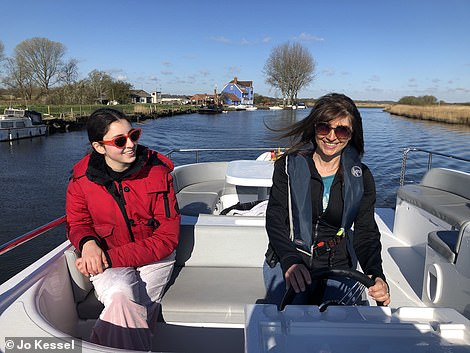 Pictured is Jo and her daughter Hannah aboard their rental boat – an eight-berth, 42-foot pleasure craft

So far the journey has been smooth sailing. In Brundall, near Norwich, we had picked up our rental boat – an eight-berth, 42ft pleasure craft that got in plenty without feeling cramped, including three bedrooms, three bathrooms and a well-equipped galley kitchen.

Skipper Gareth supervised a test drive and then declared us fit to go. Little did he know…

No one felt like cooking, so after exploring east for a while, we docked for the night outside a thatched-roof tavern where we headed for drinks and burgers.

In the morning we were greeted by swans gliding about and a sunrise so strong that the river steamed and twinkled under its radiance.

This 200-mile, seven-river network of calm, navigable waterways is split into north and south (we’re in the latter) and crisscrossed by swamps and farmland. Otters thrive and birds are melodious.

Over eights are allowed to drive, so as we drive along the River Yare again, we take turns, spotting geese, ducks and countless species unknown to us. When a flock of swans take flight in formation, their wingspan and speed make them look more like light aircraft than birds. 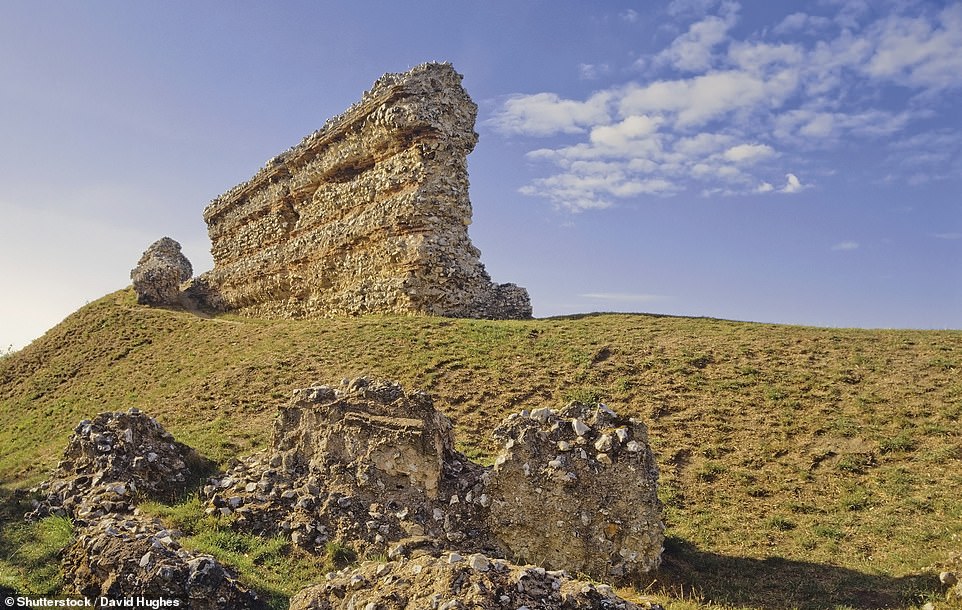 Jo and her family stop for a picnic next to the ancient flint walls of Burgh Castle, pictured, on the edge of the River Waveney

The swans are a distraction, but they are not responsible for the events that lead to my SOS call a few minutes later. The lady who answers the phone assures me that help is on the way and I apologize for our idiocy. “If it makes you feel better,” she says, “this happens to about 250 people a year.”

Redding arrives within minutes in the form of a Broads ranger, who tilts sharply to create a massive wave that he hopes will drive us off. If that doesn’t work, he calls in the cavalry: a tugboat.

Despite being a quarter the size of our motor cruiser, it frees us up in seconds. We thank our rescuers profusely and move on. 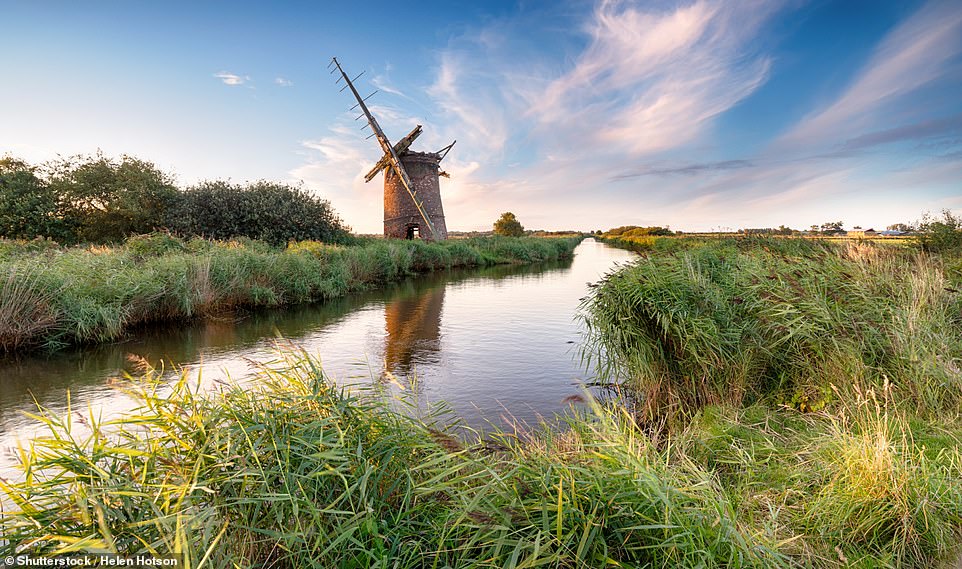 There are windmills ‘at every bend’ of the waterways of the Norfolk Broads, ‘most built in the late 1800s to drain the swamp water’. Above is the Brograve windmill in the area

Burgh Castle is where we went, the site of a 3rd century Roman fort on the edge of the River Waveney and on Angles Way, a 150 mile footpath running from Great Yarmouth to Thetford. We dock and climb to the remains of the fortress, then picnic next to the ancient flint walls.

From here, binoculars help identify peacock butterflies fluttering from hedgerows, and orange-billed oystercatchers by the water.

The great thing about driving your own craft is that you can stop wherever and whenever you want. That evening we dock at Reedham’s South Broads hub and head for the chippy.

With a 5mph speed limit on the water, this is life in the slow lane. Passers-by wave. It’s all smiles.

Especially the windmills are fascinating. They were built at every turn and most in the late 1800s to drain the swamp water.

Berney Arms is one of the showstoppers, but Hardley Mill has been fully restored and you can climb to the top. Built in 1874, the 43 ft mill leans like the tower of Pisa and although the steps are a bit rickety, it’s worth it for the view.

The trip ends with a barbecue rib lunch at a bustling waterfront pub. Our table is the perfect vantage point to watch other skippers dock. Turns out we’re not such bad drivers after all.

Did you think Emirates first class couldn’t get more chic? Now passengers can…

The world’s most magical forests revealed in stunning new book, from California…

Reims for under £100 a night: a budget guide to the capital of the Champagne region

According to Tripadvisor, Colombia and Mykonos are the places Brits want to visit…

When Britannia ruled the RAILS: Book reveals how Britain exported the railway around…

Did you think Emirates first class…

The world’s most magical forests…