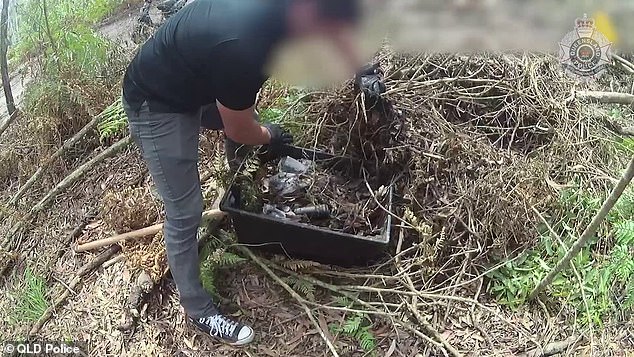 Police have arrested six alleged bike gang associates and their alleged leader after discovering 13kg of dangerous drugs and firearms hidden in piles of green waste.

Officers filed more than 50 drug, weapons and burglary charges on Friday after the raid on a South Brisbane home on Holloway Road in Chambers Flat.

Footage shows detectives from Ipswich and the Organized Crime Gangs Group searching through piles of branches and clearing caches full of weapons and drugs.

Queensland police detectives from Ipswich and the Organized Crime Gangs Group raided a home in Chambers Flat on Friday (pictured, an officer removing a cache hidden in green waste)

Queensland Police say they found over a kilogram of methylamphetamine, 12kg of cannabis, seven firearms, ammunition, about $50,000 in counterfeit money and two stolen cars.

They also allegedly found evidence of cannabis cultivation chambers and dismantled amphetamine labs on the property.

The raid was carried out as part of Operation Uniform Neo, which was launched in August after several firearms were allegedly stolen from a residence in Ottaba, 75 miles north of Chambers Flat. 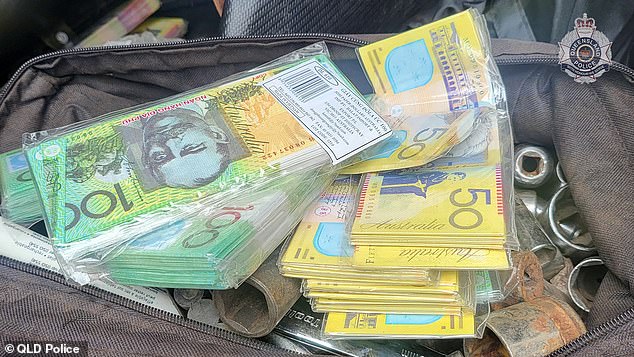 Queensland Police have reportedly found over a kilo of methylamphetamine, 12kg of cannabis, seven firearms, ammunition, about $50,000 in counterfeit money (above) and two stolen cars

A 39-year-old man from Victoria Point was arrested after the raid and charged with possession and production of dangerous drugs, illegal possession of weapons, possession of explosives and receipt of tainted firearms and ammunition property.

Police claim he is the leader of the Logan branch of the rebel gang.

He is due to appear before the Southport Magistrates Court on Monday.

A 50-year-old man from Chambers Flat and a 35-year-old woman from Brisbane were also arrested and are facing similar charges. 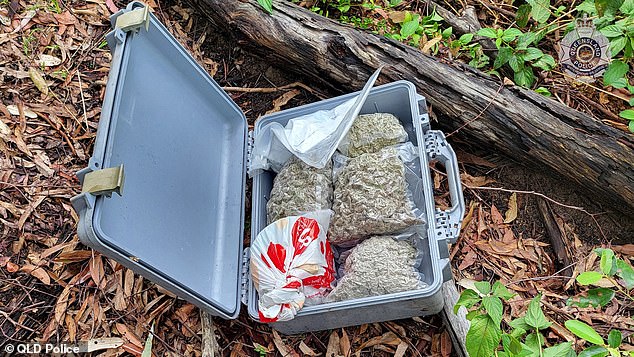 An alleged rebel leader of a bicycle gang, six men and a woman are now facing a total of 50 charges after the raid (photo, cannabis reportedly found in the property)

They will appear before the Southport Magistrates Court on October 12.

The three are facing a total of 31 charges.

The 48-year-old Moores Pocket man, the 36-year-old Bethania man and the 27-year-old Mansfield will stand before the Ipswich Magistrates Court from September 27 to November 11, while the 38-year-old Browns Plains man will appear in Beenleigh Magistrates. to appear. Court.

An Inside Look at the Devastation of Hurricane Fiona

Brisbane Airport arrest: man, 30, returns from abroad, posed as a teenager to tend to…