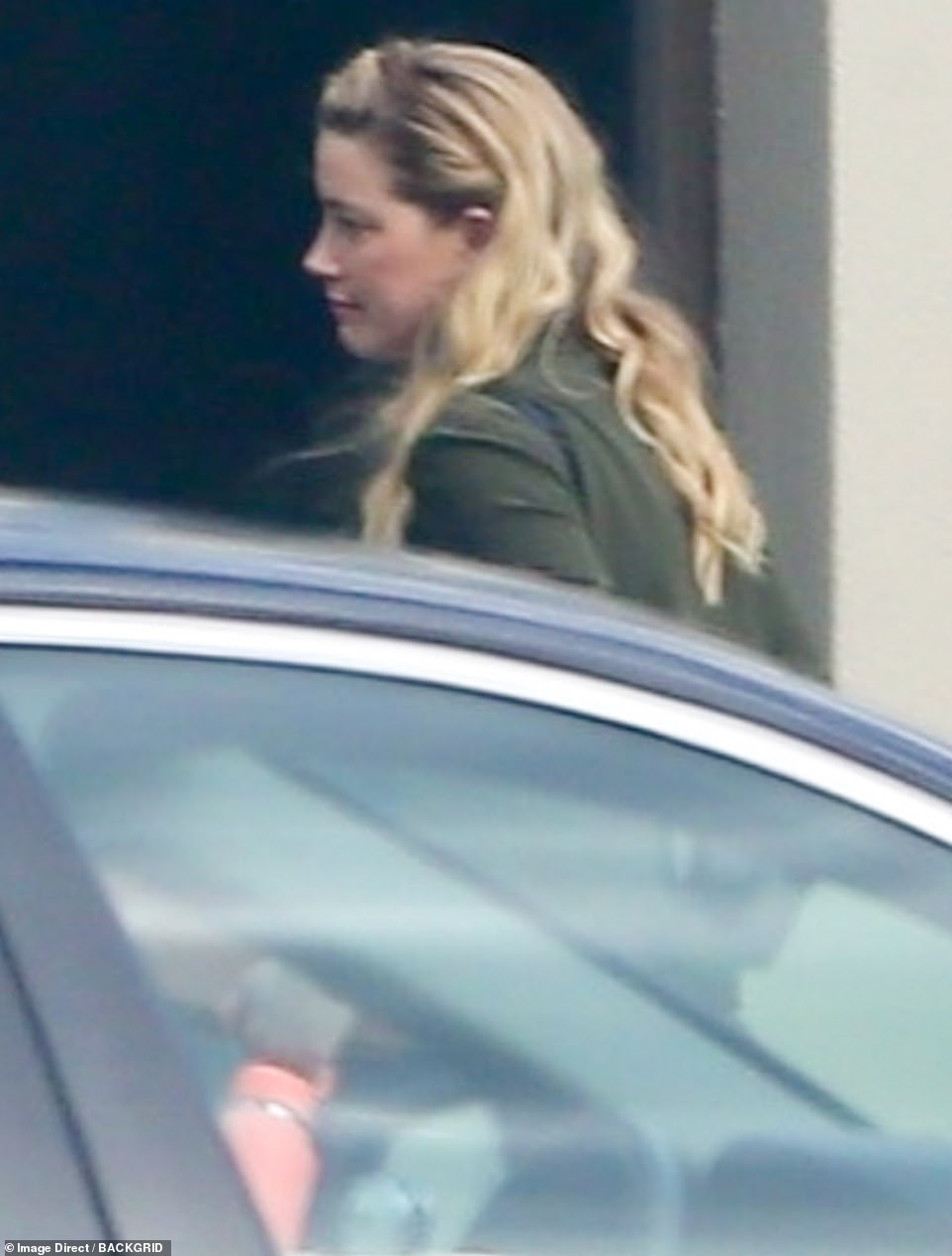 Amber Heard has been pictured for the first time since she lost her defamation trial against ex-husband Johnny Depp, with the actress seen flying into New York City for the day on a private jet – despite her attorneys insisting that she cannot afford the $8 million damages she has been ordered to pay the actor.

The 36-year-old Aquaman star was joined by her sister Whitney and her assistant for the trip, which appears to have lasted for just a few hours before she returned to Washington, D.C., once again boarding a private plane for the journey.

Heard has remained very much under the radar since she appeared in court to hear the judge read out the jury’s verdict in her and Depp’s bitter trial – a ruling that saw the actor winning all three of his defamation claims against his ex-wife, who, in turn, won just one of her three countersuits.

This week, two of his attorneys, Camille Vasquez and Benjamin Chew, both of whom earned celebrity status during the trial, said that Depp may well waive his ex-wife’s payment after her legal team insisted that she cannot afford it and would be appealing the verdict.

Amber Heard has been seen for the first time since she was ordered to pay her ex-husband Johnny Depp $10.35 million in damages after a court ruled that she defamed him in a Washington Post op-ed about sexual assault 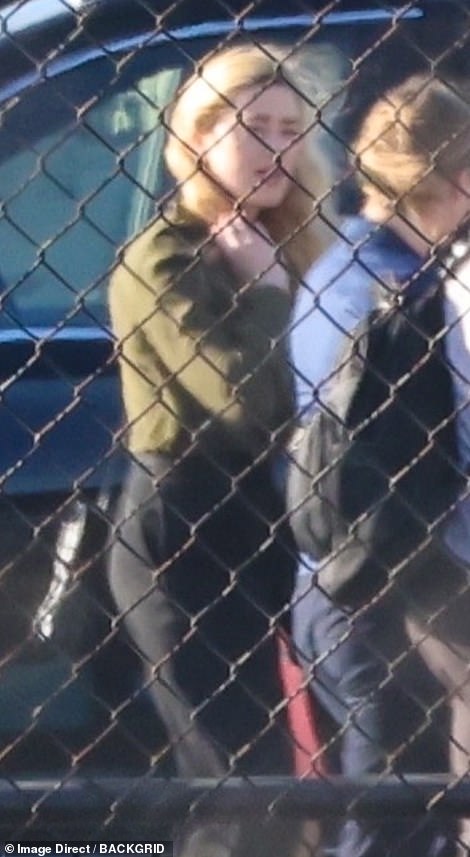 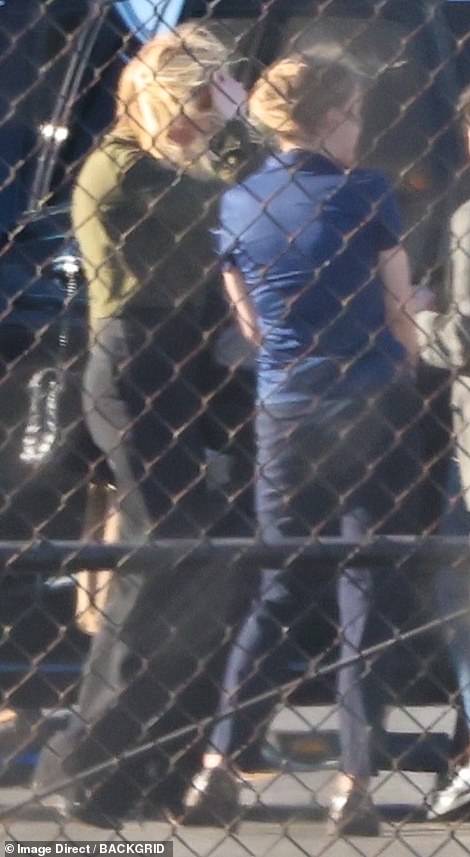 The 36-year-old actress traveled to New York City from Washington, D.C. on Thursday via private jet. Her trip on the private plane comes just days after her legal team insisted she could not afford to pay damages to her ex-spouse 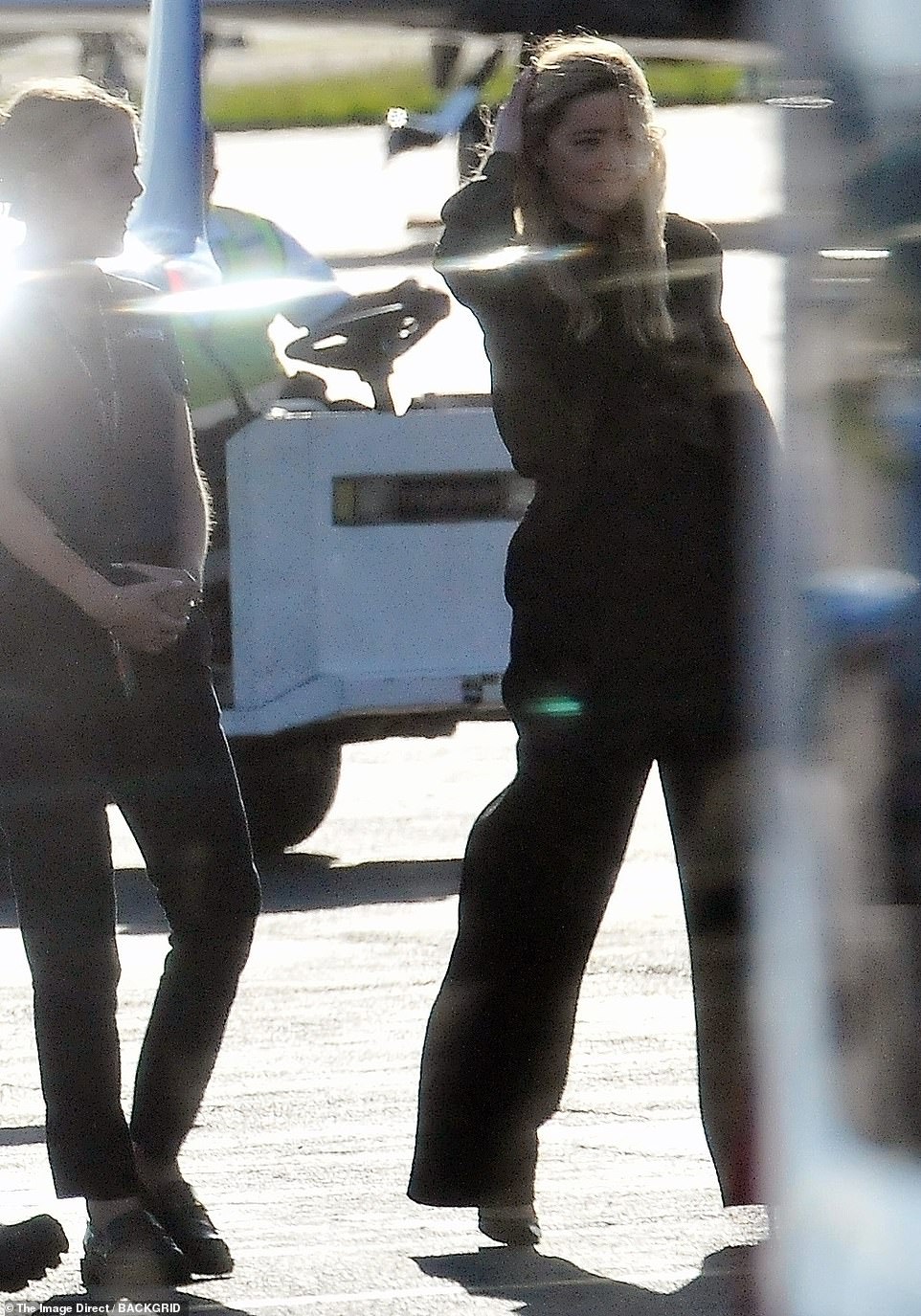 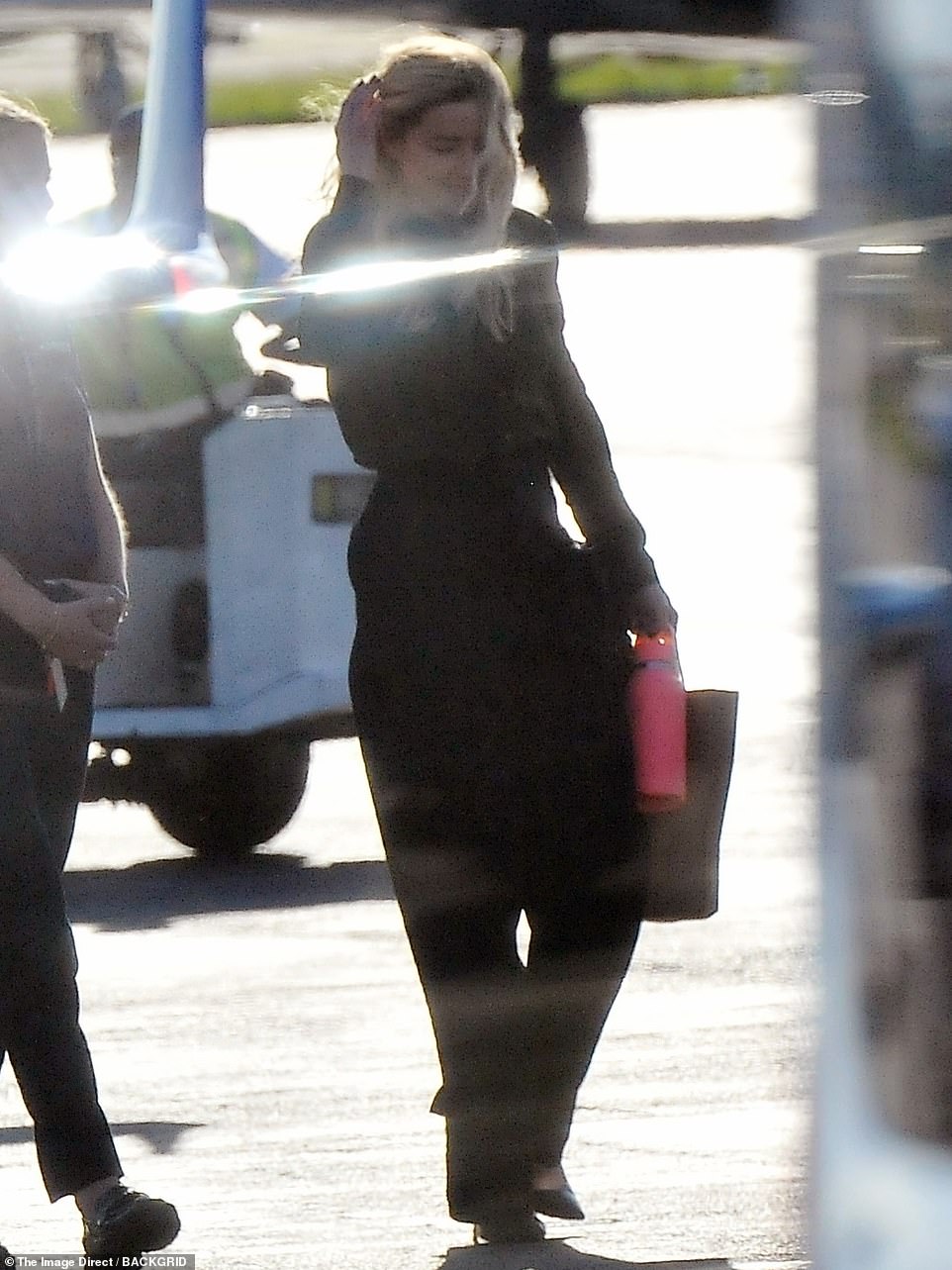 The Aquaman star put on a chic display in a khaki green blouse and black trousers, which she teamed with black high heels and a $2,890 YSL handbag. Her elegant ensemble suggests she was in New York for a professional engagement of some kind

It is not known what the purpose of Heard’s trip to New York was, however she was dressed to the nines for her quick visit to the Big Apple, donning a khaki green button-down shirt, black trousers and high heels.

Her blonde hair was styled in glamorous waves and she toted a $2,890 YSL handbag and a bright orange water bottle as she disembarked her private jet alongside her sister, who was by her side for much of the trial.

Images show her walking through the city’s Flatiron neighborhood with a team of people, including members of security, who joined her for the entirety of the trip. It seems the visit may have been a professional one, given that the actress was seen exiting a car at private airport Teteboro with a folder of documents in hand.

Heard could well have traveled to New York in order to conduct an interview with one of the major networks; both her legal team and Depp’s have made on-screen appearances in the weeks since the trial concluded – however neither the actress or the actor have yet done a sit-down.

On Wednesday, one day before Heard was finally seen out in public, Depp’s lawyers appeared on the Today show, Good Morning America, and Law & Crime Network to speak out about the case – while Vasquez then conducted another interview with People magazine, which was published on Thursday.

Speaking to the outlet, Vasquez spoke of her client as a ‘friend’, while slamming rumors of a romance between the two of them as ‘sexist’ and ‘disappointing’.

‘I guess it comes with the territory of being a woman just doing her job… It’s disappointing that certain outlets said that my interactions with Johnny – who is a friend I’ve known and represented for four-and-a-half years now – in any way were inappropriate or unprofessional,’ she said. ‘That’s disappointing to hear. 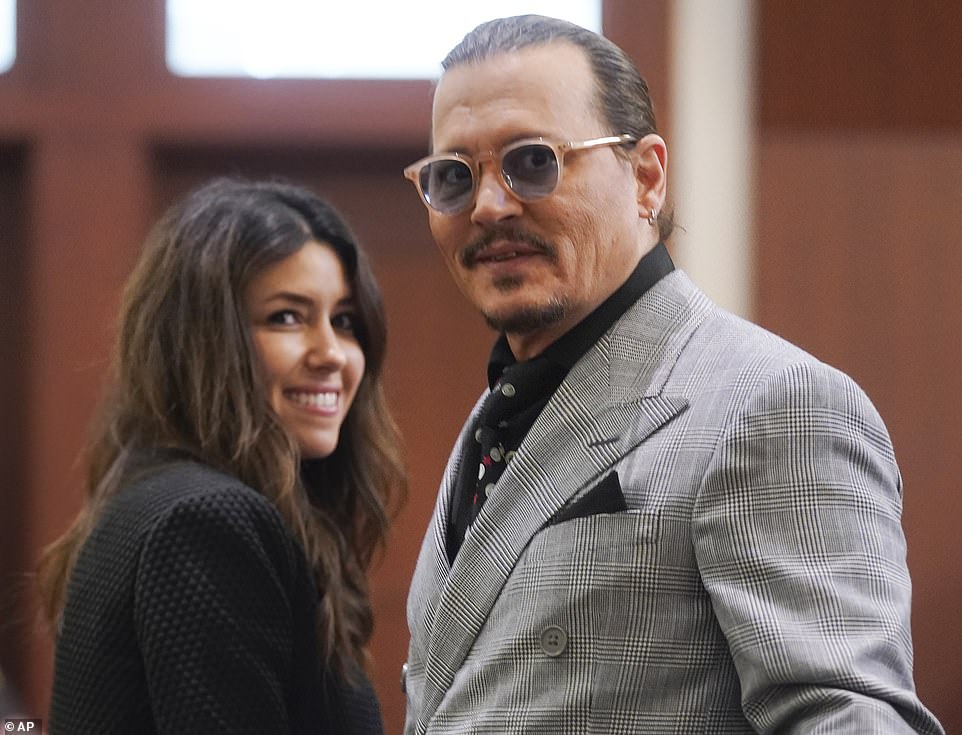 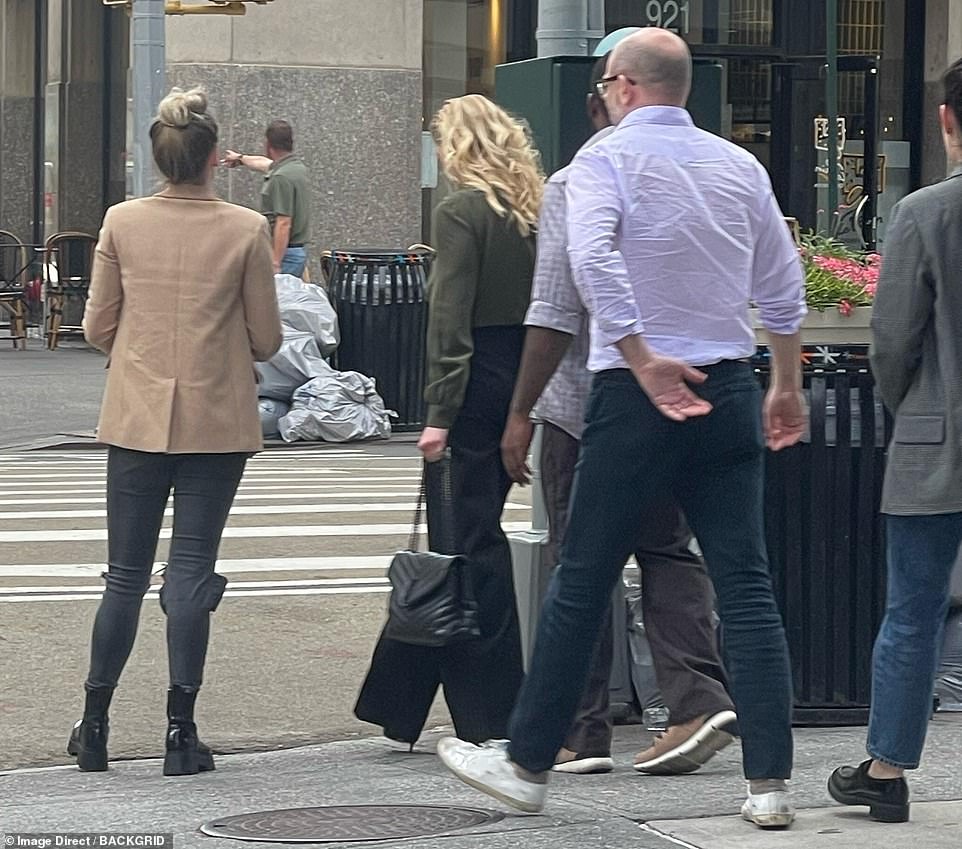 Earlier this week, Vasquez and her colleague Benjamin Chew also slammed claims made by Heard (seen walking through New York City on Thursday) that the trial was unfair because Depp is more powerful and popular than she is 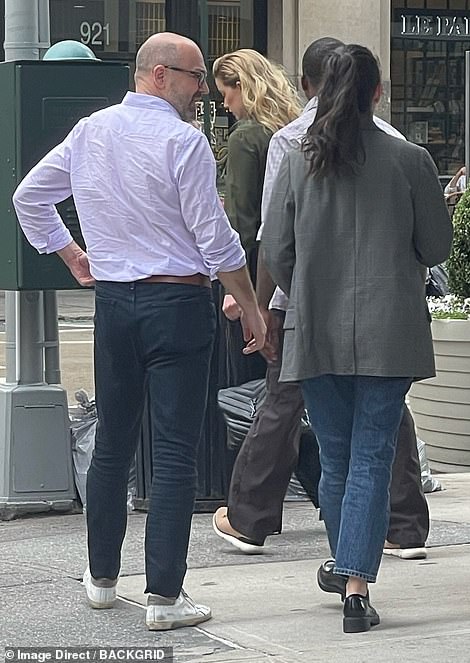 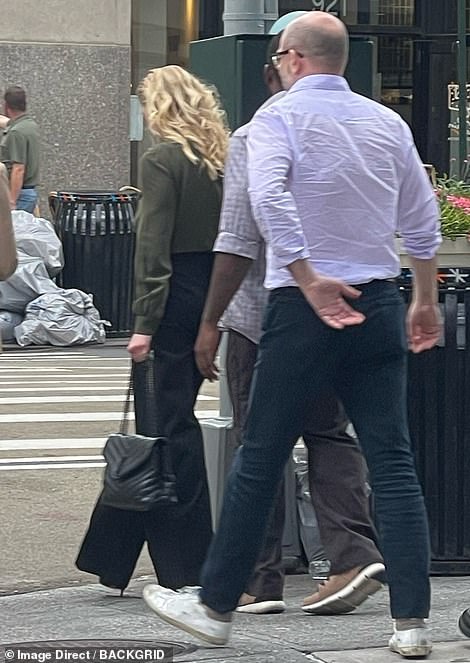 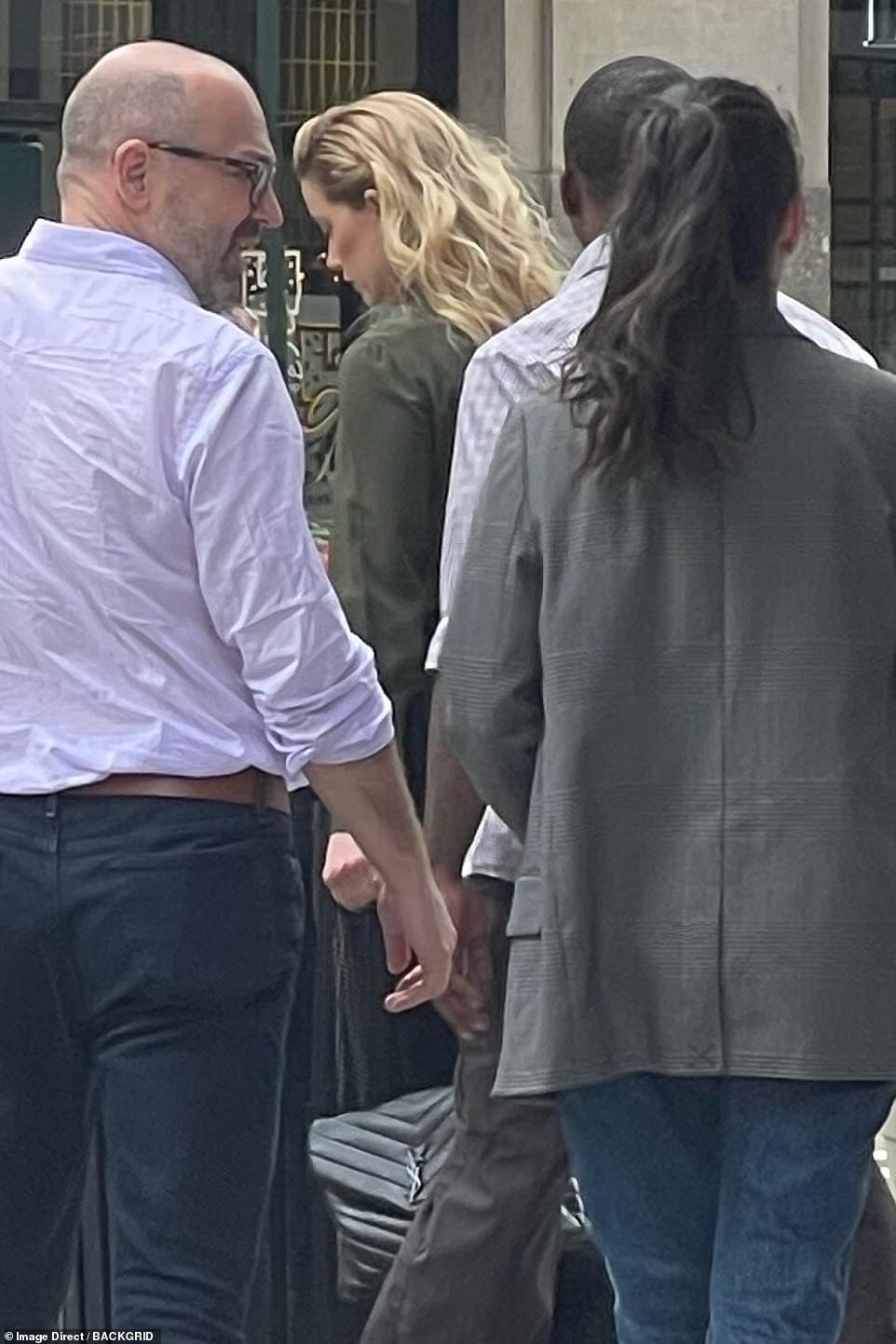 The actress, seen center, was accompanied by a team of people, including security guards, as she made her way around the city on Thursday 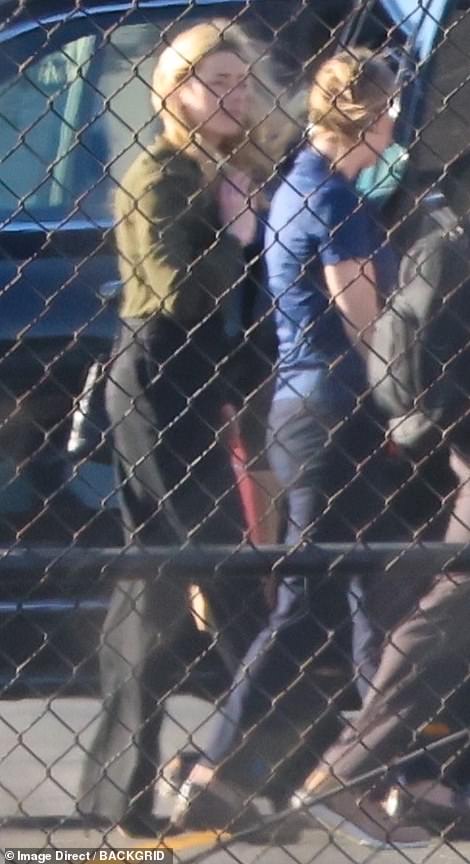 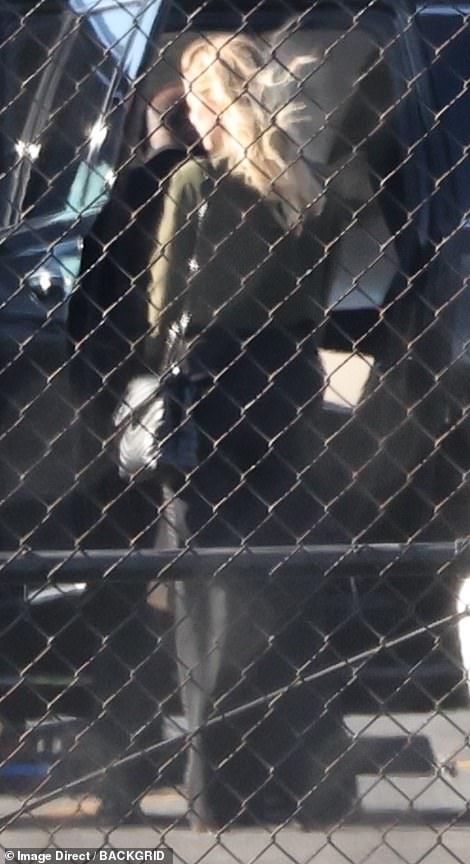 The actress’ legal team has said that they plan to appeal the verdict, which requires Heard to pay $8.35 million to her former spouse – after deducting the $2 million in compensatory damages that he was ordered to pay her 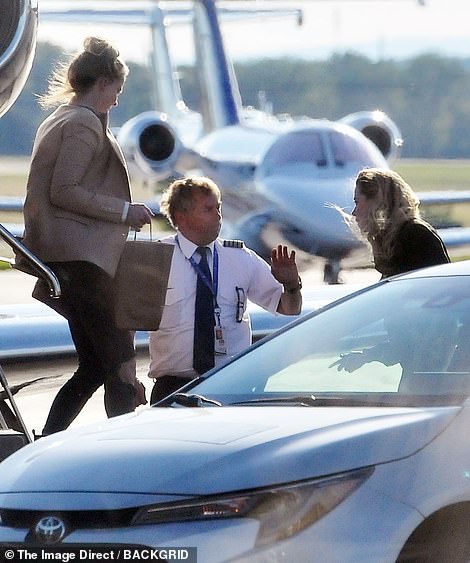 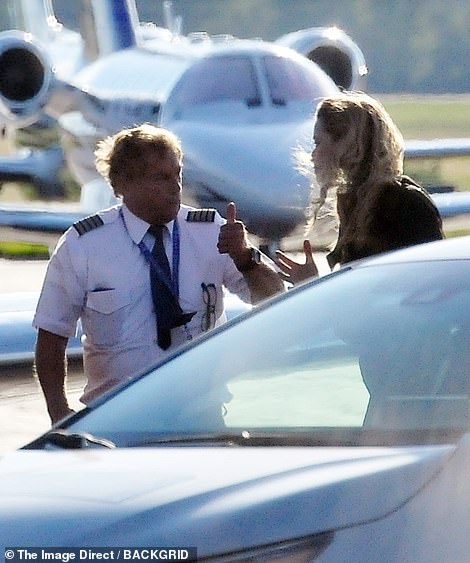 Heard was seen speaking to the pilot after disembarking the plane with her sister Whitney, who accompanied the actress to much of her trial

‘It’s also an unethical charge being made. It’s sexist. It’s unfortunate and it’s disappointing, but at the same time it kind of comes with the territory. I can’t say I was all that surprised.’

She added that her close and very tactile relationship with Depp in court – which first sparked the rumors of a romance on social media – were the result of her ‘close’ bond with him as a ‘client’.

‘And, I’m Cuban and Colombian. I’m tactile. What do you want me to say? I hug everyone. And I’m not ashamed about that,’ she continued.

Vasquez – who is dating British WeWork executive Edward Owen, 38 – also insisted that she is ‘very happy in her relationship’.

The lawyer became something of a star during the trial – after which she received a promotion to partner – particularly for her ferocious cross-examination of Heard, who later blasted the verdict as a ‘setback for other women’.

‘The disappointment I feel today is beyond words. I’m heartbroken that the mountain of evidence still was not enough to stand up to the disproportionate power, influence, and sway of my ex-husband,’ Heard said in a statement shared just minutes after the verdict was read out in court, where she was present for the judgement, while Depp was said 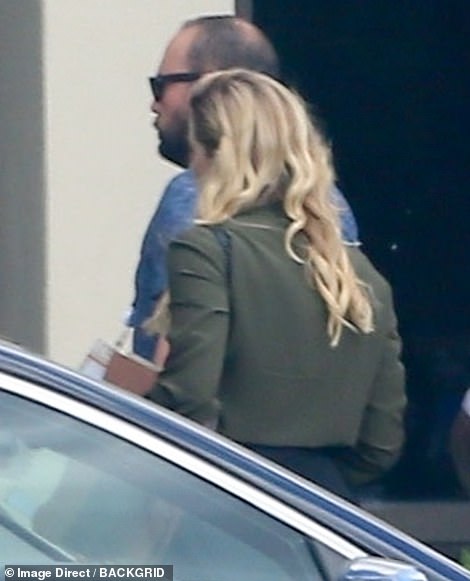 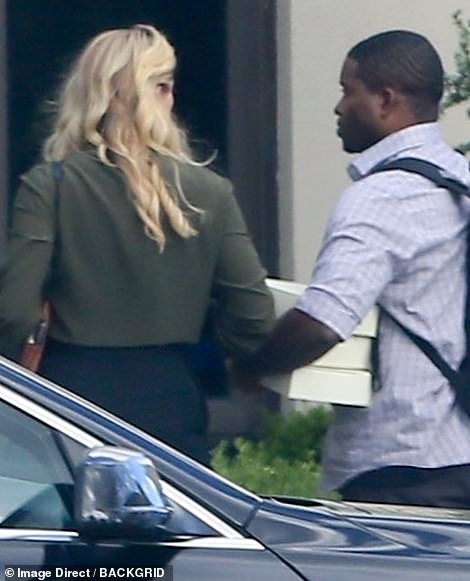 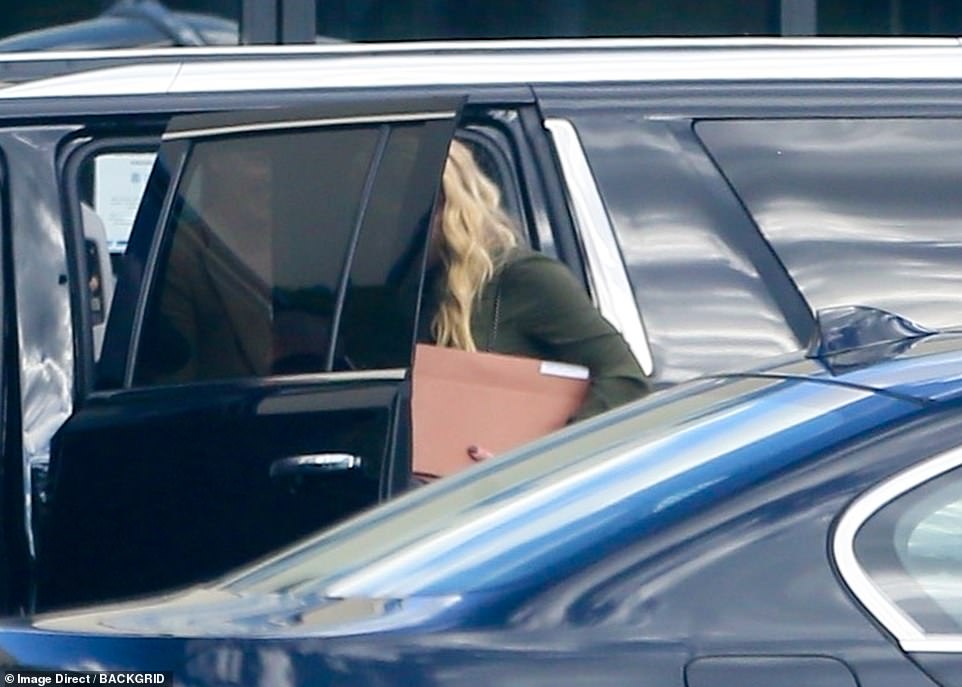 She had a large document envelope in her hand as she climbed out of her car at the private airport, which is located in New Jersey, about an hour’s drive from the city 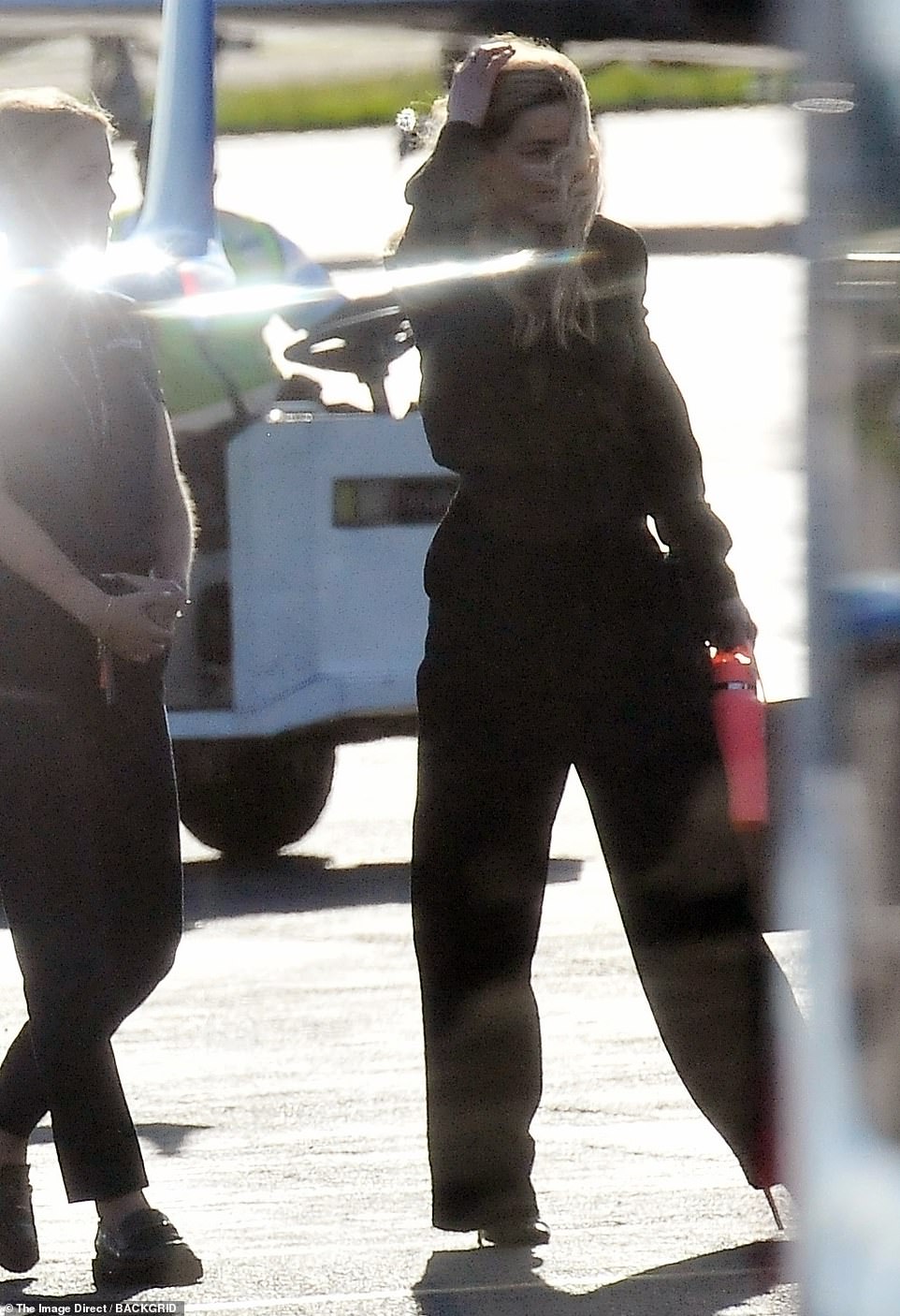 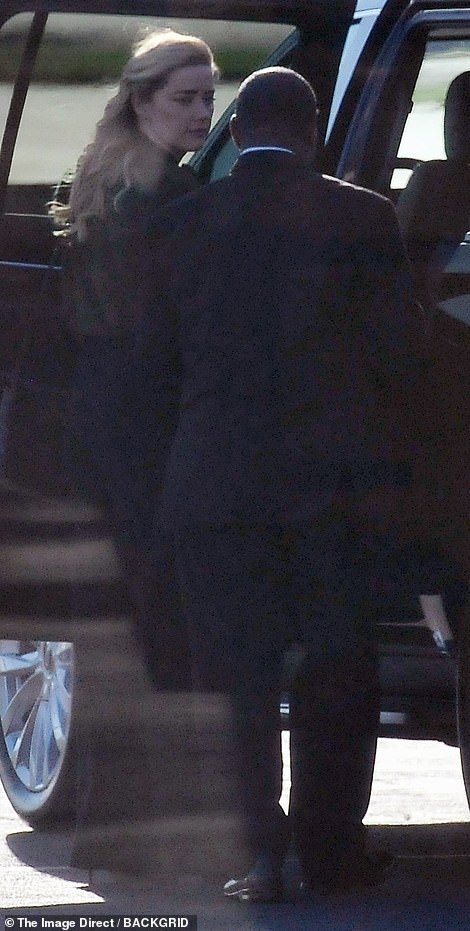 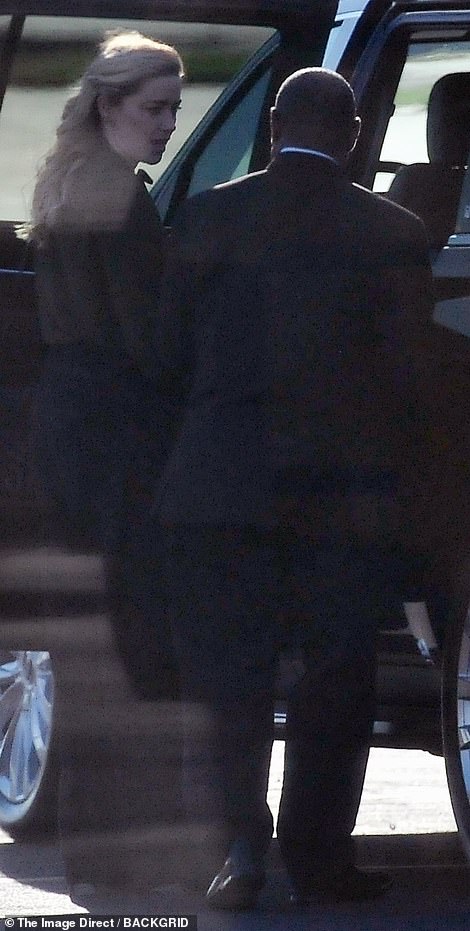 The day after the ruling was handed down, Heard’s lawyer Elaine Charlson Bredhoft revealed that her client was planning to appeal the verdict, insisting that she had ‘excellent grounds’ to do so, while claiming that the actress is unable to pay the $8.35 million in damages that she owes Depp.

During an appearance on the Today show, Bredhoft was asked if the Aquaman actress would be able to pay the damages she owes Depp after a jury vindicated his claims that she lied by accusing him of abuse during their marriage, to which she replied: ‘No, absolutely not.’

The lawyer also echoed her client’s thoughts on the verdict, blasting it as a ‘significant setback’ for women.

‘It’s a horrible message. It’s a setback, a significant setback because that’s exactly what it means,’ Bredhoft said of the verdict.

‘Unless you pull out your phone and you video your spouse or your significant other beating you, effectively, you won’t be believed.’

She also suggested that the jury in the case had been swayed by public opinion – including social media posts that were shared in support of Depp – a claim that his legal team has since slammed as ‘utterly false’.

To be granted an appeal, Heard would likely need to demonstrate that there were errors in the trial, or in the presiding judge’s reading of the law. 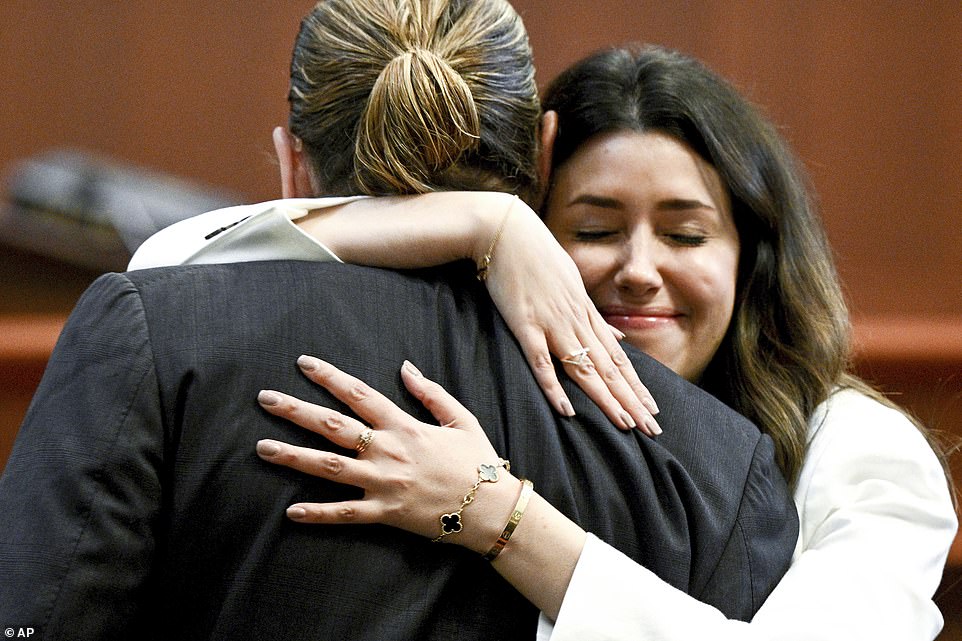 On the same day that Heard traveled to New York, Depp’s lawyer Vasquez told People magazine that her tactile displays of affection with Depp in court were a result of her Cuban and Colombian heritage 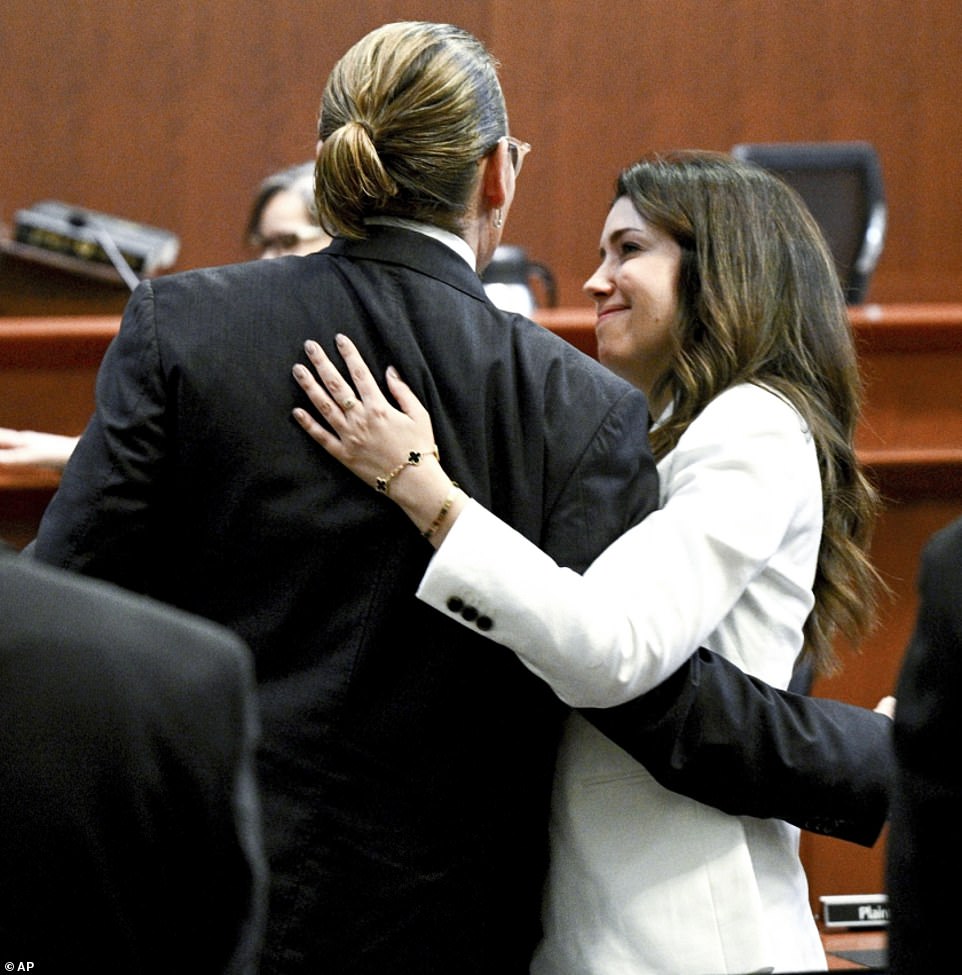 Vasquez (pictured with Depp in court) added that she is ‘very happy in her relationship’ with British WeWork executive Edward Owen, 38, who she was spotted with shortly after the trial concluded

She would also need to post bond of the full $10,350,000, plus interest charges over the course of an appeal trial.

Depp originally sued Heard for $50million claiming that she defamed him with an op-ed piece published by the Washington Post in 2018 in which she claimed to be a survivor of domestic abuse.

Heard then countersued for $100million claiming that Depp’s lawyer Adam Waldman made defamatory statements by calling her claims a ‘hoax.’

During the marathon six-week trial in Fairfax, Virginia, which started on April 11 and concluded on June 1, Depp called 38 witnesses while Heard’s team called 24.

Both Depp and Heard gave evidence for four days each, including a forensic cross examination from the opposition lawyers – then both returned to the witness stand to testify a second time.

The jury saw dozens of texts, photos, videos, medical records and even pages from the former couple’s ‘Love Journal’ they hand wrote to each other.

The libel case was so complicated that the verdict sheet had 42 questions the jury had to answer before delivering the verdict: 24 questions for Depp’s claims and 18 for Heard’s counterclaim.

The court heard clips of recordings that Depp and Heard made during their arguments, some of their most intimate moments that were played back for the world years later in the most public setting imaginable.

The Bonell Family: Mother of 16 from Australia’s largest family welcomes yet…

American child crime specialist reveals what her children shouldn’t do