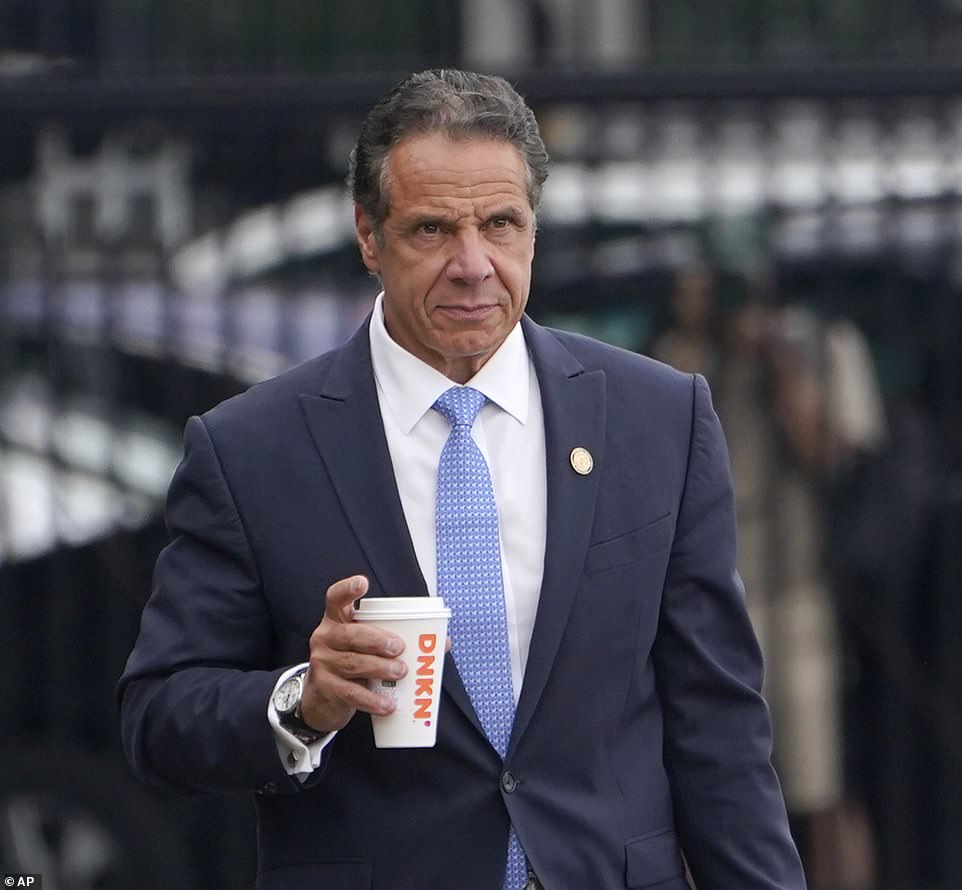 Disgraced former New York Governor Andrew Cuomo said he was ‘traumatized’ when President Joe Biden and other prominent Democrats did not stand by him during his sexual harassment scandal. Cuomo, 64, hinted a fresh run at governor in the coming years in an interview with the New York Post, where he blasted his old friends and seemingly makes a pass at his successor Kathy Hochul, also 64. When asked who stuck by him through the hellfire that saw him resignation after 11 years as governor, he answered: ‘Nobody.’ The worst betrayal, he said, was Biden, 79. Pictured: The former governor on the day he announced his resignation on August 10, 2021. 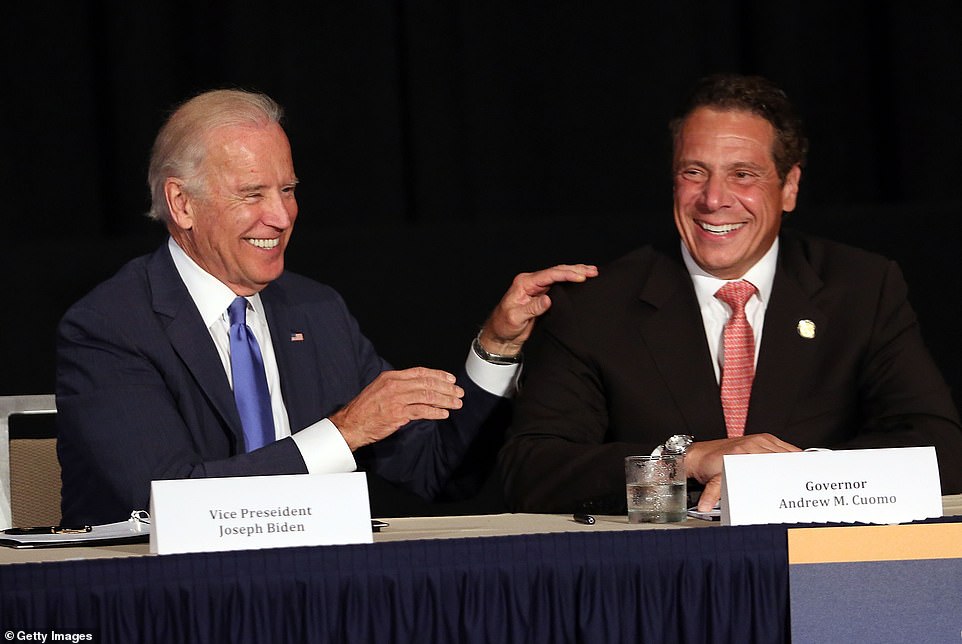 Cuomo continues:  ‘It was tough. Traumatizing. Biden, a friend 20 years, not knowing details, immediately said about me: “He’s got to go.” Biden had troubles years before and I stood by him. Gave him the benefit of the doubt. It was heartbreaking to see him trash me without reading one page, making one phone call.’ Pictured: Biden and Cuomo in 2015. 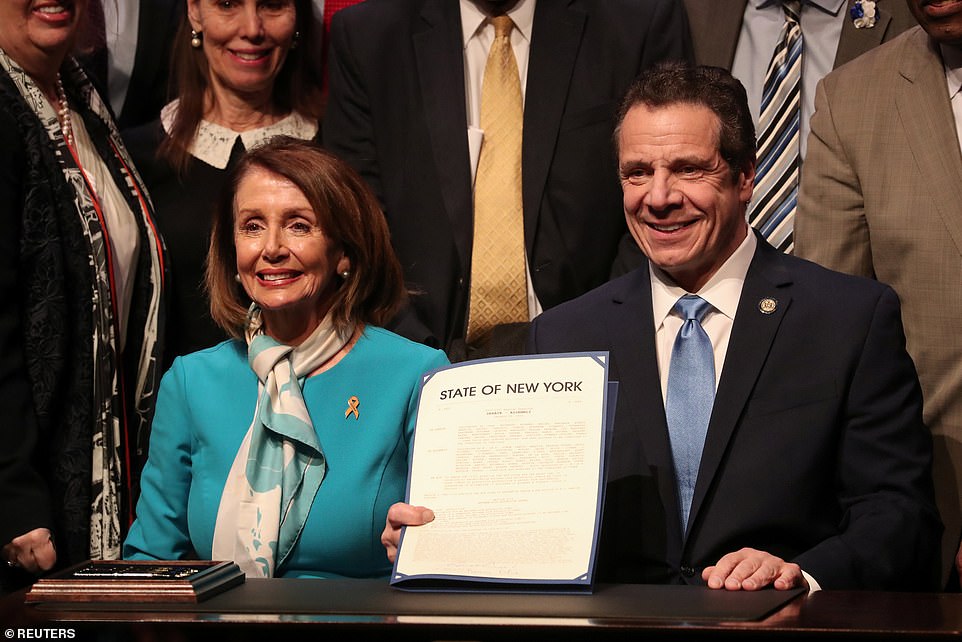 He also called out House Speaker Nancy Pelosi, former President Obama, Senate Majority Leader Chuck Schumer, and Senator Kirsten Gillibrand. ‘Pelosi, please. I know her 30 years. Her daughter worked for me. Obama? He’s been tough. When troubles come you like to think you’re different. You’re not. Enemies and haters accumulate. Schumer, Gillibrand, pals working in the state, friends I respected, fell like dominos.’ Pictured: Pelosi and Cuomo after signing the Red Flag bill in 2019. 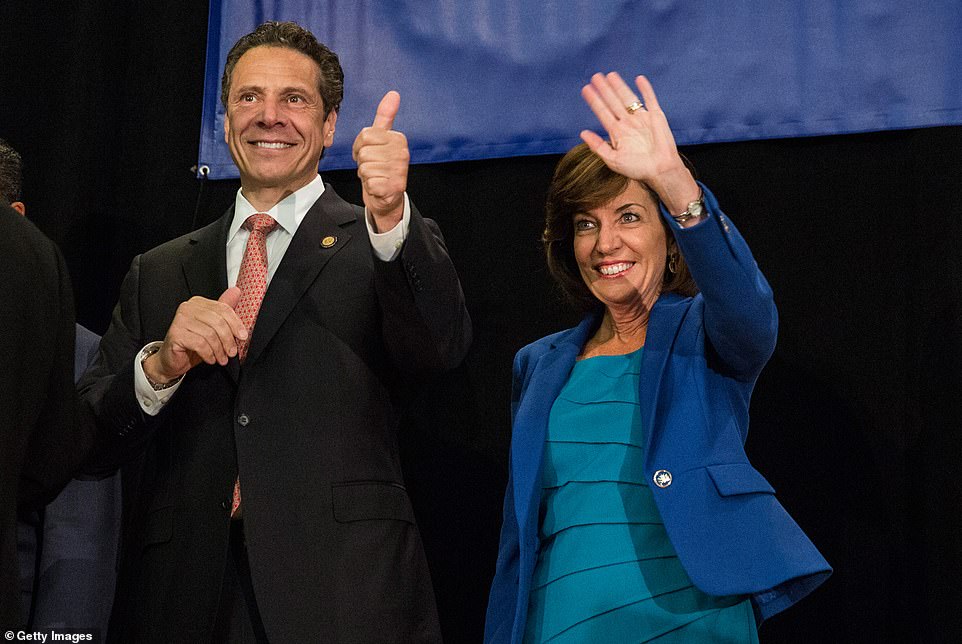 Cuomo adds: ‘Lose your power and heartless politicians read the tea leaves. You’re dead. Over. [Politicians] grab another piece of meat. The phrase “political friends” is an oxymoron.’ The Italian-American also took a swipe at Hochul (pictured together), calling the ‘well-meaning’ and ‘hardworking’ woman the ‘best alternative.’ In April, he slammed the current governor for ‘incompetence’ and ‘backdoor deals,’ citing the announcement of the $850million Buffalo Bills’ stadium deal that could directly benefit Hochul’s husband’s concession business. 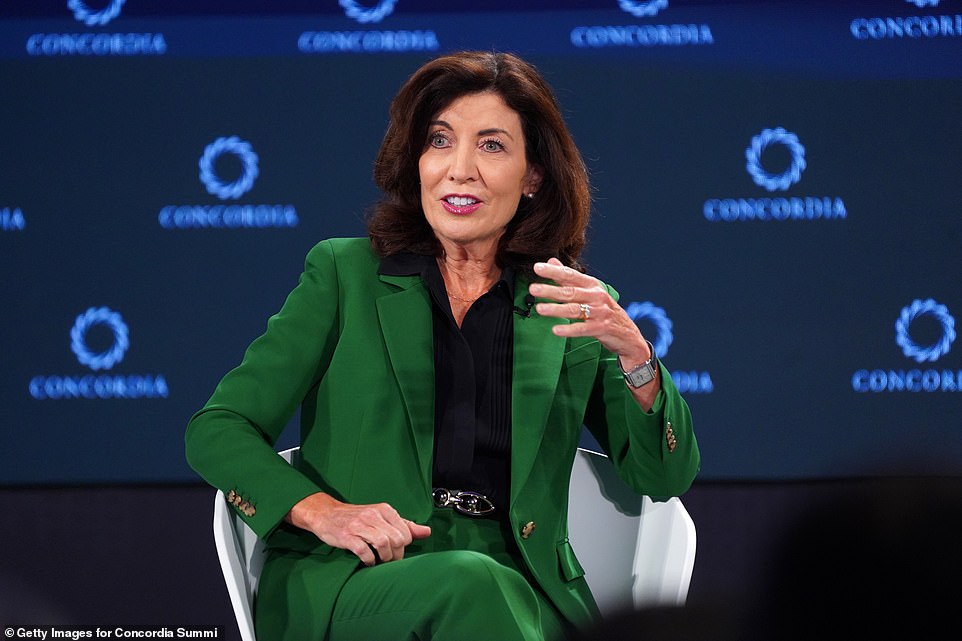 Much of the taxpayer-funded money for the Bill stadium will come from New York State and Erie County, which will contribute $850 million and $250 million, respectively, with the deal including a 30-year commitment from the team to stay in Buffalo. The Governor’s husband, Bill Hochul, is the senior vice president of a major food concessionaire at the Buffalo Bills’ Highmark Stadium. Despite, not being ‘warm and fuzzy,’ Cuomo doubled down that his reign over the Empire State was profitable because he ‘pushed to get things done.’ Pictured: New York Governor Hochul speaking at the Concordia Annual Summit earlier this week. 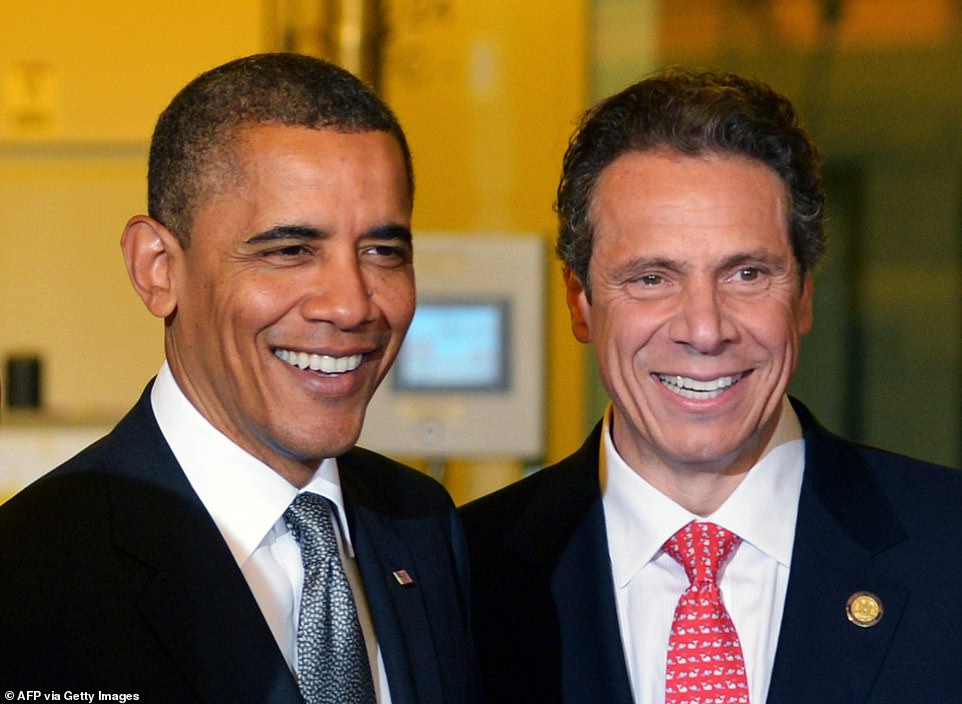 ‘I helped redo JFK and LaGuardia, Biden’s ‘Third World airport.’ I pushed the Second Avenue subway, which had been stalled 50 years. I helped bring in the Marriage Equality Act,’ he told the New York Post. ‘I focused on getting a job done — not socializing or going to parties. Aren’t leaders, legislators, regulators supposed to bring optimism, confidence? People are scared in mean, angry times.’ The former governor continues: ‘The ones we elect must stand for something. No excuses or hearing that we just can’t get things done. We’re elected to fight for people. And I was not willing to fail or give up.’ Pictured: Then-President Obama with Cuomo in 2012. 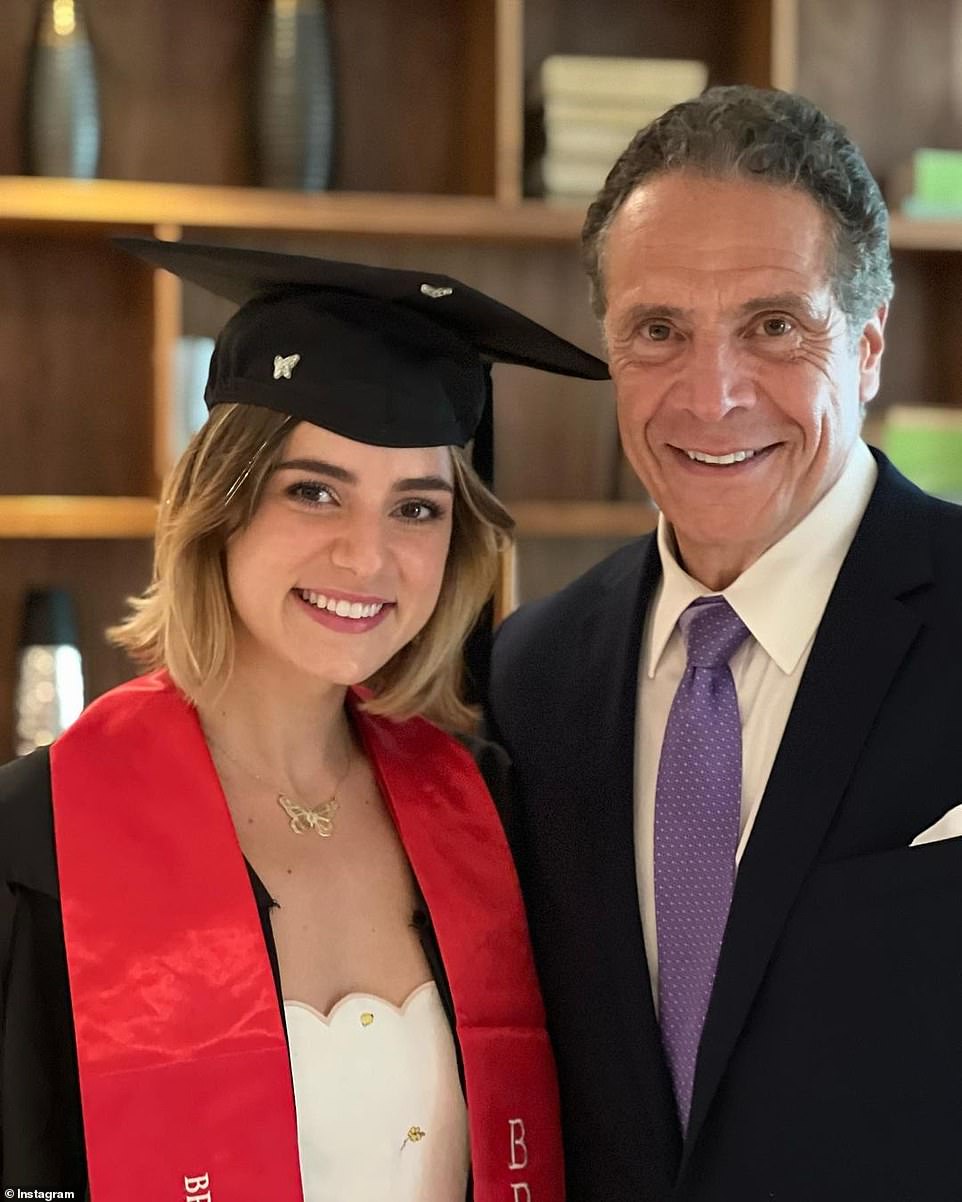 He went on to claim that he was ‘working seven days a week’ and ‘missed a lot of life’ as governor. In retrospect, he said he ‘should’ve been there more’ for his family. Cuomo fathered three daughters – Michaela (pictured together), Cara, and Mariah – with his ex-wife Kerry Kennedy, who he got a divorce from in 2005. The democrat is currently single and ‘available,’ he told the Post. 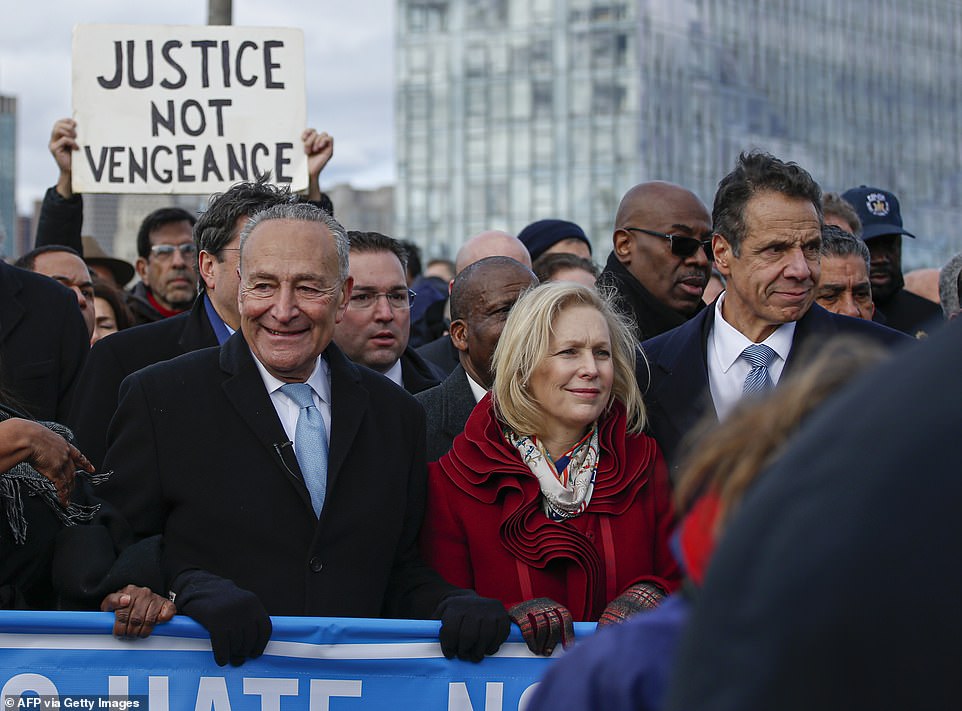 He also hinted at running again in few years because there are ‘no term limits, so I can make another go in four years.’ Cuomo said: ‘I’m someone who delivers. And who knows, could be there’s nobody to beat me. Also who knows – maybe by then I’ll be sweeter.’ Pictured: Senators Chuck Schumer and Kristen Gillibrand with the former governor in 2020. 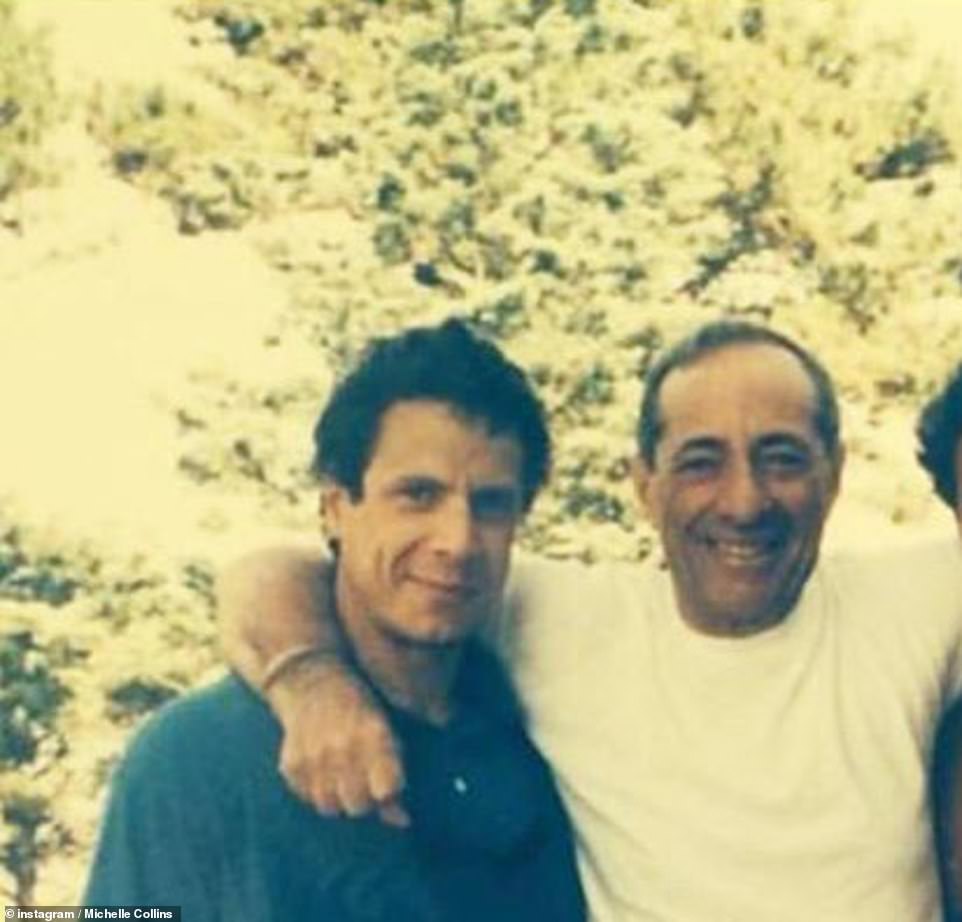 The disgraced politician then brought up his late father Mario Cuomo (right), also a former New York Governor – who served from 1983 and 1994 – saying that watching his father lose his governorship started his ‘duality.’ 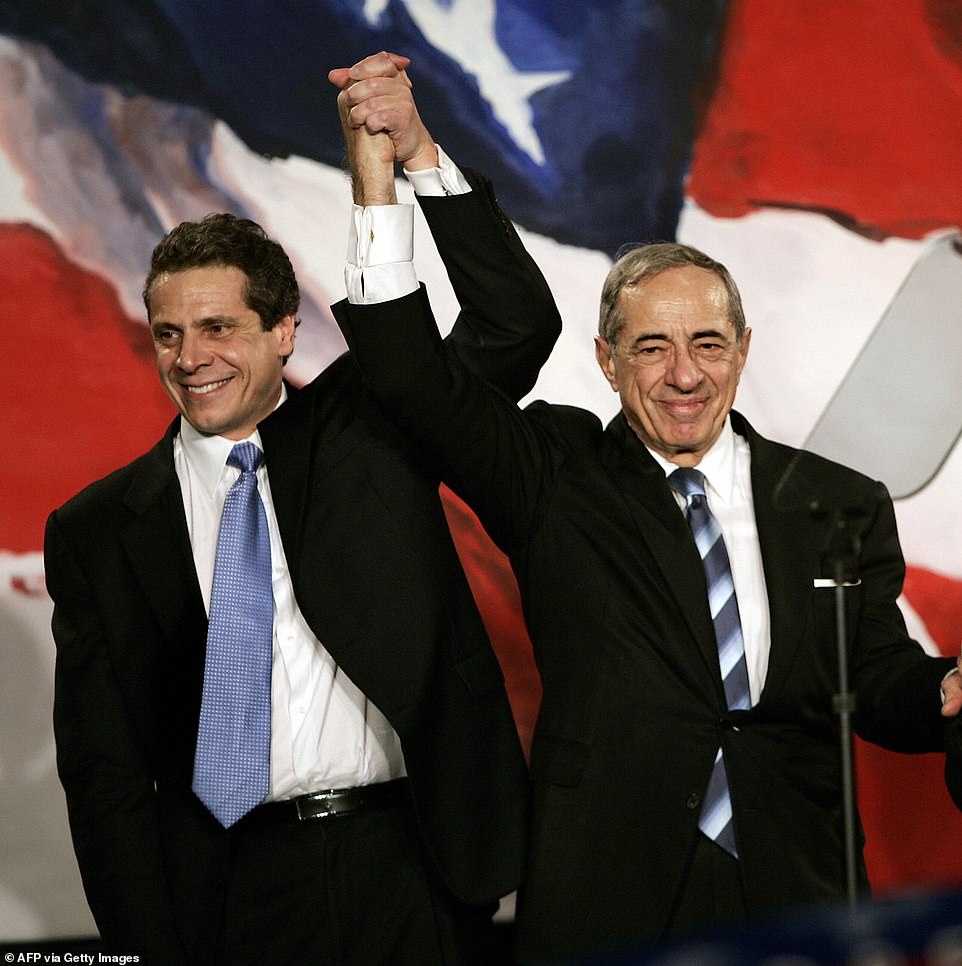 ‘I saw him hurt. His vulnerabilities exposed. They broke his heart,’ Cuomo told the New York Post. ‘The press next crucified me, his campaign manager kid. So I learned then not to expose a weakness or show your inner self. You know why? It gets used against you.’ Andrew says the reaction becomes ‘now we know where to hurt you.’ Though, he would go on to work for the Clinton administration before becoming entrenched in New York’s political sphere. Pictured: Andrew with his father Mario during a Democrat rally in 2006. 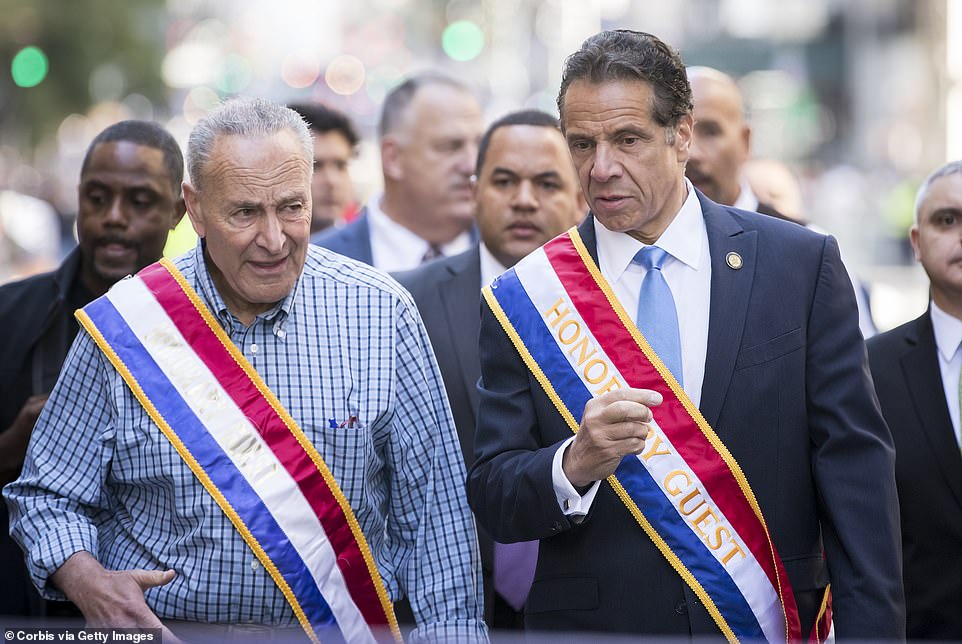 The lawyer was praised throughout the beginning of the coronavirus outbreak for his policies and he even wrote a book – American Crisis: Leadership Lessons from the COVID-19 Pandemic – about it. He was later ordered by the state’s Attorney General’s Office to turn over his estimated $5.1million proceeds from the self-congratulatory memoir, following a probe by a state ethics panel. Pictured: Cuomo and Chuck Schumer walk in a Labor Day Parade in 2019. 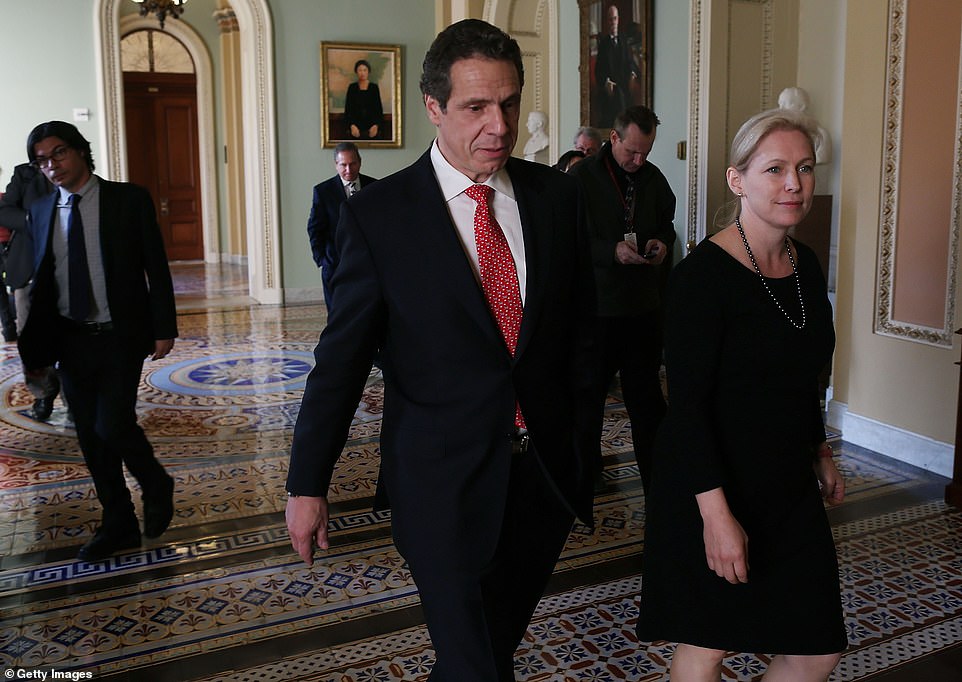 The profits from Cuomo’s book came into question in October 2021, when the Empire State’s Joint Commission on Public Ethics (JCOPE) announced that it was conducting an internal inquiry that was reassessing its initial approval of Cuomo’s 2020 book. The ethics agency commission voted 12-1 in December 2021 to order the ousted governor to fork over his memoir’s profits to the state Attorney General’s office, after multiple investigations found Cuomo used state resources to produce and promote the tell-all book. 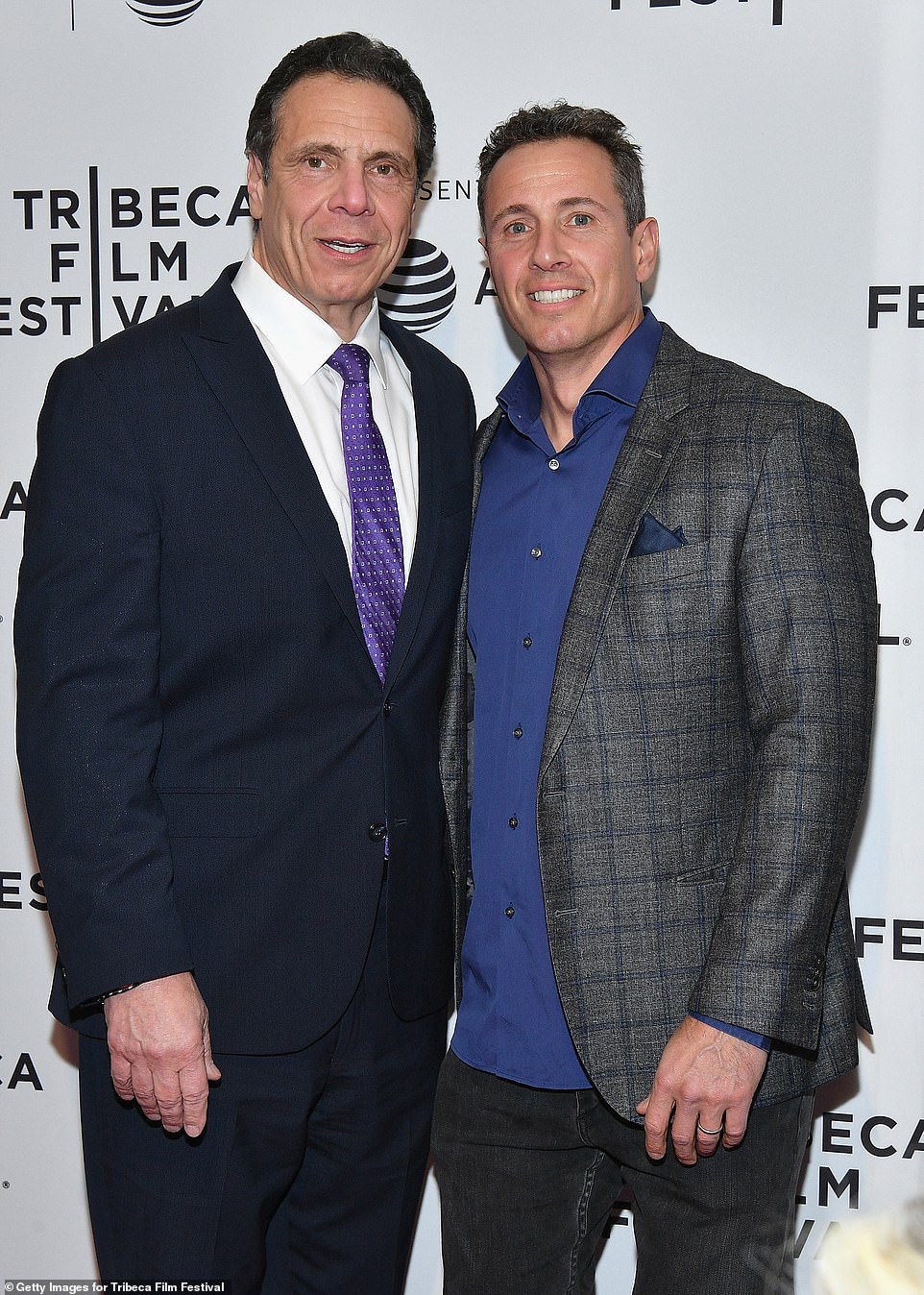 Cuomo’s ultimate fall from grace came after at least 11 women came forward and accused him of sexual harassment – which he continues to adamantly deny. He resigned in August 2021 after months of pushback and eventually all criminal charges were dropped against him. Pictured Andrew with his brother Chris in 2018. 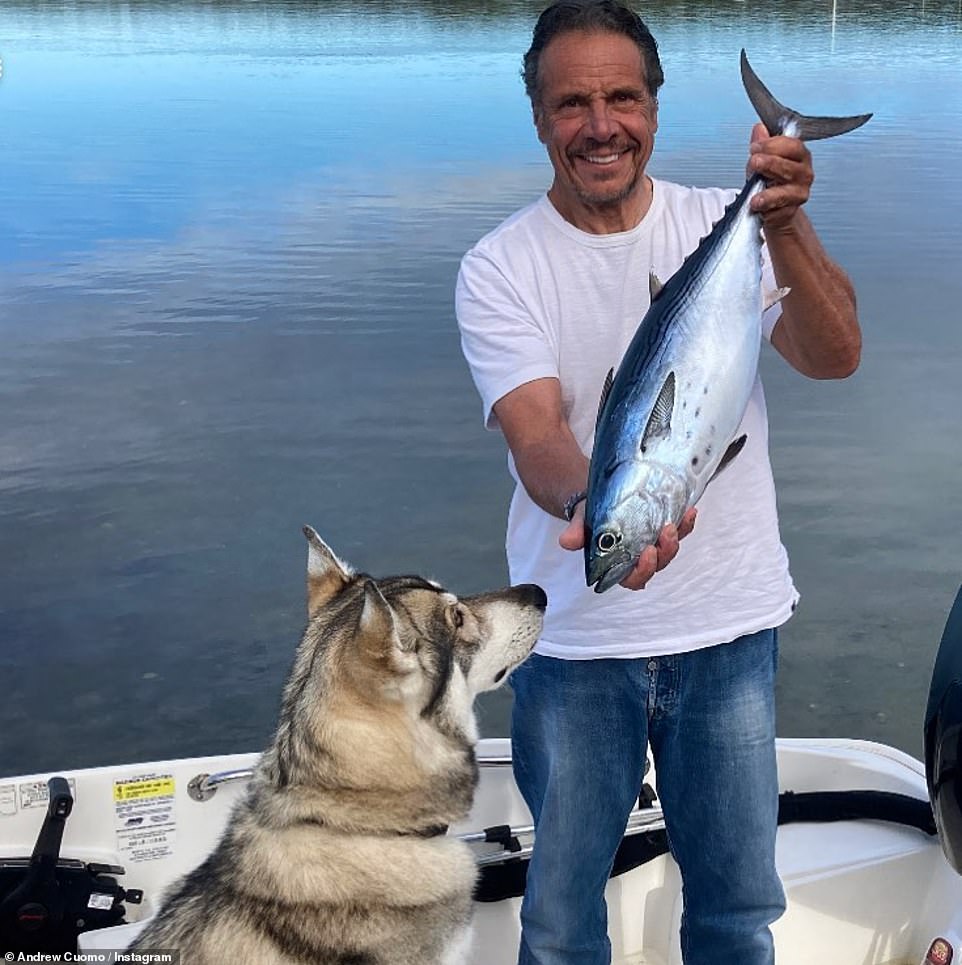 The charges against Cuomo were based on allegations by Brittany Commisso, who said Cuomo reached up her blouse and grabbed her breast in late 2020 while they were alone in his Executive Mansion office, where she’d been summoned to help with his cellphone. He insisted he did no such thing, saying ‘it would be an act of insanity.’ Her testimony was among the most damning in a report released in August 2021 by Democratic state Attorney General Letitia James that concluded Cuomo sexually harassed 11 women. Pictured: Cuomo in October of last year with his dog Captain. 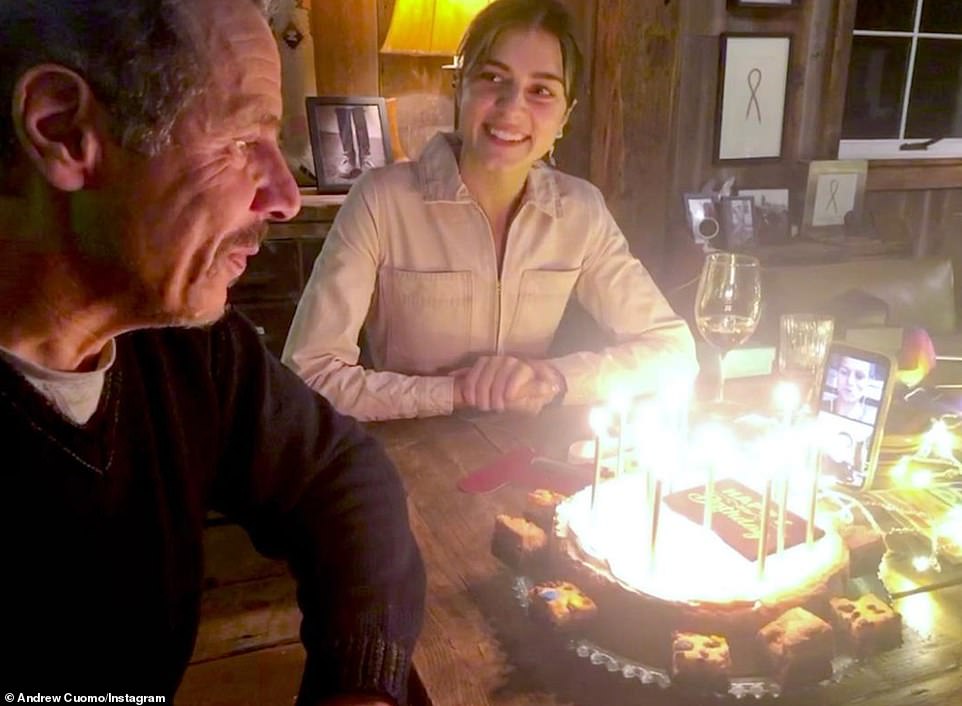 Since his resignation, Cuomo has mostly kept himself out of the public eye, occasionally showing off pictures of him fishing with his dog and celebrating his 64th birthday with his daughter Michaela (pictured). Cuomo’s younger brother Chris was also fired from CNN after an investigation revealed that he was helping Andrew fight off sexual misconduct allegations. 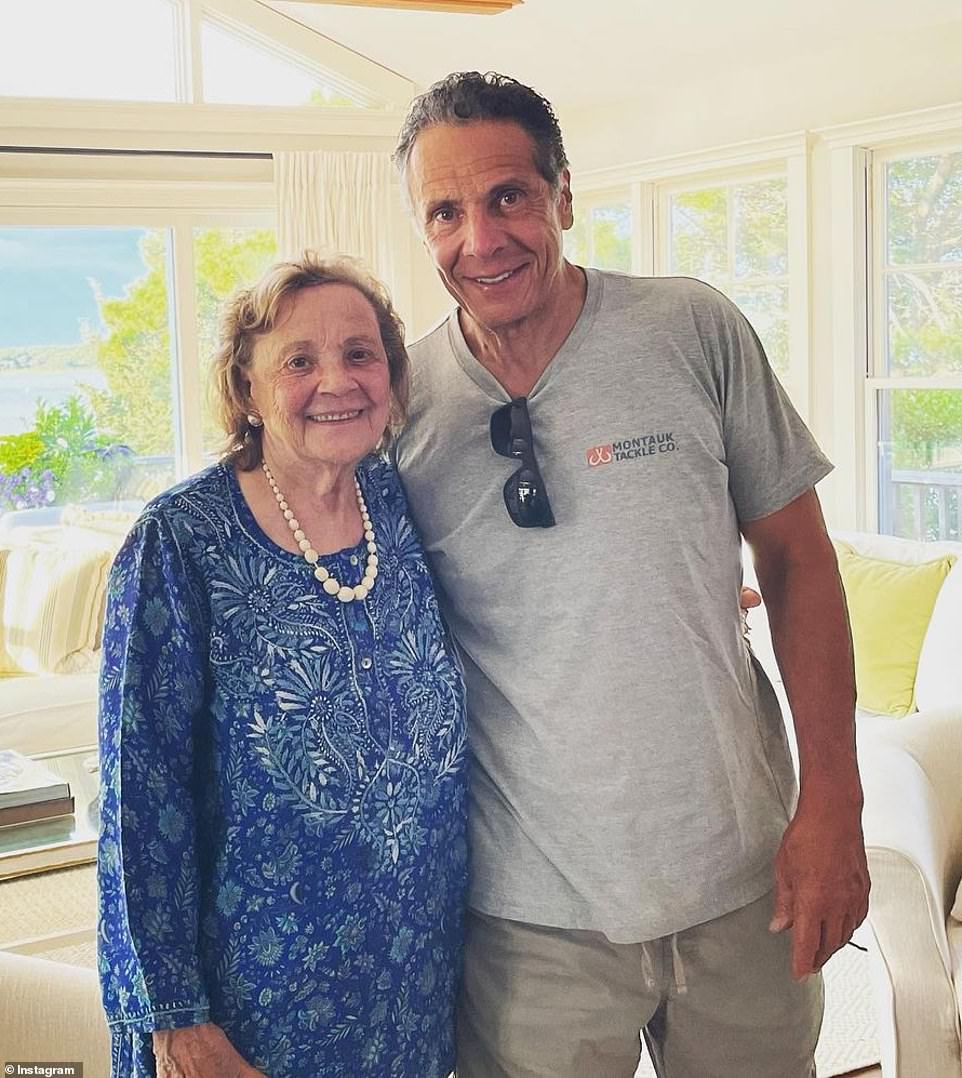 Pictured: Andrew took to social media in tribute to his mother’s 90th birthday in August.

James Hird admits he DOES want to coach Essendon in 2023

Charlize Theron, 47, Gets Candid When She Says She’s ‘Never Been On A Kim Kardashian Level’ Of Fame