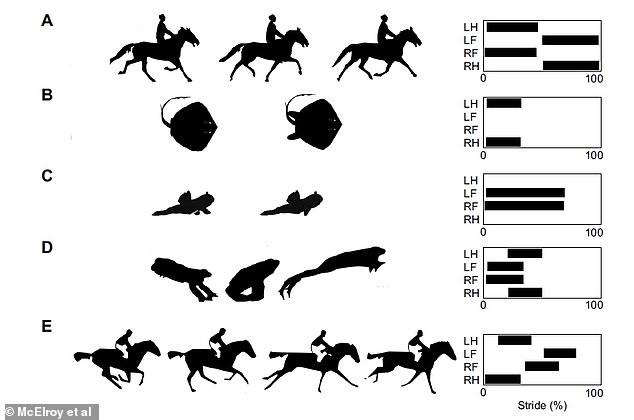 Researchers have analyzed existing scientific literature on the gait styles of 308 species – not just mammals, but also amphibians, reptiles and fish.

The ability to perform “asymmetrical gaits,” such as galloping, has been lost and gained over millions of years of evolution, both before and after the first animals arrived on land 210 million years ago, the experts found.

Galloping is defined as all four footsteps occurring at different and unevenly spaced times, the academics said.

Although galloping is often associated with horses, today the distinctive gait is also used by camels, lions, crocodiles and giraffes as they build up speed.

The ability to perform ‘asymmetrical gaits’, such as cantering, has been lost and gained over millions of years of evolution. Here, from B to E, are examples of various asymmetrical gaits – punting (B), crutches (C), bounding (D), and cantering (E). A shows a symmetrical trot. Plots to the right of each image sequence represent footstep patterns associated with each hallway. RH, right hind leg; RF, right front leg; LV, left front leg; LH, left hind leg

† Stools: When amphibious fish drag themselves over land by their fins)

† punt: When fish push their pelvic fins along the sea or riverbed

The new study was conducted by Eric McElroy of the College of Charleston in South Carolina and Michael Granatosky of the New York Institute of Technology.

“From a neuromuscular perspective, any motor program that involves asynchronous, cyclical movements of the limb pairs is an asymmetric gait,” they say in their paper.

“This finding adds to the growing body of work showing that early gnathotomes and tetrapods may have used a diversity of gaits, including an asymmetrical pattern of limb cycles.”

Galloping is just one form of movement from a selection of maneuvers known as “asymmetrical gaits” – where the timing of footfalls is unevenly distributed.

Other examples of asymmetrical gaits are executed ‘bounds’ by rabbits, crutches (when amphibious fish drag themselves over land by their fins) and punts (when fish push themselves along the sea or riverbed with their pelvic fins). 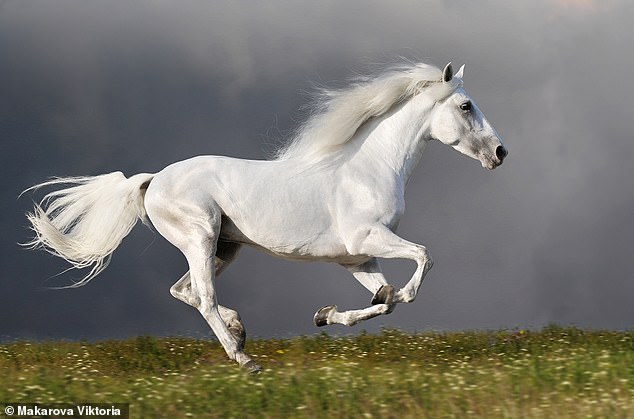 While galloping is often associated with horses, the distinctive gait is also key for camels, lions, crocodiles and giraffes as they build up speed.

Fossils found in South Africa suggest some of the first animals to leave water and walk on land came from Antarctica, a 2018 study found.

The creatures were discovered in South Africa’s Eastern Cape coastal province, which was more than 70 degrees south within the Antarctic circle 360 ​​million years ago.

Read more: Some of the first animals to walk on land lived in Antarctica

Previously, scientists had suggested that the ability to bind and gallop only emerged after mammals first appeared on the planet 210 million years ago.

But this cannot be the case, as crocodiles can also gallop at their highest speed, usually while escaping, while turtles are capable of leaping like rabbits.

For their new study, McElroy and Granatosky searched the scientific literature on animal gaits.

They constructed a family tree of the mammals, marsupials, monotremes, reptiles, frogs, toads and fish known to use asymmetrical “footfalls” when moving over surfaces with their feet and fins.

“In total, we collected data from 308 species,” says McElroy. “It took months to resolve all the kinks in the analysis.”

Next, the duo ran a series of simulations to find out how likely it is that asymmetric gaits appeared earlier or later in the evolutionary tree.

According to the findings, it’s highly likely that the earliest ancestors of nearly all modern animals, including fish, were able to move with some sort of proto-asymmetric gait 472 million years ago.

Whether they were punting, crutching or jumping along the seafloor isn’t known, but the animals were able to asymmetrically coordinate their limbs to propel themselves. 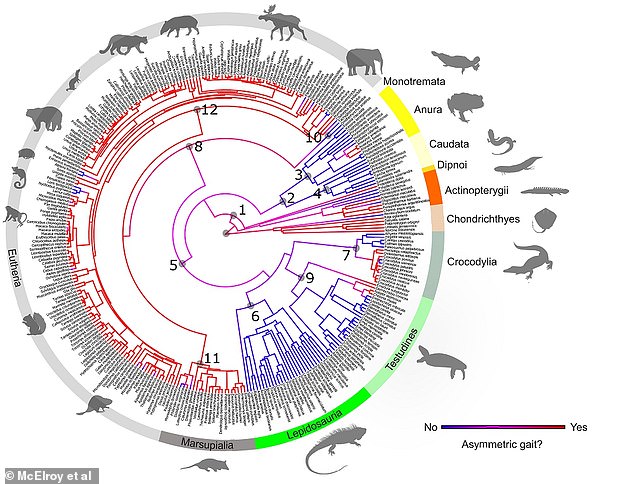 Researchers constructed a family tree of the mammals, marsupials, monotremes, reptiles, frogs, toads and fish known to use asymmetrical “footfalls” when moving over surfaces with their feet and fins

Interestingly, some creatures, including lizards, salamanders, frogs, and even elephants, are no longer able to bind and gallop, even though they have ancestors in their family tree that were capable of doing so.

Throughout Earth’s history, the ability to bind and gallop wasn’t just limited to mammals — nearly all animals alive today have ancestors that were able to move asymmetrically.

Many lost the ability to move asymmetrically, probably because they either lost the nerves needed to coordinate these maneuvers or because they grew too big or too slow to get airborne.

The authors conclude that mammals are not the only select group with the ability to coordinate asymmetric movements.

It is possible that humans inherited the ability from an ancient fish-like ancestor that propelled itself with its fins across the seafloor long before any kind of foot or fin set on dry land.

The research is published in the Journal of Experimental Biology†

LANGNECKED DINOSAURS HAD A GAIT SIMILAR TO A Hippopotamus, STUDY FINDS

Long-necked dinosaurs, including diplodocus, had gaits unlike any living animal, but most closely resembled a hippopotamus, a recent study shows.

Researchers studied footprints of sauropods to learn more about their gait — the way they walked — in the Lower Cretaceous De Queen Formation, Arkansas.

Like hippos, sauropods walked with a ‘diagonal gait’ — with each stride of one foreleg coincident with, or very closely followed by, the hindlimb on the other.

The use of the diagonal corridor would have allowed the dinosaurs to balance their broad frames, the researchers found. 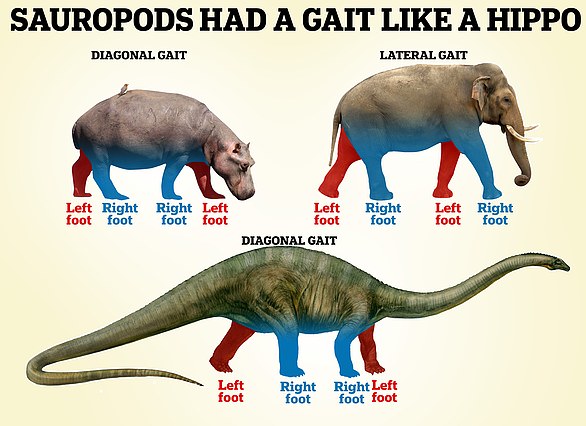 Like hippos, sauropods walked with a ‘diagonal gait’ — with each stride of one foreleg coincident with, or very closely followed by, the hindlimb on the other. Elephants have a so-called ‘lateral’ gait – where two limbs on the same side of the body tend to move forward one after the other

In comparison, elephants use something called a “lateral” gait, where two limbs on the same side of the body tend to move forward one after the other.