Anne Heche’s eldest son, 20, applies to be in charge of the late star’s estate 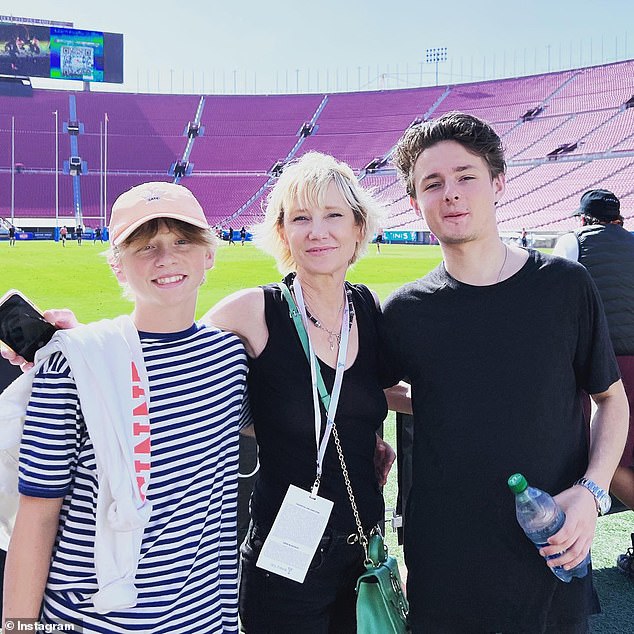 Anne Heche’s eldest son has filed to take charge of the late star’s estate after she died without a will, from injuries sustained in a fireball car accident last month.

According to legal documents, 20-year-old Homer Heche Laffoon filed a petition in Los Angeles court this week to take control of her fortune.

In his petition to the court, Laffoon points out that the only two remaining heirs to his mother’s estate are himself and his younger brother Atlas – who is a minor.

However, he also says it’s unclear how much money or property Heche, 53, had in her name before she died. In the file, Homer lists his mother’s personal belongings and her annual income as “unknown.”

Laffoon also asks the court to be appointed as his brother’s guardian.

Anne Heche’s eldest son Homer (pictured right) has applied to take charge of the late star’s estate after she died without a will, from injuries sustained in a fireball car accident last month

‘The estate consists of two (2) heirs in the will – Homer Heche Laffoon and Atlas Heche Tupper’, the filing – seen by The blast – say.

‘Homer Heche Laffoon is of age and the intended administrator. Atlas Heche Tupper is a minor. Simultaneously with this petition, a petition to appoint a guardian ad litem for the minor was filed, specifically requesting that the guardian ad litem be authorized to waive bail on behalf of the minor.’

Heche was divorced from Laffoon’s father Coleman ‘Coley’ Laffoon. He will therefore have no place in this case. Unless someone disputes Homer’s claim, he is expected to take on his mother’s finances.

“My brother Atlas and I have lost our mother,” Homer said in a statement to Fox News Digital after his mother’s tragic death. “After six days of almost unbelievable emotional swings, I am left with a deep, wordless grief. Hopefully my mother is free from pain and begins to discover what I like to envision as her eternal freedom.”

“I loved her and I miss her, and I always will,” Coleman Laffoon said.

“Homer is doing well. He’s grieving, of course, and it’s heavy. It’s really rough, as probably anyone can imagine. But he’s surrounded by family and he’s strong, and he’ll be fine.” So for all those people checking in, thank you for checking in, showing your heart, offering prayers and everything. It is so beautiful. Thank you.’

The court will now have to dig into Heche’s finances to determine the value of her estate and what properties she owns.

In 2021, it was reported that she was selling her Los Angeles Silver Lake Cottage for about $2 million with co-star and ex-partner Thomas Jane.

It was also previously reported that she owned another home in the Hancock Park-Wilshire area of ​​Los Angeles – a mansion priced around $4 million. 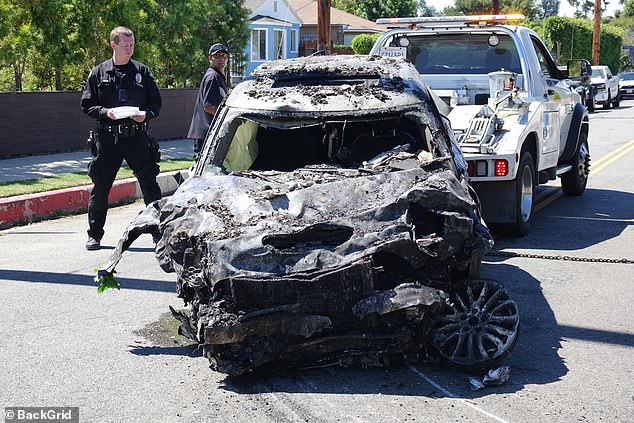 Heche died after a crash on August 5 in Los Angeles. The actress rammed her Mini Cooper into a house, causing an explosion. In the photo: the wreckage of her car after the crash 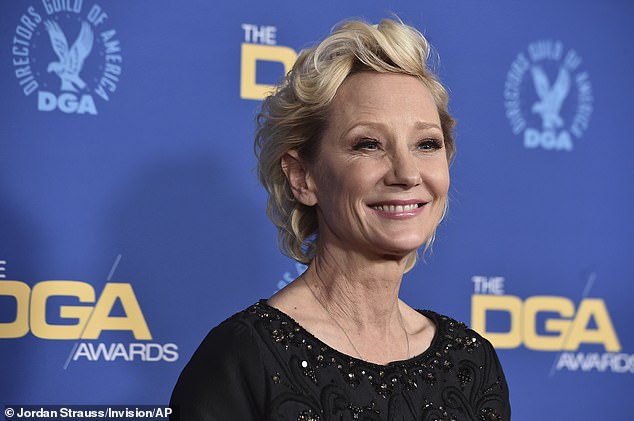 A coroner ruled on August 17 that Anne Heche (pictured) died of inhalation and burns, and that the death was an accident 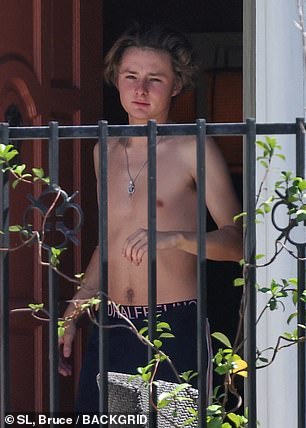 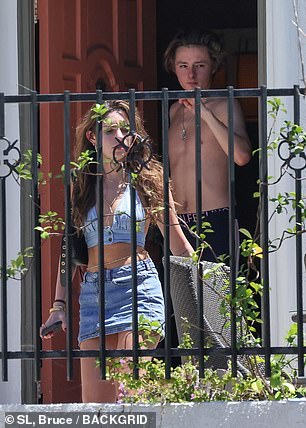 In exclusive DailyMail.com photos, Laffoon is seen shirtless showing his two girlfriends at the door. His two friends in costume leave his Los Angeles home and look like the trio is going all night – days after his mother’s death

Heche died after a crash on August 5 in Los Angeles. The actress rammed her Mini Cooper into a house, causing an explosion.

She was badly burned and left in a coma. Heche’s life support machine was disabled on August 14, and she was cremated on August 18.

A coroner ruled on August 17 that Heche died of inhalation and burns, and the death was deemed an accident.

The mother of two also had a fractured sternum caused by “blunt trauma,” according to information on the Los Angeles County Medical Examiner-Coroner website.

The Emmy-winning film and television actor was taken out of life at a burn center.

Heche suffered a “severe anoxic brain injury” caused by a lack of oxygen, according to a statement released on behalf of her family and friends.

She was declared brain dead, but was kept alive until her organs could be donated.

Blood tests showed the actress had cocaine and fentanyl in her body when the high-speed crash occurred, but officials confirmed she hadn’t consumed alcohol – despite being pictured with a vodka bottle in her cup holder. 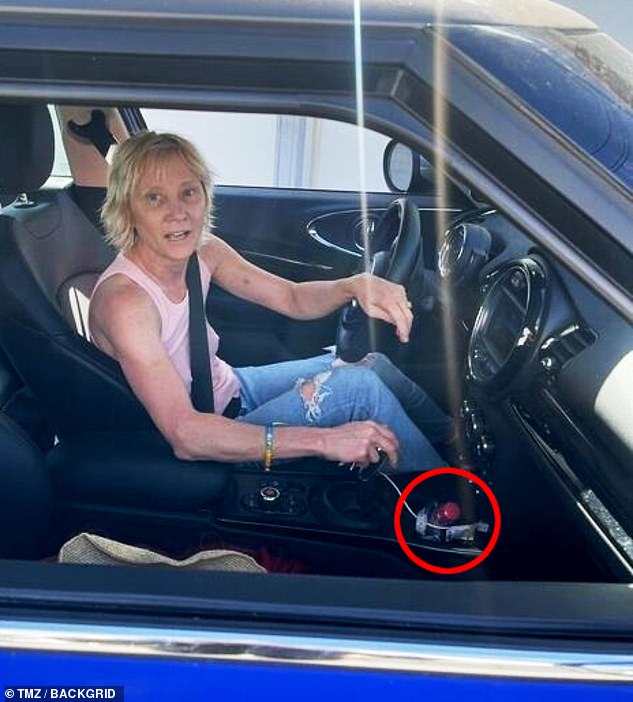 A new 911 call also revealed that neighbors were initially unaware that Heche was trapped in the car at the property.

The caller told authorities that a “car just drove through my neighbor’s house” and entered the “second room” and that there was no one in the car. Fox newssaid.

When asked if the car was in the house, the caller told the dispatcher it was “10 feet” inside and moments later the car burst into flames with Heche in it.

Seconds later, it was revealed that Heche was actually in the car. The caller told the emergency room: ‘Someone is trapped in the car. It’s a big fire.’

A dispatcher told the caller to “try to get the driver out of the car if we can,” but advised them to stay safe. 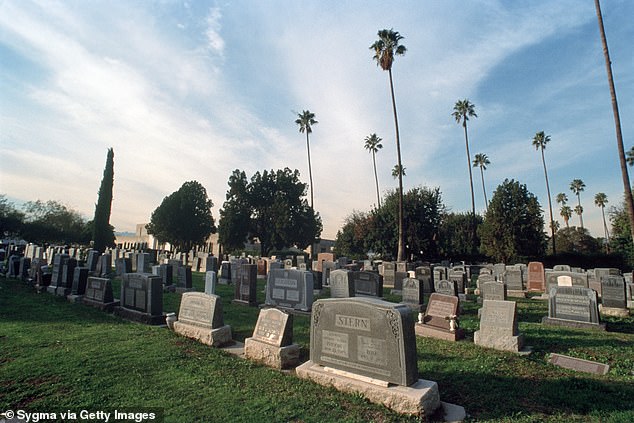 The actress lost control of her car when it drove into a house and started a fire that severely burned her, leaving her in “extremely critical condition,” her representative said.

It reportedly took 59 firefighters 65 minutes to “access, contain and completely extinguish the persistent flames” caused by the Heche crash.

A man can be heard begging emergency services to be “very quick” once they realized someone was trapped and went to get a hose to try and help.

They said, ‘There’s smoke, I haven’t seen any flames, someone just said get water. There’s a fire, the house. I don’t see any flames, but there is a lot of smoke. Big fire.’

After the star was taken off the ventilator, tributes poured in, including from her own management team, who wrote: “Today we lost a bright light, a kind and most joyous soul, a loving mother and a loyal friend.

“Anne will be deeply missed, but she lives on through her beautiful sons, her iconic body of work and her passionate advocacy.”

Her 20-year-old son Homer also said he had gone through “incredible emotional swings” and was left in a “deep, wordless grief.”

“Hopefully my mom is free from pain and starts to discover what I like to envision as her eternal freedom,” he told People.

The actress also leaves behind a 13-year-old son Atlas, who she shares with ex James Tupper.