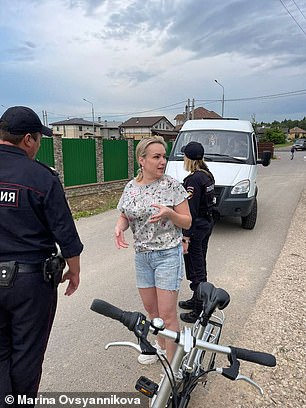 Leading Russian anti-war protester Marina Ovsyannikova was detained on Wednesday, while Moscow launched a criminal investigation into her after denouncing Vladimir Putin’s invasion of Ukraine on live television earlier this year.

Ovsyannikova famously stormed the set of Channel One – Russia’s most-watched news show – with a poster that read: ‘They are lying to you here’ and ‘Stop the war!’

The arrest comes after officers raided her home in the early hours of the morning. Russian officials accuse Ukrainian-born Ovsyannikova of discrediting the military — a crime that could earn her up to 15 years in prison.

“A criminal case has been launched,” lawyer Dmitry Zakhvatov said today, adding that they are now waiting for investigators to decide on an interim measure for the 44-year-old mother of three.

In a recent interview with AFP news agency, Ovsyannikova expressed hope that authorities would not place her in pre-trial detention because she has two children.

Writing on messaging app Telegram earlier in the day, Ovsyannikova said 10 members of law enforcement raided her home at 6 a.m.

“They scared my young daughter,” she added. 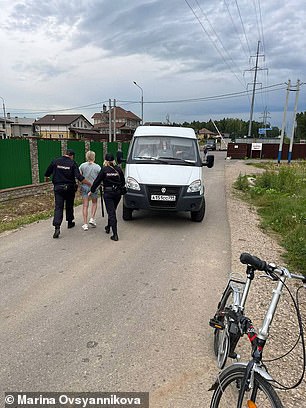 Marina Ovsyannikova – pictured being detained by police on July 17 – stormed the set of Russia’s most-watched news show with a poster that read: ‘They’re lying to you here’ 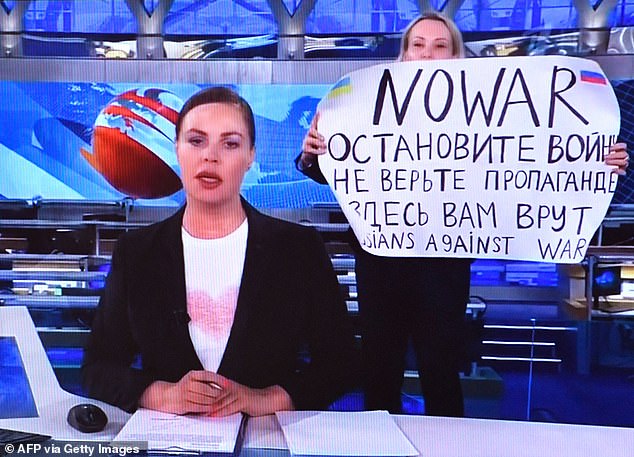 The TV journalist (pictured right) has been repeatedly targeted by Vladimir Putin’s officers since her protest in March and could face up to 15 years in prison for her dissent under new draconian laws aimed at suppressing any criticism of the war in Ukraine. suppress

In March, Ovsyannikova, then an editor at Channel One, burst onto the set of his flagship Vremya (Time) evening news, carrying a poster that read ‘No War’ in English.

In mid-July, Ovsyannikova also held a one-man protest near the Kremlin, with a poster reading “Putin is a murderer.”

Criticism of President Vladimir Putin’s decision to send troops to Ukraine has been virtually banned in Russia and her protest made headlines around the world.

The criminal investigation against Ovsyannikova was launched after two Moscow courts ordered the journalist to pay fines for discrediting the Russian military.

Ovsyannikova said she had been accused of spreading “fake” information about the Russian military.

Today, her home was raided under the law on the “dissemination of knowingly false information about the actions of the Russian armed forces,” Zakhvatov said.

Despite a request to Zakhvatov to be present at the raid, it was carried out in the early hours of Wednesday morning without him being there. 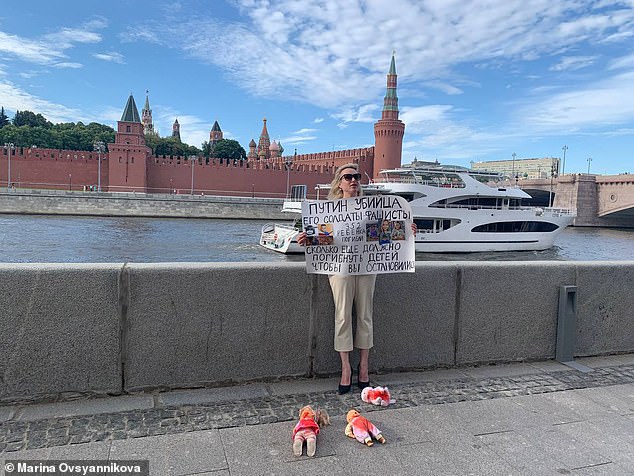 Pictured: Marina Ovsyannykova holds up a banner in Moscow to protest the war in Ukraine

The TV journalist has been repeatedly targeted by Vladimir Putin’s agents since her protest in March and faces up to 15 years in prison for her dissent under new draconian laws aimed at suppressing any criticism of the war in Ukraine.

Through this law, Putin has powerfully armed independent media outlets to vent Russian propaganda — referring to a “special military operation” rather than a “war” or “invasion,” while denying massive Russian casualties and war atrocities.

Ovsyannikova has bravely continued to protest the war despite regular fines, and in early July announced that she was returning to Russia to resolve a custody dispute over her two children — despite the risk of arrest.

“I go to court the way I go to work,” she said this week.

She wrote on Telegram on Wednesday that more than 350 children had already died in Ukraine. “How many children have to die before you stop?” she added.

“I could not express my gratitude to Putin on behalf of 30 million Russians who are living in the 21st century without sewage systems and hot toilets,” she said.

“All the accusations against me are absurd and unacceptable.”

In April, she was hired by the German media company Welt as a ‘freelance correspondent’ to report for the newspaper Welt and for Welt’s TV news channel, including from Ukraine and Russia.

Welt is the respected flagship of the publishing house Axel Springer, with a daily circulation in Germany of approximately 180,000 copies.

Welt Group editor-in-chief Ulf Porschardt said at the time that he was delighted to be working with Ovsyannikova, adding that her on-air protest “defended key journalistic ethics – despite the threat of state repression.”

“At a crucial moment, Marina Ovsyannikova had the courage to confront Russian viewers with an unadorned view of reality,” he continues.

After making international headlines when she stormed the broadcast of Life, Ovsyannikova disappeared for several days while many feared the worst for her.

In the end, she was fined just £227 by a Russian court – just a fraction of the expected retaliation – sparking a number of theories about the true nature of her protest. 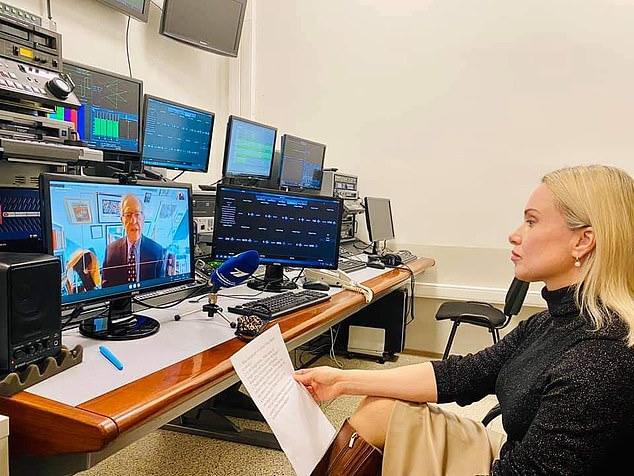 Ovsyannikova’s status as a senior television editor at the Channel One station meant she was allowed access to the broadcast center to make her protest.

Some of those theories range from Ovsyannikova as a Kremlin plant to her being a “British espionage” according to the head of news at Channel One.

Ovsyannikova has remained in Russia after her arrest and fine, appearing to have evaded the state’s worst retaliation, but she told Reuters in June she was concerned for her safety and hoped her protest would open the Russians’ eyes to propaganda .

She has continued to describe a “special operation” in Ukraine as a war and invasion.

In her first report to her new employers earlier this year, she spoke of the minor persecution she has faced since the protest.

Her pool membership was revoked, a pet store refused to give her dog food, and she found her car with all four tires deflated and a dead battery.

During an interview with US media, the journalist also said he had rejected French President Emmanuel Macron’s asylum offer because “she is a patriot” and wants to live in Russia. 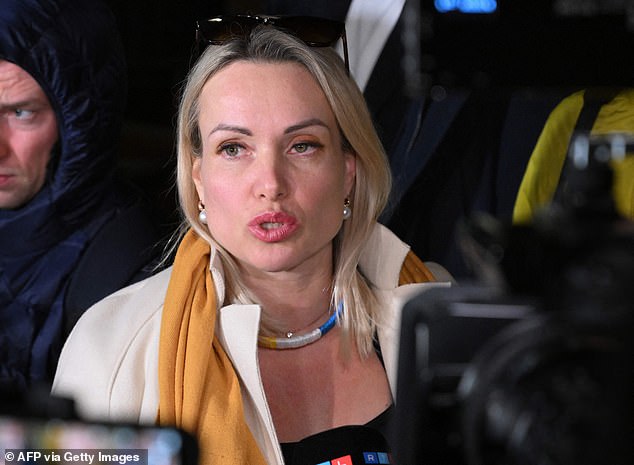 ‘[It] was a spontaneous decision for me to go live on air, but the dissatisfaction with the current situation has been piling up for many years as the propaganda on our state channels became more and more distorted,” she added.

“I came to work and after a week of reporting this situation, the atmosphere on the first channel was so unpleasant that I realized I couldn’t go back there.”

Ovsyannikova said she was thinking of aiding an anti-war protest in Moscow Square — likely referring to the city’s Red Square — but quickly realized captivity would be “pretty useless.”

“I decided that maybe I could do something else, something more meaningful where I could draw more attention and show the rest of the world that Russians are against the war,” she said on Sunday.

“I could show the Russian people that this is just propaganda, expose this propaganda for what it is and maybe encourage some people to speak out against the war and hope my action would help people change their minds.” she added. .

The queen died at 3:10 p.m. So why did it take more than three hours to tell Prince…

Kylie Jenner sizzles in a sheer dress with a plunging…

Officials in Fort Myers implement 6pm curfew due to…