The Archbishop of Canterbury has praised the King for his tremendous ‘courage’ in touring the UK just days after his mother the Queen passed away.

Justin Welby said His Majesty’s “courage is extraordinary” when he helped people queuing to see the Queen lying in state at Westminster Hall.

The cleric was dressed in his dog collar and had a crucifix around his neck, but had also put on a fluorescent jacket when he joined the faith team and helped people in line process grief. 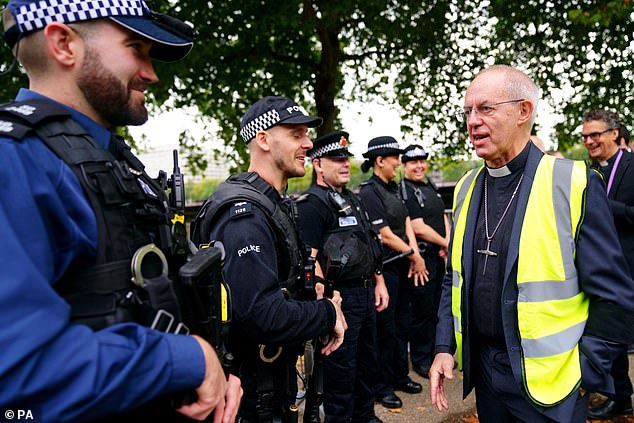 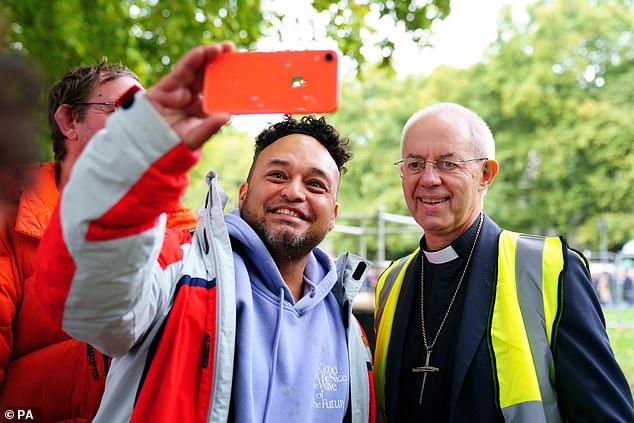 He told the BBC: ‘He lost his mother. There will be multitudes of people watching this who have lost someone similar.

“And if you were to say to them, ‘You’re going on a tour of the UK and you’re not expected to show public emotion’, I think they’d say, ‘Don’t be so ridiculous’.

“His courage to do that is extraordinary, but it also shows his heart for service to the people.” 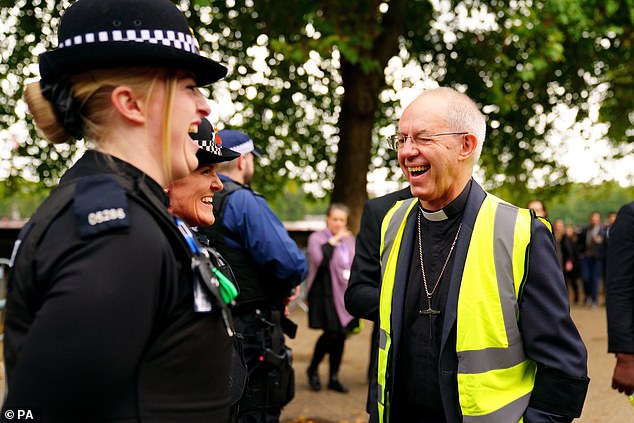 He added: ‘Most people are in very good shape. I had a few conversations yesterday where the process had renewed the sense of grief over their own losses.”

People cried, prayed and saluted after queuing for 48 hours to pay their respects to Her Majesty.

The queue stretches for 3.8 miles along the bank of the River Thames to Tower Bridge.

Those in it now call it the ‘Elizabeth Line’ in a nod to the London railway opened by the Queen in June, one of her last public engagements.

Benefactors have shared merry camaraderie, egg sandwiches and biscuits while waiting outside, as people queued all night to pay their last respects to the late monarch at the Palace of Westminster.

Hymns have been played all over Southbank, and many have sung along.

By noon today, the line was four miles long, stretching past Tower Bridge into Bermondsey, as officials expect about 400,000 people to view the coffin in the coming days. It was at 2.6 miles as of 8 o’clock today.

This morning, more than 1.3 million people signed up to check out the line queue tracker.