An ancient armored ‘shark’ that roamed the oceans 436 million years ago is believed to be man’s oldest ancestor — 15 million years older than the previous one.

Paleontologists reconstructed small skeletal fragments unearthed in China that belonged to a creature with an external “armor” and several pairs of fin spines separating it from living jaws, such as cartilaginous sharks and rays.

The team also discovered about 20 teeth from this new species called Fanjingshania, which allowed them to determine that they could have come only from a fish with a curved jaw edge similar to that of modern sharks.

The fossils “help trace many human body structures to ancient fish, some 440 million years ago, and fill some important gaps in “fish-to-human” evolution, researchers at the Institute of Vertebrate Paleontology and Paleoanthropology ( IVPP) under the Chinese Academy of Sciences.

This research also yielded other fossils, particularly those showing that the galeaspids, members of an extinct clade of jawless fish, possessed paired fins.

Corresponding author Professor Zhu Min, of the Chinese Academy of Sciences in Beijing, said in a pronunciation: ‘This is the oldest jawfish with known anatomy.

“The new data allowed us to place Fanjingshania in the family tree of early vertebrates and gain much-needed information about the evolutionary steps that led to the origin of important vertebrate adaptations, such as jaws, sensory systems and paired appendages.”

Scientists said in 2013 they had found a 419-million-year-old fish fossil in China that disproved the long-held theory that modern animals with bony skeletons (osteichthyans) evolved from a shark-like creature with a frame made of cartilage.

The ancient ancestor of humans was recovered from bone bed samples from the Rongxi Formation at a site in Shiqian County in Southern China’s Guizhou Province.

Fanjingshania had several features different from all known vertebrates, especially dermal shoulder girdle plates that fuse as a unit with a number of spines – pectoral, prepectoral and prepelvic. 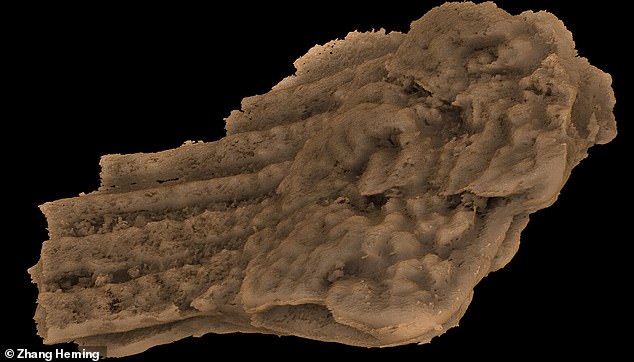 Paleontologists reconstructed small skeletal fragments unearthed in China. Pictured is a fragment of the pectoral dermal skeleton (part of a thoracic spine fused with the new species’ shoulder girdle 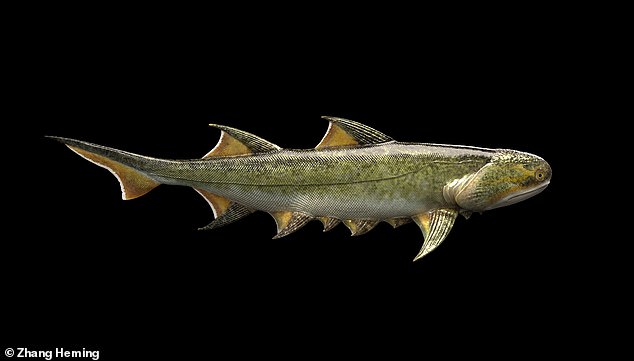 The team also discovered about 20 teeth from this new species called Fanjingshania (pictured), which allowed them to determine that they could only have come from a fish with a curved jaw edge similar to that of modern sharks.

The creature’s fin spines are among the greatest finds, as the feature helped scientists pinpoint the new species’ position in the evolutionary tree of early vertebrates.

The team also found that the fossilized bones of Fanjingshania reveal resorption (the absorption of cells or tissue into the bloodstream) and remodeling typically associated with skeletal development in bony fish, including humans.

The resorption features of Fanjingshania are most evident in isolated trunk shells showing signs of tooth-like shedding of crown elements and removal of dermal bone from the shell base.

Lead author Dr. Plamen Andreev, a researcher at Qujing Normal University, said in a statement: “This level of hard tissue modification is unprecedented in chondrichthyans, a group that includes modern cartilaginous fish and their extinct ancestors.

“It speaks of greater than currently understood developmental plasticity of the mineralized skeleton at the beginning of the diversification of fish jaws.” 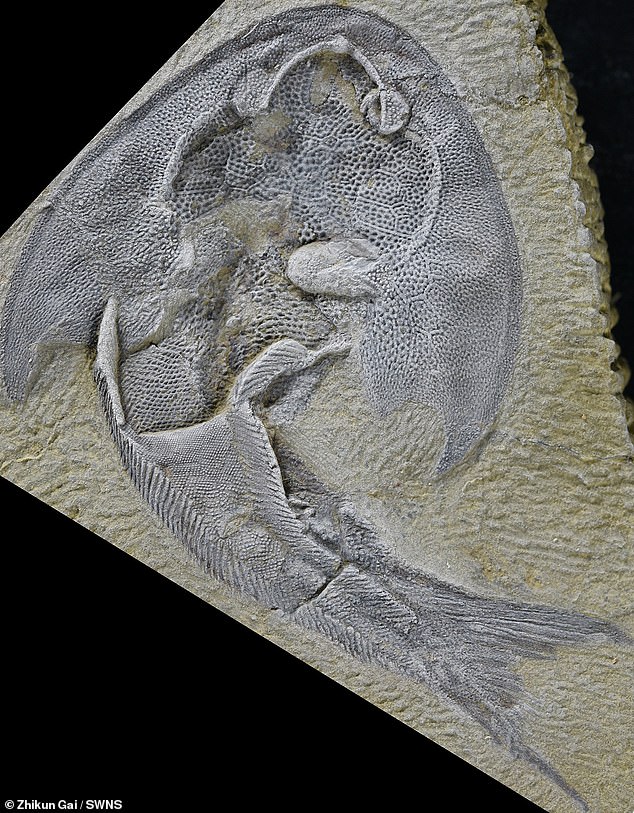 This research also yielded other fossils, particularly those showing that the galeaspids, members of an extinct clade of jawless fish, possessed paired fins. 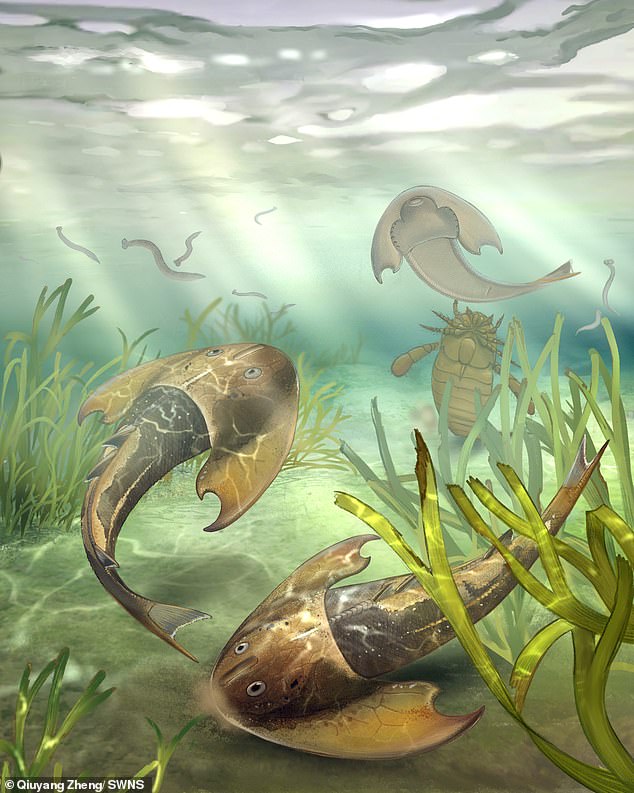 So far, only fossils of the heads of the creatures have been found. These fossilized remains reveal the first time paired fins evolved

The team also discovered the full skeleton of galeaspids, an extinct taxon of jawless marine and freshwater fish, in the rocks of Hunan and Chongqing provinces and named Tujiaaspis after the native Tujia people who live in this region, which contains their entire bodies.

And so far, only fossils of the heads of the creatures have been found.

First author Zhikun Gai, a University of Bristol alumnus, said: ‘The anatomy of galeaspids has been a mystery since they were first discovered more than half a century ago.

“Tens of thousands of fossils are known from China and Vietnam, but almost all of them are heads – so far nothing is known about the rest of their bodies.”

“The new fossils are spectacular. They preserved the entire body for the first time and show that these animals had paired fins that extended continuously all the way from the back of the head to the very tip of the tail.”

“This fin-fold hypothesis has been very popular, but there was no supporting evidence for it until now. The discovery at Tujiaaspis revives the fin-fold hypothesis and reconciles it with current data on the genetic controls on embryonic fin development in living vertebrates.”

Woman, 22, dies by suicide after struggling with Lyme disease for ‘years’: the disease ‘hijacked her’