A spectacular aurora borealis triggered by giant ‘cannibal’ solar eruption that hurtled towards Earth at 1.8 million miles an hour has thrilled stargazers in Scotland and North America.

New photos from the public show the natural light display in green and pink hues over Loch Lomond in Scotland, rural Canada and North Dakota.

According to the Met Office, a coronal mass ejection (CME) – a massive expulsion of plasma from the Sun’s outermost layer – was responsible for the display last week, from March 30 to April 1.

When a slow CME is expelled before a fast one from the same general region on the Sun, the fast CME simply ‘gobbles up’ the slow one, resulting in one big ejection from the sun.

One photographer, David Gilliver, from Gartcosh, North Lanarkshire, captured the aurora over Loch Lomond near Glasgow as a flash of brilliant fluorescent green over the loch’s surrounding highlands on March 30.

Mr Gilliver said: ‘The lights were barely visible to the naked eye when I arrived at Duck Bay Marina next to Loch Lomond – I could just make out a vague green hue in the sky.

‘I set my camera rolling straight away and was so excited when I started to see the northern lights appearing in the resulting exposures. 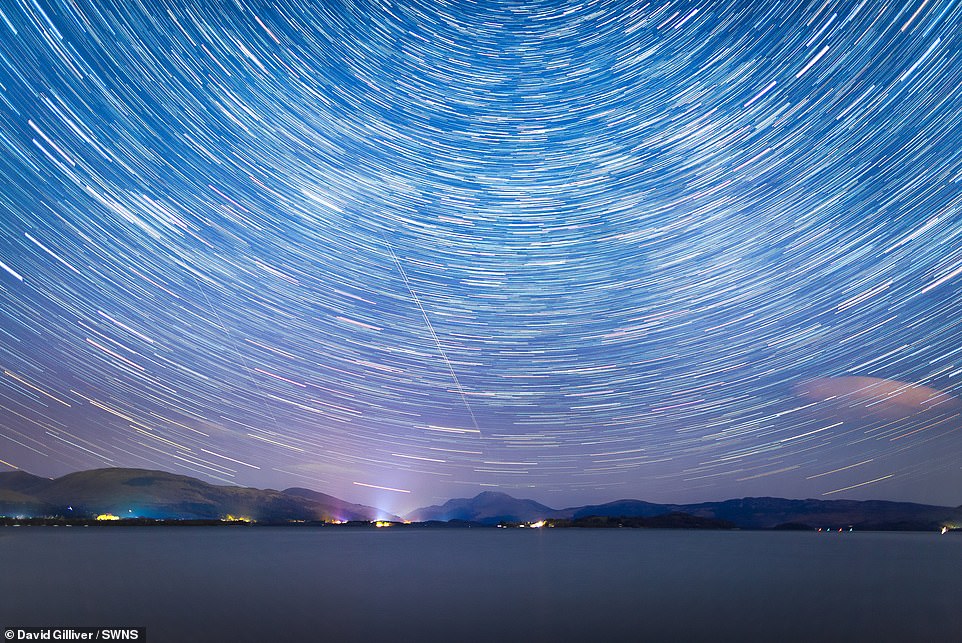 The Northern and Southern Lights are natural light spectacles triggered in our atmosphere that are also known as the ‘auroras’.

There are two types of aurora: aurora Borealis, which means ‘dawn of the north’, and aurora australis, ‘dawn of the south.’

The displays light up when electrically charged particles from the sun enter the Earth’s atmosphere.

Usually the particles, sometimes referred to as a solar storm, are deflected by Earth’s magnetic field.

But during stronger storms they enter the atmosphere and collide with gas particles, including hydrogen and helium.

These collisions emit light. Auroral displays appear in many colours although pale green and pink are common.

Mr Gilliver went out after dark to capture the phenomenon around 11:30pm with his Canon 5D Mark III and Canon 24mm prime lens.

He stayed outside for two hours to witness the aurora and take his photo with a 25-second exposure, which helps emphasise movement of an object in a still photograph.

‘I have only witnessed them twice before and didn’t have my camera gear with me on one of those occasions, and so I was really excited to discover that the northern lights were going to be pretty active this week,’ he said.

‘It is one of the most exciting moments I have experienced as a photographer!’

Time-lapse footage and photos also show the aurora borealis over a rural cabin in central Saskatchewan, Canada, as captured on March 30 by photographer Jenny Hagan.

‘Just south of the small village of Laporte … I set up by an old 1950s abandoned farm house,’ Hagan told Space.com.

‘Sights like these are plentiful here in rural Saskatchewan, the land of the living sky, and the relics of the past offer up great foreground for the wide open views of our sky.’

Another time-lapse video also shows a view of the aurora as captured by Kelsey Byre in Grafton, North Dakota.

Mrs Byre captured the green lights over the horizon near her home on April 1 and posted the five-hour time-lapse to Instagram.

In the US, the National Oceanic and Atmospheric Administration had issued a G3 warning for March 31, referring to a ‘strong’ geomagnetic storm, but said there would be ‘continuing, but weakening, CME influences’ up to April 1.

The Met Office said the coronal mass ejections (CMEs) were launched from the Sun on March 28, and that solar activity had been ‘at high levels over the past 24 hours’. 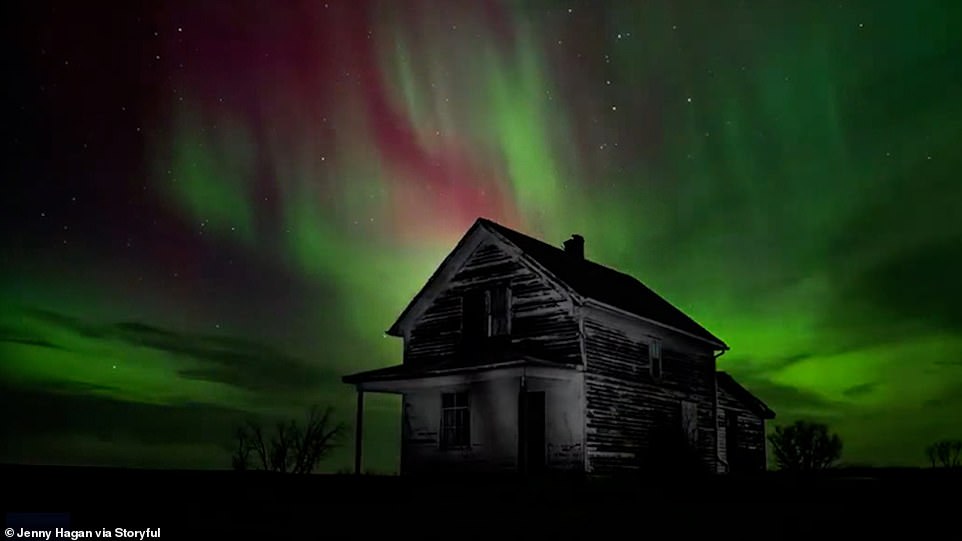 The aurora borealis pictured here over a rural cabin in central Saskatchewan, Canada, taken on March 30 by photographer Jenny Hagan 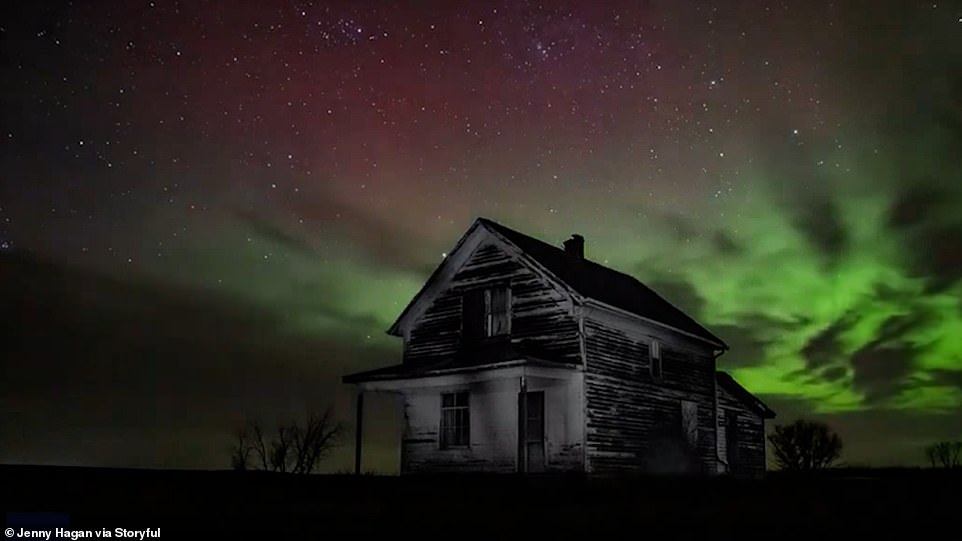 Auroras happen when electrically charged particles from the sun enter the Earth’s atmosphere. Usually the particles are deflected by Earth’s magnetic field. But during stronger storms they enter the atmosphere and collide with gas particles, including hydrogen and helium. These collisions emit light. Auroral displays appear in many colours although pale green and pink are common

WHAT IS A ‘CANNIBAL’ SOLAR ERUPTION?

Sunspots are areas on the sun’s surface where powerful magnetic fields, created by the flow of electrical charges, become tangled and eventually release a huge explosion of energy that results in a solar flare.

CMEs usually take around 15 to 18 hours to reach Earth.

In the Earth’s north, the Northern Lights are officially known as the aurora borealis and in the south it is called the aurora australis.

The light display is created by disturbances in Earth’s magnetosphere caused by solar events, usually concentrated around the Earth’s magnetic poles.

As well as CMEs, such solar events include solar flares – explosions on the Sun that happens when energy stored in ‘twisted’ magnetic fields is released.

NASA explains: ‘There are many kinds of eruptions on the sun. Solar flares and coronal mass ejections both involve gigantic explosions of energy, but are otherwise quite different.

‘The two phenomena do sometimes occur at the same time – indeed the strongest flares are almost always correlated with coronal mass ejections – but they emit different things, they look and travel differently, and they have different effects near planets.’

Particles from the solar events can travel millions of miles, and some may eventually collide with the Earth.

According to Royal Museums Greenwich, most of the particles are deflected, but some become captured in the Earth’s magnetic field.

They’re accelerated down towards the north and south poles into the atmosphere – which is why an aurora best seen when nearer the magnetic poles. 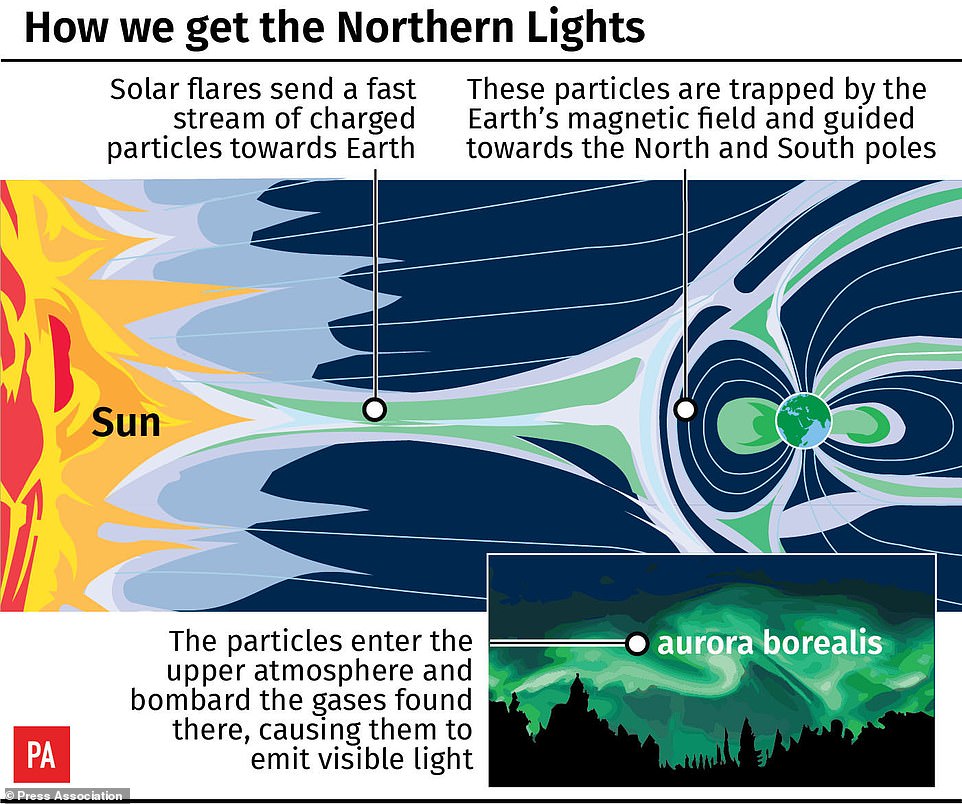 The stunning display of lights we see in the night sky, both in the northern and southern hemispheres, are caused by wild activity on the surface of the Sun

A solar flare is a tremendous explosion on the Sun that happens when energy stored in ‘twisted’ magnetic fields (usually above sunspots) is suddenly released.

In a matter of just a few minutes they heat material to many millions of degrees and produce a burst of radiation across the electromagnetic spectrum, including from radio waves to x-rays and gamma rays.

Solar flares are different to ‘coronal mass ejections’ (CMEs), which were once thought to be initiated by solar flares.

CMEs are huge bubbles of gas threaded with magnetic field lines that are ejected from the Sun over the course of several hours.

‘These particles then slam into atoms and molecules in the Earth’s atmosphere and essentially heat them up,’ said Royal Observatory astronomer Tom Kerss.

‘We call this physical process “excitation”, but it’s very much like heating a gas and making it glow.’

The aurora has fascinated Earthlings for centuries, but the science behind it has not always been understood.

Earth has an invisible forcefield, the magnetosphere, that protects us from dangerous charged particles from the Sun.

The magnetosphere is the area around Earth controlled by the planet’s magnetic field.

Science expert Marty Jopson explains: ‘Whilst it shelters us, it also creates one of the most impressive phenomena on Earth – the Northern Lights.’

‘When the deadly solar winds meet Earth’s magnetosphere, some of the charged particles get trapped, and are propelled down the Earth’s magnetic field lines straight towards the poles.

‘And when they reach Earth, they strike atoms and molecules in our atmosphere, releasing energy in the form of light.’

The problem is disruption to our magnetic field creates solar storms that can affect satellites in orbit, navigation systems, terrestrial power grids and data and communication networks.

‘Harmful space weather has affected Earth before, but as we become increasingly reliant on systems and technologies vulnerable to the Sun’s outbursts, future solar impacts could be even more disruptive,’ says the European Space Agency (ESA).

Solar storms, or solar activity, can be divided into four main components that can have impacts on Earth:

While these may seem dangerous, astronauts are not in immediate danger of these phenomena because of the relatively low orbit of manned missions.

However, they do have to be concerned about cumulative exposure during space walks.

This photo shows the sun’s coronal holes in an x-ray image. The outer solar atmosphere, the corona, is structured by strong magnetic fields, which when closed can cause the atmosphere to suddenly and violently release bubbles or tongues of gas and magnetic fields called coronal mass ejections

The damage caused by solar storms

Solar flares can damage satellites and have an enormous financial cost.

Very large flares can even create currents within electricity grids and knock out energy supplies.

When Coronal Mass Ejections strike Earth they cause geomagnetic storms and enhanced aurora.

A large influx of energy could flow into high voltage power grids and permanently damage transformers.

This could shut off businesses and homes around the world.