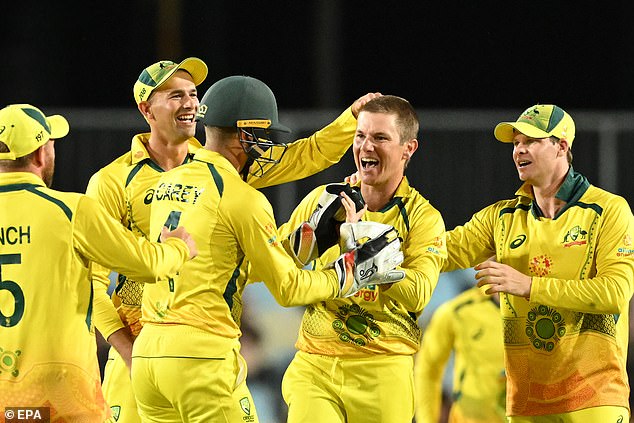 Adam Zampa took his first five-wicket haul in one-day international cricket when Australia won the series against New Zealand after a 113-run victory on Thursday.

Australia’s top order struggled, dropping to 54-5 after being sent in, but the home side came in at 195-9. Steve Smith scored 61 and the last wicket pair of Mitchell Starc (38) and Josh Hazlewood (23) combined for an unbeaten 47.

New Zealand was skittled for 82 in response, with leg pinner Zampa returning 5-35 from nine overs, including three lbw decisions.

“I haven’t tried my best to be honest, but sometimes it is,” Zampa said. ‘It feels good. To win any series, but especially against the number 1 in the world, they are the benchmark at the moment.”

Australia won the series opener by two wickets, despite being in serious trouble last weekend at 44-5 and chasing 233 for the win.

Conditions on the pitch in Cairns were difficult as the ball didn’t hit the bat so quickly.

“It’s been difficult. The first 40 overs of our at bat were incredibly difficult,” said Australian captain Aaron Finch. ‘We knew we had reached a total that we could defend’ [but] we knew we had to be ultra-disciplined with the ball, and we did. Nice win.’ 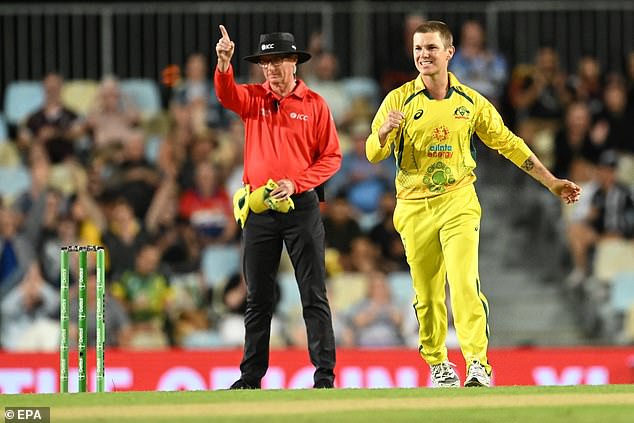 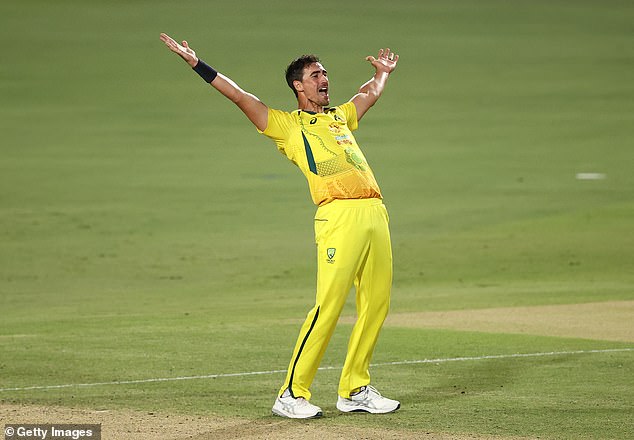 Starc immediately pushed through with the fifth ball of New Zealand’s response, as Martin Guptill chased a full swing away and slid to Finch on a slip.

Starc and new ball partner Hazlewood kept up the pressure until a change in bowling when Sean Abbott opened his account with a double-wicket maiden in the ninth left.

Abbott seduced Devon Conway (5) in a legside chip to Zampa on fine leg with his second throw from around the wicket, then let Tom Latham (0) slide to Finch three balls later. New Zealand dropped to 14-3.

Kane Williamson, who was given a reprieve in the first over when he was lucky enough not to run out, dug in for 17 of 58 deliveries before being caught by Zampa over lbw in the 19th and New Zealand was 33-4. 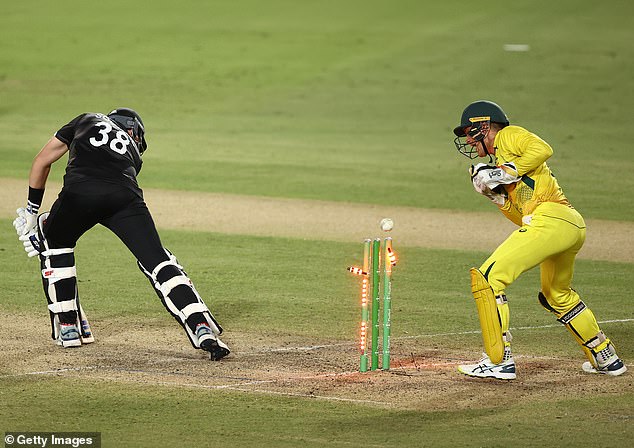 The visitors crumbled to 82, despite chasing a modest 195 in Cairns

The visitors’ problems were compounded when Daryl Mitchell (10) was out with five additions to the total after being assessed as lbw in an attempted reverse sweep against Zampa, and Jimmy Neesham (2) moved on to take the next to make it 45-6. .

Starc removed Michael Bracewell (12) and Zampa chose Tim Southee, Matt Henry and Trent Boult (9) to round it out.

“Australia was excellent with the ball and gave us nothing,” said New Zealand captain Williamson. “The surface was a challenge and 180 was going to be very hard work. Fair play to Australia. They outplayed us today.’

The New Zealanders had a right to be confident after Boult took 4-38 and held the catch to remove Smith to keep Australia’s total under 200. 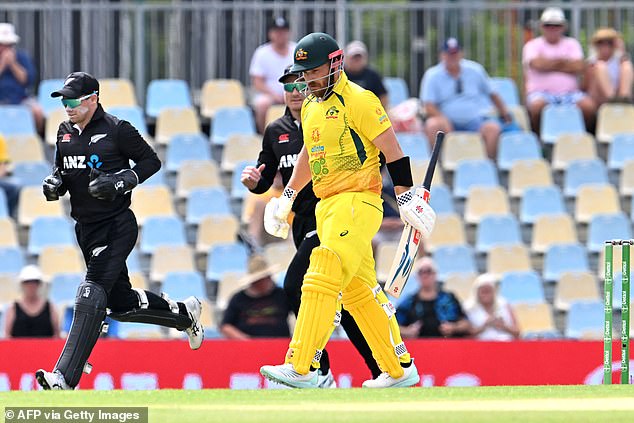 Australian captain Aaron Finch took off for a duck, his fifth this calendar year 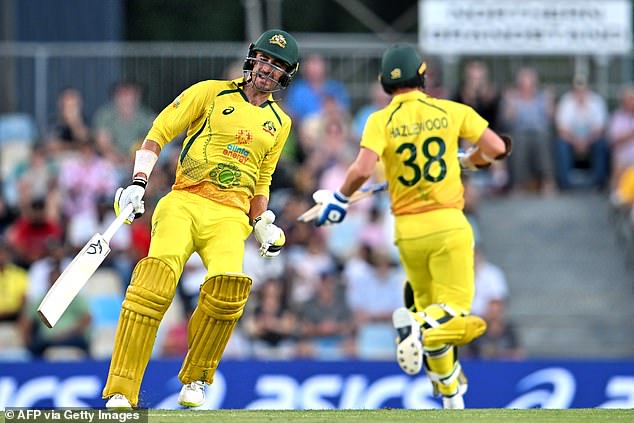 But for the second straight game, New Zealand bowled the specialist batters, but Australia saved the innings thanks to Smith’s 61 of 94 deliveries – his third slowest half-century in ODIs – and contributions from Glenn Maxwell (25) at center and Starc and Hazlewood at the end.

Henry (3-33) started Australia’s woes in the second over, sending Finch away without a run on the board.

It continued a rough patch for Finch, who fell to his third duck in seven ODIs giving him just 26 runs. Finch tried to attack Henry’s second throw and only managed to take out Williamson half way through.

Henry and Williamson teamed up to take out David Warner (5) in the same way before Boult tricked Marnus Labuschagne (5) and Marcus Stoinis (0), with fuller deliveries slamming the seam. 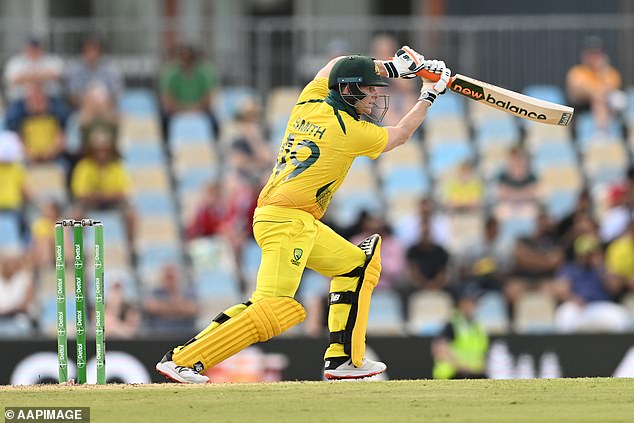 Steve Smith scored the best for Australia with 61, as the top order faltered around him

Both batters wasted video reviews to challenge on-field decisions that were clearly out, leaving Australia without references for the rest of the innings.

Smith and Maxwell put up 49 for the sixth wicket to bring the total to triple digits before Smith lunged at Boult and was caught in the outfield by a diving Guptill.

Starc was granted a reprieve after New Zealand failed to review an lbw non-ruling that would have led to his dismissal. He attacked late bowling as Australia added 44 in the last five overs.

The third and final ODI is in Cairns on Sunday.