Indianapolis Colts owner Jim Irsay was in an old-fashioned bidding war back on May 22.

Kurt Cobain’s guitar from Nirvana’s 1991 ‘Smells Like Teen Spirit’ music video was up for auction in Las Vegas, where acolytes of the 62-year-old billionaire were ready spend as much as $3.75 million on the piece at Irsay’s direction.

That Irsay was actually sleeping in Hawaii when he received the text message, and now has Cobain’s left-handed 1969 Fender Mustang resting on his lap, sums up his life as a wealthy collector. Irsay sets his price before the bidding even starts (in this case, $3.75 million, or $4.4 million with auction fees included) and then sits back and lets the universe take care of the rest.

‘If the [other bidder] would have gone to $4 million, I would have been out because I was asleep,’ Irsay said.

Speaking between drags of his cigarette from a midtown-Manhattan hotel room, Irsay was preparing to exhibit his extensive collection of rare music memorabilia in New York on Friday. 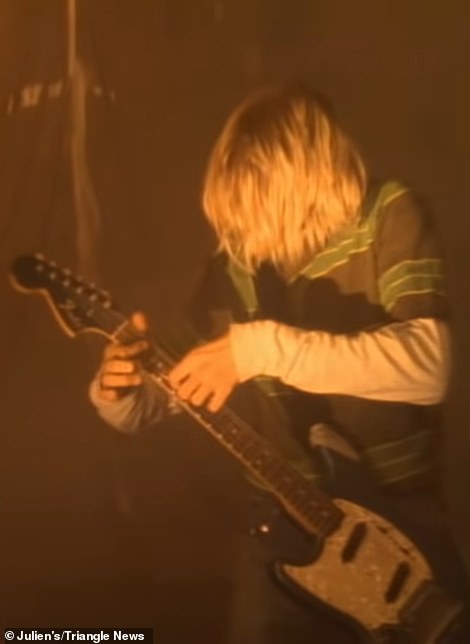 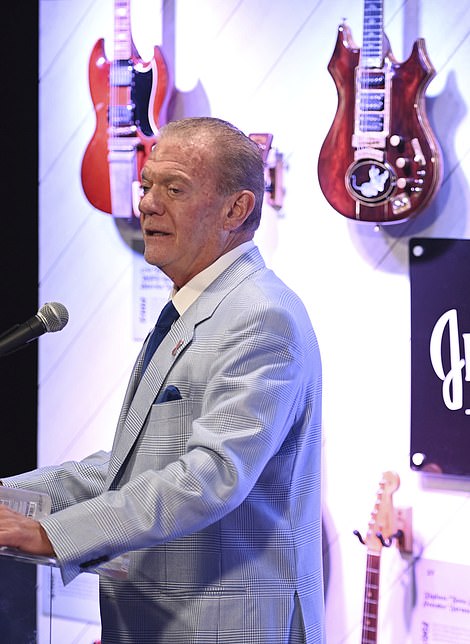 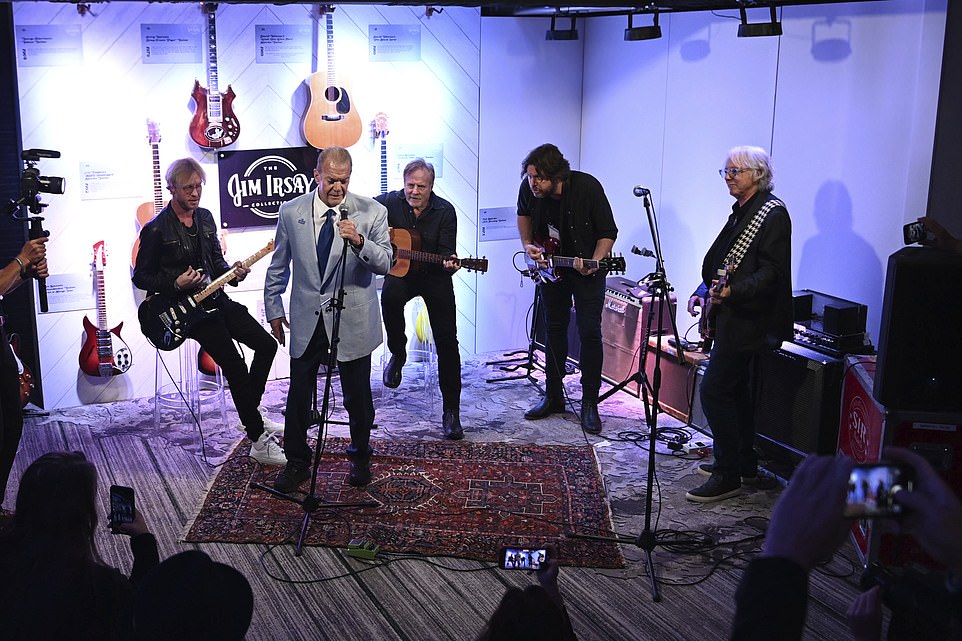 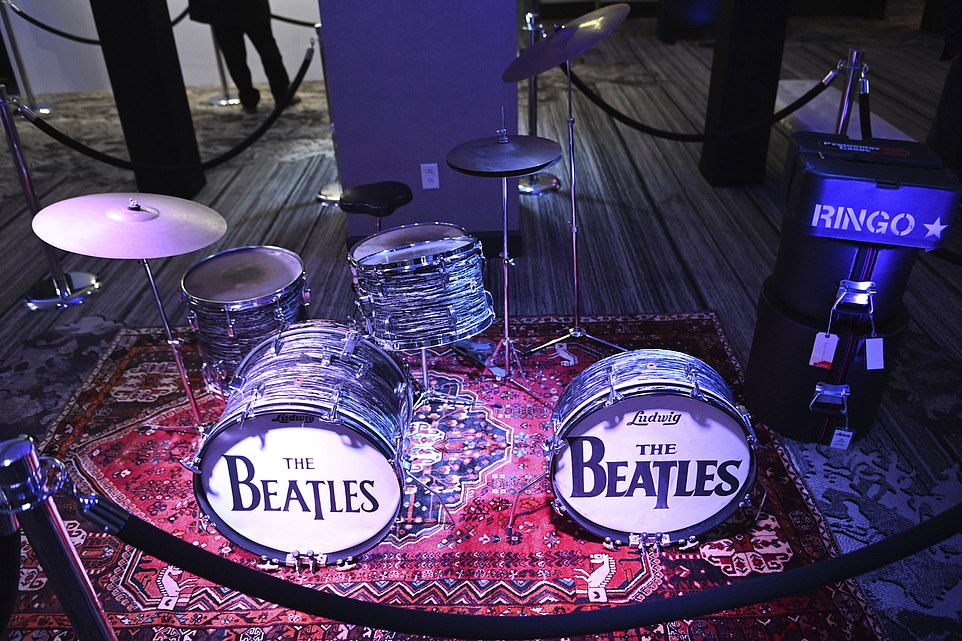 Irsay outbid late Microsoft co-founder Paul Allen for Ringo Starr’s drum kit, which will be in display in New York on Friday

The half-day event at Manhattan’s Hammerstein Ballroom is free to the public and features everything from John Lennon’s piano, used to write ‘A Day in the Life,’ to Irsay’s newly acquired Fender. There are also other forms of rare collectibles too, like one of Jackie Robinson’s game-used bats and Jack Kerouac’s ‘On The Road’ manuscript.

Obviously the collection would be impossible without Irsay’s fortune, much of which comes from his family’s heating and cooling (HVAC) empire, not to mention the Colts, a team his late father bought in Baltimore in 1972 before famously moving the franchise to Indianapolis nine years later.

But the Jim Irsay Collection, as its known on its cross-country tour, was also made possible by his intuition — a self-professed ability to predict the market and submit the winning bid at an incrementally higher price.

‘I’ve been doing it for 25 years, and I would say I’m one of the only people who can peg these things pretty close,’ Irsay said.

The strategy relies more on Irsay’s own personal mysticism than any data-driven analysis.

‘It’s not really as much as the intellect of the mind; it’s more of the spirit and what comes to me,’ said Irsay, who could easily be mistaken for a country music mogul in his black sunglasses and grey Stetson.

In 2015, Irsay’s personal $2.2 million limit for Ringo Starr’s drum kit proved prescient. He not only submitted the winning offer at that price, but narrowly — and unknowingly — outlasted a wealthier bidder in Paul Allen.

The late Microsoft co-founder and Seattle Seahawks owner was a good friend of Irsay’s and an accomplished collector as well. So when the Colts boss saw Allen at an event in the following days, Irsay figured he should offer a ‘thank you’ to Allen, whom he mistakenly assumed had stayed out of the bidding. After all, Allen, with his $20-billion fortune, could have easily out-spent Irsay if he were so inclined. 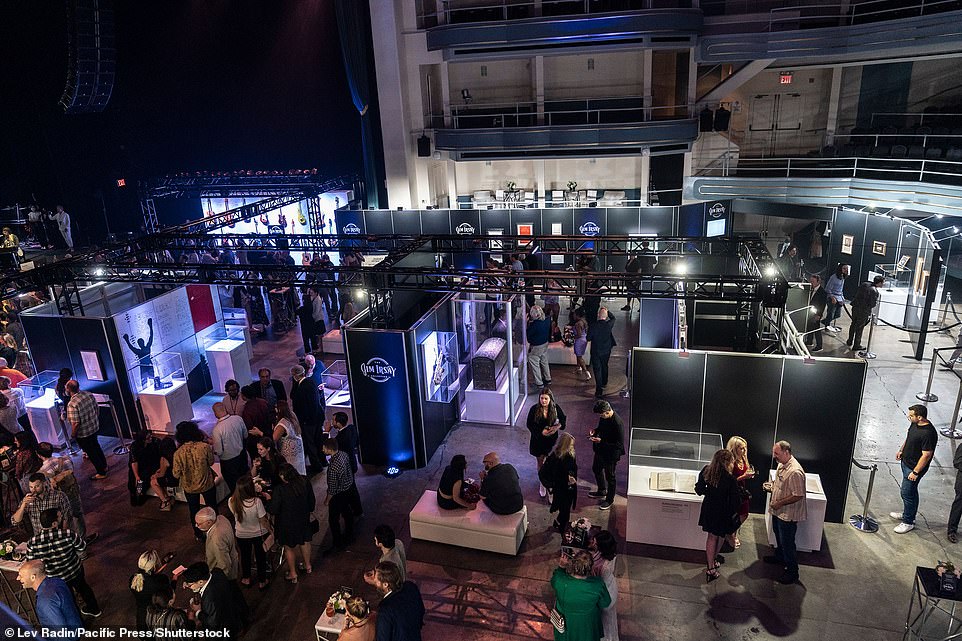 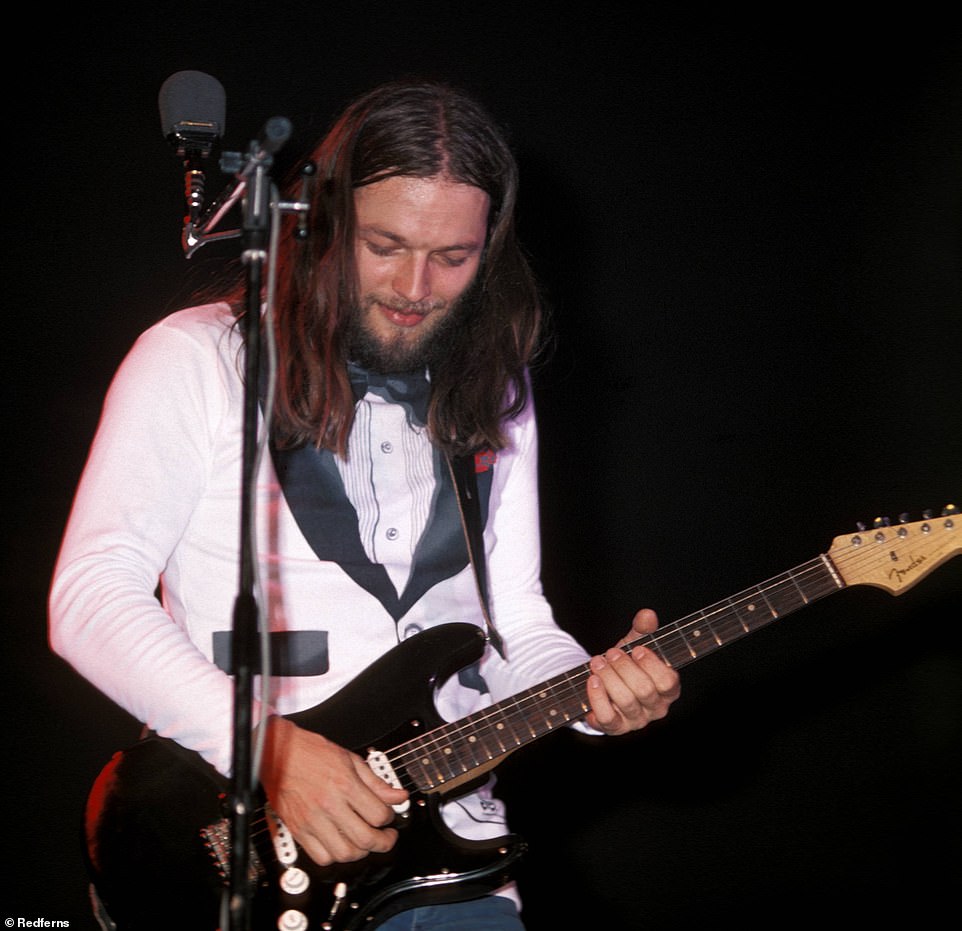 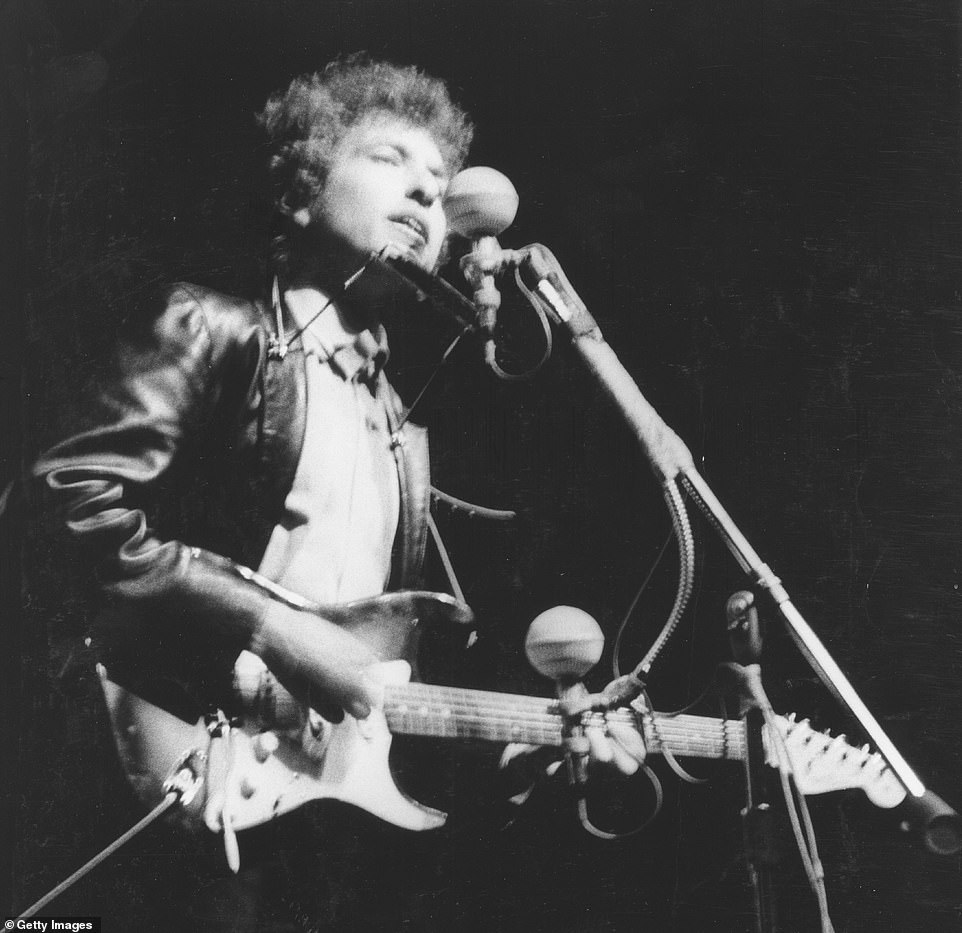 Bob Dylan plays a Fender Stratocaster electric guitar for the first time on stage as he performs at the Newport Folk Festival on July 25, 1965 in Newport, Rhode Island. The moment proved to be a major turning point for rock music, and the guitar Dylan used is Irsay’s favorite of his collection: ‘If I had to pick one, and it’s awfully hard, I would say probably Bob Dylan’s Strat that he plugged in at the Newport Folk Festival in 1965 and changed music, turned it electric. Back stage, Pete Seeger was trying to cut the wires. That changed music, that brought ‘Rubber Soul’ with the Beatles. It just changed the world

The following are just a few of the guitars in Jim Irsay’s collection:

‘I said, ”Paul, hey man, thanks for not bidding on those drums, I appreciate it,”’ Irsay said.

As it turned out, though, Allen was in the bidding. He just wasn’t willing to cross Irsay’s $2.2 million threshold.

‘Allen said: ”What do you mean? I was bidding on it. You outbid me.”

‘Thankfully [Allen] wasn’t in an ornery mood [during the auction], because if we really got into a bidding war, I couldn’t have lasted.’

There was, of course, a learning curve for Irsay, who was a little too flippant with the bidding paddle at his first Christie’s auction in New York years earlier.

‘I had drunk enough liquor to float a battleship around before that auction,’ he said. ‘I was much younger in those days, and I had this paddle and I had never done this in New York at Christie’s.

‘People probably thought, ”That guy’s crazy, we’re not bidding.” I had never done it before, and that was a great experience.’

Irsay’s intuition admittedly fell short in 2019, when he paid a record $4 million for Pink Floyd guitarist David Gilmour’s ‘Black Strat’ — a Fender Stratocaster that was drawing bids from 61 different countries.

Until then, an acoustic Gibson once owned by the Beatles’ Lennon was the world’s most expensive guitar, selling at auction in 2015 for $2.4 million.

Irsay hadn’t expected to top that, but Gilmour’s guitar was suddenly garnering much higher bids.

‘I went into that thing, and I was pretty determined to get it, but I really didn’t know what was going to happen,’ said Irsay, who was actually awake and personally participating in that auction. ‘When it got to over $4 million, it was crazy. I didn’t anticipate that. It was a lot of adrenalin.’

Irsay has his limits, though.

He once offered to buy Cobain’s acoustic guitar from the famed ‘MTV: Unplugged’ set, but when the seller instead opted to put it up for auction, Irsay backed away.

Ultimately the guitar was auctioned off for a record $6 million to Australian entrepreneur Peter Freedman.

‘This crazy Australian billionaire bid $6 million dollars on it,’ Irsay said. ‘All of us in the guitar-collecting business were like: ”What? That’s insane.”’ 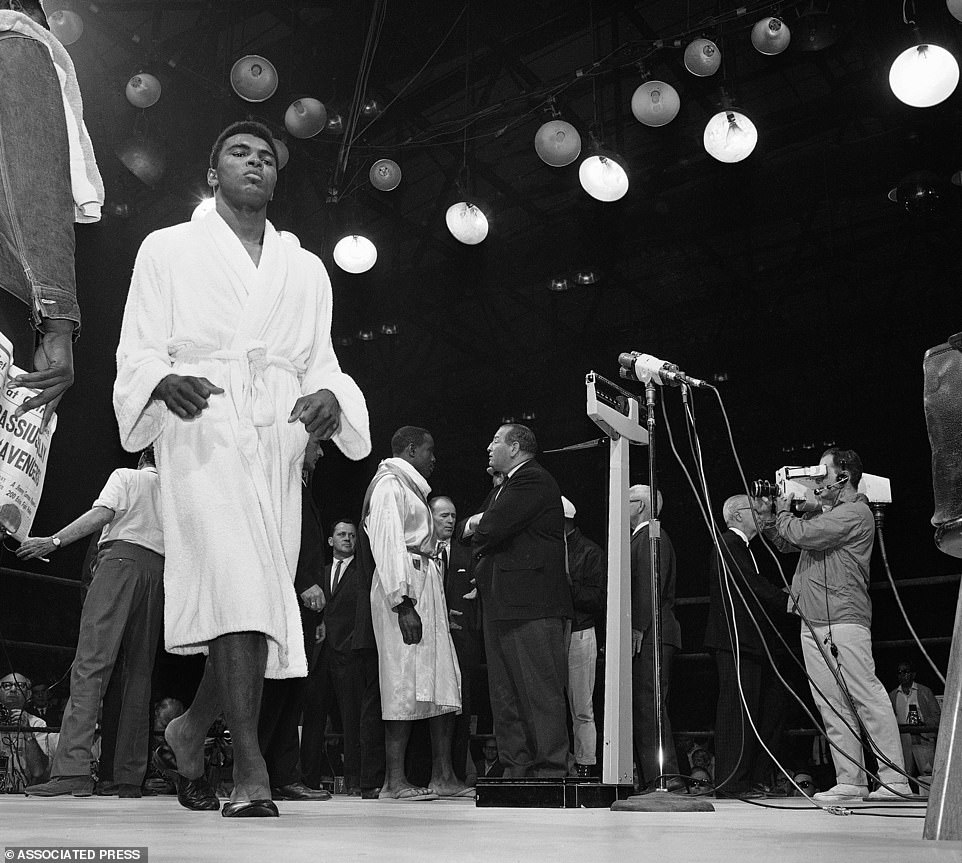 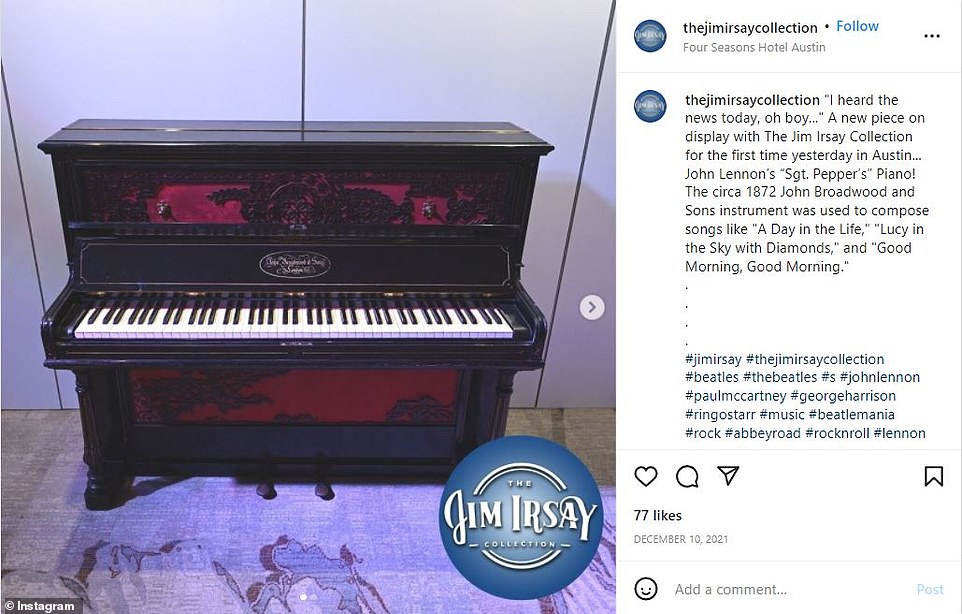 Irsay told DailyMail.com that his favorite piece is John Lennon’s piano: ‘I’d say John Lennon’s piano is probably my favorite thing that I have, musically. It was in his place, in his flat. He wrote Sgt. pepper’s on it. It’s amazing to have that piece of history because Lennon was so major’ 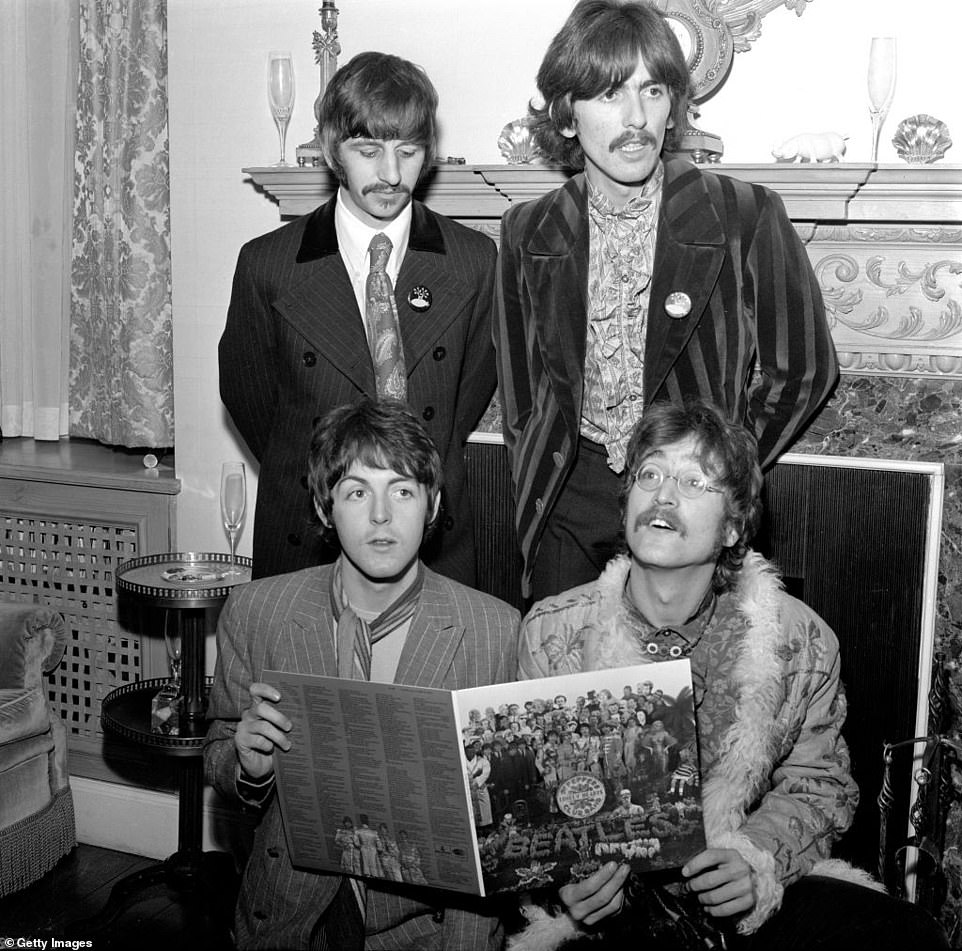 Much of Irsay’s collection centers around his lifelong passion for the Beatles. He owns instruments from all four members 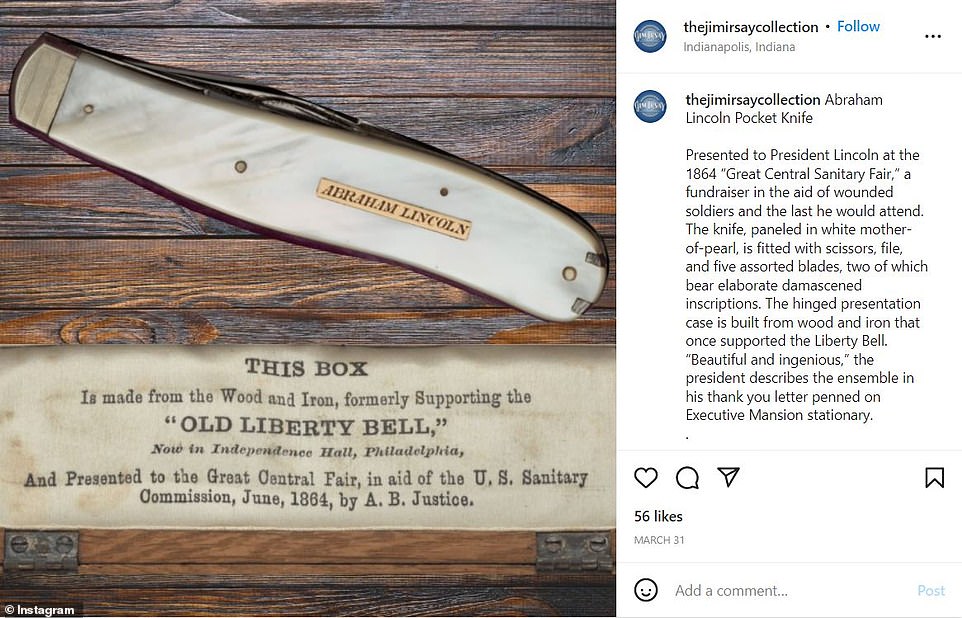 Irsay’s interests extend to American history as well, which is why he’s included items like Abraham Lincoln’s pocket knife 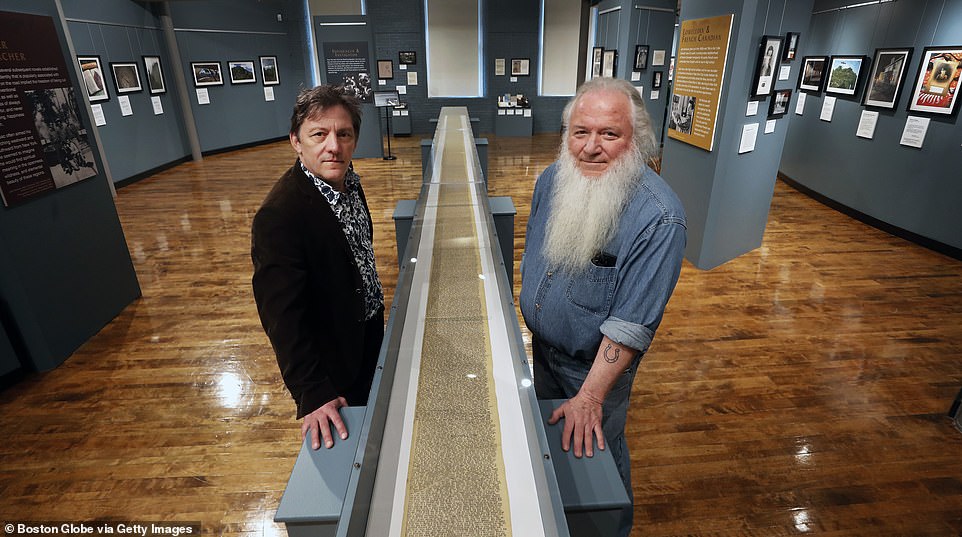 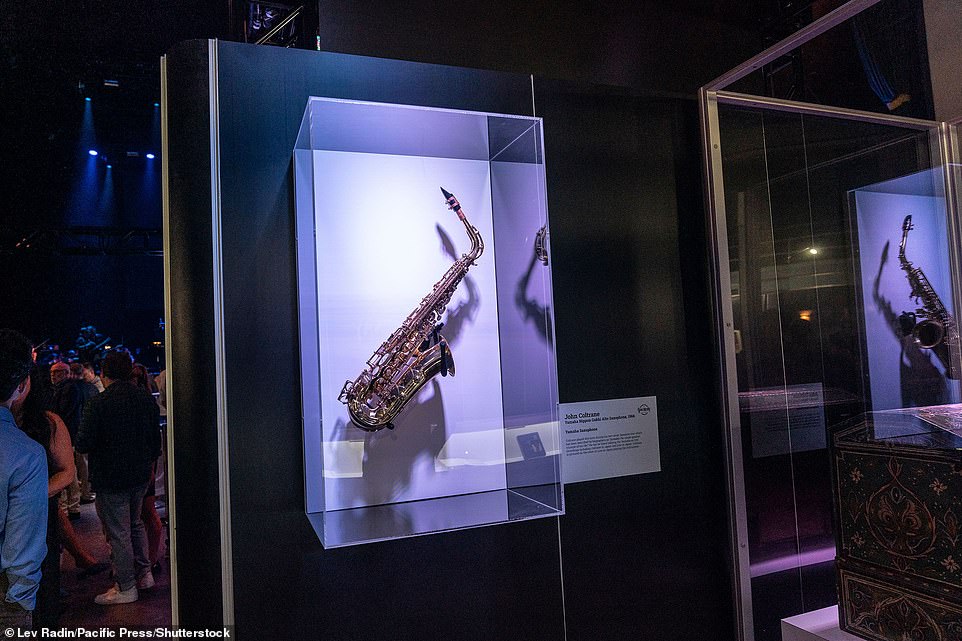 To Irsay, his collection is more than just a hobby.

For one, it’s a chance to promote his charity, the Kicking the Stigma initiative, which is aimed at raising mental health awareness. In fact, Cobain’s family donated a portion of the proceeds to the organization, which has already raised more than $16 million since 2020 to help fight the stigma of mental illness. (Cobain committed suicide in 1994 after years of mental health and substance abuse issues)

It’s also an excuse for Irsay to immerse himself in the lives of his heroes, like the evening he spent with Lennon’s dear cousin in London.

‘Lovely guy, and his wife came and it was cool,’ Irsay said.

Mostly, though, Irsay is drawn to collecting because he believes these instruments are more than just inanimate keepsakes. He described caressing Cobain’s 53-year-old Fender, saying: ‘With your fingertips, you try to sense its energy.’

As he sees it, the former owners are still connected to the pieces from beyond the grave, and his role is to preserve everything until humanity is ready to reveal the secrets within.

‘These things will come alive some day,’ Irsay said. ‘Trust me, you and I won’t be here, but 400 years from now, they’ll be able to have a hologram connected to this, and it will tell all the stories of the places [the instrument] was.

‘It sounds ridiculous,’ he added. ‘I know what the future can bring. And these will become not inanimate objects. They will become alive again.’

Kurt Cobain’s iconic Smells Like Teen Spirit guitar sold for a staggering $4.55 million after a bidding war won by Indianapolis Colts owner Jim Irsay on May 22.

The electric guitar was also used by the tragic rock star in the music video for the song. 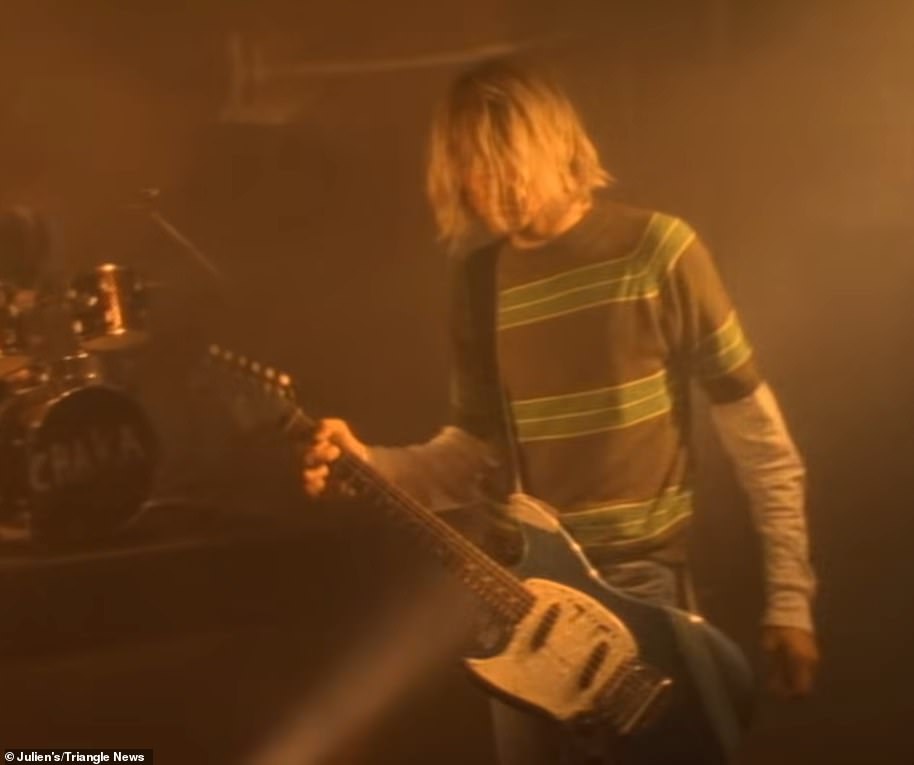 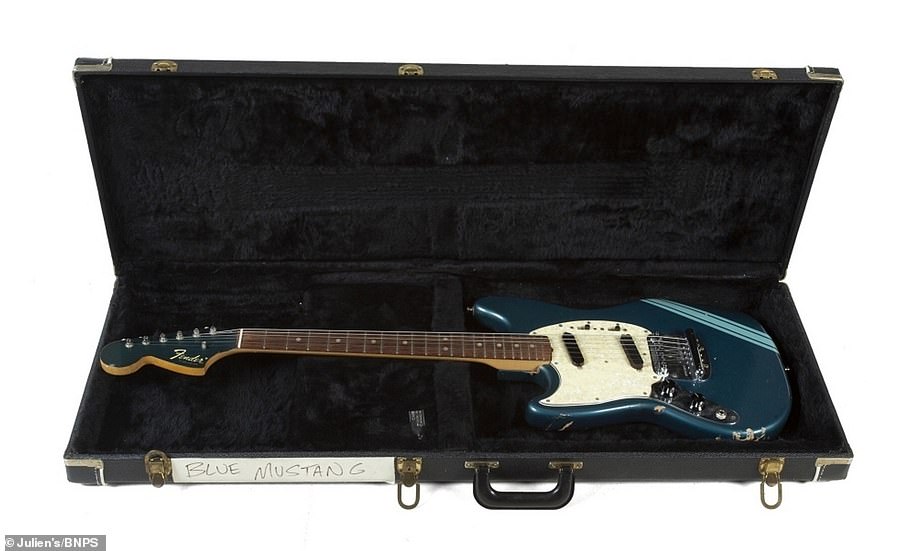 The guitar, case and strap sold for seven times its $642,0000 estimate with Julien’s Auctions in California

The instrument, which Cobain acquired from a Los Angeles guitar shop in 1990, was later used in many live Nirvana performances.

The guitar, case and strap sold for seven times its $642,0000 estimate with Julien’s Auctions in California.

Cobain said of it in his final interview with Guitar World: ‘I’m left-handed, and it’s not very easy to find reasonably priced, high-quality left-handed guitars.

‘But out of all the guitars in the whole world, the Fender Mustang is my favourite. I’ve only owned two of them.’

Irsay, 62, who is worth an estimated $3.5billion, is a major guitar collector, having bought instruments previously owned by Elvis Presley, George Harrison, Prince, Bob Dylan and David Gilmour, among others.

He said: ‘I am thrilled to preserve and protect another piece of American culture that changed the way we looked at the world.’

The Cobain family will donate a portion of the proceeds of the sale to a mental health initiative run by the Irsays, Kicking The Stigma.

The auctioneers said the sale of Cobain’s guitar was a ‘once-in-a-lifetime’ event.

Darren Julien, chief executive officer of Julien’s Auctions, said: ‘To have this legendary guitar, one of the most culturally significant and historically important guitars of Kurt Cobain and in all of rock music history to return to Indiana to be part of Jim Irsay’s renowned memorabilia collection is a great honor and personal highlight of my life.

‘This once-in-a-lifetime auction has been one of the greatest privileges in my professional career and I’m duly pleased that the proceeds will also bring much needed attention to mental health awareness.’

The 1959 Martin D-18E – which was often out of tune – was expected to fetch between $1million and $2 million at the online ‘Music Icons’ sale hosted by Julien’s Auctions, but it ended up breaking the record for the most expensive guitar.

The lot came with the guitar case the Smells Like Teen Spirit group’s late frontman used, which has a poster of Poison Idea’s album Feel the Darkness on it, whilst inside is a bunch of guitar strings, picks and a ‘stash’ bag.

Kurt married Courtney Love of Hole fame in 1992; together they had daughter Frances Bean who is now 27-years-old.

Rats to the rescue: Rodents are trained to enter the earthquake rubble to find survivors