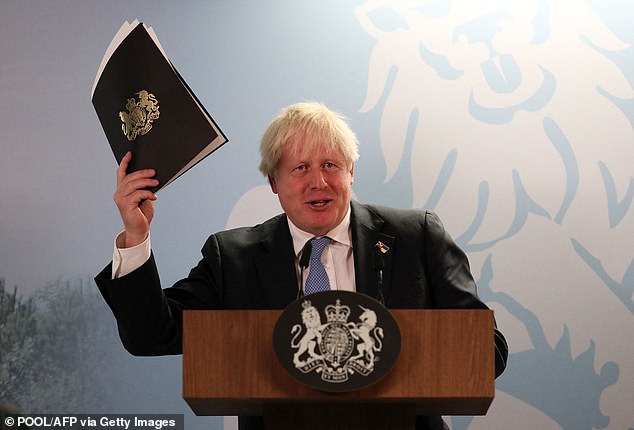 ‘Go nuclear, go big’: Boris confirms £700m investment in Sizewell C as prime minister uses latest major speech to insist it would be ‘madness’ not to go ahead with nuclear power after Putin’s invasion in Ukraine

Boris Johnson today urged his successor to ‘go nuclear, get big’ as he pledged a £700m investment in the proposed Sizewell C plant in Suffolk.

In what will likely be his last major policy speech as prime minister, the outgoing prime minister said he was “absolutely sure it will cross the line in the coming weeks.”

Johnson warned it would be “absolute madness” not to proceed with the nuclear project as Russian President Vladimir Putin wreaks havoc on global oil and gas markets.

He also expressed confidence that his successor – be it Liz Truss or Rishi Sunak – would give up the “short-term thinking” that has hampered previous government thinking about Britain’s energy security.

In defense of his three years in power, Mr Johnson said: “This administration has not evaded the big decisions, we have raised our eyes, we have looked to the horizon.

“Whoever follows me next week, I know they will do the same.

‘No more national myopia, no more short-term thinking, let’s think about the future, about our children and grandchildren, about the next generation.

“I tell you with prophetic candor and clarity with one about to pass the torch of office, I say go nuclear, go big and go with Sizewell C.”

With Britons facing rising energy prices this winter – in a crisis exacerbated by the Russian attack on Ukraine – Mr Johnson lamented that other nuclear projects had not yet been realised.

He insisted that if the much-delayed Hinkley Point C, currently under construction in Somerset, was ‘already in use’ this year, it would ‘cut fuel bills by £3bn’.

“That’s why we need to lift our finger and move on to Sizewell C,” he added.

“That’s why we’re putting £700m into the deal, only part of the £1.7bn of public funding available to develop a large-scale nuclear project up to the final investment stage… in this Parliament.

Mr Johnson also appeared to be taking a swipe at Ms Truss, who is widely expected to replace him as prime minister next week, after the Secretary of State recently vowed to undo his fracking ban if she took office.

He said: ‘I say to anyone who thinks that hydrocarbons are the only answer, we need to fracking and all, offshore wind is now the cheapest form of electricity in this country.

‘This is awesome’: travel expert shares key hack for choosing the best seats on the flight