Boris Johnson could face a Tory leadership challenge every three months under a new plans to cut the time-limit on no confidence votes, it is understood.

Sir Graham Brady, the chairman the powerful Tory 1922 Committee, has ‘taken soundings’ from Conservative party members on cutting the time-limit from a year to three to six months, reports The Sun.

Sir Graham is reportedly considering reducing the time limit – or axing the limit altogether – amid the controversy over Partygate.

Speculation has reached fever pitch over the scandal, with Conservative critics racking up.

Concerns could have been further fuelled by apparent booking for Mr Johnson as he arrived for the Queen’s Platinum Jubilee service on Friday morning – although there were also cheers.

Boris Johnson (pictured at St Paul’s church for the Platinum Jubilee celebrations with his wife Carrie on Friday) could face a Tory leadership challenge every three months under a new plans to cut the time-limit on no confidence votes, it is understood 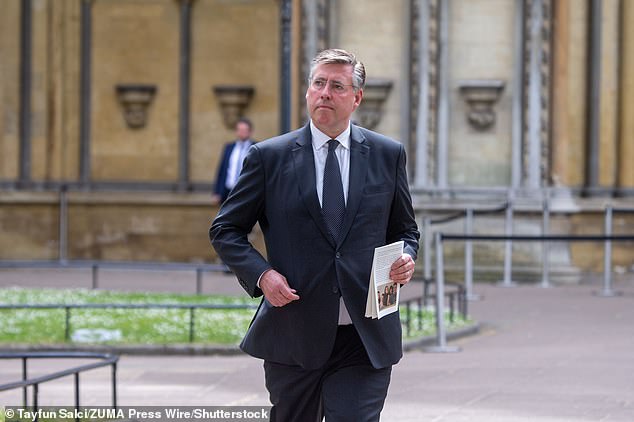 Sir Graham Brady, the chairman the powerful Tory 1922 Committee, has reportedly ‘taken soundings’ from Conservative party members on cutting the time-limit from a year to three to six months

In order to trigger a confidence vote, 54 letters from Conservative MPs must be submitted to Sir Graham.

Under current rules, if Mr Johnson won a vote of no confidence, the Prime Minister would be immune to another for a year.

But under the new reported plans, the limit could be reduced to three months – meaning Mr Johnson could face a rolling leadership threat.

How could Boris Johnson be ousted by Tory MPs?

What is the mechanism for removing the Tory leader?

Tory Party rules allow the MPs to force a vote of no confidence in their leader.

How is that triggered?

A vote is in the hands of the chairman of the Tory Party’s backbench 1922 Committee, Sir Graham Brady.

A vote of no confidence must be held if 15 per cent of Tory MPs write to the chairman. Currently that threshold is 54 MPs.

Letters are confidential unless the MP sending it makes it public. This means only Sir Graham knows how many letters there are.

What happens when the threshold is reached?

A vote is held, with the leader technically only needing to win support from a simple majority of MPs

But in reality, a solid victory is essential for them to stay in post.

What happens if the leader loses?

The leader is sacked if they do not win a majority of votes from MPs, and a leadership contest begins in which they cannot stand.

However, they typically stay on as Prime Minister until a replacement is elected.

Sources close to Sir Graham denied that such plans are being considered by the chairman. The Conservative Party have been contacted for comment.

It comes as the Tory revolt against Mr Johnson is threatening to descend into chaos as MPs squabble over Brexit and how soon to launch a coup.

The rebellion does not appear to be well coordinated, and anti-Boris factions are split on how soon to make their move.

Some MPs fear that Mr Johnson will win easily if the threshold of 54 no-confidence letters is hit on Monday or Tuesday, triggering a full ballot. Instead they are urging colleagues to hold off until after two crunch by-elections on June 23.

Meanwhile, ringleaders are embroiled in bitter infighting after former minister Tobias Ellwood suggested the UK should rejoin the EU’s single market, even if it means accepting the free movement of people.

Foreign Affairs committee chair Tom Tugendhat, who has openly said he wants to be the next leader, quickly distanced himself from the stance.

‘Tobias is wrong. The Single Market puts the EU in charge,’ he tweeted. ‘We need a deal British people control not foreign laws with no say.’

Ex-chief whip Mark Harper, who has himself submitted a letter calling for Mr Johnson to face a confidence vote, also dismissed the idea.

‘The UK voted to leave the EU. That meant leaving the Single Market and putting an end to freedom of movement. The end,’ he tweeted.

Under Conservative party rules, Mr Johnson will face a confidence vote amongst Tory MPs if 54 write to Sir Graham, chairman of the 1922 committee, demanding one.

While only around 20 MPs have publicly indicated they have sent letters, many more have been critical. Some might have . 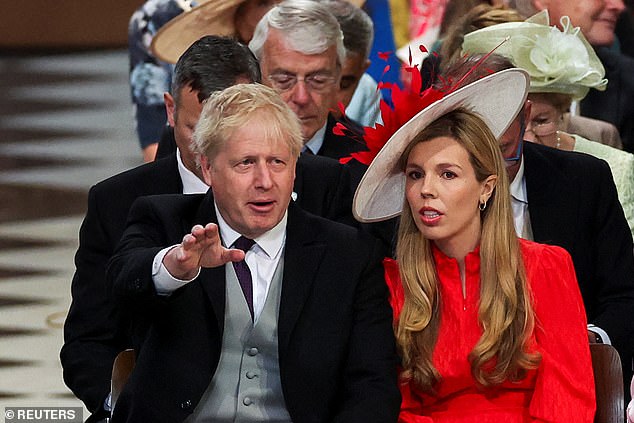 How many MPs have sent no-confidence letters?

It is hard to gauge accurately how close we are to the threshold of 54 no-confidence letters sent to the 1922 committee. That is the number that would trigger a full vote.

Some MPs have publicly announced sending a letter – although even that does not guarantee they really have.

Others have been heavily critical, or even called for Mr Johnson to resign, without confirming letters.

Then there are thought to be letter-writers who have not spoken out.

And two of the MPs declared as having sent letters are urging Mr Johnson to have a vote to clear up speculation, rather than saying he should definitely be ousted.

At least one MP who previously submitted a letter – Charles Walker – has since withdrawn it.

Here are the MPs who have definitely sent a letter:

Caroline Nokes – ‘I have not withdrawn the letter… I wrote months ago… because to do so would be letting down all of those people who spent the pandemic doing the right thing.’

Andrew Bridgen – resubmitted the letter he previously withdrew following ‘further revelations over the past week’.

Aaron Bell – ‘I wrote my letter following PMQs on 12 January, when I could not square the prime minister’s words from the dispatch box with his previous statements to the house before Christmas.’

Peter Aldous – ‘I have therefore written to the Chairman of the 1922 Committee of Backbench Conservative MPs, advising him that I have no confidence in the Prime Minister.’

Steve Brine – ‘All I can do as a backbencher is seek to trigger that process and (some time ago actually) I have done that.’

Elliot Colburn – nothing ‘has convinced me that my decision to submit a letter to the 1922 Committee (which I did some time ago) was the wrong one’.

Tobias Ellwood – ‘You can’t ignore the fact that our party lost its way.’

Roger Gale – ‘I have already indicated publicly that I have submitted a formal letter to the Chairman of the 1922 Committee calling for a Leadership Election.’

Nick Gibb – ‘We need to face up to hard truths. To restore trust, we need to change the Prime Minister.’

Mark Harper – ‘I have formally submitted a letter of no confidence in the prime minister to Sir Graham Brady MP.

Anne-Marie Morris – ‘Given my increasing displeasure with the ongoing events in the latter part of 2021, I submitted a letter of no confidence to Sir Graham Brady before Christmas.’

Anthony Mangnall – ‘His actions and mistruths are overshadowing the extraordinary work of so many excellent ministers and colleagues.’

Bob Neill – ‘With a heavy heart, I submitted a letter of no confidence to Sir Graham Brady.’

John Stevenson – ‘The only option is for Conservative MPs to facilitate a vote of confidence. I have already taken the appropriate action.’

Gary Streeter – ‘I cannot reconcile the pain and sacrifice of the vast majority of the British public during lockdown with the attitude and activities of those working in Downing Street.’

Sir Graham famously never reveals the numbers until the threshold is reached.

If a confidence vote is called, the PM’s opponents would need more than half of the party’s MPs to back removing him – a very high bar, although anything short of an overwhelming victory could inflict terminal damage.

In theory if Mr Johnson wins be any margin he cannot be challenged again for a year.

Allies of Mr Johnson have dismissed suggestions the rebels have the numbers.

Deputy Prime Minister Dominic Raab said on Wednesday he did not believe a vote will be triggered next week as he ‘doubts’ there are even 40 letters in.

Conservative MPs are a notoriously duplicitous electorate. There was a much more organised revolt against Theresa May, and the ringleaders still struggled to keep track of how many were genuinely calling for a confidence vote.

One of the main issues for the would-be coup is the lack of an obvious successor.

Chancellor Rishi Sunak, previously the favourite, also received a fine over Partygate and has been damaged by the cost-of-living crisis.

From the current cabinet, Foreign Secretary Liz Truss and Defence Secretary Ben Wallace are also seen as being in the running.

However, there has been strong backing for Mr Johnson from his existing team.

Mr Johnson said earlier this week that quitting over the ‘miserable’ partygate scandal would be irresponsible, and denied suggestions he is an ‘habitual liar’.

He cited ‘huge pressures’ on the economy, the war in Ukraine and his ‘massive agenda which I was elected to deliver’ as his reasons for remaining in post and not seeking to ‘abandon’ ship.

In an interview with Mumsnet released on Wednesday, he was told he was considered to be a ‘habitual liar’.

The Prime Minister replied: ‘First of all, I don’t agree with the conclusion with the question asked or the premise of the question.’

Told a teacher would have lost their job if they had broken the law and asked why the same did not apply to him, Mr Johnson replied: ‘If people look at the event in question it felt to me like a work event, I was there for a very short period of time in the Cabinet Office at my desk and, you know, I was very, very surprised and taken aback to get an FPN but of course I paid it.

‘I think that on why am I still here, I’m still here because we’ve got huge pressures economically, we’ve got to get on, you know, we’ve got the biggest war in Europe for 80 years, and we’ve got a massive agenda to deliver which I was elected to deliver.

‘I’ve thought about all these questions a lot, as you can imagine, and I just cannot see how actually it’d be responsible right now – given everything that is going on simply to abandon a) the project which I embarked on but b)…’

At this point, Mr Johnson was interrupted and told some believe he has lost the trust of the people, to which the Prime Minister replied: ‘Let’s see about that and, yeah, I’m not going to deny the whole thing hasn’t been a totally miserable experience for people in Government and we’ve got to learn from it and understand the mistakes we made and we’ve got to move forward.’

However, Simon Fell, elected Conservative MP for Barrow and Furness in 2019, was the latest to be reported to have raised concerns and criticised the ‘corrosive culture and a failure of leadership’ that allowed the incidents to happen.

Bruce Willis looks casual in t-shirt and black slacks, months after he retired from acting