A three-year-old boy has died after being mowed in front of a daycare center by a hit-and-run driver while police search for the person behind the wheel.

The child was beaten on McIntyre Rd in Sunshine North, west Melbourne, around 6:30 p.m. on Thursday in front of his “distraught” mother and a number of other witnesses.

Emergency services rushed to the scene and desperately tried to treat the boy’s life-threatening injuries. He was taken to hospital where he later died.

Detectives are now desperate for the driver of a red Toyota Camry who is urging the driver to “turn himself in.” 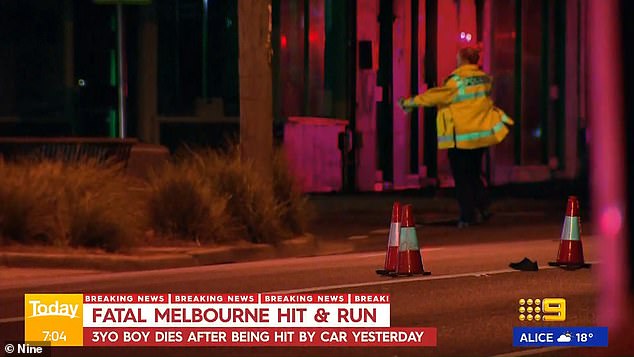 The child was beaten around 6:30pm on Thursday in front of his ‘distraught’ mother and a number of other witnesses on McIntyre Rd in Sunshine North, west Melbourne (scene pictured)

Investigators suspect at this stage that the boy “ran out onto the road” and that the driver did not stop because they “were panicking.”

“Clashes like this sometimes bring out the worst and the best in people,” Detective Acting Sergeant Leigh Miller told 9News.

‘In this case you have the driver of a car for unknown reasons, who has failed to stop and help this child.

“I can only hope they didn’t know it was a child, but if they did, what else can we say about them?” 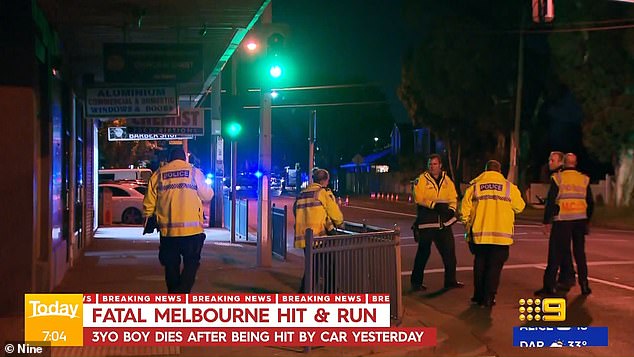 Officers from Victoria’s Major Collision Unit searched the crime scene overnight, cordoned off the busy road and knocked on the doors of nearby homes and businesses to request CCTV footage of the incident.

A child’s shoe lay in the middle of the road as police investigated the scene.

“Detectives are calling on anyone with information and/or the driver to come forward and contact the police,” the police said.

“Anyone who witnessed the incident, has dashcam footage or other information that could assist the police in their investigation is asked to contact Crime Stoppers.”