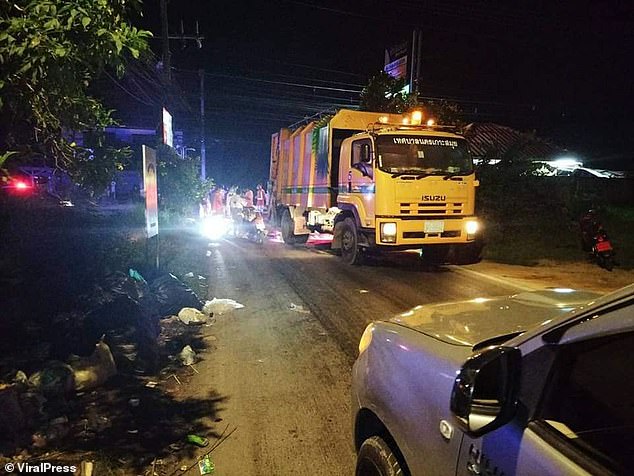 British tourist, 36, is killed and another seriously injured after their scooter crashes into a garbage truck on the Thai island

By Rachael Bunyan For Mailonline

A British tourist was killed and another seriously injured after their scooter collided with the back of a garbage truck on a Thai island.

A 36-year-old man and his 30-year-old friend allegedly drank at a local bar on the island of Koh Samui before attempting to drive back to their hotel in the early hours of Thursday morning.

The two men allegedly plowed the white Honda scooter into the back of the yellow garbage truck as they tried to overtake the vehicle around 1 a.m. local time.

Police and ambulance arrived at the scene and performed CPR on the 36-year-old man for about 10 minutes. But the Briton was pronounced dead after a broken neck and serious head injuries.

The second man, who was driving the scooter, was taken to Koh Samui Hospital for treatment.

A British tourist was killed and another seriously injured after their scooter collided with the back of a garbage truck on a Thai island. Pictured: the scene

Officers said several beer cans were found in the storage compartment under the scooter’s seat and they will question the survivor once he is stable.

The garbage truck driver, 42, said he called 911 after hearing the two men crash into the back of the commercial waste vehicle.

He said: ‘At the time of the incident, my crew and I were going out to collect rubbish on Chaweng beach and we were on our way to the waste disposal facility. Suddenly there was a loud noise at the rear wheel while making a turn.

“So we parked and went down to look. I saw that a motorcycle had crashed and found two injured tourists. I immediately called the police and told them what had happened. I’m very sorry.’ 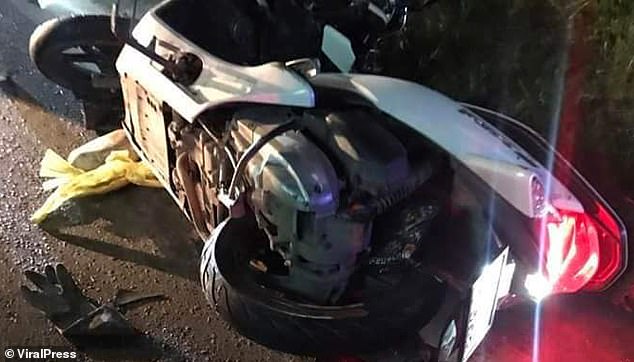 The two men are believed to have plowed the white Honda scooter (pictured after the crash) into the rear of the bright yellow garbage truck as they attempted to overtake the vehicle as they rounded a turn on a dark narrow road around 1:00 AM local time .

Officers said they found cans and bottles of alcoholic beverages under the motorcycle’s seat. Police suspect the tourist may have been drinking in nearby bars before returning to his accommodation.

Lieutenant Colonel Chatchavil Nakmousik said: “The initial investigation showed that the two vehicles were traveling in the same direction. The garbage truck was in front.

The driver tried to overtake the garbage truck, but was unable to, leading to a collision. We will summon the truck driver and also the injured tourist for questioning. We also check through the cameras.’

Thailand has one of the world’s worst road safety records, with dozens of tourists and expats killed on the roads every year.

In June, Canadian Christian missionary Marine Scott, 49, was killed instantly after being hit by a pickup truck while cycling in Kanchanaburi.

MailOnline has contacted the UK Foreign Office for comment.