Can YOU Answer Elon Musk’s Favorite Interview Question? TikTok users are caught off guard by a tricky MULTIPLE-answer math conundrum that billionaire Tesla founder uses to grill up candidates

Elon Musk’s go-to interview question — a tricky math conundrum with multiple answers — has baffled TikTok after it was shared by a math influencer. Tanya Zakowich, known on the platform as @pinkpencilmath, explained in her now viral video that the billionaire would ask candidates to solve this brain teaser during interviews at SpaceX before popping the question to viewers. 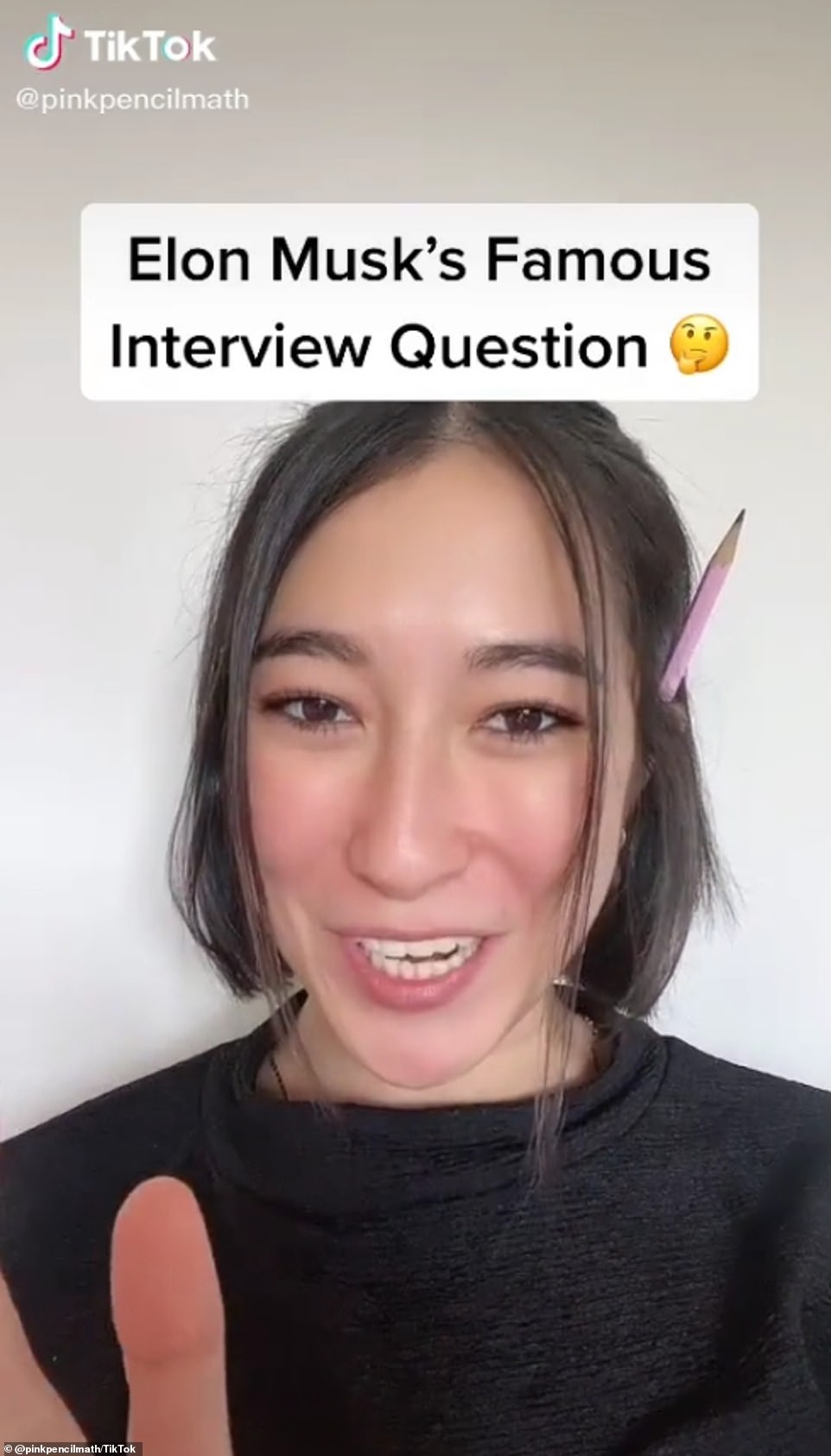 Many people didn’t know what to make of the riddle and assumed it was a trick question when they shared their guesses. “Right where you started on the Earth’s surface,” said one user.

While someone else joked, “SpaceX at Tesla, there you are.”

‘Bermuda triangle! Things disappear there, so I think all sense of direction was lost,” concluded another.

A TikTok user shared a more philosophical answer, writing: ‘You’ve landed in’ [a] better place than before because you took action. You didn’t stay where you were.’ 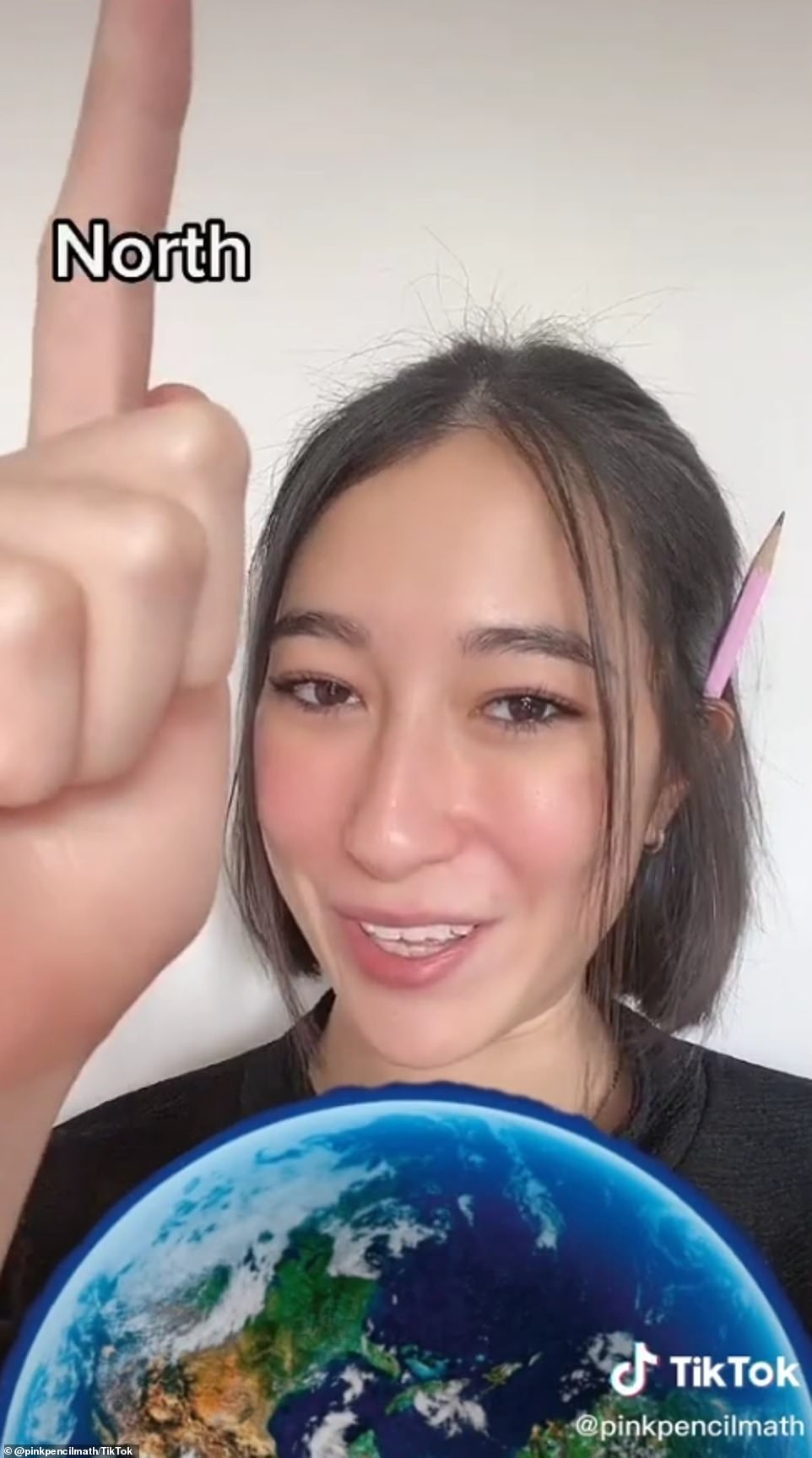 Zakowich never shared the answer to the conundrum, but it’s widely known after it was featured in Ashlee Vance’s 2015 authorized biography “Elon Musk: Tesla, SpaceX, and the Quest for a Fantastic Future.” The SpaceX founder and CEO personally interviewed nearly all of the space manufacturer’s first 1,000 employees in its early years, including janitors, via CNBC, according to the book. 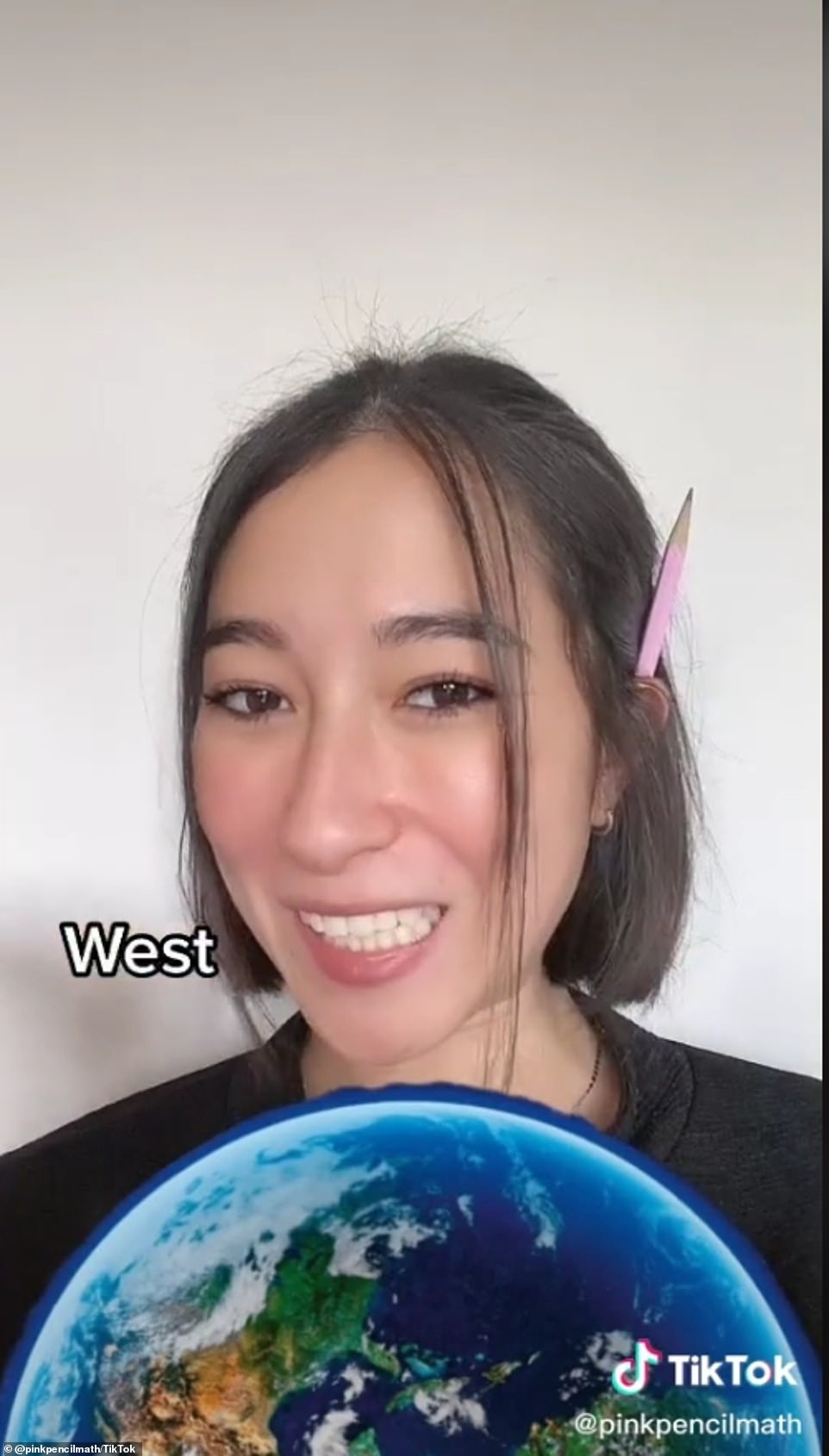 Musk, now 50, continued to interview engineers as the company grew, using his favorite riddle to see how the minds of potential employees worked. There are multiple answers to the riddle, but the first and most common correct answer is the North Pole. The reasoning was explained by Popular Mechanics when the brain teaser was named as the publication’s “Riddle of the Week” in 2017. 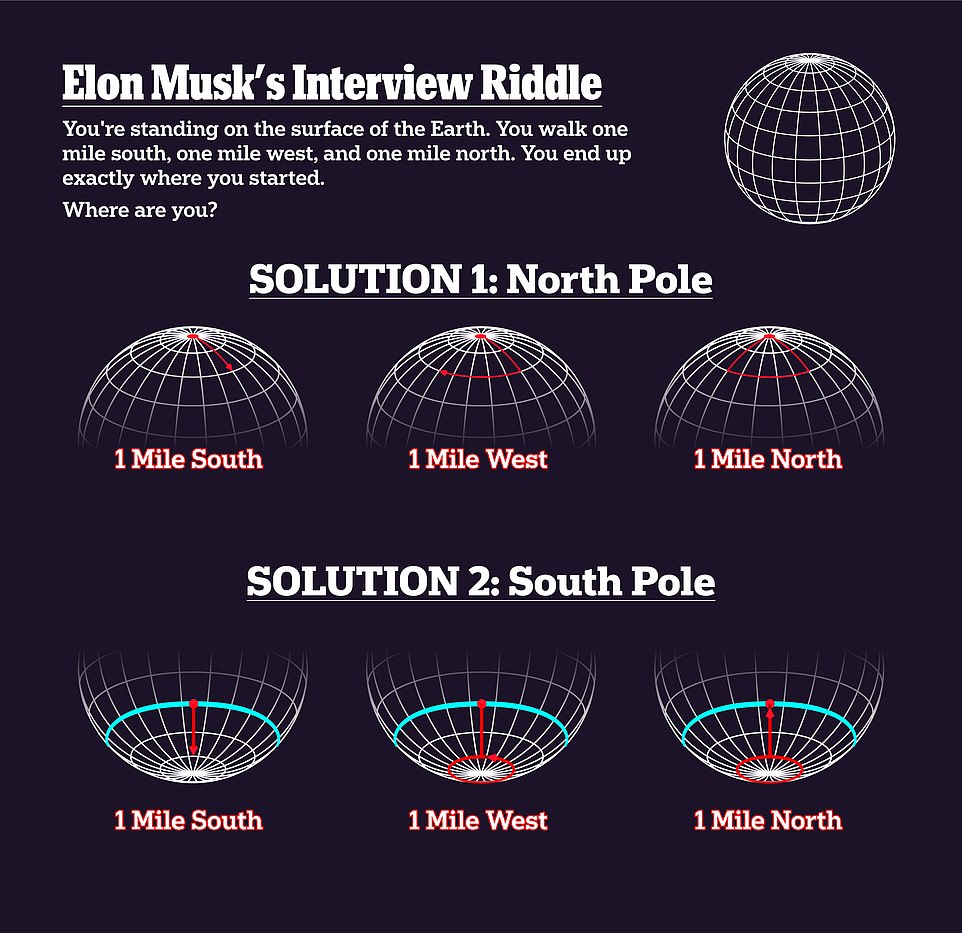 “If you’re directly at the North Pole and you walk a mile south, then a mile west, then a mile north, you come back to the North Pole,” the magazine said. Candidates who have named the North Pole won’t get much time to celebrate solving the riddle, though, as Musk will reportedly follow up and ask, “Where else could it be?” 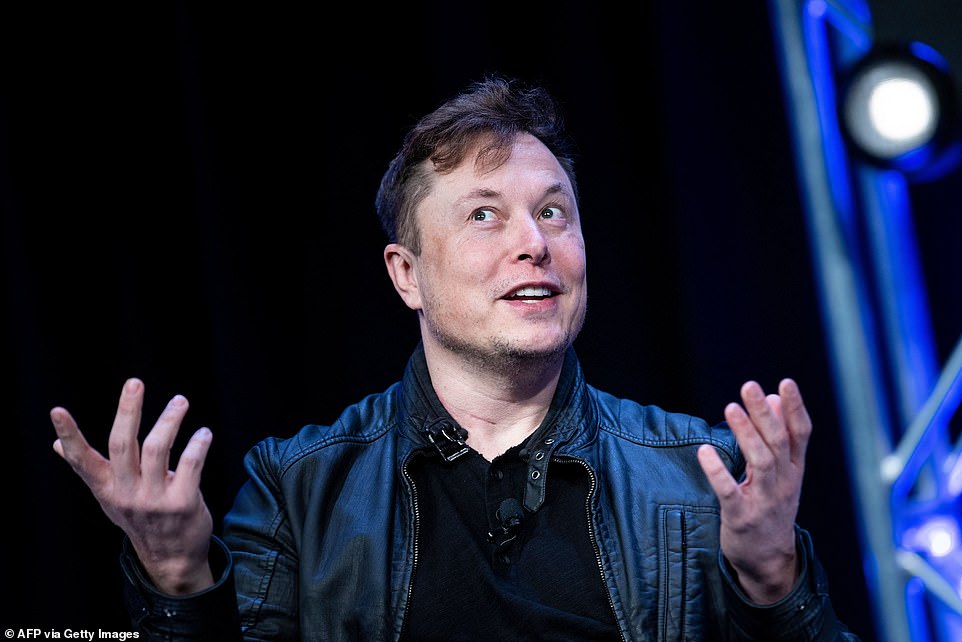 The second answer is the South Pole, but according to Vance’s biography, fewer engineers give this answer. “Imagine a circle one mile in circumference with the South Pole in the center. If you started a mile north of this circle, you’d travel a mile south, a mile west all the way around the circle, and then a mile north back to your starting point,” Popular Mechanics explained.

Most of the people who gave the correct answer on TikTok said the North Pole, but there were also those who commented that the South Pole is also correct.

“There are a few solutions,” commented one person. “One is the North Pole, but also somewhere a mile north of a place close to the South Pole.” 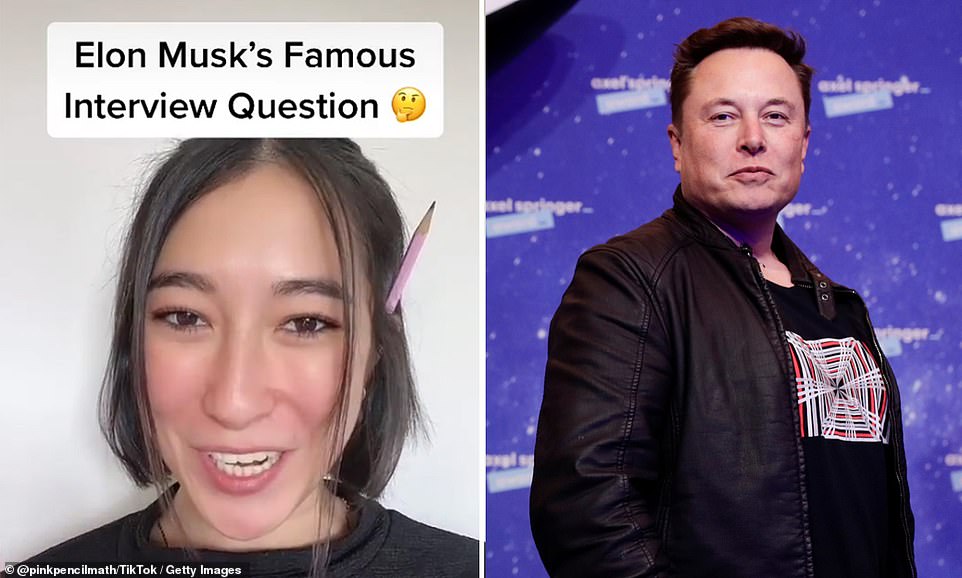 However, the TikTok users who came up with more creative solutions will be happy to know that Musk wouldn’t disqualify them for getting the answer wrong. Vance explained in his biography that the Tesla CEO cares more about the person’s approach to solving problems than the answer itself.