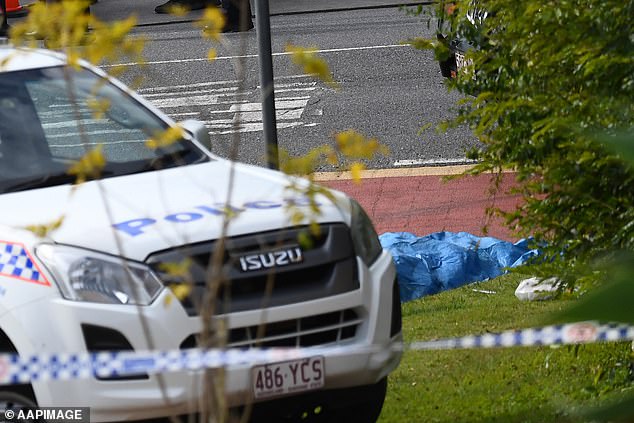 A gym goer has described the gory, chaotic scene of a relentless cyclist being stabbed as witnesses fought desperately to save a young man’s life.

Comancheros employee Levi Johnston, 23, was stabbed to death around 1pm Monday in an ambush outside a Goodlife gym in Brisbane’s Carindale.

His car was wedged in and rammed as he tried to exit the driveway before five assailants smashed his window with a crowbar and he fled.

Mr. Johnston didn’t get very far when one of the men caught up with him and stabbed him in a frenzy, leaving him bleeding on the road.

Champion track cyclist Peter Makras was among the first on the scene and helped to resuscitate the mortally injured man as he lay in a pool of blood.

Comancheros employee Levi Johnston, 23, (body covered with a tarpaulin on the right) was stabbed to death in an ambush outside a Goodlife gym in Brisbane’s Carindale, around 1pm on Monday

The electrician said he thought Johnston had been hit by a car until he saw the “deep cuts near his chest” from the killer’s knife.

“The man was half on the road and half on the footpath with people trying to help him,” he told the Daily Mail Australia.

Makras and several others tried to stop the bleeding, keep the wounds closed, and resuscitate Mr. Johnston with a defibrillator when they lost his heartbeat.

The shocked Good Samaritan said it was chaos with countless people fighting to save the injured man’s life.

“There was blood everywhere, a few times I had to move the towel and in the awkward position I was in I was pretty much over him — up close and personal,” he said.

“I just did what I could at the time. He’d already lost a lot of blood.’

Mr Makras, who is an electrician trained to use a defibrillator, shocked Mr Johnston several times while trying to get a heartbeat until paramedics arrived. 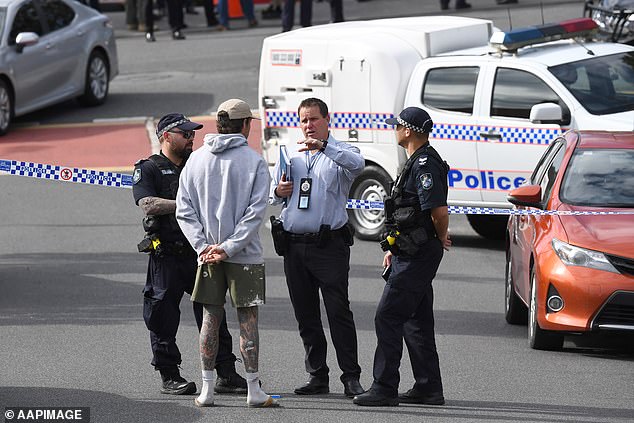 He watched as the injured cyclist was loaded into an ambulance and drove off the scene, not knowing whether he would live or die.

Four alleged gangsters are on the run and a fifth was tracked down and arrested near the crime scene on Monday.

Mr Johnston, who is known to the Comancheros but not a patched member, was driving a Mercedes when a black Audi A3 hatchback pulled up behind him.

Police said CCTV footage showed him then being rammed in the front by a white Nissan Patrol and five men jumping from two cars and breaking his windows with a crowbar.

The driver managed to escape from the car through the passenger door, but was chased by the group. When they caught up with him, one of the pursuers stabbed him several times and left him for dead.

Mr Johnston was previously one of two men stabbed a year ago on the Gold Coast during a fight involving biker gang employees. It is not known whether the two stabbings are related. 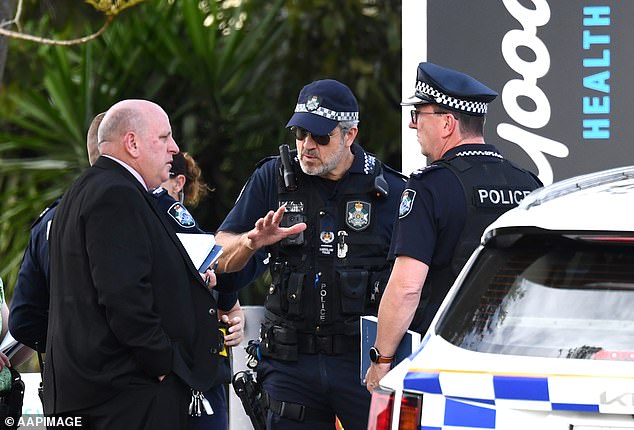 The man was stabbed multiple times outside a Goodlife gym on the corner of Creek and Pine Mountain roads (pictured) in Carindale at 1 p.m.

Queensland Police Superintendent Andrew Massingham said he had seen some CCTV footage of the incident and ‘it’s horrific’.

“It’s a disturbing act, it’s a brutal act … it’s cowardice,” he said, adding that the stabbing was over in “less than five seconds.”

The four men who had been in the Nissan ran away, while the man with the Audi could not start his car and fled on foot.

Chief Inspector Massingham said the attackers were not wearing any disguises, based on the “graphic” CCTV footage he saw.

A search in the area for the man who fled on foot led to the discovery of two backpacks, which are being forensically examined.

Police said both backpacks came from the Audi.

It’s possible the men in the Nissan jumped back to pick up the man who fled on foot, Chief Inspector Massingham said before he was arrested. 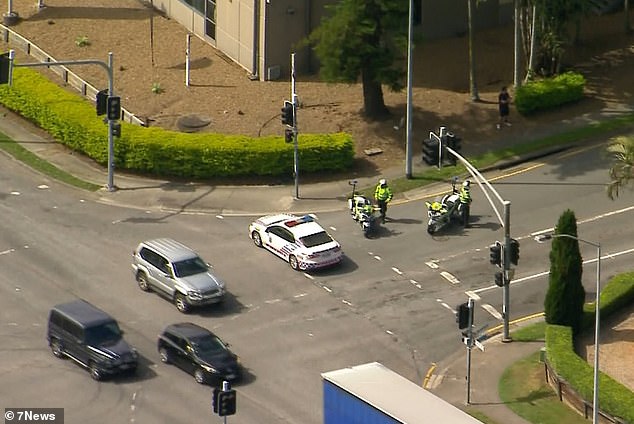 Chief Inspector Massingham told reporters that off-duty medical personnel tried to help the victim at the scene but were unable to save him.

Although the motivation for the murder is unknown, the police are investigating whether the stabbing is related to activities of motorcycle gangs.

A bystander said up to 50 people were on the scene and the gym was being evacuated.

Another said they saw police chasing a man on a hill, away from the gym.

“Then, across the street from the gym, paramedics were working on someone on the floor who didn’t look like they were in great shape.

“There was a huge crowd of people there and everyone had their phone filming.

‘Lots of police and ambulance personnel on the scene and also a helicopter that flies.’ 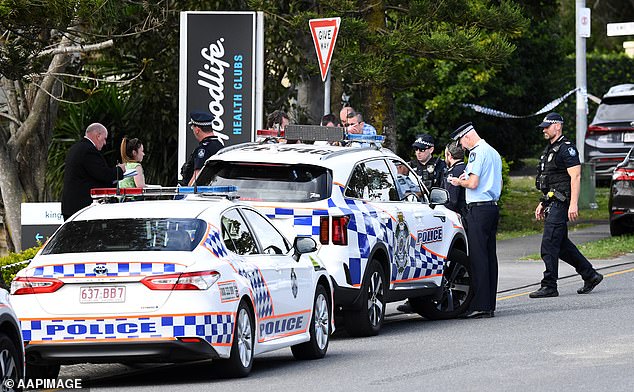 Officers at the scene closed the intersection of Pine Mountain and Creek roads in Carindale.

Chief Inspector Massingham said a post-mortem examination of the victim will be conducted early on Tuesday.

He said significant resources have been allocated to the case and hopes for a “quick resolution.”

Gang war in Sydney: Rapper Ay Huncho claims Alameddine’s crime network was made up by police