Caught in a terrifying midnight image, the horizon ablaze near Kiev…terrible but enchanting 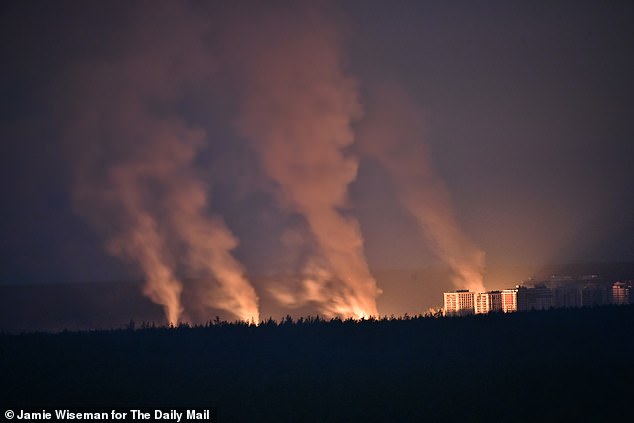 This is what the end of a civilized world looks like – terrible and beautiful at the same time. It is nearly midnight and below us the town of Irpin is shelled by artillery.

Night has turned to day and orange flames leap high and hypnotically, so that the white concrete of the nearest tower blocks gives off an afternoon glow.

Each new hit blooms silently, before the deep thump of impact reaches our vantage point many seconds later.

We are on the 23rd floor of a residential tower on the outskirts of the Kiev suburb of Sviatoshyn. Here we are separated from Irpin by a few kilometers of birch forest.

But from this height, we have an extraordinary panorama that includes not only the battered satellite city, but the entire critical front line north and west of Kiev. It is here that the Russian armored and airborne troops have gathered in anticipation of a war-ending attack on the capital.

We are the guests of Andrei Shirimira, a classical violinist who trained at the Kiev Conservatory and played in one of his orchestras. Now he is the only resident on the top floor.

This is what the end of a civilized world looks like – terrible and beautiful at the same time. It is almost midnight and below us the city of Irpin is being shelled by artillery

Except, with the exception of his terrified cat Masya, Andrei’s plight reminds me of Matt Damon’s astronaut in the movie The Martian: unexpectedly alone in a dystopian, hostile universe. The difference is that Andrei, 51, chose to stay.

We had briefly met him last week when he described to us how sometimes his whole horizon seemed to be on fire – and he invited us to see for ourselves. We took up his offer.

He hadn’t exaggerated. What follows is a surreal and unsettling night, with our host playing some of the most beautiful music ever composed, even as the sounds of the Battle of Kiev rattle at his windows.

We arrive as the light is fading. From the west there is a sound like rolling thunder. It’s not thunder, of course. Three different smoke columns rise from Irpin. Only a few hours have passed since the death there of American filmmaker Brent Renaud. 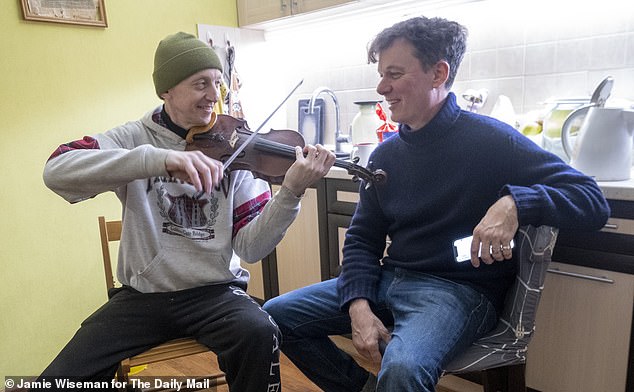 In the southwest, the horizon is lost in a fog, behind which a warehouse has been smoldering for days. In the north, under a huge cloud of smoke, oil flames can be seen springing from the Hostomel airport, which was taken by Russian paratroopers at the start of the war and is still bitterly fought over.

“I used to live in the center of Kiev,” says Andrei, whose sad demeanor belies a keen sense of humor. “I moved here after my divorce. It was beautiful, green, quiet. Close to the lakes. It has the freshest air in Kiev.’

We both laugh now at the absurdity of those attractions.

Dusk creeps over the forest. The distant warehouse now glows like the dying embers of a fire. The Hostomel fire is a bright, concentrated, orange ‘O’, like the open mouth of an oven. Andrei pulls down the blinds. He doesn’t want to attract snipers after unexplained exchanges of small arms in the woods the previous night. This war makes no distinction between soldiers and artists.

Andrei has already lost a violinist friend, Alexandra, who was killed at a Ukrainian checkpoint when the car she was a passenger in didn’t slow down enough. 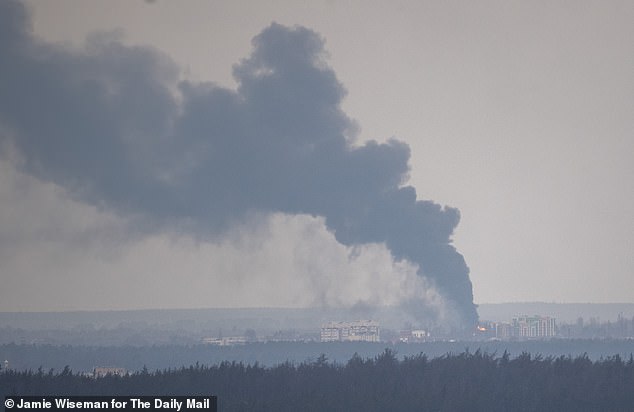 In the north, a light shoots into the sky – before breaking into a thousand glittering fragments. Probably an air defense missile

Now comes the news of the death of a 17-year-old musician from Andrei’s hometown of Chernihiv, under siege by the Russians in northern Kiev. His parents, a retired engineer and doctor, are trapped there. A huge explosion shakes the flat. As usual, Masya hides under Andrei’s bed.

“She’s smart and charming, but very afraid of the noise,” he says. “She doesn’t understand what’s going on in our country.”

He takes her outside to meet us. Masya looks alarmed. When he puts her down, she jumps back under the bed. Andrei is more blasé. “I’ve decided not to pay attention,” he says after more banging.

“In the beginning I went to the basement. But after three days I got tired of it. It takes too long. I’m 23 floors away.’ Tonight he is the perfect host. He made pea soup for us.

When the artillery is silent, it is almost homely – just the ticking of the kitchen clock.

Our photographer Jamie shows Andrei a video of his children – Sophie, Luca and Bridget – playing a piece by Mozart. Now it’s time for Andrei to pick up his own violin. It was given to him 30 years ago by Fedor, a former Red Army soldier, who had looted it in Germany in 1945. 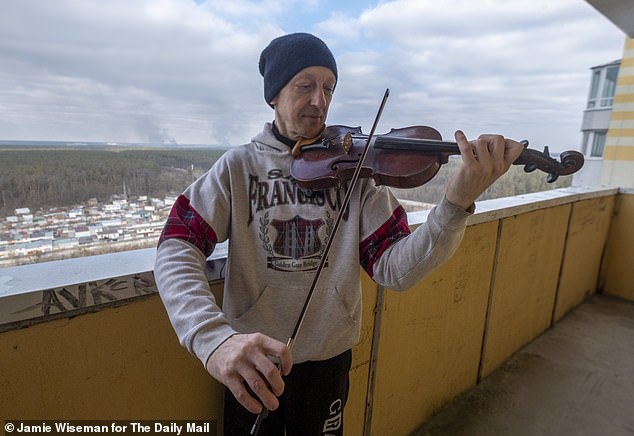 Once a violinist of the Kiev Philharmonic Orchestra, he became vegetable peeler salesman Mr Shirimira, pictured in the morning light on his balcony overlooking the forests surrounding Northern Kiev and its satellite city of Irpin

As Andrei tunes in, war is knocking on the windows again.

The soiree begins with a piece by Paganini, then Csardas by Monti, an excerpt from the soundtrack of a Soviet television adaptation by Sherlock Holmes, before ending with a beautiful and slightly sinister tango. We applaud him with emotion.

But the war is not intimidated by such beauty. It demands our full attention. And so we go to the balcony.

In the north, a light shoots into the sky – before breaking into a thousand glittering fragments. Probably an air defense missile. What did it hit? A glow on the western horizon grows and swells like the rising sun and then is gone. Seconds later, the boooooom arrives.

The middle horizon is bathed in flames. Then, a flash and the whole skyline lights up. Then a whole series of lightning flashes. It’s terrifying and exciting, like some primeval beast running wild in the darkness.

But one is safe here. Such height gives a false sense of security.

At 10:30 p.m. towards Hostomel, the low cloud is illuminated by several explosions in the sky. Not to be outdone, the southern sector is lit up like day. A few seconds later, disaster comes.

The exchanges go on and on. Finally we recover to bed. I bivouac on the floor of Andrei’s kitchen. 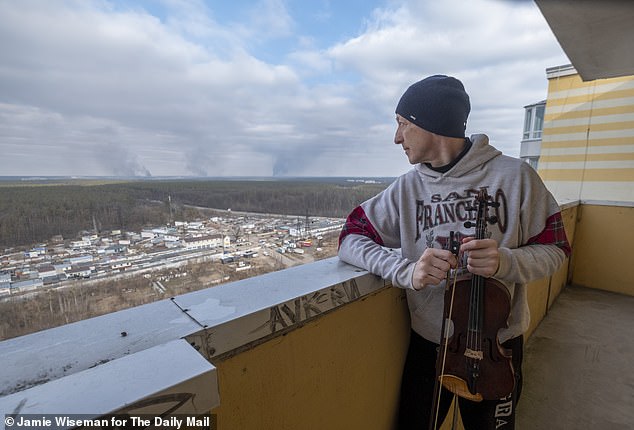 The Antonov aircraft factory, not far from Mr Shirimira’s flat, has also been targeted. In the photo: Mr. Shirimira on the balcony of his flat

Sleeping is not easy and at 5.15 am I am awakened by a huge thud. The unpleasantness resumes in earnest and for the first hour after sunrise the low clouds are indistinguishable from the battle smoke.

Some of those previous explosions have taken place within the city limits. News comes that a block of flats in the northern suburb of Obolon has been hit by a Russian airstrike. One person is dead, dozens have to be evacuated. The Antonov aircraft factory, not far from Andrei’s flat, has also been targeted.

After breakfast Andrei plays a little Bach for us on the balcony. He now competes against a drumbeat barrage to the northwest. Hostomel’s fire, so bright last night, is hidden by a huge cloud of smoke. Poor Irpin is also obscured by the fog of new hits.

“Those Russians, you stupid idiots,” Andrei says, pointing his horizon. “I couldn’t believe this is possible in the 21st century. Putin is a coward and this war will be an inevitable defeat for him. But it’s terrible. Those poor people, so scared, so exhausted. I see the rows of evacuation buses under my window every day.’

Why doesn’t he join them?

“My friends ask me why I stay here,” he admits. ‘I do not know. I just have the feeling it’s going to be okay.’

We hope so too, when we say goodbye to this eccentric violinist, his shell-shocked cat and their grandstand view of the end of their civilized world.

He is American, he oversees Papa John’s in Russia and he stays