The Indianapolis Children’s Museum, also known as the “largest children’s museum in the world,” is being recalled for being racially insensitive as it serves “Juneteenth Watermelon Salad” on their menu ahead of the National Day.

Visitors were outraged when they saw the $10 watermelon salad for Juneteenth — which many labeled “racially insensitive.”

Jackson Moon, aka Jackson Adams, shared a photo of the salad on Twitter with the caption: “Racially insensitive salads. NO ONE BLACK HAS ASKED THIS!’

“This is appalling and racist,” another person tweeted.

Another said, “This is what happens when a holiday is made federal.”

The racist trope of black people loving watermelon dates back to the emancipation period after the Civil War, when southern whites tried to give the popular fruit negative connotations because it was grown and sold by free black people.

The trope exploded in American culture and sadly continues to this day.

The Indianapolis Children’s Museum has since apologized and said it is pulling the product.

“As a museum, we apologize and recognize the negative impact stereotypes have on communities of color. The salad has been removed from the menu,” said a spokesman.

They explained that they had planned a Juneteenth menu “to raise awareness of the significance of the holiday and to commemorate their own family traditions.” 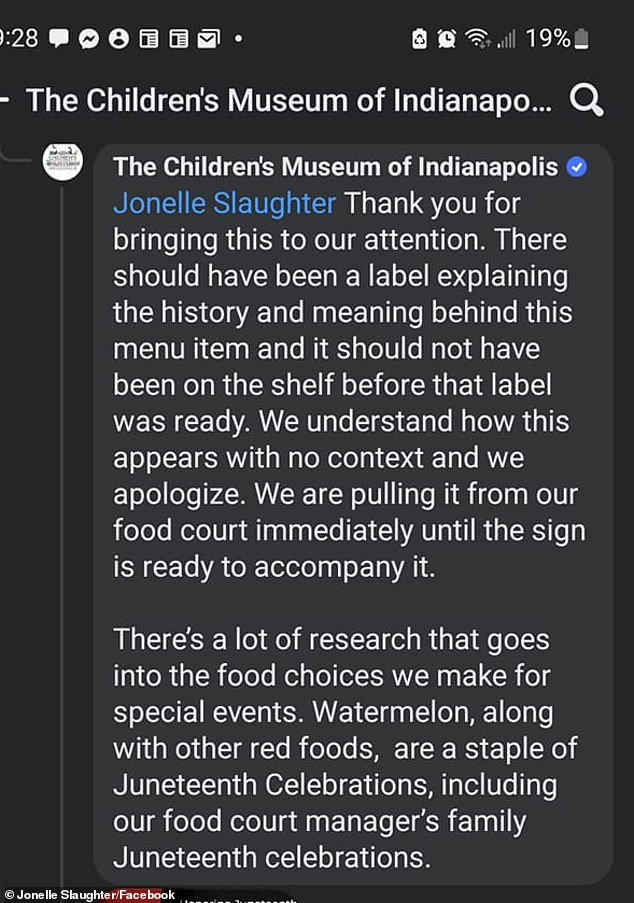 On Friday, the children’s museum responded to Jonelle Slaughter who explained the process involved in menu selection and the research behind it. They also apologized to her, but did say that the salad will be put back on the food court shelves once it is properly labeled with the meaning of the day 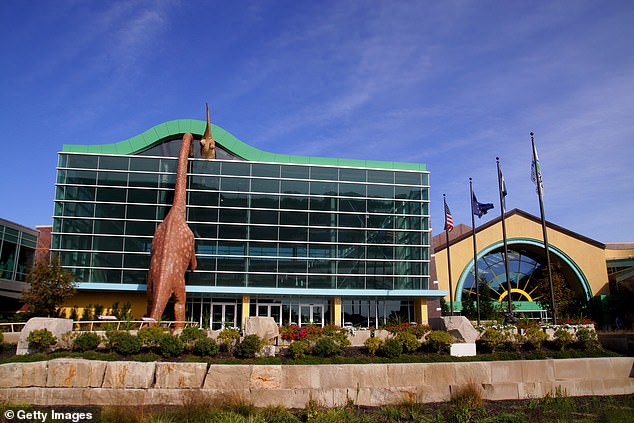 Located in northwest Indianapolis and spanning 500,000 square feet, and a major tourist attraction with more than 1.3 million visitors a year, the massive museum defended their decision for the menu offerings and later apologized.

“Red food has historically been served by some to remember the blood shed on the way to freedom,” the spokesman said.

The $10 salad listed in the museum cafeteria features a medley of fresh lettuce, tomatoes, cucumbers, sprinkled feta cheese, and chunks of watermelon.

It is unclear whether the food service partner is a black company.

June 19, also known as Emancipation Day, commemorates the end of slavery for all Americans. It originated in 1865, when the last enslaved people in the US, in the rebel state of Texas, were informed about the Emancipation Proclamation.

She continued: “As the holiday is now recognized and companies are quickly jumping on board with offensive ice creams and decorations, we must learn to protect our history and culture before it becomes twisted and unrecognizable.” 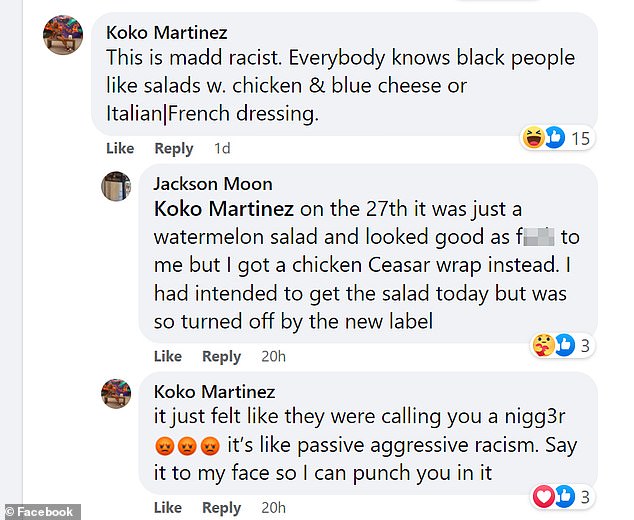 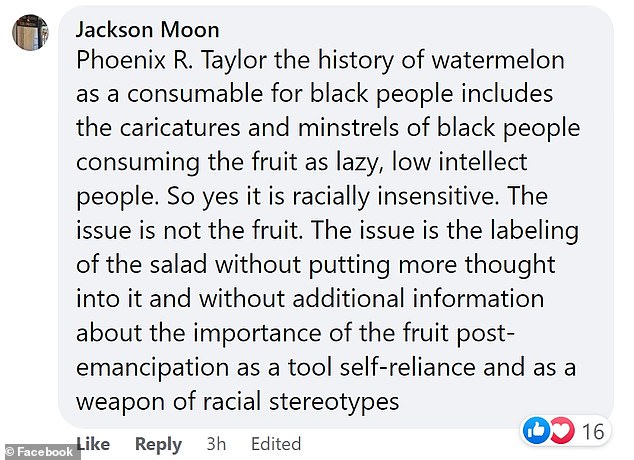 On Friday, Moon posted that “The museum removed my comment suggesting they remove the salad, but our people wouldn’t budge and in the end this was their response.”

Moon referenced the response given to Jonelle Slaughter, another museum visitor who also posted a photo of the salad in a Facebook comment below a post from the museum promoting the Juneteenth Jamboree, FOX59 News.d reports.

“So you’ve all decided ‘let’s celebrate by perpetuating offensive stereotypes,'” Slaughter wrote. “You really thought this was a good idea?”

On Friday, the museum released an explanation of Jonelle Slaughter’s response.

“Jonelle Slaughter Thank you for bringing this to our attention. There should have been a label with the history and meaning behind this menu item and it shouldn’t have been on the shelf until that label was ready. We understand how this seems without context and we apologize. We get it straight from our food court until the plate is ready to accompany it.’

“A lot of research is being done into the food choices we make for special events. Watermelon, along with other red foods, is a staple of Juneteenth Celebrations, including our food court family manager’s Juneteenth celebrations.”

Located in northwest Indianapolis and spanning 500,000 square feet, the massive museum is a major tourist attraction with more than 1.3 million visitors a year. 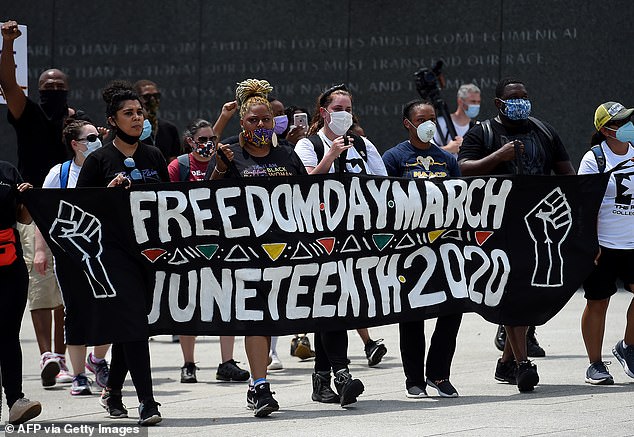