CHRISTOPHER STEVENS Reviews The Lord of the Rings: The Rings Of Power

The Lord Of The Rings: The Rings Of Power

Turkey is not the word. No turkey, however bloated and stupid, could ever be big enough to convey the mesmerizing horror of Amazon’s multi-billion dollar Tolkien epic.

This is a disastrous dragon – plucked, spatchcocked, tankerloaded with Paxo filled its foundation, roasted and served with soggy sprouts.

The Lord Of The Rings: The Rings Of Power (Amazon Prime) is so mind-bogglingly bad, it’s hilarious. Everything is rated badly to the extreme.

The cliché-laden script, the appalling acting, the gritty pace, the sheer inconsistency and confusion as it swings between styles – where do we start? 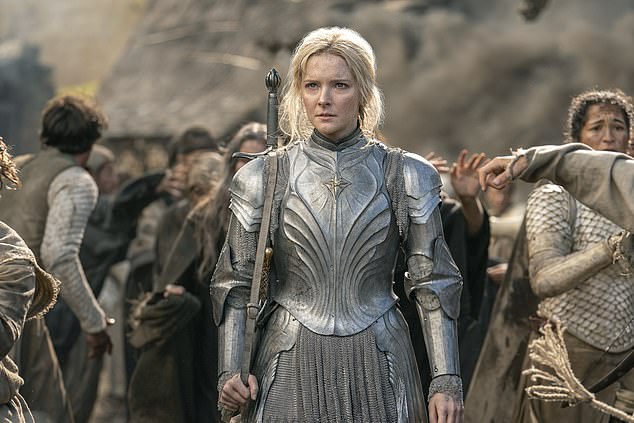 Review: The Lord Of The Rings: The Rings Of Power is so mind-bogglingly bad, it’s hilarious. Everything is bad judged to the extreme (Galadriel played by Morfydd Clark)

Let’s start with the budget: a billion dollars. Just let that sink in. A thousand million dollars, about £860,000,000, such a colossal investment, even for Amazon, that industry rumor says the brand is risking its entire future as a film production company.

If this show fails, insiders say, executives could be forced to shut down Amazon Studios.

The book rights alone cost $250 million. And what did Amazon get for that? This is not a remake of Lord Of The Rings or The Hobbit. This is a prequel, based on the appendices – the piles of footnotes that JRR Tolkien dumped at the end of his Rings trilogy, detailing millennia of swollen historical fantasy. That’s right… the illegible bits. 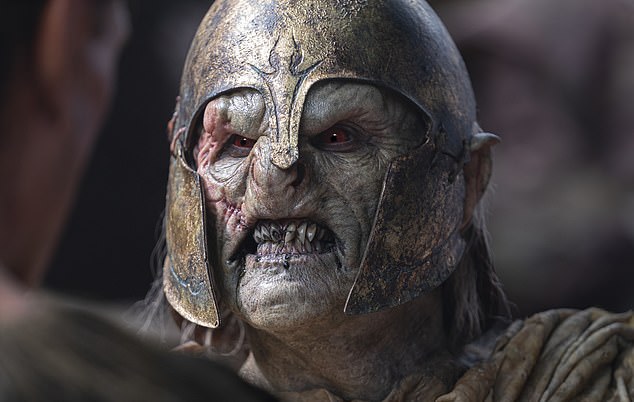 Panned: The cliché-laden script, the appalling acting, the gritty pace, the sheer inconsistency and confusion as it swings between styles – where do we start? (picture an Orc)

Whoever thought that was a wise buy must have been knocked out on miruvor, the elfin potion.

There is no doubt that we can see the budget. It casts a throbbing glow across the screen like a chest full of gold. Ultra-high-definition computer graphics paint ivory cities into mountain passes and turn gigantic monsters into palaces of dark magic.

But beautiful images are meaningless if no one knows who the audience should be. And it’s impossible to guess whether The Rings Of Power is aimed at kids, hardcore fans, or general viewers – because it fails them all. 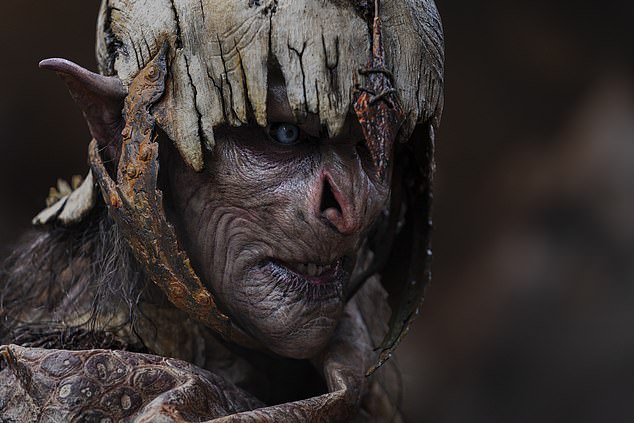 Big money, big problems! A thousand million dollars, about £860,000,000, such a colossal investment, even for Amazon, that industry rumor says the brand is risking its entire future as a film production company. 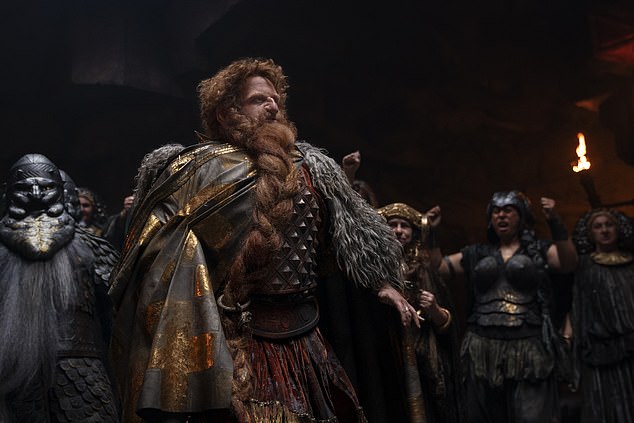 One battle scene features Elf Princess Galadriel in acrobatic action against an evil troll, who emerges from the stage as an opponent in a Dungeons & Dragons board game.

Galadriel (Morfydd Clark) guesses and swings her enchanted sword before sending the giant devil with a bloodless blow. It is very stylized, like a Japanese manga cartoon.

An episode later, the healer Bronwyn (Nazanin Boniadi) and her son fight an orc, and this time the violence is as brutal as anything in Game Of Thrones. 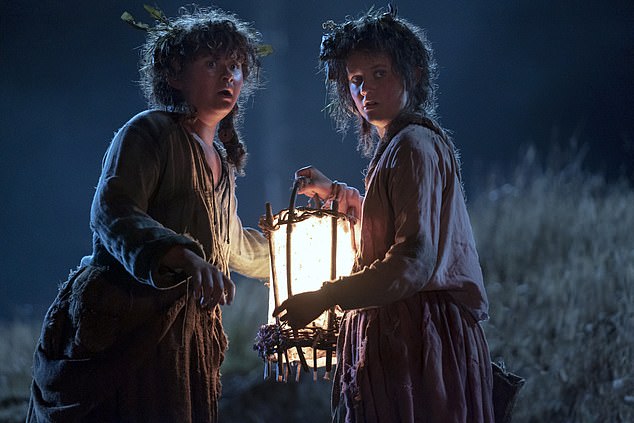 How much! The book rights alone cost $250 million. This is a prequel, based on the appendices – the piles of footnotes dumped by JRR Tolkien (photo Poppy Proudfellow played by Megan Richards and Elanor ‘Nori’ Brandyfoot by Markella Kavenagh)

They stab in it, spear it in, poke it through, hang it up and finally saw through its neck with a knife – before Bronwyn, drenched in blood, shows the head like a trophy. Small children and nervous persons should not watch.

Then the story flies back to the Harfoots, prehistoric hobbits who wear acorn slings and dress in rags, as if they escaped from Worzel Gummidge’s set.

Led by Lenny Henry as Sadoc, the Harfoots talk in a jumble of Jamaican, Irish and Zummerset accents. They are sweet and funny, in a slapstick way. Poppy Proudfellow (Megan Richards) goes on an expedition to forage for blackberries and falls flat in a puddle.

When she lifts her muddy face to the camera, like Oliver Hardy, she sighs, “Enchanting.”

Harfoot-land is cute… until old Mr. Brandyfoot slips and breaks his leg, with a crack that would make the cast of Casualty wince. 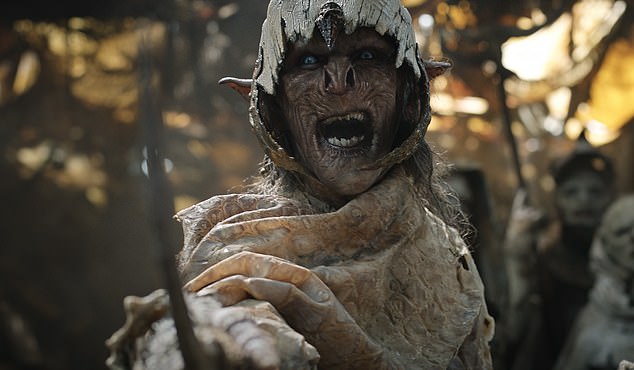 Opinion: whoever thought that was a wise buy must have been knocked out on miruvor, the elfin potion

One disconnected style follows wildly after another. A static scene in which elves travel by ship is conceived as a PreRaphaelite painting—each actor still in silver armor, swords clutched to their chests, long flowing hair, eyes staring at the horizon in pious awe. Inspired by a flock of birds, they raise their voices in a heavenly chorus.

There are many of these quasi-religious images. The first episode opens with a cod bible: “There was a time when the world was so young, there was no sunrise, but even then there was light.”

Popular culture makes up such a blether to replace the real religion. It’s Scientology for the superhero movie era.

“Year gave way to year, century gave way to century,” the narrator continues, and this reviewer has already given way to laughter. Soon, each new clunker caused such a moan that I had to keep pausing to find my composure.

“It is said that the wine of victory is sweetest to those in whose bitter trials it is fermented,” the elf Elrond (Robert Aramayo) tells Galadriel. And I’m gone again. 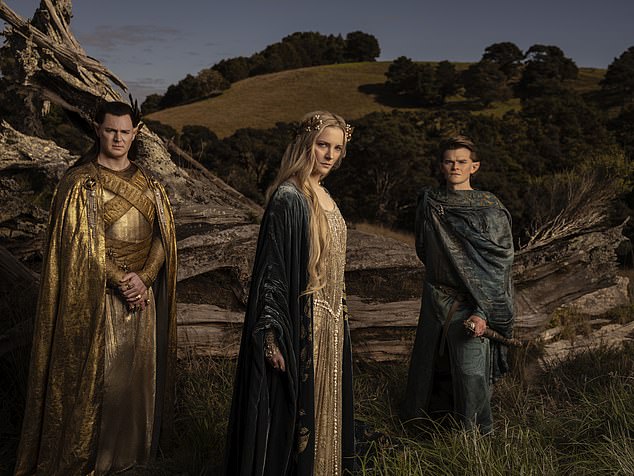 Graphics: There is no doubt that we can see the budget. It casts a throbbing glow across the screen like a chest full of gold. Ultra-high definition computer graphics paint ivory towns into mountain passes and conjure gigantic monsters into palaces of dark magic [pictured L-R) Gil-galad (Benjamin Walker), Galadriel and Elrond (Robert Aramayo)]

‘If only a whisper of a rumor of the threat you perceive turns out to be true…’ he continues, until I cry with laughter.

Bronwyn and her friend Arondir the Elf have some great exchanges: “I have to follow the passageway,” he tells her, pointing to an underground cavern.

“You don’t know what’s down there!” she is crying.

“That,” he replies ominously, “is the reason I must go.”

Without a shred of irony, Galadriel declares to her elf platoon, “The order is given! We march at first light!’

She couldn’t have seen the wonderful sketch of Steve Coogan and Rob Brydon in The Trip, where they spend a car journey and wonder why warriors in terrible historical dramas always “depart at first light” (“They never leave at 9:30 am.” )

Bronwyn hasn’t seen it either. She urges villagers to flee: “If there’s any of you here who wants to live, we’ll go to the fairy tower at first light.”

Even if there is no dialogue, some of the acting is terrible. Trapped in a snowstorm, Galadriel’s elf patrol makes its way across the screen with arms outstretched like a troop of mimes.

At least they don’t talk. Most elf scenes are rigid, as two robed characters take turns dumping piles of exposition over each other’s heads.

“An alliance with the dwarves would be the diplomatic achievement of the time,” Celebrimbor (Charles Edwards of Downton Abbey) told Elrond.

If the cast list seems a bit obscure, that’s intentional. Aside from Sir Lenny, the only known star is Peter Mullan, who plays the king of the dwarves.

Hiring an experienced and subtle actor, even if he has a huge prosthetic nose and is filmed to look like five feet, may seem like a smart decision.

It’s not. Mullan’s talent just shows how sad everything and everyone is. The effect is like putting Richard Burton in an am-dram pantomime.

Burton, of course, was very expensive. Cleopatra, in which he starred with future wife Elizabeth Taylor, cost $31 million… the most expensive film ever, in 1963.

Think about it – only $31 million! You can hardly buy a pair of Lenny Henry’s furry fake feet for that.

Failed: But beautiful images are meaningless if no one knows who the audience should be. And it’s impossible to guess whether The Rings Of Power is intended for kids, for hardcore fans or for general viewers – because it all fails