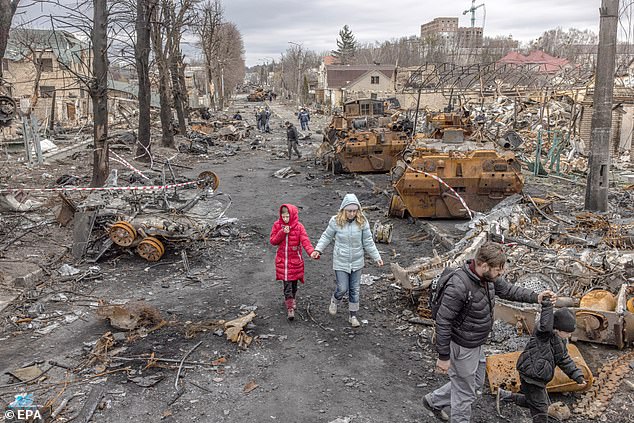 Dima looks at me and grins. He points to the sky and raises his finger to lips. ‘Shhh,’ he whispers.

Any movement or sound will send Russian drones whirring toward us. Far above, they patrol the skies, searching for their targets and waiting to drop their lethal payloads.

We’re in the Donbas in Eastern Ukraine, in a hidden army base on the front line of the war with Vladimir Putin’s troops.

Ukrainian soldiers with decades-old Kalashnikovs have dug into trenches while the drones of both sides buzz overhead.

Inside the base, electric light is banned and people use their phones for illumination. Men are prohibited from mingling outside: even a cigarette lighter could be enough to alert a drone strike.

For Putin’s purposes, a stalemate is better than a loss. And that is why we must not let him win. Because be in no doubt: if we look away, he will triumph by dint of our inertia — and he will not stop at Ukraine

And all day long, Ukraine’s soldiers go out on missions — and not all of them come back. The country is now sustaining losses of at least 200 troops per day and even more are injured, with limbs blown off from shrapnel and shelling.

‘We fight every day,’ Dima tells me with a shrug.

Yet to his great frustration — and that of his countrymen — is that the attention of the West is inexorably draining away from this bloody conflict.

Even as the air-raid sirens wail over bombed-out Ukrainian cities and Putin’s shells gouge craters in the streets and smash holes in the buildings of a European democracy, many in Europe are starting to shrug.

Yes, the cost of living is increasing back home. Double-digit inflation plagues much of the western world — and, as recent strikes have shown, inflation usually spells social and political trouble.

Energy prices are going through the roof. If war-weariness is creeping in, the reasons are understandable.

But let me tell you: all this is exactly what Vladimir Putin wants. He could scarcely have planned it better.

His initial delusions have fallen away: the country falling to his forces within hours or days in the face of a Russian blitzkrieg. 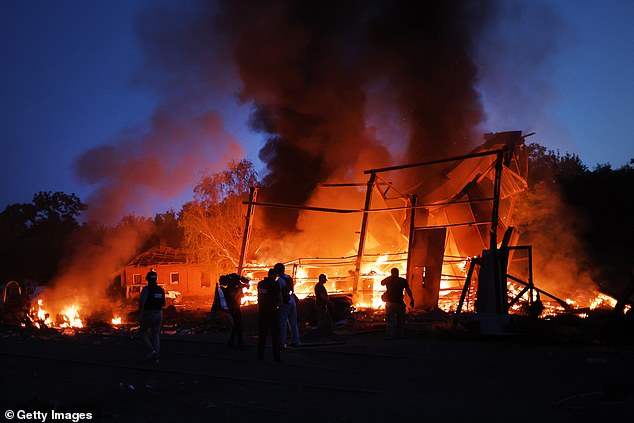 I have spent key moments of my career wearing the blue flak jacket of the war reporter. But this conflict is different from so many others in living memory

But the dictator has switched tactics and is now playing a longer, even more terrible game: piling men and materials into Ukraine with no thought to the appalling cost. Some 26,000 Russian soldiers have now been killed according to Ukrainian estimates.

Putin hopes that once both sides become entrenched in a bloody quagmire, the West — especially continental Europe — will reframe his genocide as a parochial border dispute.

Perhaps, Europe’s leaders will reason, some lands can be ceded to the invader in a messy, face-saving compromise. Everyone can then go home — and, crucially, Russian oil and gas can continue to pour unimpeded into European homes and businesses.

For Putin’s purposes, a stalemate is better than a loss. And that is why we must not let him win. Because be in no doubt: if we look away, he will triumph by dint of our inertia — and he will not stop at Ukraine.

I have spent key moments of my career wearing the blue flak jacket of the war reporter. But this conflict is different from so many others in living memory. 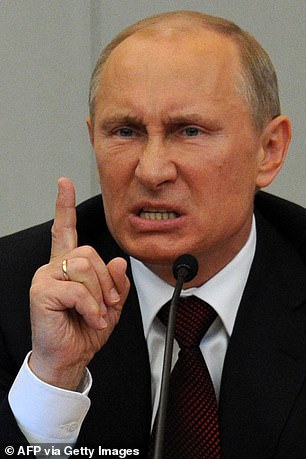 Putin hopes that once both sides become entrenched in a bloody quagmire, the West — especially continental Europe — will reframe his genocide as a parochial border dispute

In Yugoslavia, for example, gangs of paramilitaries slugged it out against one another. In Afghanistan, we were battling a Taliban enemy hiding in caves. In Iraq, Saddam Hussein’s forces fell within weeks — and so the real war soon became the counterinsurgency.

But the world needs to understand that Ukraine is state versus state, army versus army, tank versus tank. Cities are being flattened and the streets are being scarred with shell damage and littered with corpses old and young.

Industrial warfare has returned to European soil for the first time in 75 years. And nowhere is that more apparent than in the Donbas, the epicentre of Ukraine’s fight for survival.

Only yesterday, in a bitter blow, we learnt that Ukrainian forces have withdrawn from the besieged city of Severodonetsk, from which they had for weeks, and against all odds, managed to hold off the Russian assault.

Now Putin has almost total control of Luhansk province. Week by week, the map of Eastern Ukraine is turning red as Russian forces seize it, making a desert and calling it peace. It is a technique they honed in Syria — but it is happening on our own doorstep.

Some in the West understand this. Others do not.

And if my time in Ukraine has taught me one thing, it is that Putin might have won the war already, were it not for the British — and perhaps even for the current prime minister.

Driving me to the front line, Dima said: ‘I know Boris Johnson is controversial in your country. But here he is a hero.’

The Ukrainians’ support for Boris is unyielding and, to a Brit used to hearing scorn heaped on the PM back home — not least on the relentlessly negative BBC — a little jarring.

Boris may be afflicted by nightmarish domestic headlines and losing support from British voters and his own backbenchers. Yet he is more popular in Kyiv than Kettering, and on Ukrainian army bases in the Donbas rather than Doncaster.

Like his great idol Winston Churchill, he recognised an existential struggle in Europe the instant one arose. And the people thanking him the most are the Ukrainians.

Yet if they admire his leadership in defending their struggle, they pour scorn on most of our European allies.

I have a revealing anecdote in this regard. Ukrainian women are sharing with glee a ‘meme’ on their phones at the moment. It consists of photos of Boris and France’s president Emmanuel Macron placed side by side.

In Ukrainian Cyrillic script underneath are the words: ‘There are two types of boyfriend. One is constantly on the phone. He worries about you but does nothing. The other travels 3,000km just to take a walk with you.’ 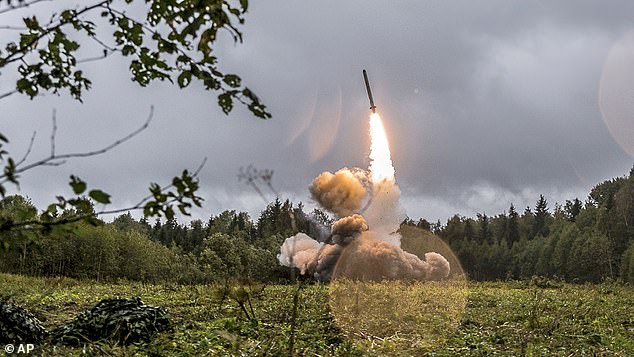 Now Putin has almost total control of Luhansk province. Week by week, the map of Eastern Ukraine is turning red as Russian forces seize it, making a desert and calling it peace. It is a technique they honed in Syria — but it is happening on our own doorstep. Some in the West understand this. Others do not

No prizes for guessing which leader is which ‘boyfriend’.

Macron has proved a Neville Chamberlain for this century, making feeble entreaties to the Russian dictator, sitting like a supplicant at the end of a preposterously oversized table in the Kremlin and recently urging that Russia — which has launched an unprovoked war of aggression against a sovereign nation — must not be ‘humiliated’ or ‘lose face’.

Olaf Scholz, Germany’s chancellor, has been little better: dragging his feet on delivering to the Ukrainians the heavy weaponry they badly need.

Meanwhile, Germany remains addicted to Russian gas. And given the soaring wholesale price of that commodity, until Berlin stops feeding from the Russian gas pipeline, Putin knows that the sanctions afflicting his country are only a minor inconvenience.

So what if a few McDonald’s restaurants have closed when you stand to make $320 billion from selling energy this year — up 35 per cent on the year before?

But the EU’s debacle in Ukraine is not, of course, purely down to the personal failings of these two men. Instead, Brussels’ usual administrative sluggishness has stalled the rapid response the world needs to deal with modern war — as have the bloc’s intractable internal politics.

Italy, Hungary and others bristled at Britain’s tough support for Kyiv in the earliest days of the conflict — with Rome worrying about the impact of sanctions on its precious luxury-goods industry. God forbid that the handbag-peddlers of Milan might suffer!

Additionally, some — though not all — European member states have repeatedly expressed worry about where they would secure their energy supplies if Putin turned off the tap. This has acted as yet another handbrake on the EU’s arms deliveries.

As Rome fiddled while Ukraine burned, Boris has busied himself supplying high-tech NLAWs — anti-tank missile launchers — by the lorry load to the besieged Ukrainians.

And if it wasn’t for that vital step, Russian troops might well be occupying Kyiv now.

It has been our NLAWs — alongside U.S. Javelins and Stingers, which take only a couple of hours to master — that have stopped Putin’s tanks in their tracks. And quite literally so: I’ve seen these blackened heaps of twisted metal, disembowelled by Western anti-tank weapons and turned into mobile incinerators for the luckless Russian conscripts forced to operate them.

The UK announced earlier this month that it is sending M270 multiple-launch rocket systems — sophisticated and long range, something that Kyiv is in desperate need of in this new phase of the war in the Donbas, where only the heaviest artillery will prevail.

It was this and other boldnesses that prompted the veteran U.S. diplomat, John Bolton, to say this week: ‘Britain has taken a leading role in the West’s efforts to defeat this aggression and to make the point to would-be aggressors around the world. In many respects, I say with some envy, taking a stronger and more effective view than the USA.’

Of course, Macron is not entirely wrong: there’s still a place for diplomacy with the Kremlin, whether we like it or not. We need to deal with Moscow. But it has to be undertaken from a position of territorial strength — as that’s the only language Putin understands.

Europe needs to heed the lessons of the last time war threatened to ravage the continent in the 1930s. Pandering to dictators only encourages them.

Earlier this month, in a photo-opportunity in Kyiv, Macron offered Zelensky a toe-curling hug, alongside the German chancellor Olaf Scholz and Italian prime minister Mario Draghi.

The three were there as a prelude to the EU bestowing Ukraine ‘candidate status’ in its bid to become a full EU member.

But I’m not holding my breath.

Frankly, I cringe at the thought of the Ukrainian soldiers I met in the Donbas learning that Brussels might just let them join a club that has shown itself to be only the most reluctant supporter of their life-and-death struggle.

These are brave people. They will fight to the end. They will never let Putin conquer swathes of their homeland — and it is a dangerous delusion by Brussels to think that the bauble of EU membership would somehow compensate for the loss of their lands.

In any case, it is more likely that Kyiv’s candidacy for the EU will gather dust on the bottom drawer of a Brussels desk over the next decade, just like the applications from Turkey and various Balkan countries.

As the war descends into one of attrition, it is time for decisive action.

I was in the Donbas in 2014 when thugs backed by Putin, wearing masks and armed with clubs and baseball bats, seized municipal buildings under the Russian separatist flag.

We didn’t do enough to tackle Putin then. We need to now — despite whatever concerns we have back home.

Ken Knowlton, a father of computer art and animation, dies at age 91

Boy, 3, rushed to hospital after being hit by a MOBILITY SCOOTER