According to the BARB rating agency, 5 million people tuned in to see the lighting of Jubilee beacons on Thursday, while 3.6 million saw Thanksgiving service at St Paul’s on Friday.

The challenge was to watch and report on the Jubilee TV coverage. So that’s what I did, eventually blinking in the light many hours later, exhausted, mind buzzing.

Were Charles and Camilla actually in EastEnders? Was Gloria Hunniford really everywhere? Can Kirsty Young present everything from now on?

All I know for sure is that if I had a pound for every time someone said, ‘Say what you love about this country, we know how to put on a show’, I would be very rich indeed. And it would be Dubonnet’s all-round.

The BBC was the first to go out with a special edition of that plushie from a show, The Repair Shop.

Linda Robson in a headscarf on Loose Women’s Jubilee Special

It contained items with a royal connection. The Chief Beefeater at the Tower of London even showed up in full uniform with the 103-year-old brass lantern lit by a single candle that is still used every night to close the tower. It had a broken handle and a broken window and it was wonderful to see it repaired, even if it must have crossed your mind as much as mine: shouldn’t Buckingham Palace have taken care of that? And also: shall we just crowdfund a torch for the poor man?

The next morning it was Trooping the Colour. 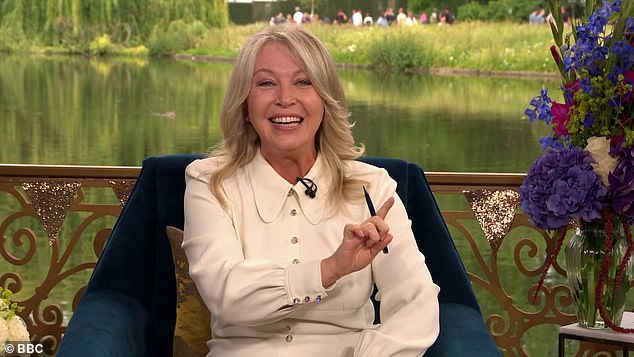 Kirsty Young hosts the BBC’s coverage of the Platinum Jubilee

The BBC played it fair, aware that its Diamond Jubilee coverage was condemned as ‘nonsense, celebrity-driven whining’. (All I can remember is a grim-faced queen on a barge in monstrous weather as Ferne Cotton looked around).

It marked Kirsty Young’s (incredibly welcome) return after a period of illness. She was calmly professional, calming, ignoring the rowdy ducks and always seemed interested in her guests’ anecdotes, even when they were wheeled out for the thousandth time.

Her first guests were Sir Michael Palin and Dame Penelope Keith. Sky News bravely fought back with Dame Joanna Lumley, while GB News had ‘Alastair Stewart and friends’ – even if it seemed like he had only one friend, the historian David Starkey.

Huw Edwards provided the BBC’s commentary, while GB News sometimes lost the plot (“There will be marching and more music… we’re a bit at sixes and sevens”).

On ITV at lunchtime it was Loose Women with the panelists donning the Queen’s ‘iconic looks’, something I may never be able to erase from my mind no matter how I try.

I might be haunted forever by Linda Robson in a headscarf tied under the chin and Gloria Hunniford in primrose yellow.

The One Show, meanwhile, on BBC, later featured Gyles Brandreth in a corgi sweater while presenter Alex Jones made the official Jubilee trifle under the watchful eye of Dame Mary Berry.

What a nice pudding that is. I was prepared for Jones to say, ‘Mary, can’t we just do Coronation Chicken again? Mayonnaise, curry powder, and Bob is your uncle?’

Next on the BBC, EastEnders. I can’t say what was going on as I haven’t looked since Den Angie gave the divorce papers, but I can tell you that Sharon is still there and seems to have a superpower that allows her from across the square can eavesdrop. 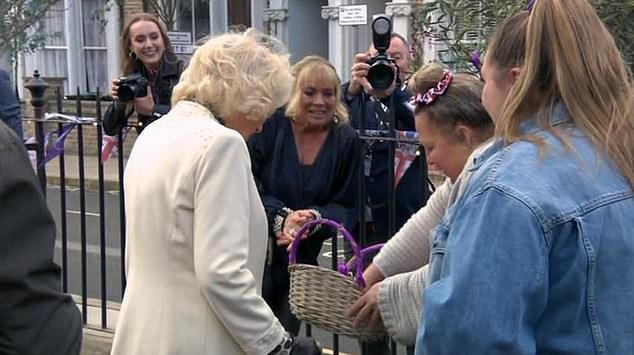 Camilla, Duchess of Cornwall in Albert Square during BBC soap Eastenders. She takes a purple ribbon and ties it around a tree in memory of Chantelle, who was abused for months by her husband Gray Atkins on the soap.

Camilla and Charles’ visit was not written and the agreement was that the cast would respond to whatever the royals said. It was all a bit of cringing and led to some strange exchanges. On to the lighting of the beacons, where Kirsty Young was alternately joined by Gloria Hunniford (“I don’t think any other country could do what we’re doing this weekend”) and singer Elaine Paige (“the pomp, we’ am the best at it’).

David Dimbleby covered the Thanksgiving service at St Paul’s Cathedral for the BBC, with much knowledge carried lightly, although he was right when he said the Queen had wanted to give Meghan and Harry ‘their own procession’? 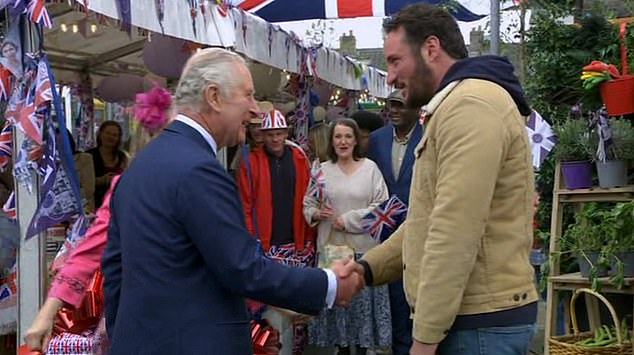 While meeting the residents of Walford, Charles is introduced to greengrocer Martin Fowler (pictured together), played by James Bye, who explains the history of his market stall going back generations in his family who have lived in the square

Didn’t it look like they were just kept separate to avoid frosty interactions with other members of the royal family?

Then it was back to the Tower of London in the evening when Clive Myrie looked closely at the Crown Jewels and couldn’t decide whether they are an acceptable part of our history or looted spoils of war.

Anyway, there are diamonds the size of your fist that are truly priceless and you wondered: An old man with a single candle locks up all the treasures safely at night? Come on, let’s crowdfund a torch for him.