Do parents still have to pay for their daughters’ weddings? 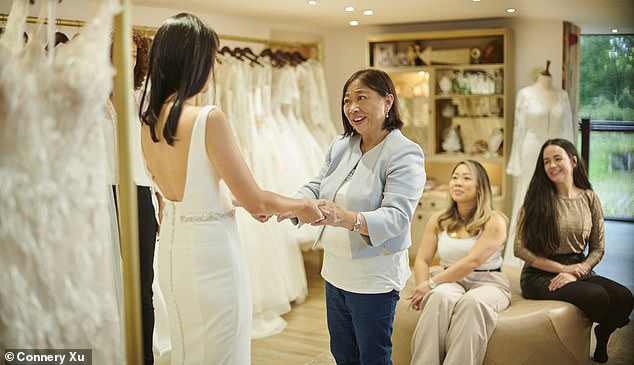 A mother-of-the-bride has sparked a debate over whether parents pay for weddings is outdated after she wondered if she’d be expected to pay for her daughter’s big day.

Go to the UK Parenting Forum mumsnetthe woman explained that her daughter, who is in her thirties, has been married to her boyfriend, with whom she has been living for a while, for ten years.

She explained that she and her husband could afford private education for their children, but less money is coming in now that they’re both retired.

“Am I unreasonable to think we’ve done our bit and our daughter has to pay for her own wedding?” she asked.

The majority of commentators argued that the idea of ​​parents paying for a wedding is outdated and that she should only contribute if she can afford it.

Others, however, claimed that it

A mum has taken to the UK parenting forum for advice on whether parents should still pay for weddings, explaining that she feels she has ‘done her part’ for her daughter (stock image)

Describing the situation, the woman wrote: ‘Our daughter recently got engaged to her long-term boyfriend of 12 years. They are both in their thirties, have worked and lived together for quite a few years.

“My husband and I are both retired, so no more money is coming in. We’ll still go on vacation, but we don’t have as much money as we used to.’

In a follow-up post, she clarified that her daughter has not asked her to pay, but has made comments about the cost of the wedding, raising concerns that she is being “stingy.”

She added that she will likely pay for “something” like the dress, but fears that “this gesture is seen as insufficient.” 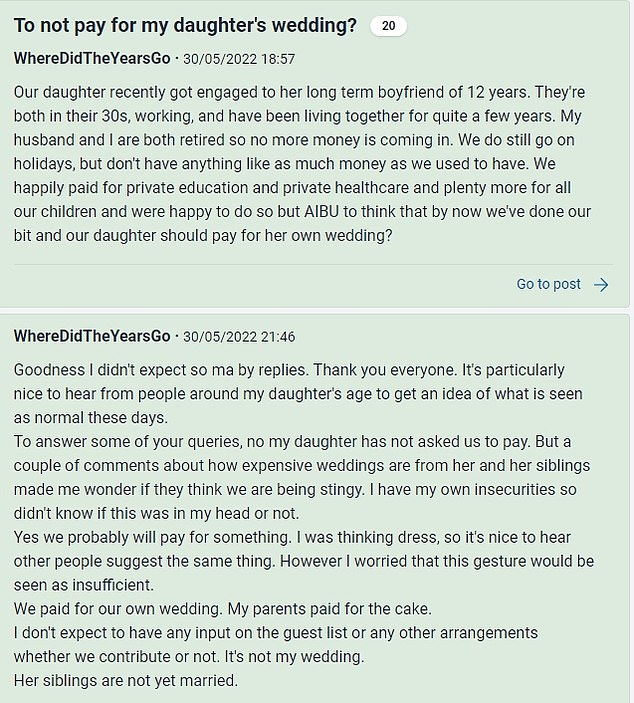 “No, you are not unreasonable at all,” one wrote. “I got married a few years ago and never expected my family to spend money on it. I chose to get married, so I had to pay. Can’t see how she can see it any other way.

“My dad paid for my dress as a token of appreciation, but I never expected it and we made sure we saved and budgeted correctly.”

A fellow mom was one of many who argued that the concept of paying parents is outdated. 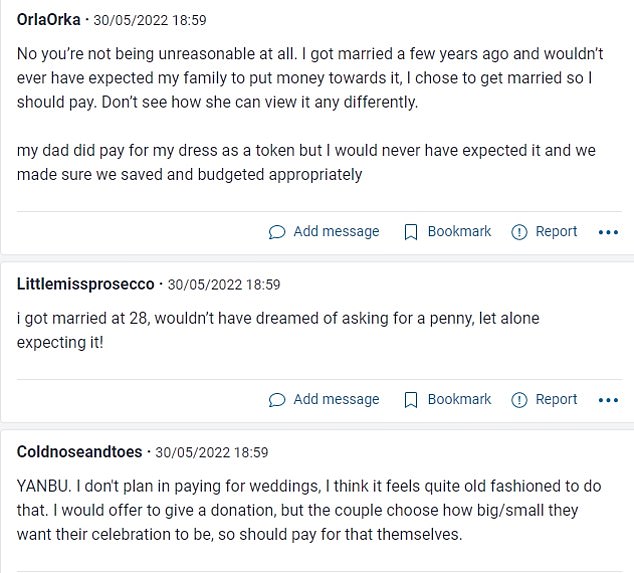 Commentators sided with the mom, saying parents shouldn’t expect to fund the big day and it’s the couple’s choice if they want to spend money on a wedding

“I’m not going to pay for weddings, I think it’s kind of old-fashioned to do that,” she said.

“I would offer to make a donation, but the couple chooses how big/small they want their party to have, so they have to pay for it themselves.”

Some insisted that the parents make a contribution, such as paying for their daughter’s dress.

Others pointed out that since her daughter was privately educated and had a comfortable upbringing with similar friends, this may have sparked an expectation.

“Why not contribute if you can?” one wrote. “It would be unusual not to, so in the context of having paid for so many things, perhaps surprising.”

One bride-to-be said she too was privately educated and in her friendship group, almost all the parents paid for their marriage or a significant portion of it.

“Maybe that’s where the expectation comes from, if there is one,” she explained.

Another agreed, saying: If you sent your kids to private school, many of their peers will have parents who pay for (part of) the wedding.

”Be aware that you choose not to do this. I would always want to help my children, my choice to have them/have more than one.”

Meanwhile, another labeled the mother “a little mean and stingy” and said she would definitely get some money from pensions.

And someone dismissed the idea that it’s outdated that parents pay, saying it’s “tradition” for the father to fund his daughter’s wedding.

“Doesn’t he want that for his daughter?” she asked.

Another agreed and said: Since when did this tradition die out? My friends in their sixties whose daughters recently got married have contributed a lot to their weddings. They wanted and felt that parents do that.’ 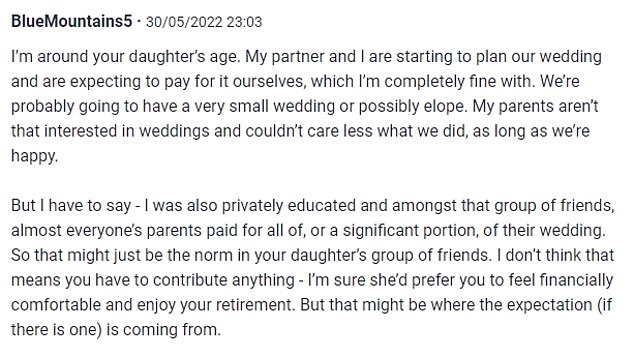 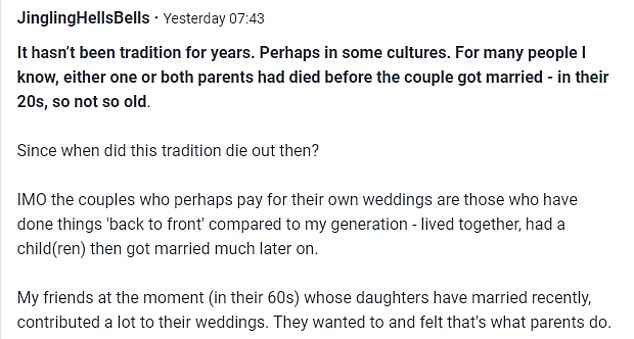 Can you sniff out the missing corgi in this special Jubilee puzzle?

Princess Eugenie is elegant in a recycled navy Palmer//Harding dress