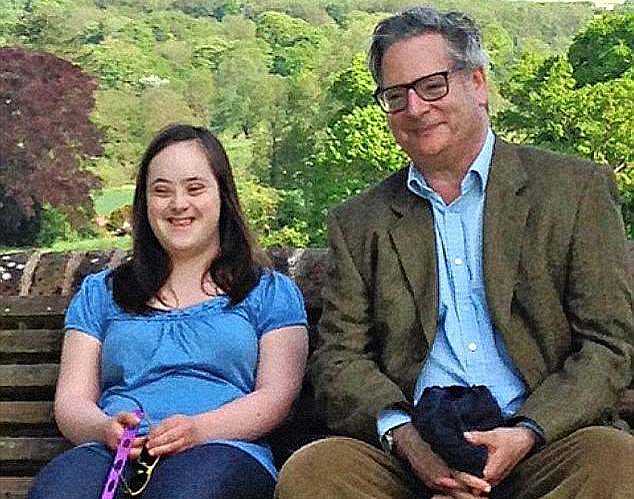 For sheer emotional impact, there could have been few television documentaries to match those broadcast last week by Channel 4 entitled Disability And Abortion: The Hardest Choice.

Maybe it bothered me more than some, because our youngest daughter, now 27, has Down syndrome.

One of the film’s two hosts was a young man with the condition, Ruben Reuter, who works as a disability reporter for Channel 4 News.

The other presenter was actress (with a Bafta nomination), Ruth Madeley, who has spina bifida, a condition in which the spine does not develop properly during pregnancy.

Both charismatic individuals had been involved in a campaign to change the law applicable to unborn children with disabilities. In particular, the Abortion Act of 1967, as amended by the Human Fertilization and Embryology Act of 1990.

Maybe it bothered me more than some, because our youngest daughter, now 27, has Down syndrome. (Dominic Lawson is pictured above with his daughter Domenica)

This allows abortion up to birth, when ‘there is a considerable risk that the child at birth would exhibit such physical and mental abnormalities as to be severely handicapped’.

In almost all other cases, termination after 24 weeks of pregnancy is prohibited.

The figure is based on the idea that after 24 weeks the child could be “viable” — that is, able to survive outside the womb. Still, the vast majority of babies with spina bifida or Down are no less “viable” during the third trimester of pregnancy.

And while it is difficult to discuss such matters, if a very late abortion of such a child is performed, he or she will be ‘terminated’ in the womb by lethal injection – since, if the baby comes out alive, in order to to do the same at the time would be a prima facie case of murder.

In 2019, the UN Special Rapporteur on the Rights of Persons with Disabilities stated that “the right to life includes the right to survive and to develop on an equal basis with others. Handicap cannot be a justification for the termination of life’.

Citing this, and aided by crowdfunding, a group, including a woman with Down syndrome (Heidi Crowter), brought a case to the Supreme Court last year, calling for the law to be changed so it wouldn’t be treated this way. discriminates. 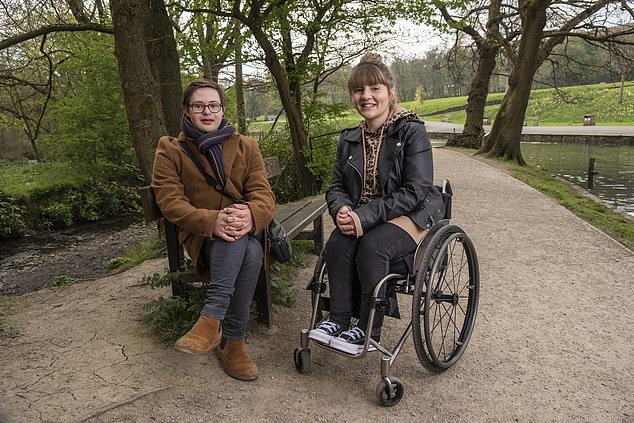 One of the film’s two hosts was a young man with the condition, Ruben Reuter, who works as a disability reporter for Channel 4 News. The other presenter was an actress (with a Bafta nomination), Ruth Madeley, who has spina bifida, a condition in which the spine does not develop properly during pregnancy

The court dismissed the claim “in its entirety,” but allowed an appeal, which was heard last month.

The decision of those three judges has not yet been published, but I would be very surprised if they set aside the earlier decision. The court regards such a change in the law as a prerogative of the legislator.

In the program, Ruth and Ruben meet Tanni Grey-Thompson, now a member of the House of Lords, who gained national attention and affection as a multiple medal-winning Paralympic. Like Ruth, Tanni Grey-Thompson was born with spina bifida.

But this MP had little encouragement to offer her interviewers, agreeing that “there should be equality in legislation.”

She told them: ‘It’s a relatively easy law to change if there’s the political will to do it, but the political will isn’t there. It is not a vote winner; it’s a vote loser. Could I change it? Not without another 350 or so colleagues supporting me, and a comparable number of MPs’. 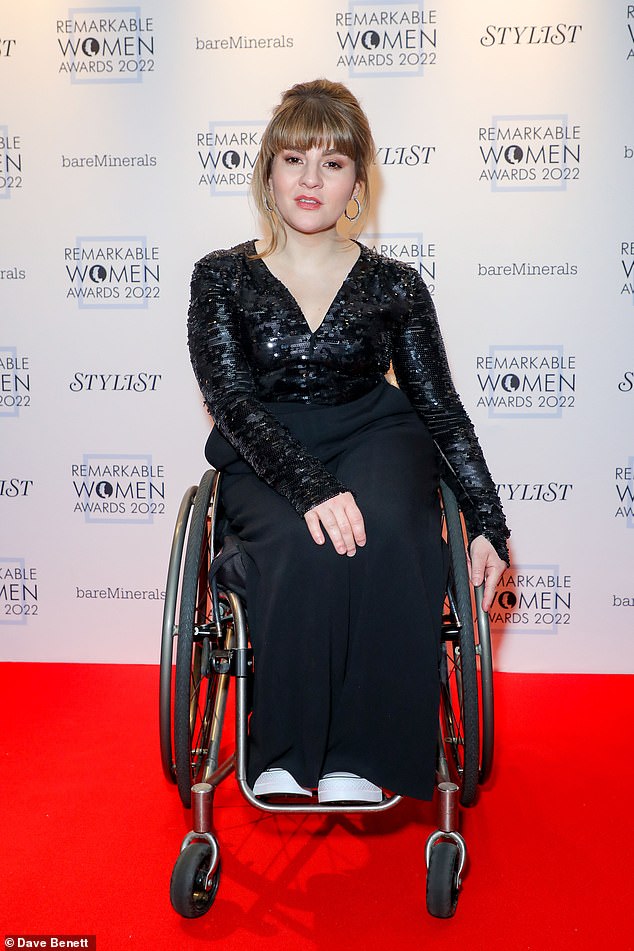 Early on in the documentary, there is an in-depth meeting between Ruth Madeley (pictured) and her mother Jacquie – still clearly upset about how the case had been handled at the time

In an interview two years ago, Grey-Thompson revealed that she had given birth herself (and now has an adult child), despite much discouragement from the medical profession.

“The first thing I was offered at my first scan was termination,” she said, “because ‘people like you shouldn’t have children,’ I was told.”

This touches on the most damaging aspect of the whole company: the way something defended under the ‘women’s right to choose’ is distorted by eugenics within the medical world, manifesting itself in unwarranted and persistent pressure on mothers to avoid pregnancies. end those deemed ‘unhealthy’.

So: a woman’s right to choose, limited by the right of doctors to force her to make the choice they think is the right one.

At the beginning of the documentary, there is an in-depth meeting between Ruth Madeley and her mother Jacquie – still clearly upset about the way the case had been handled at the time.

Ruth’s mother recalled how, after a scan revealed spina bifida, the medics “were very negative and said you would never really do much. But we just wanted you to be alive and take care of you.’

Ruth has what has been described as “the most severe form of spina bifida” – as if that itself were a death sentence.

But the documentary made her laugh over cocktails with a group of friends, living independently at home and with a long-term partner: the facts, as opposed to the horror fiction promoted to Ruth’s mother when she was pregnant.

This attitude is no less widespread now than when Ruth was born.

She and Ruben visit Maire Lea-Wilson’s home in Brentford, where they meet her three-year-old son Aidan, a bundle of energy and laughter, who has Down syndrome.

When she was pregnant with him (her second son) at age 34, scans revealed that he had Downs. Maire recalled: ‘We told them we didn’t want to talk about aborting him, but [the medics] kept saying. We were asked three times if we wanted to abort him, the last time a few days before his birth.

“They told us that maybe he wouldn’t be able to walk or talk, that his life would be very, very difficult. They made us feel that it would be very bad to bring a child like Aidan into the world.

This ties in with what Yvonne Goldstein said about the birth of her daughter Ellie (now employed by Gucci as a leading model): ‘The consultant came in and dangled her in his hands and said, ‘She has Down syndrome. She will never walk or talk or live a normal life. There are some leaflets outside’.’

My wife and I went through something similar, though less boldly, after our daughter Domenica was born. The doctors said she might never walk or talk. I don’t know anyone with Down who can’t walk.

And while it’s true that some people with the condition have very limited speech, Domenica is far from unusual in having a huge vocabulary, which she often uses to puncture my own pretensions. She also regularly beats me up at Boggle.

Above all, she has an infectious zest for life – the most of anyone I’ve ever known. A 2011 study in the American Journal of Medical Genetics, based on interviews with adults with Down’s, revealed that 99 percent of people with the condition “reported being happy with their lives, 97 percent loved who they are, and 96 percent loved how they look’.

As Ruben noted in the documentary, “That’s more than the rest of you.” Yet the official line, encapsulated in legislation, is that people like Ruben and my daughter ‘suffer’ from Down’s.

It is this word, which the medical profession persists in using, that should move so many parents to heed and end their advice: Who wants a child who just “suffers”?

This word should be deleted from the legislation.

I would also suggest that only in cases where the unborn child has a condition incompatible with life, terminations are offered after the 24 week cut-off. That would rule out spina bifida and Down’s, but not anencephaly, for example (when the brain doesn’t develop at all in the womb).

Maybe this is something Tanni Grey-Thompson could take up.

But even if the outdated wording of the law persists, there is a second, more pressing need that does not require legislation.

The Secretary of Health should instruct those who work at the National Health Service to provide expectant parents with an up-to-date and balanced account of the lives of people with conditions such as Down and spina bifida, rather than terrifying them with horror stories, when they are most vulnerable.

And the medics should definitely see the Ruth and Ruben movie.

Parents at new school chosen by William and Kate fear arrival of George, Charlotte and Louis