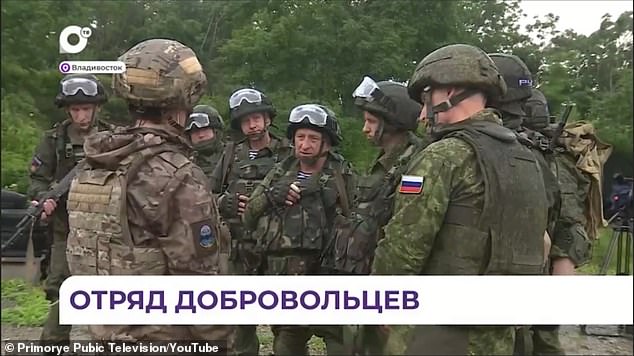 Russia has seemingly begun recruiting elderly men from all regions of the sprawling country to fight on the front lines in southeastern Ukraine as bitter fighting continues in Donetsk.

Video footage released on YouTube earlier this month showed a series of volunteer recruits from Primorsky Krai (Primorye), a region of Russia so far east that it borders North Korea, training with rifles in a field prior to their deployment to Ukraine. .

Several of the individuals captured in the video appear to be middle-aged and older men, who reportedly signed an agreement with DOSAAF (the Russian Volunteer Corps) to undergo a short training program before being shipped off to work together. to fight with the Russian 155th Separate Marine Guards Brigade.

“All these people are united by one desire: to protect their family and homeland,” news anchor Valeria Nikolaeva said.

“Despite the lack of combat experience, they are still prepared for anything,” she added, stating that the group had been awarded the “Tiger Battalion” designation.

“The toothless ‘Tigers’ aren’t so happy for some reason,” one comment joked.

The news that Russia is recruiting elderly volunteers living more than 5,000 miles from the conflict in Ukraine comes as Richard Moore, the head of British intelligence agency MI6, said he believes Moscow’s military is “running out” and may have to ‘pause’ their invasion in the coming weeks due to a lack of manpower.

Video footage that has surfaced on YouTube showed a series of volunteer recruits from Primorsky Krai (Primorye), a region of Russia so far east that it borders North Korea, training with rifles in a field prior to their deployment to Ukraine. 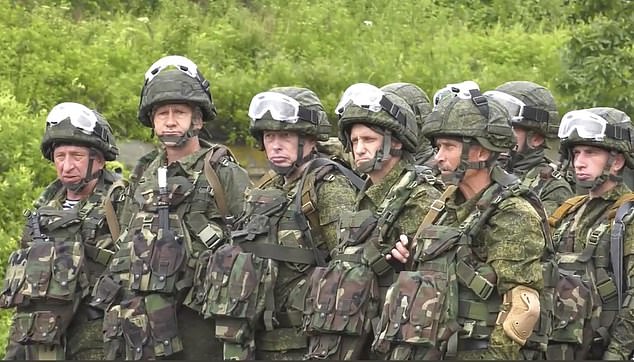 Several of the individuals captured in the video appear to be middle-aged and older men, who reportedly signed an agreement with DOSAAF (the Russian Volunteer Corps) to undergo a short training program before being shipped off to work together. to fight with the Russian 155th Separate Marine Guards Brigade 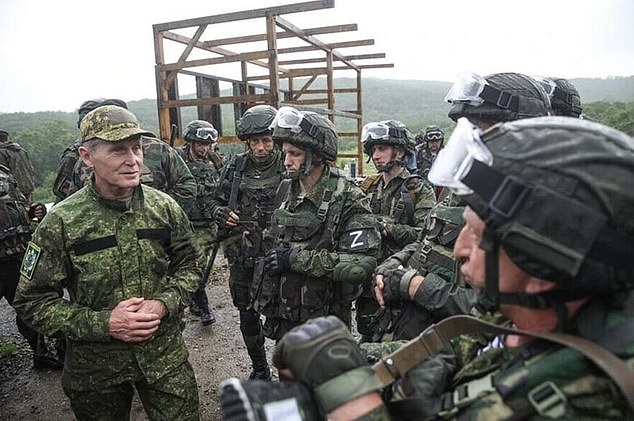 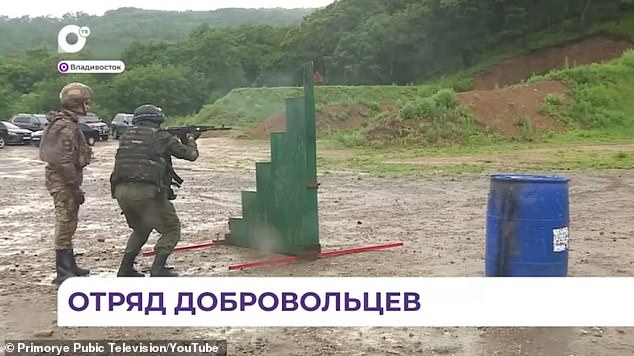 One volunteer seemed happy to receive his training and go to fight in Ukraine after buying the Russian state media’s story about Putin’s special operation to rid Ukraine of Nazis.

‘This is not just any special operation. I think this is cleaning. Cleansing of Fascism. Our grandfathers didn’t finish it – we have to finish it,’ the recruit barked.

“It’s not good if children, instead of playing games and living a happy life, tell adults how to hide from bombs and talk about what kind of ammunition is used,” said one volunteer, without referring to Ukraine. while wearing a mask and refusing to be mentioned in the interview.

‘My son is the commander of an air strike platoon’ [in Ukraine]said another. “I hope we’ll stand side by side.”

Gumenyuk stated that Russia is calling up “completely incomprehensible troops”, specifically referring to the Tiger battalion as an example of “unreliable” troops.

‘Reserves are sought out in socially unreliable groups… [They are likely] be cannon fodder. But we are preparing for all scenarios,” Gumenyuk said, adding that the enemy should not be underestimated.

The news about the Tiger battalion comes as MI6 chief Moore stated that Putin’s war effort is “running out” in Ukraine and suggested that his troops may need to “pause” their attack in the coming weeks.

Moore said the war was “obviously not over” but that the Russian president had made an “epic failure” with his disappointing invasion of the sovereign state.

Speaking at the Aspen Security Forum in the US, Mr. Moore said: “I think he suffered a strategic failure in Ukraine. It’s clearly not over yet.

“He has clearly made progress, and the Russian armed forces have made gradual progress in recent weeks and months, but it is a small amount.

“We’re talking a few miles ahead. If they take a city, there’s nothing left. It’s erased. 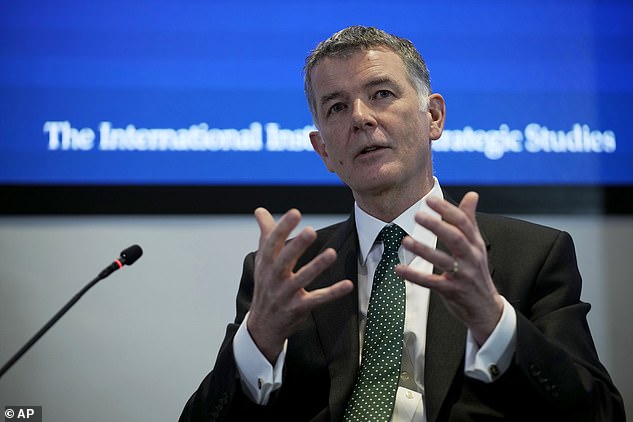 Richard Moore (pictured), the head of British Secret Intelligence (MI6), said the war was “clearly not over” but the Russian president had clearly “failed epically” by invading the sovereign state 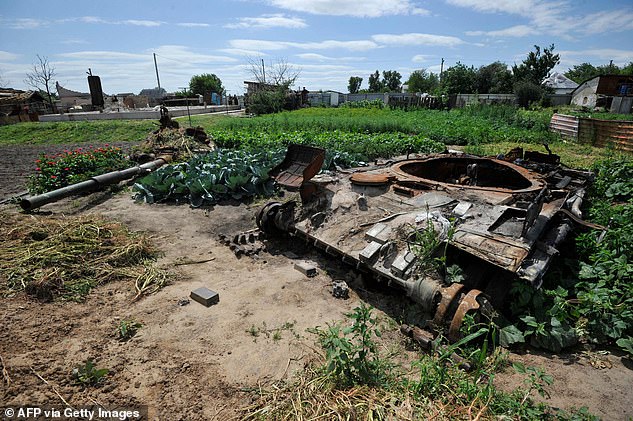 Vladimir Putin is “running out of steam” in Ukraine and his troops may have to “pause” in the coming weeks, the head of MI6 has said. Pictured: The remains of a Russian main battle tank, destroyed during fighting in the village of Velyka Dymerka, northeast of Kiev 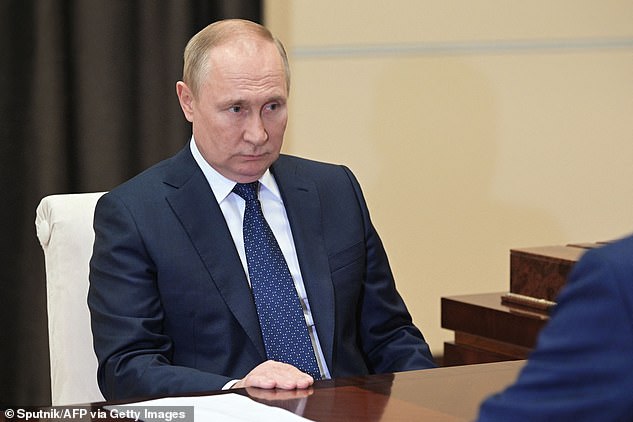 The news comes as Vladimir Putin (pictured in the Novo-Ogaryovo residence outside Moscow) suffered heavy casualties and saw at least 66 of his colonels killed in the fighting.

“I think they’re running out. I think our estimate is that the Russians will find it increasingly difficult to supply manpower in the coming weeks.

“They will have to pause somehow and that gives the Ukrainians a chance to hit back. Their morale is still high. They’re getting more and more good weapons.’

With winter approaching and pressure on gas supplies, “we are entering a difficult time,” said Mr Moore, who believes a Ukrainian struggle could spread the benefits across Europe.

“I also think, to be honest, it will be an important reminder to the rest of Europe that this is a winable campaign by the Ukrainians.”

The United States estimated earlier this month that Russia has lost more than 15,000 troops since the war began on February 24.

But the Ukrainian armed forces estimate the number of Russian casualties much higher, almost 40,000.

They sing lullabies for you, give you heat massages and use the very latest NASA technology