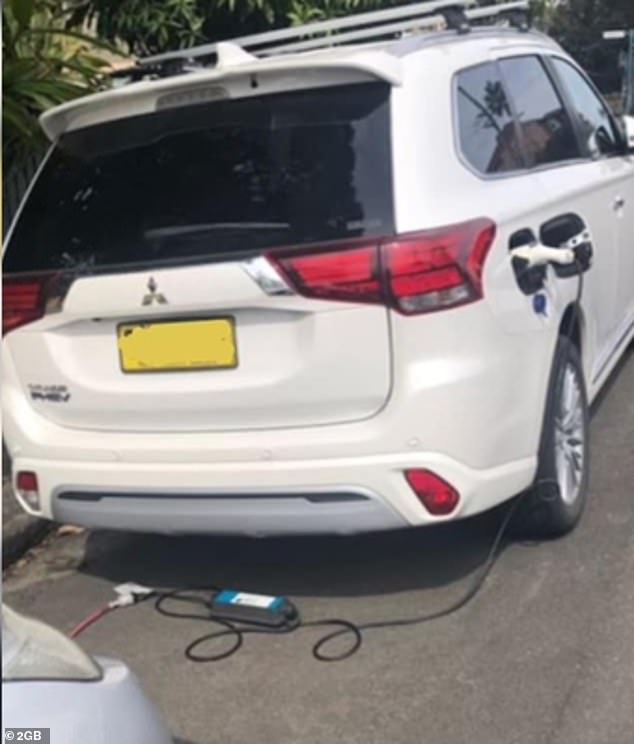 Astonishing images have spotlighted the potential dangers of electric vehicles, fearing they could become a “lawyer’s picnic.”

An electric car parked on a street in Manly, on Sydney’s northern beaches, was spotted charging through a long cord.

The cable runs over the front gate, which winds from the road into a driveway and into a house nearby.

The owner was even kind enough to install a hazard cover over the portion of the cord that runs over the public footpath so locals don’t trip over the cord as they walk by.

A close-up photo shows the car surrounded by electrical cables.

He fears the issue could soon become a major dilemma for neighborhoods where electric vehicle owners, who don’t have a garage or driveway, must park on the street.

“It’s strange, you have to see it to believe it, it’s one of the longest extension cords I’ve ever seen,” Fordham told listeners Friday.

The person was lucky enough to find a park outside their home. What if the only parking space you can find is on the other side of the street?

“Will you put the extension cord across the street with a piece of tape over it?”

‘What happens if there are 10 electric cars in the street?’

Fordham said he’s also gotten more images of the long cord trail that remains there even when the car isn’t there.

“It’s both a tripping hazard and an electrical hazard for children,” he told the program. 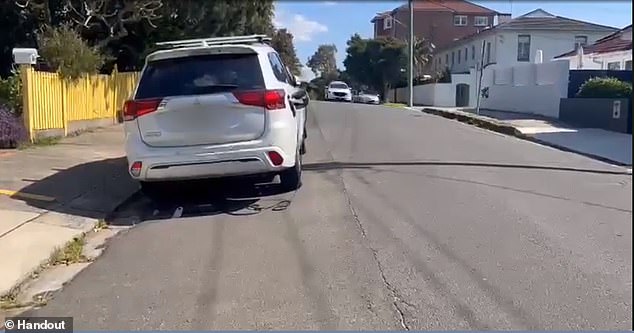 “If someone stumbles, what are they going to do. Are they going to sue the homeowner because their contents will probably be covered by civil liability, but insurance companies will say ‘it’s outside your house, we don’t cover’.

“The council will say it’s not their problem, so it’s going to be a lawyer’s picnic.”

“The electricity cables are going to get wet one day.”

‘I think some municipality wanted to run the cables through poles, but it’s going to be a spaghetti junction. It’s going to look terrible.’

The Electric Vehicle Council is urging every state and territory to set targets for electric car sales after the ACT recently became the first Australian jurisdiction to ban new and diesel vehicles from 2035.

Depending on the battery, charging electric cars takes between 15 minutes and 20 hours. 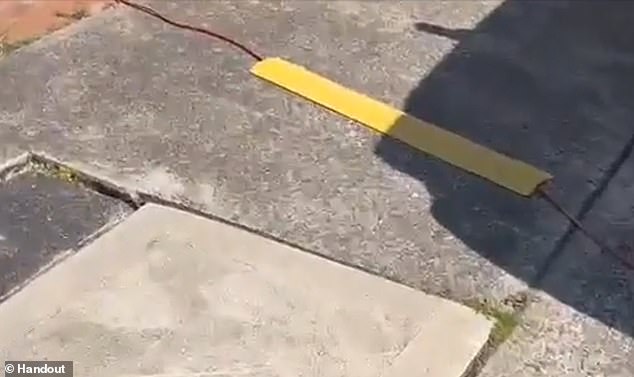 Fordham called on authorities in Australia to find out how electric cars will be charged in the future, with at least one council on Sydney’s north coast planning to remove ramps.

“I think only 30 percent of the people on my street have garages and a lot of municipalities are getting rid of driveways,” Fordham said.

“They claim that if you have a driveway, you endanger school children because you reverse down the driveway while children are walking on the sidewalk.”

‘We are reducing driveways and garages, so that there are fewer charging points for your electric car, so that they take to the streets.

‘Then you have to get the power from the house to the car on the street and that involves a lot of extension cords.’ 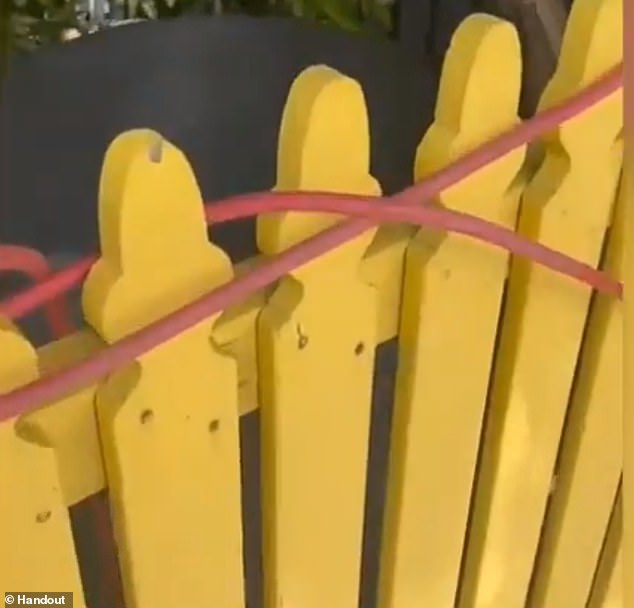 Push to ban the sale of petrol cars

New petrol and diesel cars will not be allowed to be sold in Sydney within five years if a radical plan from a think tank is approved.

The Sydney Committee, an urban policy think tank composed of a highly influential group of business leaders and infrastructure experts, has put forward a series of proposals to halve carbon dioxide emissions by 2030.

The commission released its Decarbonising Sydney report in August revealing plans to ban sales of petrol and diesel cars by 2027 and gas appliances by 2030. Increasing the number of electric vehicles on the road is a recommendation, along with no new gas connections and the electrification of taxpayer-owned schools, hospitals, homes and office buildings 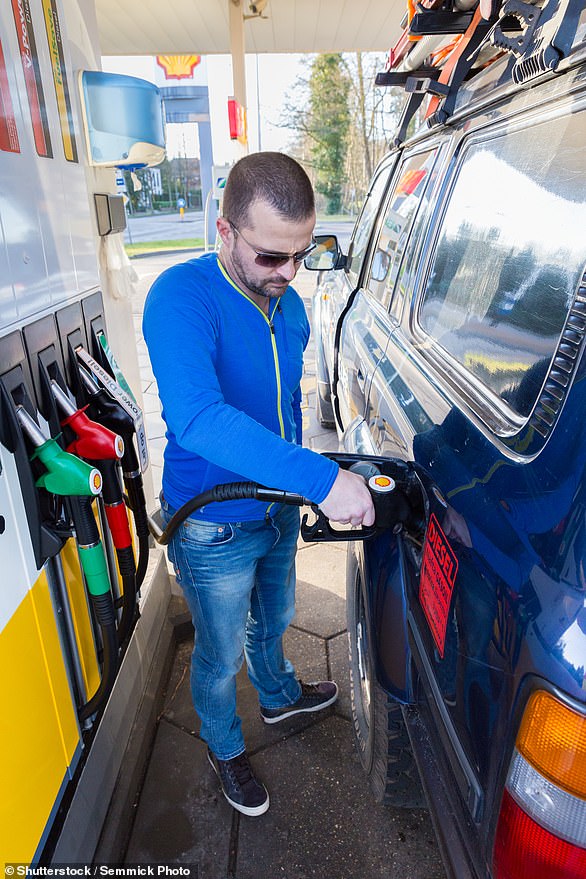 “NSW’s climate policy is leading the nation, but this inquiry is a wake-up call that Sydney is not on track for net zero – we have plenty of work to do,” said committee spokesman Sam Kernaghan.

Diesel and petrol cars are the biggest emitters in the area and should be completely replaced by electric vehicles, according to the report.

A general ban on the gas-guzzlers would follow in the steps of the ACT, which plans to phase out all emissions-producing vehicles by 2035.

“The NSW EV strategy aims to have electric vehicles account for half of all new car sales by 2030, leading to approximately 15 percent of the passenger fleet being electric,” the report states.

“Our Accelerated Net Zero Transition model shows that we need a much faster ramp up: All new cars must be electric by 2027, so EVs form approx. 30 percent of the passenger fleet in 2030, twice as much as in the Steady Transition approach.’ 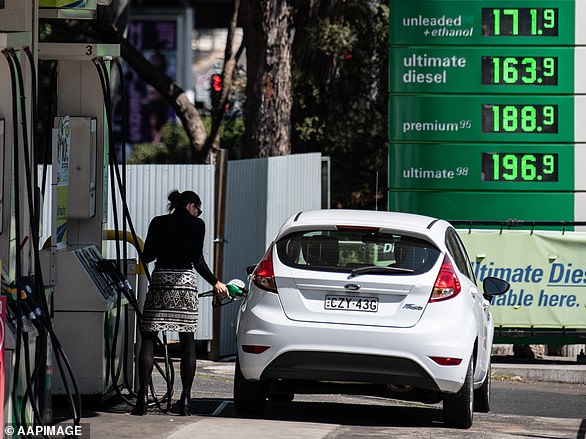 The commission released its Decarbonising Sydney report in August, showing that diesel and petrol cars are the biggest emitters in the area (stock image)

The plan to ban petrol car sales in NSW by 2027 is more ambitious than other countries, with Germany and the UK waiting until 2030 and California 2035.

It also aims to replace all commercial and government fleets with electric vehicles by the same year.

“A major reason why the supply of electric cars in Australia is limited is the lack of fuel standards, along with no future ban on new petrol/diesel vehicles,” the report said.

“A well-announced ban on the sale of petrol and diesel cars would also send a clear signal to the industry that EV charging, maintenance and supply chain networks need to be put in place.”

Thompson Hotel to Offer One Bed Apartments on Billionaire’s Row Starting at $1.3 Million

Chris Eubank Jr vs Conor Benn STILL ON despite drug…