Sophie Wessex looked stylish in a £380 ME+EN floral dress when she arrived in Belfast for a visit to mark the Queen’s Platinum Jubilee.

The 57-year-old smiled as she arrived in town with her husband Prince Edward, 58, with the couple leaving their children Lady Louise Windsor, 18, and James, Viscount Severn, 14, at home.

Sophie wore a ME+EM flower-patterned dress for the occasion, with layered details on the maxi hemline. It is currently out of stock.

Meanwhile, she wore her blond hair curled loosely and elegantly tucked behind her left ear.

The royal opted for natural makeup, with bronzer to give her a natural glow and light pink lipstick.

The Earl and Countess of Wessex visit Belfast where they will join the public in a 1950s themed celebration on the city’s Royal Avenue.

The pair will meet groups of artists, including the Belfast Busking Band, and will hear stories about the city’s diverse communities over the past 70 years, which will be explored through fashion, photography, music and dance.

Edward, 58, will also meet older members of the local community brought together by Age Friendly Belfast to share their memories and experiences.

Meanwhile, Sophie participates in special platinum anniversary craft activities, making crowns and corgis with schoolchildren, before checking out a showcase of fashion through the ages.

The pair will also try a local delicacy, the Belfast Bap, and will visit stalls at the Retro Jubilee Market. 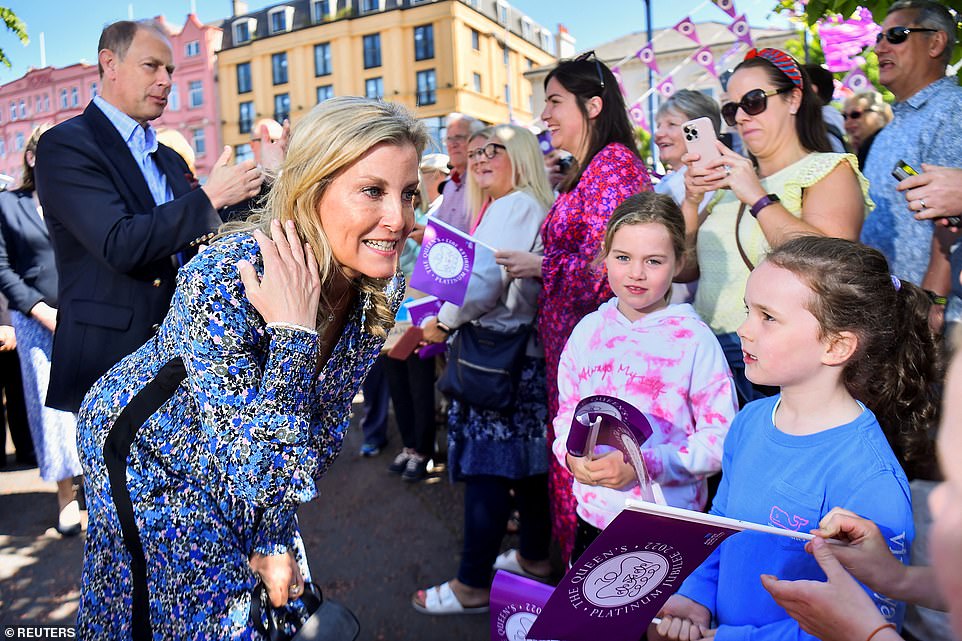 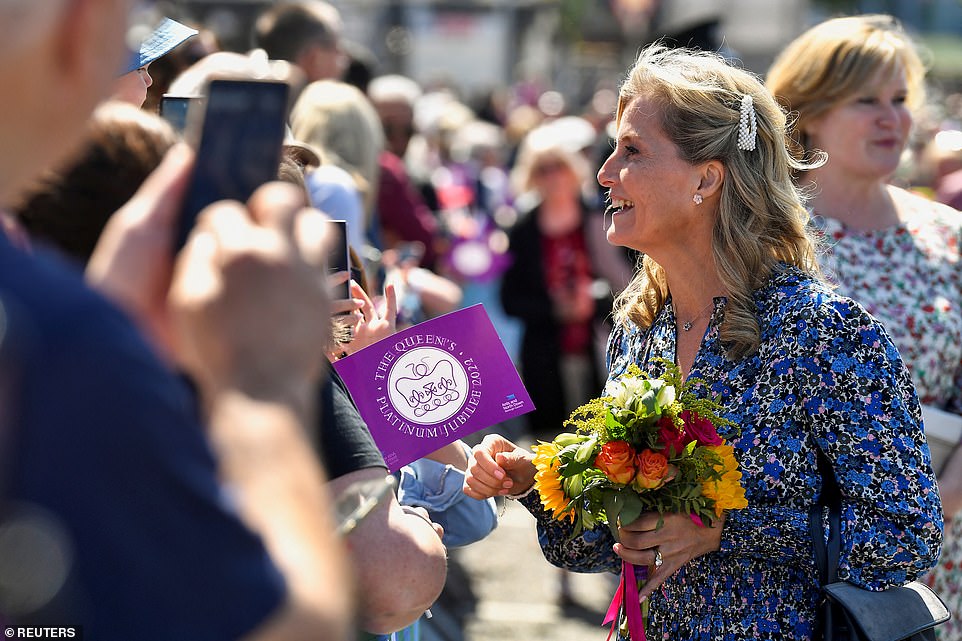 Before leaving Belfast, the Earl and Countess will watch a community dance troupe perform a routine that celebrates the last seven decades.

The royal couple will then travel this afternoon for their second engagement in Northern Ireland.

Prince Charles and Prince William are scheduled to address a live audience of 22,000 at a special concert in front of Buckingham Palace today, as millions on the third day of the Platinum Jubilee extravaganza marking her 70 years on the throne.

The event featuring Diana Ross, Queen + Adam Lambert and Alicia Keys will take place in a temporary amphitheater built around the Victoria Memorial outside the palace.

The 96-year-old monarch is not expected to attend the nighttime outdoor event with rain in the forecast. Problems with moving, which the palace describes as “episodic mobility issues,” have limited the Queen’s public appearances in recent months.

The Sovereign chose not to attend Saturday’s Epsom Derby, the second time in as many days that her difficulties getting around have deprived the crowd of a chance to see her. On Friday, the Queen skipped a special thanksgiving service in her honor at St. Paul’s Cathedral in London. 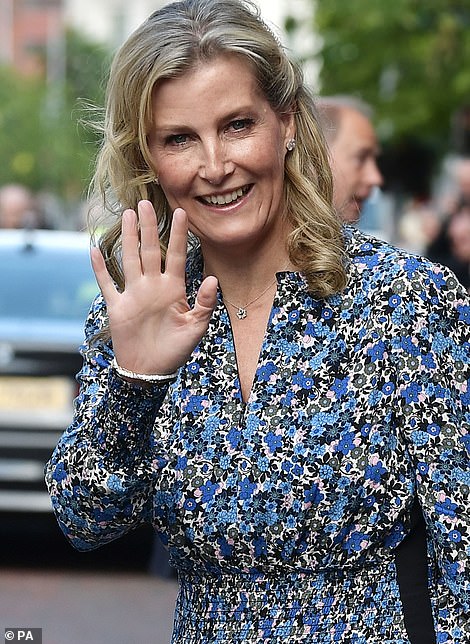 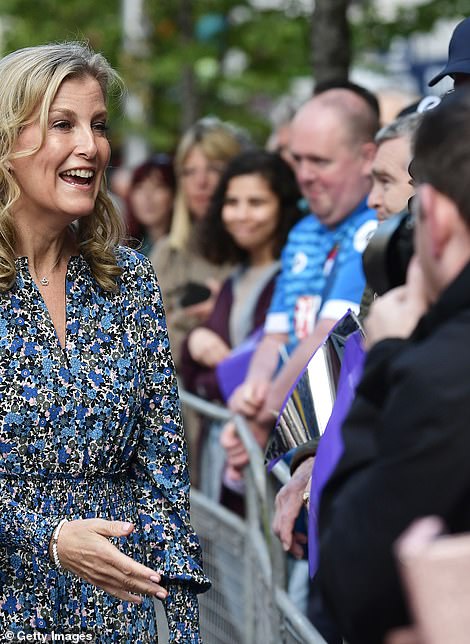 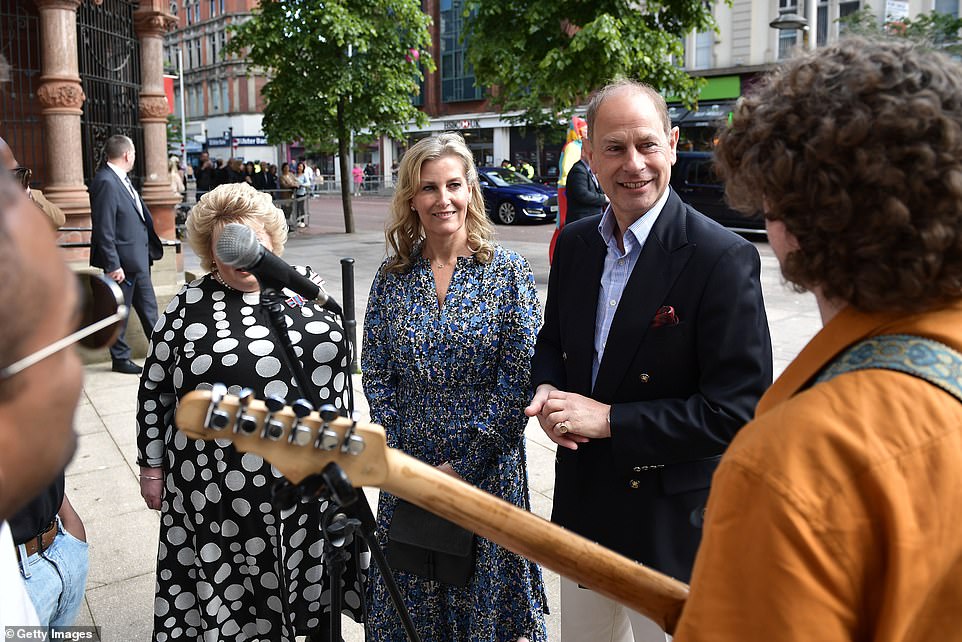 The royal chose natural make-up, with bronzer to give her a natural shine and light pink lipstick

Prince Harry and his wife Meghan were among nearly 50 members of the royal family who gathered to honor the absent head of state. It was their first public appearance in the UK since they relinquished royal duties two years ago.

Sophie looked glamorous yesterday as she joined other members of the royal family at the Thanksgiving service on the second day of the Queen’s platinum anniversary celebrations.

She arrived for the service at St Paul’s Cathedral with her husband Prince Edward, and their children Lady Louise Windsor, 18, and James, Viscount Severn, 14.

Sophie wore a sparkly Suzannah dress to the event celebrating the 70th anniversary of her mother-in-law, the Queen, and paired the dress with a custom dyed cocktail hat from Jane Taylor fashion store.

The royal sweetly coordinated with her daughter Lady Louise, 18, who wore a pale silk dress and a sequined tie from the same hatter.

Sophie completed her look with a pale pink hat, keeping her makeup to a minimum.

She wore her blond locks smooth back in a chic bun with elegant dangling earrings framing her face.