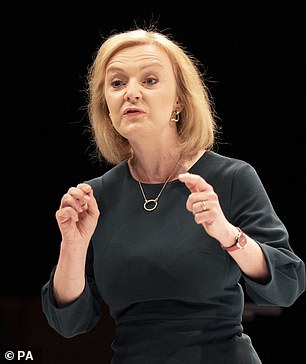 Plan: Prime Minister Liz Truss has told MPs the moratorium on fracking will be lifted

Shale gas extraction — better known as fracking — could overshadow production in the North Sea within 15 years after Liz Truss lifted a controversial ban.

The new prime minister has told MPs that the fracking moratorium will be lifted in areas where local communities support the industry’s plans, paving the way for a boom.

Figures from the National Grid show that the contribution of fracking to UK energy needs could match the North Sea by 2037 and surpass it the following year.

The analysis suggests shale production would start slowly in 2026, before becoming one of the UK’s main energy sources.

However, Truss claimed that extraction from shale could flow within six months, which could allow it to reach its peak much earlier.

Fracking has proved controversial. Residents living near sites have complained about the use of chemicals, groundwater contamination, noise, air pollution and even earthquakes.

Ministers stopped fracking in England in late November 2019 after a series of clashes between shale gas companies and local communities. The industry strongly denied many of the allegations and said the process has improved over the years.

The National Grid forecast indicates that fracking could help the UK significantly reduce its reliance on expensive or unreliable imports.

Fears for Britain’s energy security have been fueled by the Russian invasion of Ukraine, which has sparked a gas crisis across Europe and sent household bills soaring.

This prompted the government to announce an ‘energy price guarantee’ last week, capping the average annual household bill over the next two years at £2,500 a year. Andrew Bridgen, Tory MP for North West Leicestershire and a vocal supporter of fracking, greeted Truss’ announcement on Thursday. “I am delighted that the moratorium has been lifted,” he said.

“We should have started fracking two years ago. And the next best time to start is immediately. We need that gas.’

He said: ‘The development of shale gas in the UK offers community benefits, tax revenues, tens of thousands of well-paid and skilled jobs, a real opportunity to improve the UK and energy security. Import offers none of these benefits.

Fracking releases a natural gas that is found in shale rock. It works by injecting water, sand and chemicals into the rock under high pressure to create cracks or fractures so that gas can be extracted.

In its latest forecast in July, the National Grid listed four ‘future energy scenarios’ surrounding the UK’s consumption and supply over the next three decades.

Shale exploration is mentioned in only one scenario – one that means the UK will not meet its net emissions target by 2050. The National Grid said it acknowledged that “high levels of public oversight” exist around shale.

But it said fracking could reduce our future dependence on imports — and by 2040 it could supply 12 billion cubic meters of gas, or 15 percent of current demand.

This will coincide with a decrease in the supply from the North Sea to almost nothing by 2050.

The UK currently has two shale gas wells ready for use through fracking company Cuadrilla.

And British energy explorer IGas said in March it could heat homes with shale gas by the end of the year if the fracking ban is lifted. It said it could prepare a planning application in weeks to extract shale gas in Nottinghamshire, which can be used to heat up to 125,000 homes.

IGas had developed a shale site in Misson village prior to the 2019 moratorium.

But critics have argued that ministers should prioritize cheaper and more easily accessible renewable energy over shale.

Even Kwasi Kwarteng, now Chancellor, has expressed skepticism about fracking.

In March, the then Business Secretary wrote in The Mail on Sunday: ‘Even if we lifted the fracking moratorium tomorrow, it would take ten years to extract sufficient volumes, and it would be costly to communities and our precious countryside. .’

An industry expert, who would not be named, said: ‘We know from North America’s experience that shale resources vary greatly.

“There will be good wells and bad wells. You can’t just pass by the first one and think it’s a gusher. That could be the exception rather than the rule.’