From Europe to China, hidden history revealed by global drought 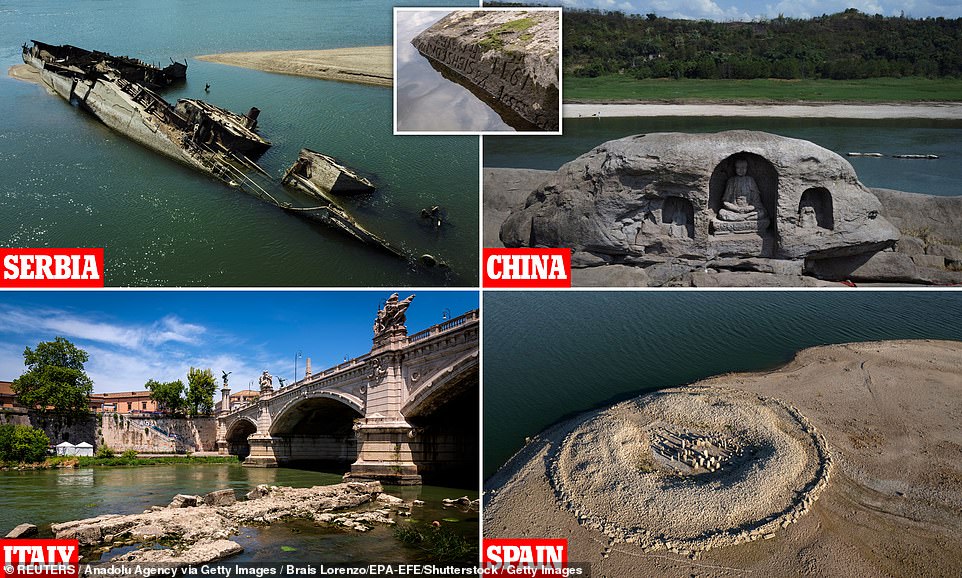 Weeks of baking drought across the world have seen water levels in rivers and lakes plunge, exposing long-submerged ships, historical sites and ancient statues. Europe’s worst drought in what could be 500 years has revealed so-called ‘hunger stones’, German warships sunk during the Second World War and a prehistoric stone circle dubbed the ‘Spanish Stonehenge’. 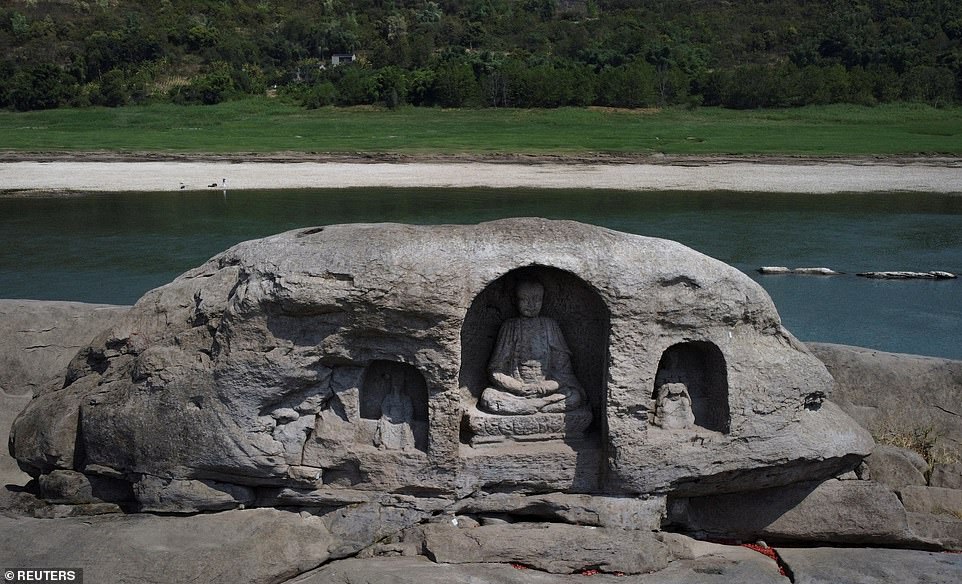 In China (pictured), plunging water levels have revealed a submerged island and a trio of Buddhist statues on it that are believed to be 600 years old, while in the US a drought-stricken lake revealed the bodies of five people believed to have been killed by the Mafia. 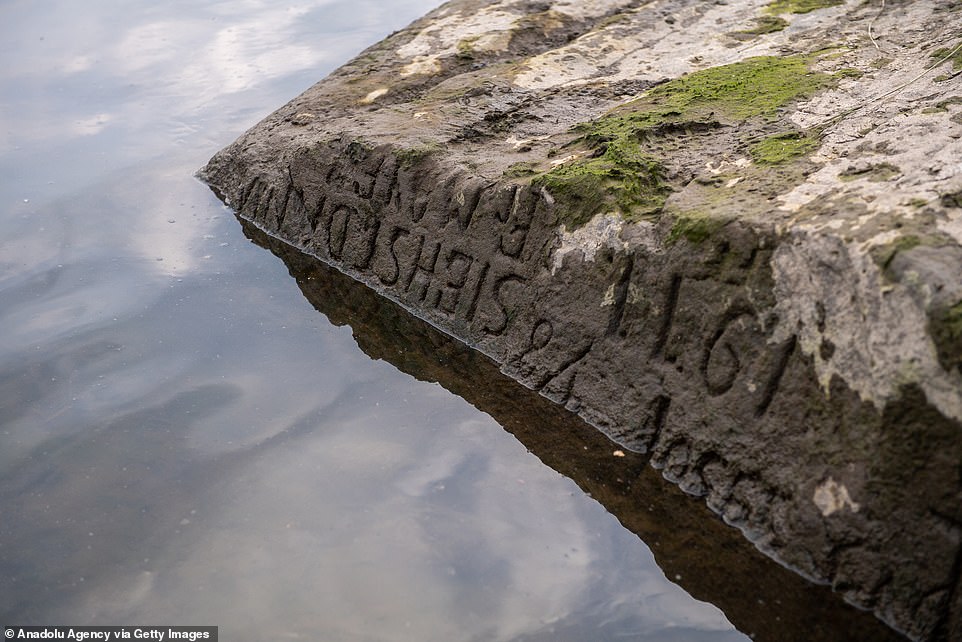 Along the River Elbe, which flows from the Czech Republic to Germany, the drought has revealed the ominously named ‘hunger stones’ (pictured), which bear the inscription ‘if you see me, then weep’. 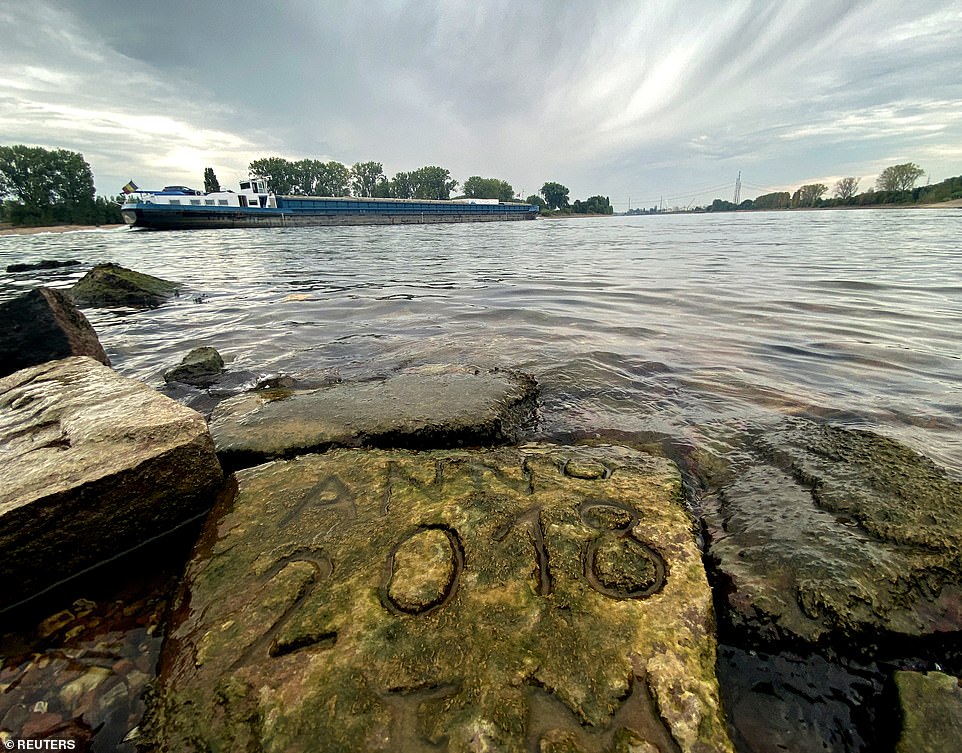 The re-emergence of the boulders, chosen to record low water levels, is seen by some as a warning and reminder of the hardships faced during past droughts. Dates visible on stones seen in Worms, south of Frankfurt, and Rheindorf, near Leverkusen, included 1947, 1959, 2003 and 2018. The drought has also exposed the hulks of dozens of explosives-laden German warships sunk during the Second World War near Serbia’s river port town of Prahovo (pictured). The vessels were among hundreds scuttled along the Danube by Nazi Germany’s Black Sea fleet in 1944 as they retreated from advancing Soviet forces, and still hamper river traffic during low water levels. 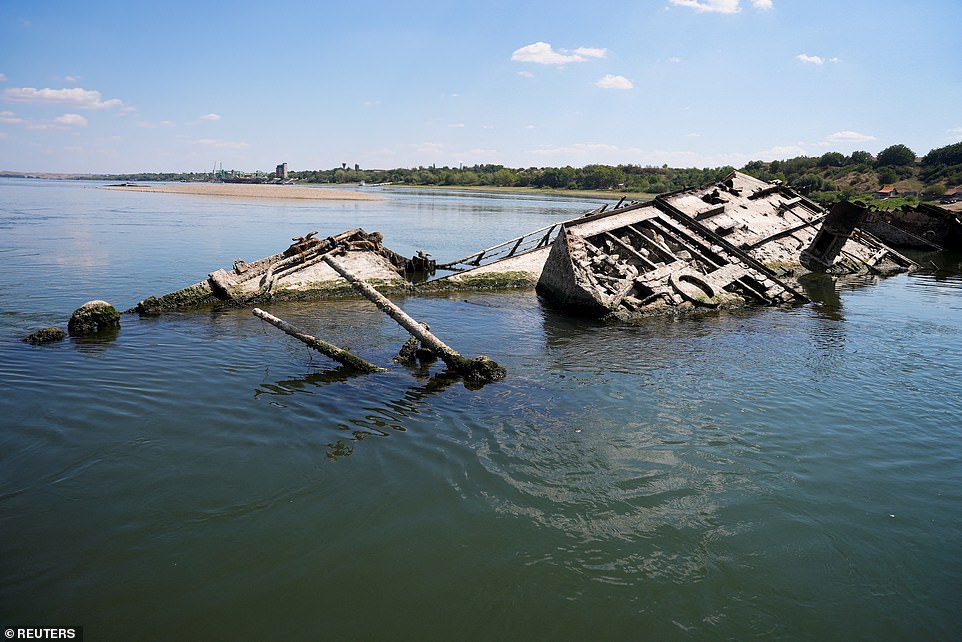 The navigable channel of western Europe’s longest river, a trade and transport artery that passes through ten countries, is usually several hundred yards wide where it flows through the Serbian city of Novi Sad. But drought and extremely high temperature have now reduced that to a narrow lane and Serbians are fighting to keep it open for cargo barges and ships by dredging. 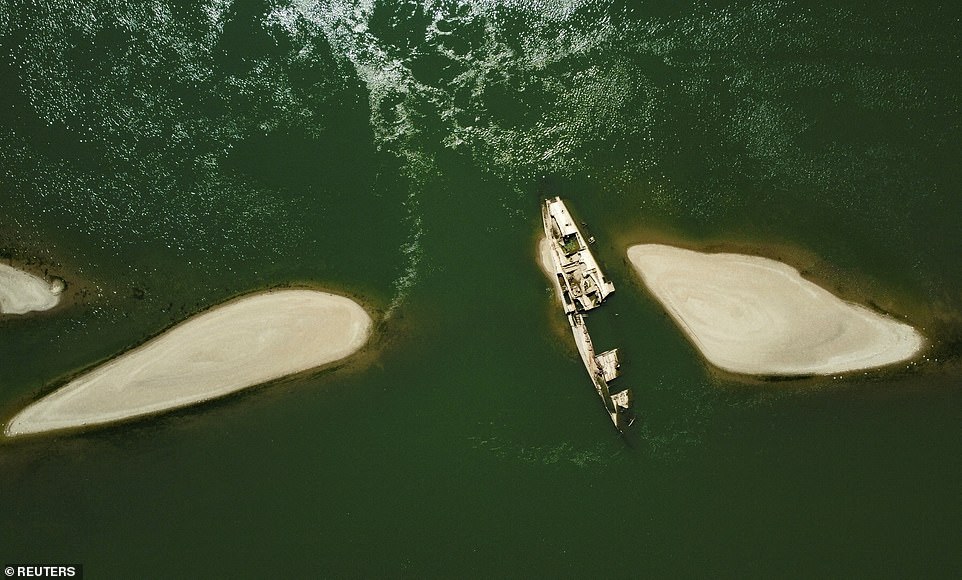 This year’s drought – viewed by scientists as a consequence of global warming – has exposed more than 20 hulks on a stretch of the Danube near Prahovo in eastern Serbia, many of which still contain tons of ammunition and explosives and pose a danger to shipping. ‘The German flotilla has left behind a big ecological disaster that threatens us, people of Prahovo,’ said Velimir Trajilovic, 74, a pensioner from Prahovo who wrote a book about the German ships. 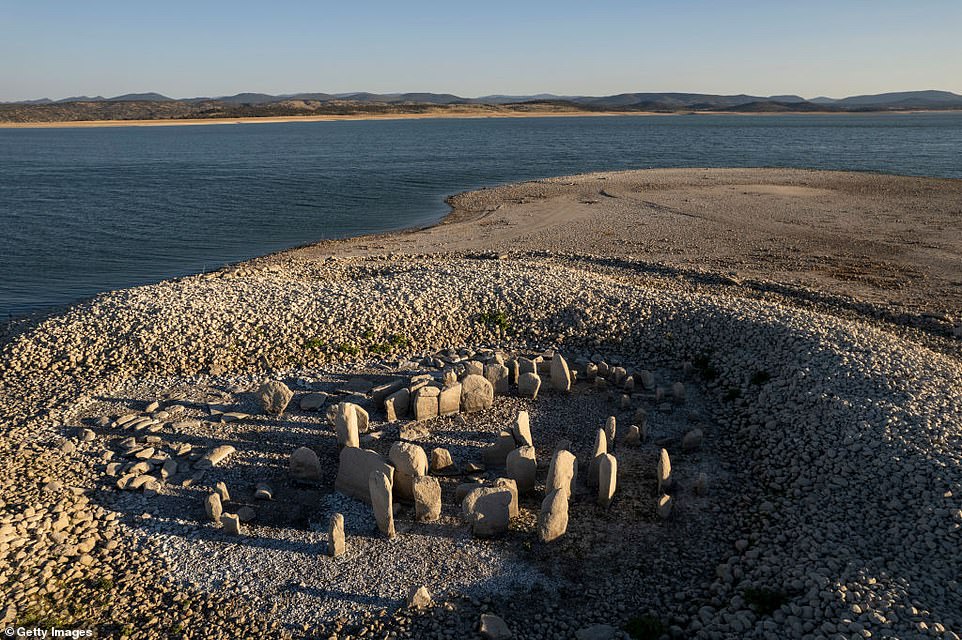 In Spain (pictured), archaeologists have been delighted by the emergence of a prehistoric stone circle dubbed the ‘Spanish Stonehenge’ that is usually covered by the waters of a dam. 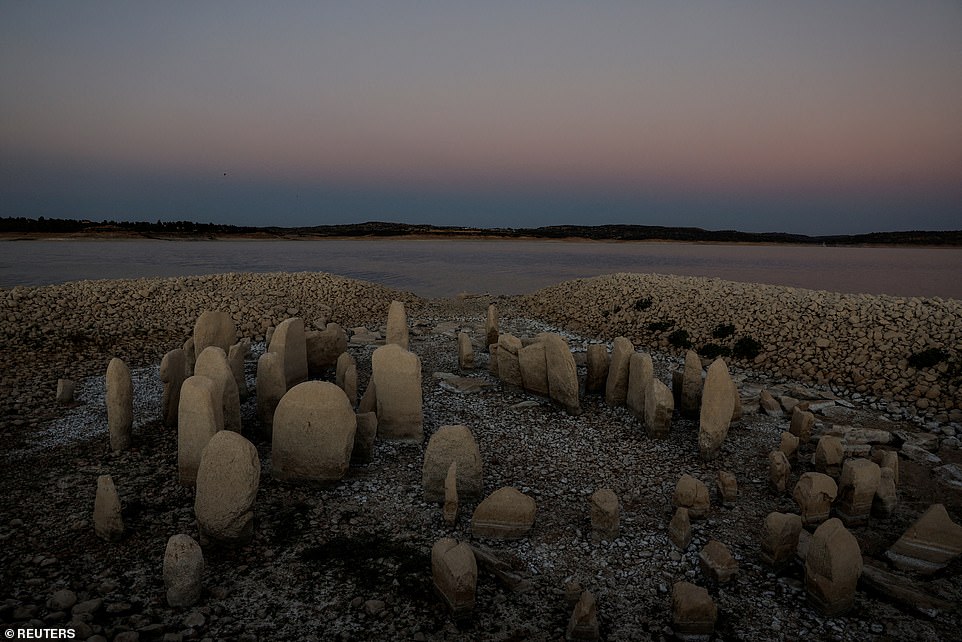 Officially known as the Dolmen of Guadalperal, the stone circle currently sits fully exposed in one corner of the Valdecanas reservoir, in the central province of Caceres, where authorities say the water level has dropped to 28 percent of capacity. 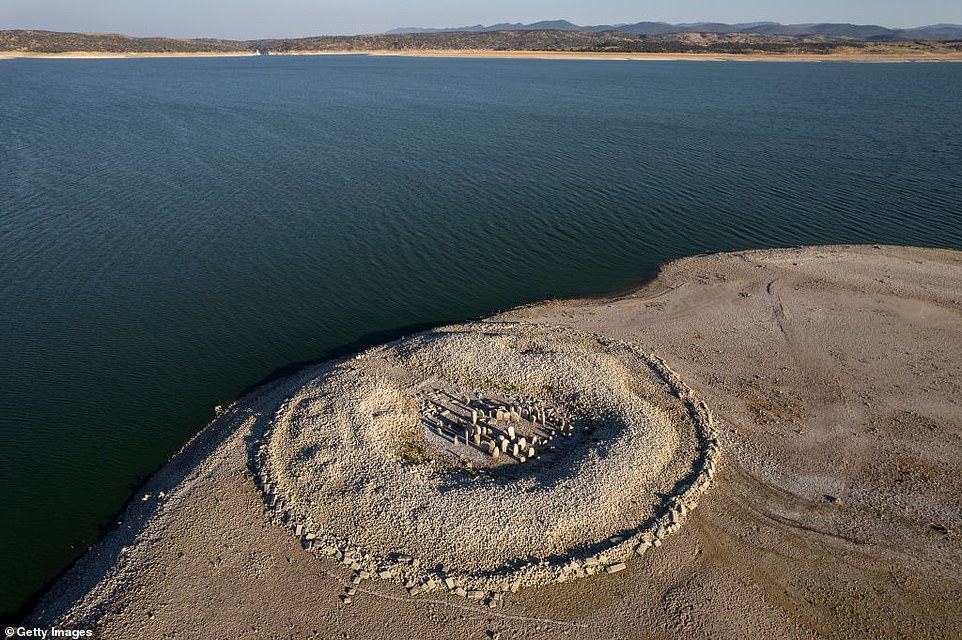 It was discovered by German archaeologist Hugo Obermaier in 1926, but the area was flooded in 1963 in a rural development project under Francisco Franco’s dictatorship. Since then it has only become fully visible four times. 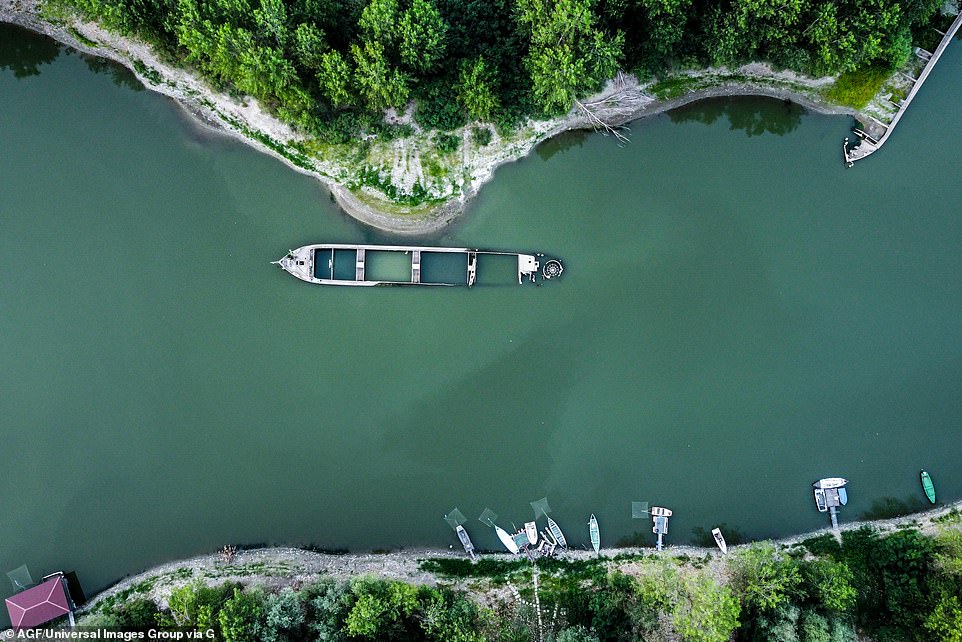 Meanwhile, Italy has declared a state of emergency for areas around the River Po (pictured), and in late July a previously submerged 450kg (992lbs) World War Two bomb was discovered in the low-running waters of the country’s longest river. 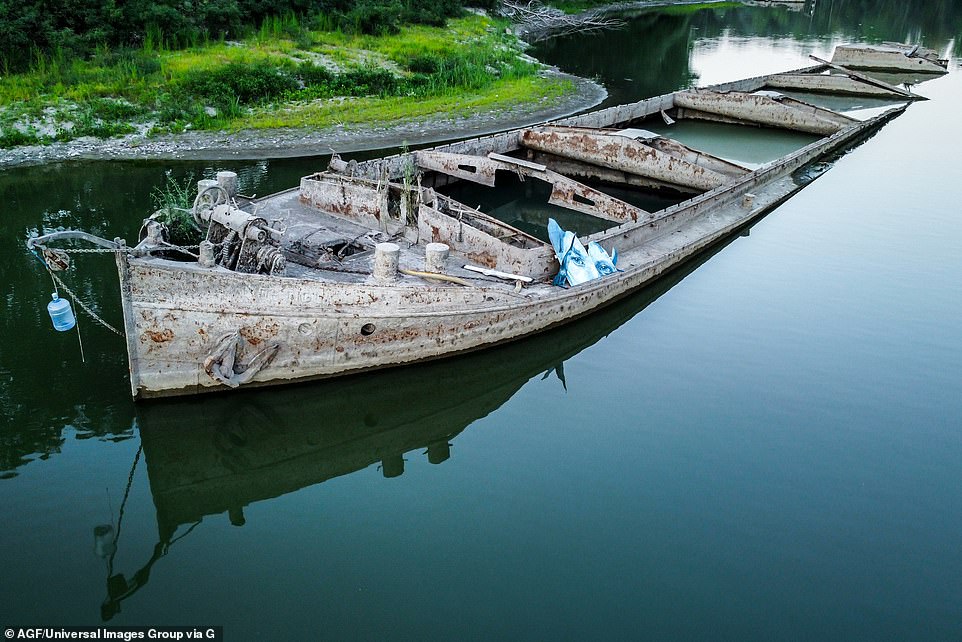 Around 3,000 people living near the northern village of Borgo Virgilio, close to the city of Mantua, were evacuated while military experts defused and carried out a controlled explosion of the U.S.-manufactured device earlier this month. 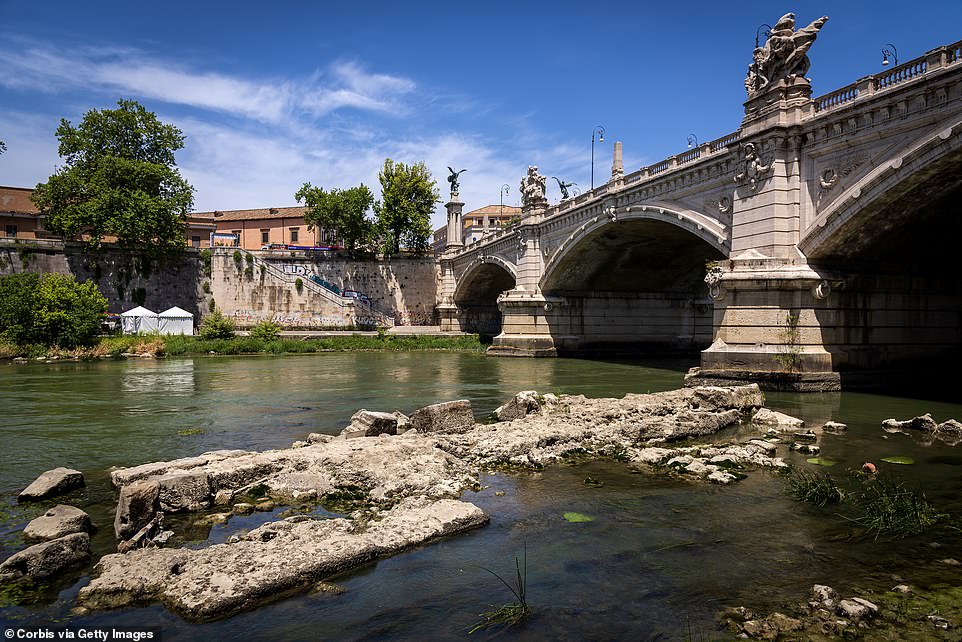 The receding levels of water in the Tiber River in Rome (pictured) has also revealed the remains of the ancient bridge of Nero. The bridge was built under Emperor Nero in the first century so that he could be able to visit his properties on the right bank of the river, including the villa of his mother Agrippina. 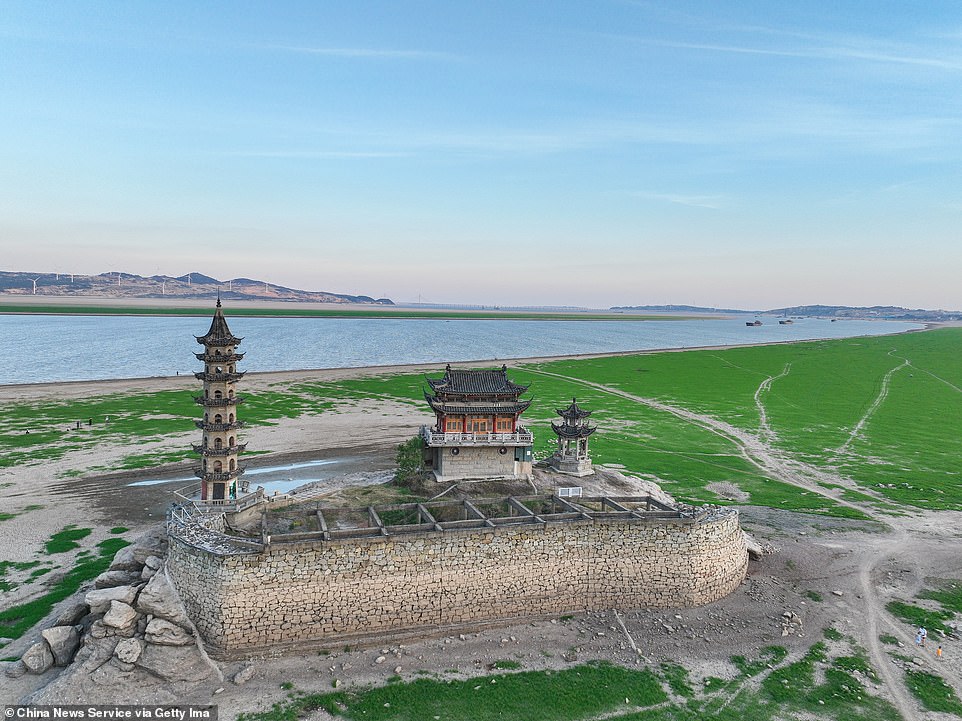 It is not just Europe where rivers and lakes have been baked dry. Plunging water levels of the Yangtze River (pictured) have revealed a submerged island in China’s southwestern city of Chongqing. 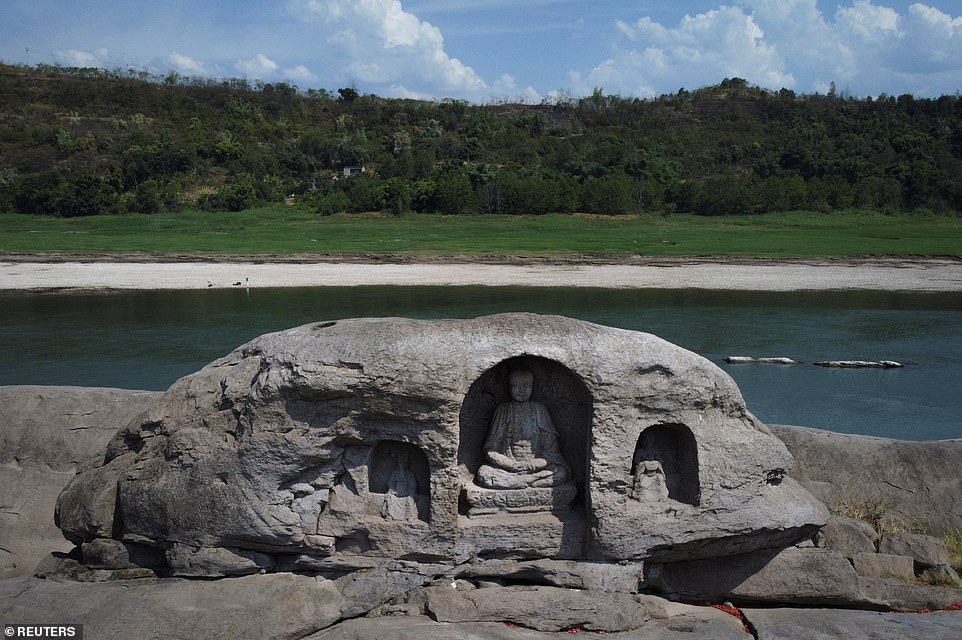 Three Buddhist statues, believed to be 600 years old, were found on the highest part of the island reef called Foyeliang, initially identified as built during the Ming and Qing dynasties. One of the statues depicts a monk sitting on a lotus pedestal. 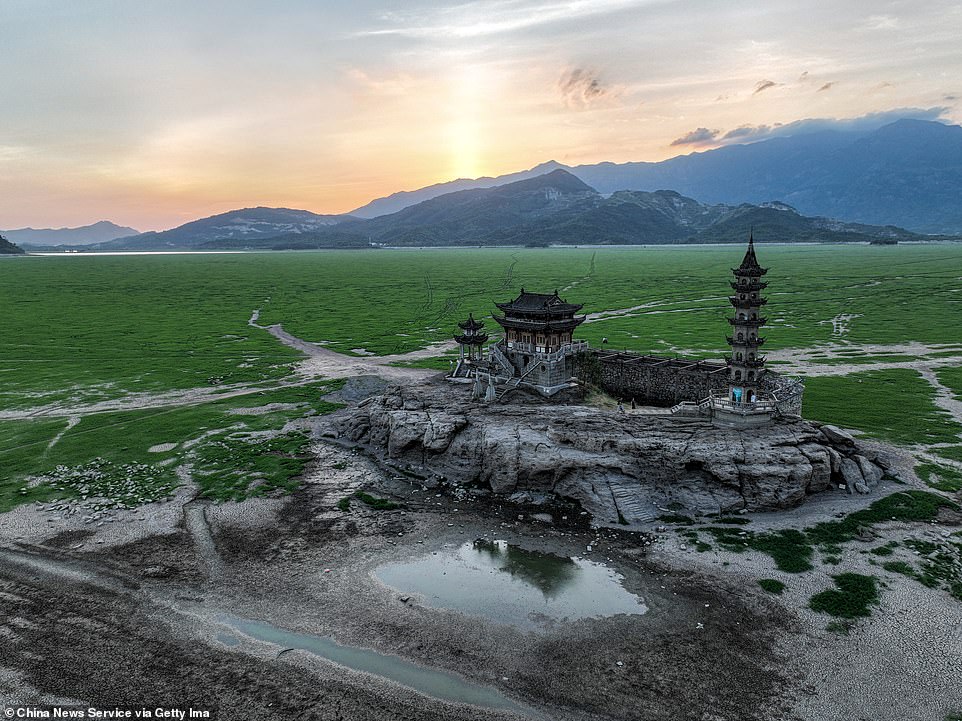 The Yangtze’s water levels have been falling rapidly due to a drought and a heatwave in China’s southwestern region. Rainfall in the Yangtze basin has been around 45 per cent lower than normal since July, and high temperatures are likely to persist for at least another week, official forecasts said. As many as 66 rivers across 34 counties in Chongqing have dried up, state broadcaster CCTV said on Friday. 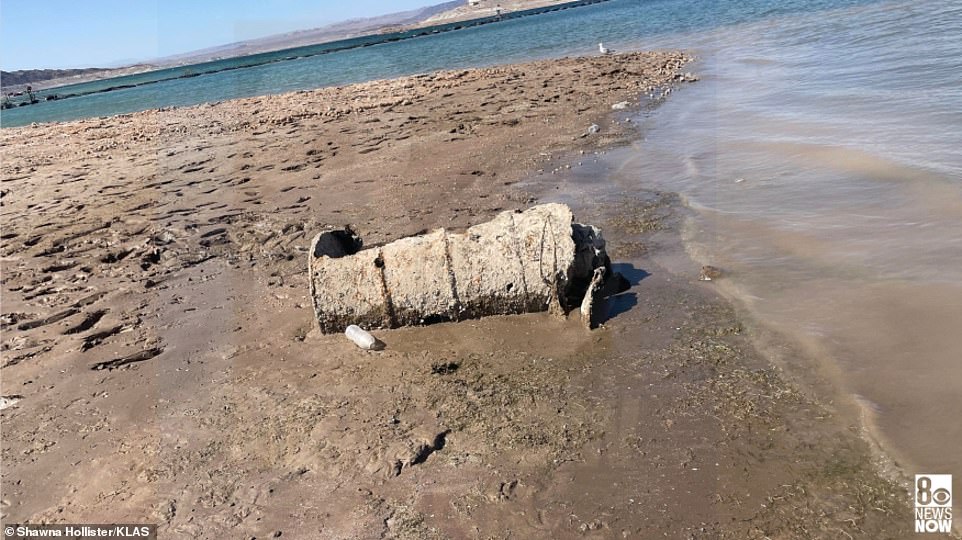 Meanwhile, the drought has led to a series of grim discoveries in the US (pictured). The bodies of five people believed to have been killed by the Mafia have been found at the bottom of the rapidly receding Lake Mead in Las Vegas. The body of a victim who had been shot in the head and stuffed in a barrel before being thrown overboard – a trademark of the hitmen who stalked Las Vegas in the 1970s and 1980s – was found in May. Days after the body in the barrel surfaced, another corpse was reported. 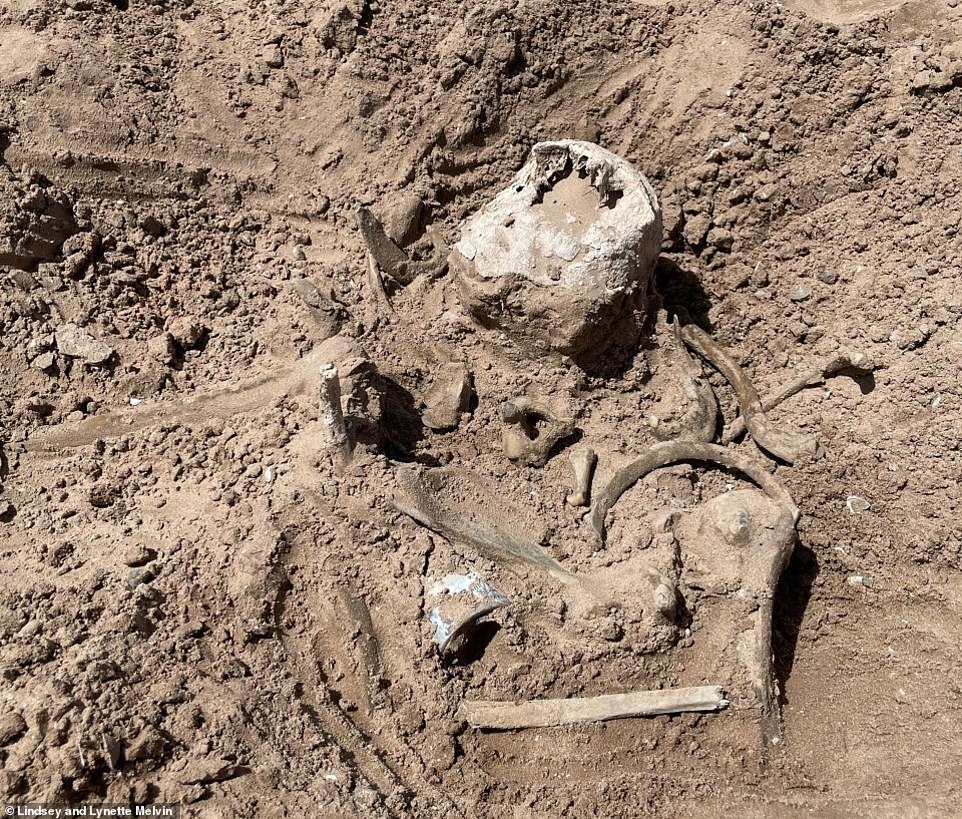 A third was discovered in July. Two more sets of skeletal remains were found this month in the Swim Beach area. US detectives investigating a possible decades-old mob murder said they had found a gun near the spot where the first body was discovered inside a barrel. ‘A firearm has been recovered in the Lake Mead National Recreation Area on August 17, 2022, in close proximity to where one of the human remains were found,’ police in Las Vegas tweeted. They added, however, that it was too early to determine whether it was connected to the current investigation. A police spokesman confirmed the weapon, which was discovered by a journalist, had been located near the spot where the barrel was found. 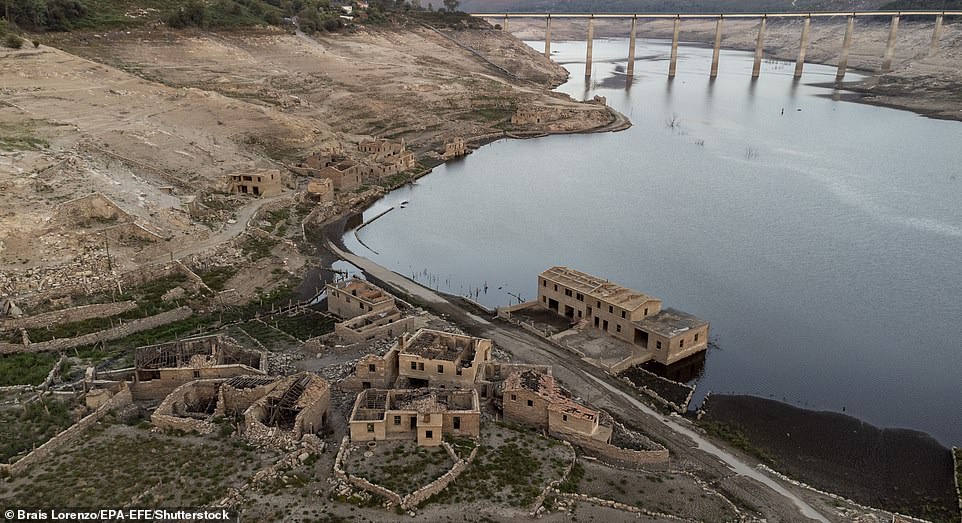 A historic drought gripping much of the western United States is putting a strain on water sources, with reservoirs and lakes falling to record low levels. Lake Mead once sat 1,200 feet (365 meters) above sea level. But after more than two decades of drought, it is rapidly shrinking. Recently, it was at only 1,042 feet – close to its lowest level since the reservoir was filled in the 1930s. Scientists say human-caused climate change, fueled by the unchecked burning of hydrocarbons for energy, is exacerbating the natural drought cycle.

Aaron Rodgers Revealed He Played an NFL Game at Percocet