A royal ship made for the Diamond Jubilee guided a fleet through Windsor on the River Thames today, as part of the third celebration to mark Her Majesty’s 70th Jubilee on the Throne.

The rowing procession was led by Gloriana, The Queen’s Row Barge, built in 2012 and led the Thames Diamond Jubilee Pageant in London.

Costing £1 million, the 88ft royal rowboat was the first to be built in over a century. It was carefully hand-built over four years by 60 craftsmen.

Decorated in gold leaf and ornately carved, with 3ft of gold lions, the boat harks back 200 years to the time when kings and queens traveled the water in lavish style.

The procession included up to 30 different types of craft, including racing boats, 10 touring quads and up to a dozen skiffs.

There was also a Bedford Whaler, an outrigger kayak, and a dragon boat that joined the group.

The procession passed through Windsor to hordes of flag-waved crowds as the Queen spends the day in the castle and is expected to watch the Epsom Derby from television after she was unable to attend in person.

The rowing procession was led by Gloriana, The Queen’s Row Barge, built in 2012 and led the Diamond Jubilee Flotilla in London 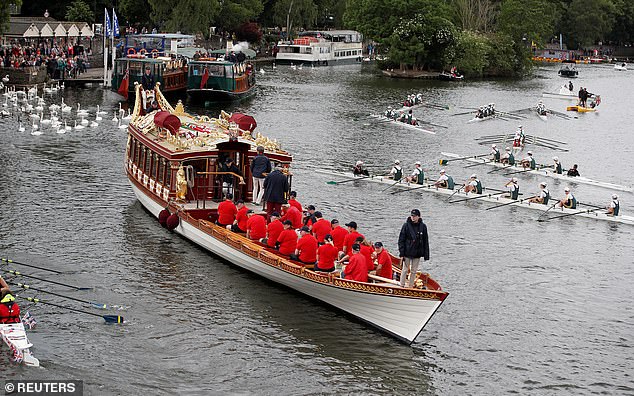 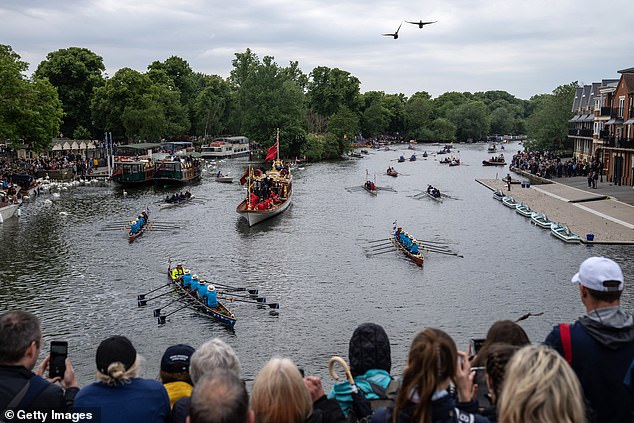 The procession included up to 30 different types of craft including racing boats, 10 touring quads and up to a dozen skiffs 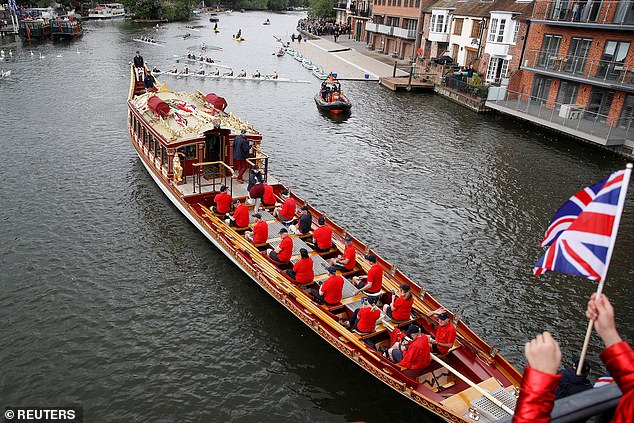 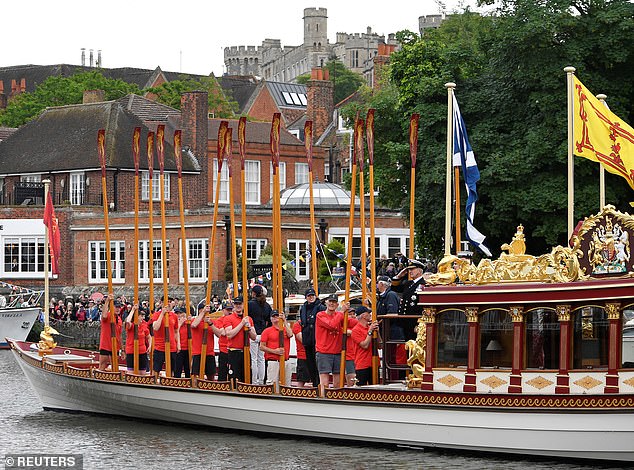 Rowers raise their oars during the festive procession in Windsor 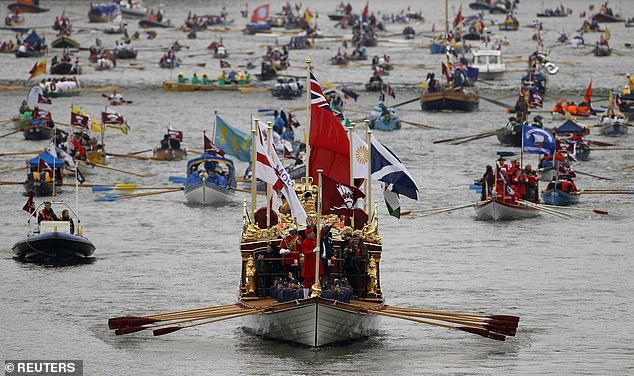 Gloriana, a £2million royal ship from the Queen, leads manpower to Westminster Bridge during Queen Elizabeth’s Diamond Jubilee celebration on the Thames in June 2012

It traveled downstream from Boveney Lock, through Windsor on its journey to Staines.

Representatives from rowing clubs in the area participated, as well as rowers from The Windsor Boys’ School.

The group saluted by raising their oars before the Gloriana continued its journey to Romney Lock.

Aboard the rowboat was Lord Sterling, the Lord Lieutenant of Berkshire, along with other dignitaries and invited guests.

People gathered along the riverbank and on the Windsor and Eton pedestrian bridge to watch the spectacle go by. 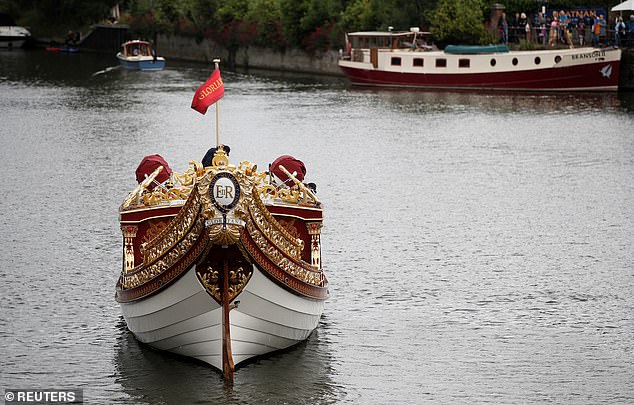 The Gloriana guided rowboats as they traveled downstream from Boveney Lock, through Windsor 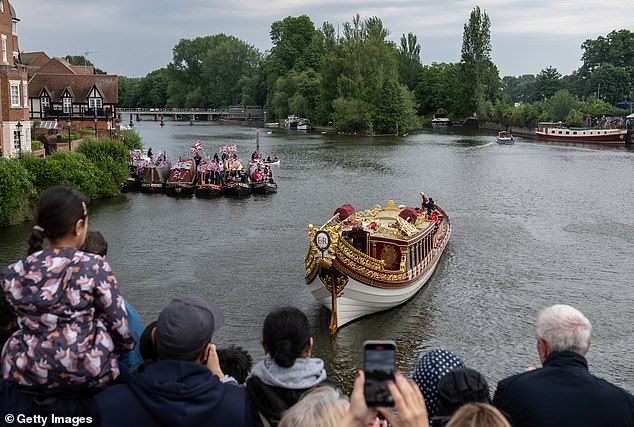 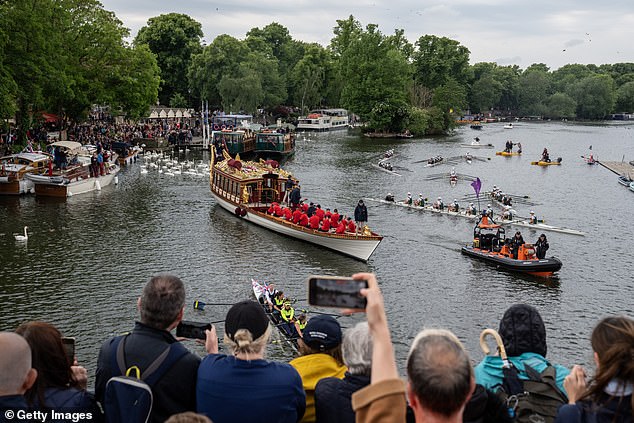 People watched the group make their way through the River Thames, through Windsor Aboard the Gloriana was Lord Sterling, the Lord Lieutenant of Berkshire, along with other dignitaries and invited guests.

@twbs dazzling grand sight of the royal ship Gloriana and a fleet of boats including WBSBC rowing across the Thames to be greeted in Windsor as part of the anniversary celebrations! pic.twitter.com/aYpl6RMNa4

Around noon, ships rang out across the UK for a nationwide salute to the Queen.

The UK Chamber of Shipping organized the simultaneous salute to celebrate Her Majesty’s ties to the maritime world.

The Royal Family has sailed on 83 royal yachts, including HMY Britannia.

All Royal Navy, Merchant Navy and Recreational Boats were invited to participate, regardless of size, MyLondon reported. 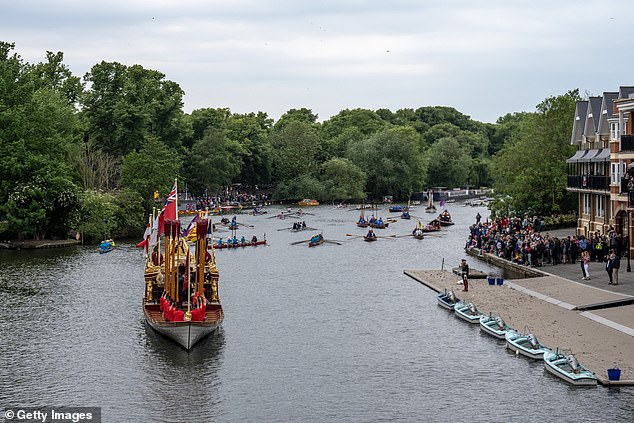 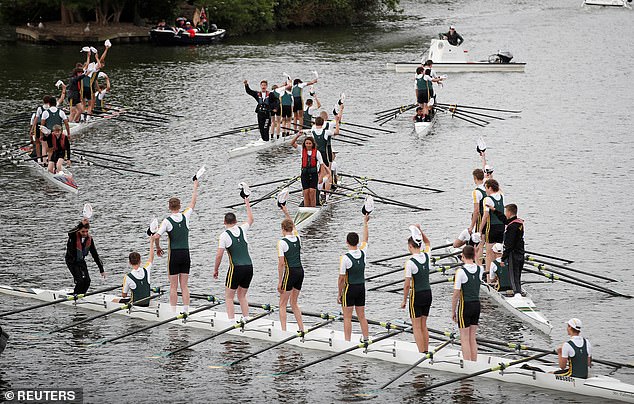 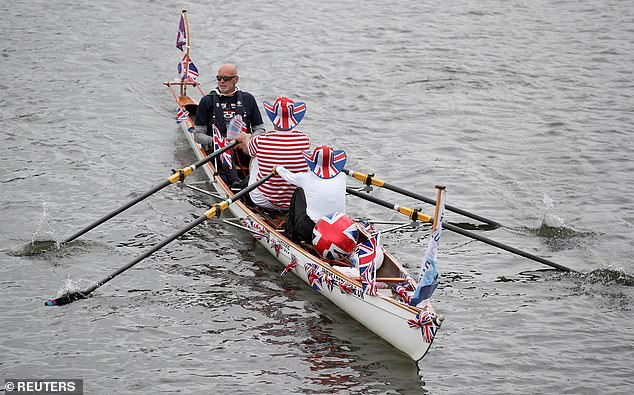 Dressed in Union flags, two rowers are led by a helmsman who directs their route along the river 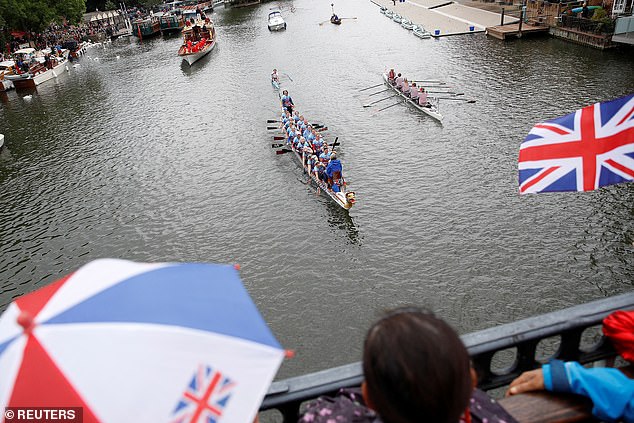 Representatives from rowing clubs in the area participated, along with rowers from The Windsor Boys’ School 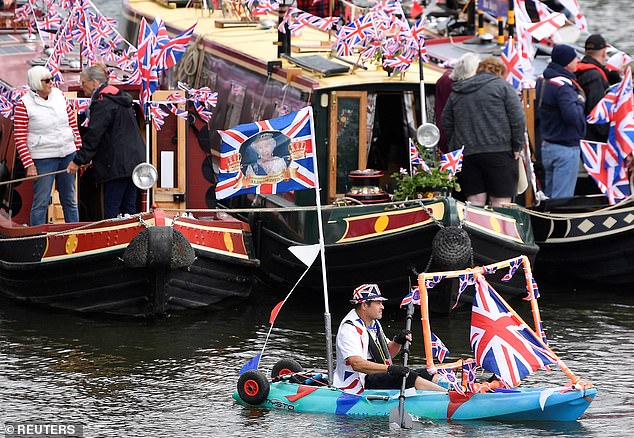 Union flags were everywhere, with bunting on tour boats and a kayak 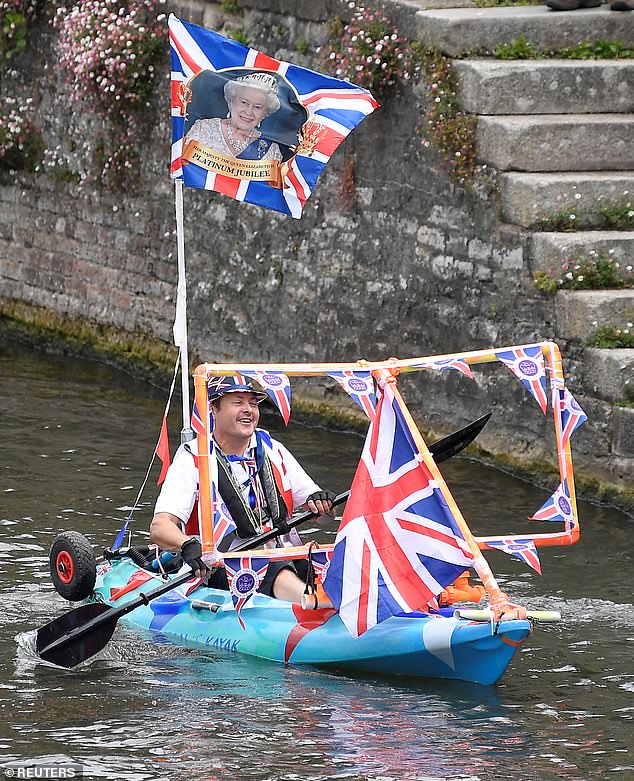 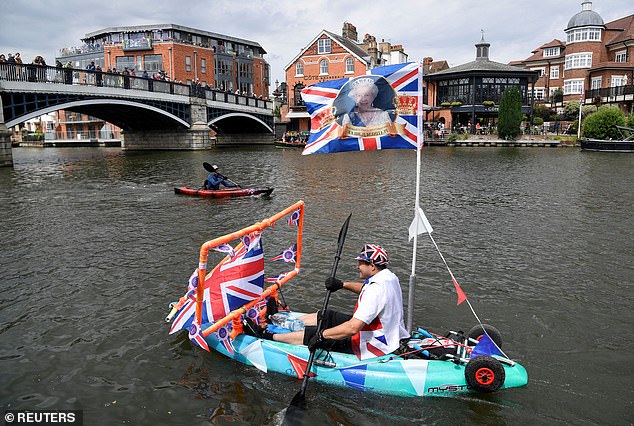 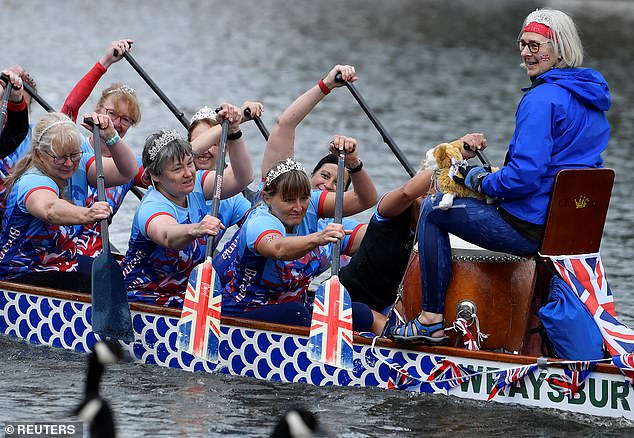 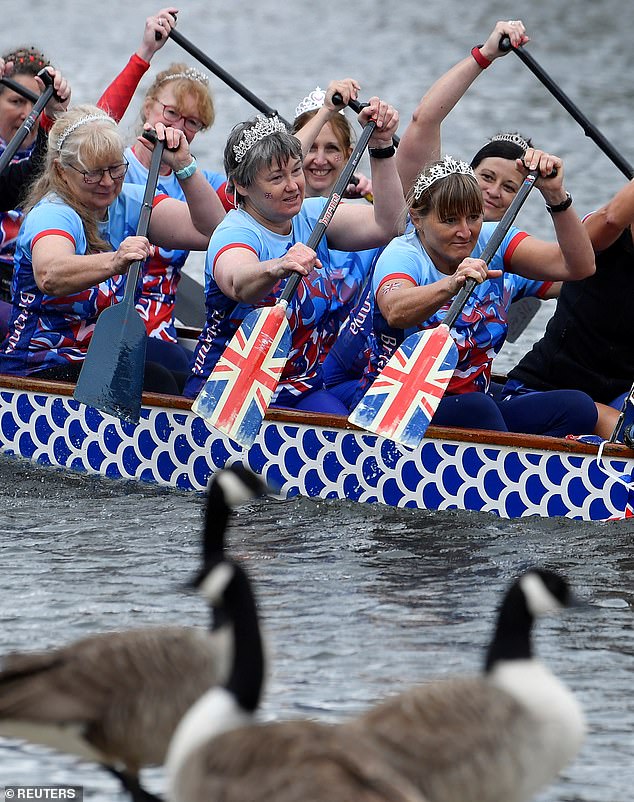 Face-painted union flags, themed belts and tiaras were seen on the dragon boat 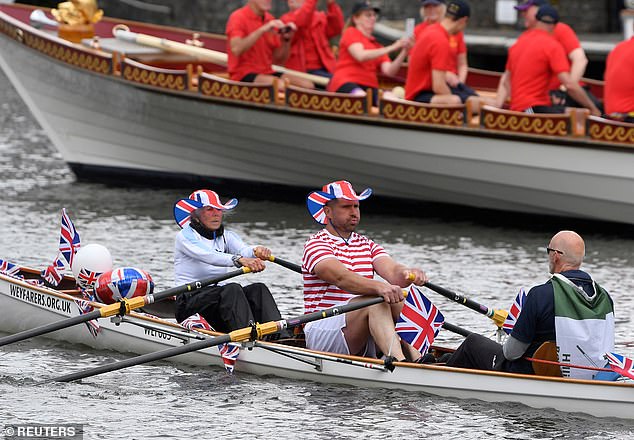 Cowboy hats, balloons and buntings with the Union flag all appeared on the river 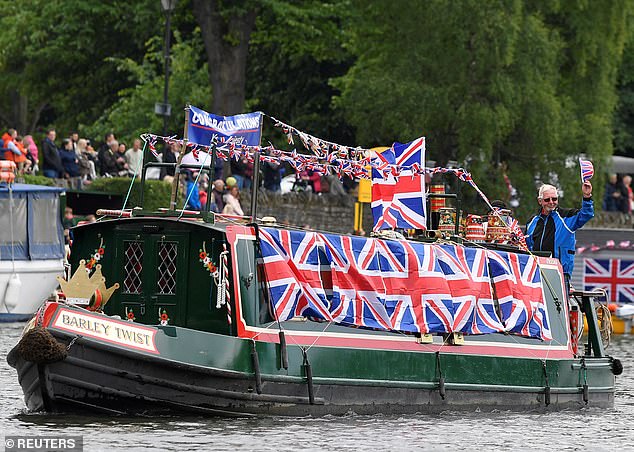 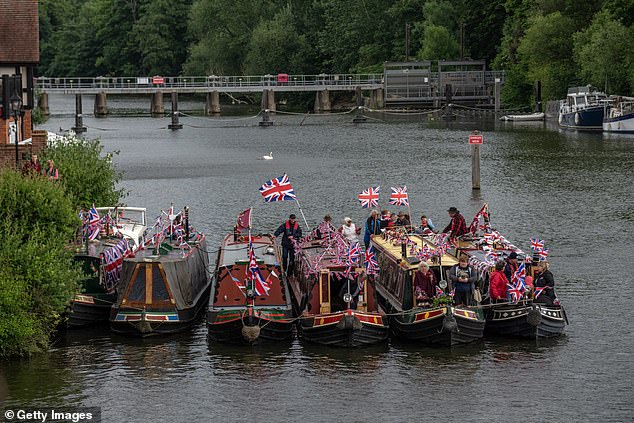 Lisa Wilkinson and Kerri-Anne Kennerley at premiere of Moulin Rouge! The Musical in Sydney