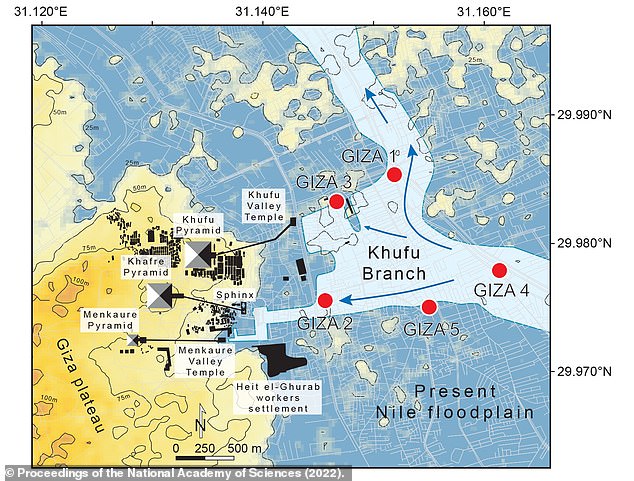 New evidence suggests that a long-lost channel of the Nile, known as the Khufu Branch, flowed close to the site of the Great Pyramid of Giza and was used to transport the 2.3 million stone blocks to build the structures before it dried up around 600 BC.

This discovery is supported by text in a more than 4,000-year-old papyri that describes how boats used the Nile to move blocks from the cliffs opposite Giza and from the Red Sea to build the pyramids.

A team of French researchers, working with others from China and Egypt, analyzed rock layers around the pyramids, allowing them to see the timeline and flow of the Khufu branch to determine if the levels were ever high enough to reach Giza.

Without this arm of the Nile, the researchers say it would have been impossible to build the pyramids 4,000 years ago, as the ancient Egyptians would have had to transport the blocks 500 miles overland — some of which weighed 15 tons. 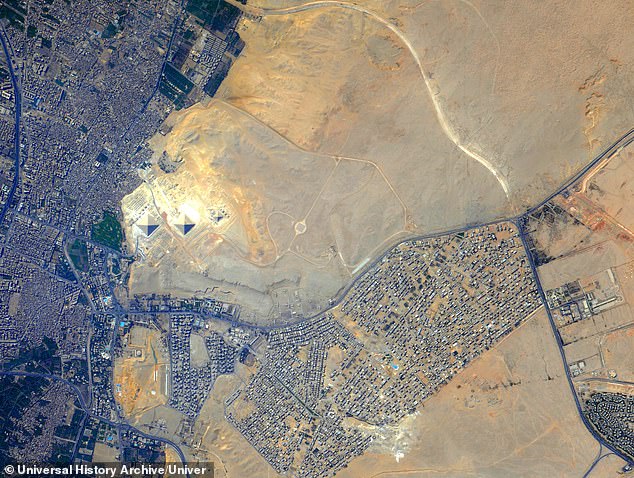 Pictured is a satellite image of the Great Pyramid today. There are no signs of the Nile flowing near it

The Great Pyramid of Giza – the oldest and only surviving of the Seven Wonders of the World – was built by three pharaohs from about 2550 to 2490 BC.

The tallest was built at the behest of Khufu, the one behind the two was built by his son Khafre, and the front pyramids were built under Menkaure’s reign.

But exactly how this was done has been one of the world’s greatest mysteries.

Now archaeologists believe it was done by boats traveling through a now-vanished arm of the Nile.

The team created a picture of how the area around the pyramids, with the now-vanished arm of the Nile flowing to the coast 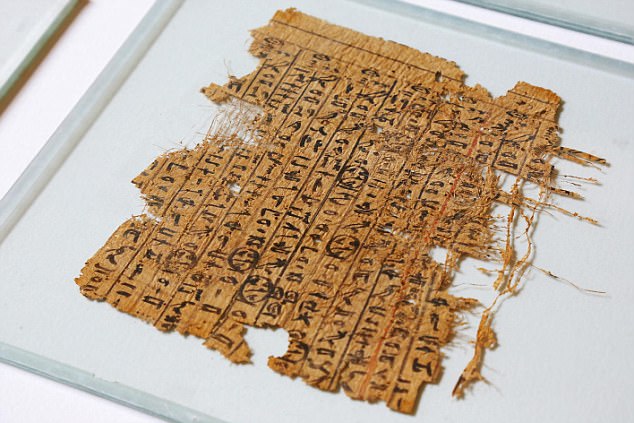 This discovery is supported by text in a more than 4,000-year-old papyri describing how boats used the Nile to move blocks from the cliffs opposite Giza and from the Red Sea to build the pyramids.

Fluvial is a flow-related process in which weathered sediment is picked up by flowing water and moved to new locations, providing clues as to where bodies of water once flowed.

The team also looked at the evidence of swamp plants, semi-aquatic plants growing in soft, wet land and lake edges, and found that the Khufu branch remained at high levels in the area long enough for wildlife to be considered permanent. , Phys.org reports.

The study also found that the harbor used to transport these stones thousands of years ago is more than four miles west of the Nile — much closer than 500 miles overland.

“Our results show that Giza’s aquatic landscapes responded to a gradual solar-induced desiccation of East Africa, with the lowest Nile levels recorded at the end of the dynastic period,” the teams wrote in the study published in PNAS. 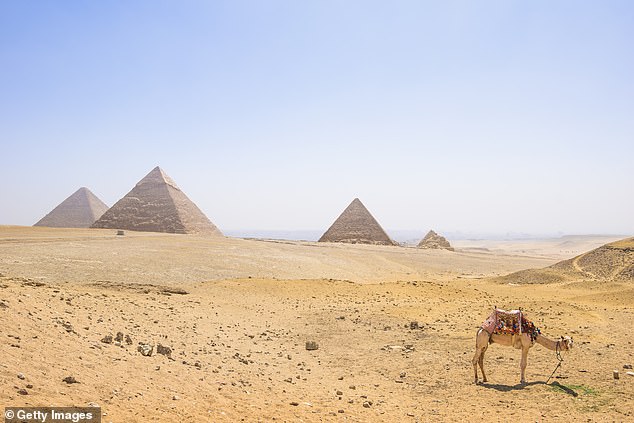 The pyramids comprise 2.3 million blocks made of limestone and granite, averaging about 2.5 tons each. However, it is believed that the stones were cut first and then transported to the site

“The Khufu branch remained during the reigns of Khufu, Khafre and Menkaure, facilitating the transportation of building materials to the pyramid complex of Giza.”

The pyramids comprise 2.3 million blocks made of limestone and granite, averaging about 2.5 tons each.

However, it is believed that the stones were cut first and then transported to the site.

The ancient Greek historian Herodotus, who lived from 484 to 425 BC, wrote that it took 20 years and the labor of 100,000 men to complete the miracle.

However, archaeologists claim that there were about 20,000 men.

The mummified remains and treasures once buried in the pyramids were stolen by grave robbers, and the tops have since crumbled — the gigantic structures are much smaller than when they were first built.

However, millions of people flock to Egypt to feast their eyes on the miracle.

THE MYSTERY OF THE GREAT PYRAMID OF GIZA

For more than 4,500 years, the Egyptian pyramids have hidden their secrets deep within the labyrinth of passageways and chambers that lie within their towering stone structures.

But the long-running argument over whether the Great Pyramid of Giza hides a network of previously undiscovered tunnels behind its stone walls has now been answered.

The researchers confirmed the find by using cosmic particles known as muons to scan the Great Pyramid of Giza.

They used the scans to create maps to reveal the internal structure of the 479-foot (146 m) high pyramid.

Last year thermal scanning identified a major anomaly in the Great Pyramid, the largest and oldest of the pyramids at Giza and one of the Seven Wonders of the World.

Those scans identified three adjacent rocks at the base that registered higher temperatures than others. 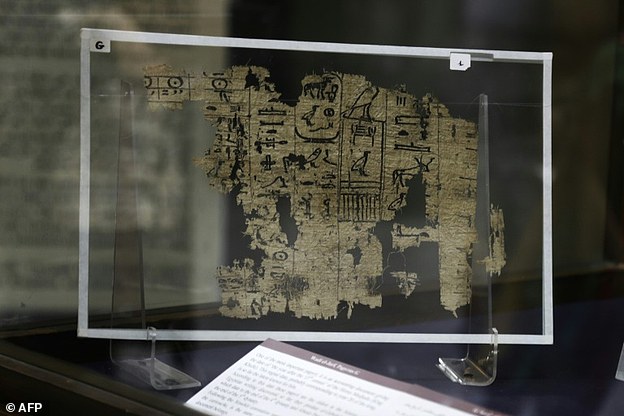 The Egyptian Museum in Cairo on Thursday began displaying the country’s oldest papyrus, which dates back 4,500 years and describes the daily life of the pyramid builders.

This led to theories that they may be hiding a secret room that has yet to be discovered.

A team of experts then set up the ScanPyramid project to use muons, tiny subatomic particles typically produced by cosmic rays produced in atoms on Earth, to peer through the pyramid’s huge stone blocks, some of which can take up to 15 weigh tons.

dr. Hawass has been skeptical about the usefulness of performing such scans in the past.

He recently clashed publicly with British Egyptologists over their theory that a secret burial chamber could be hidden behind the walls of Tutankhamun’s tomb in his pyramid in the Valley of the Kings. 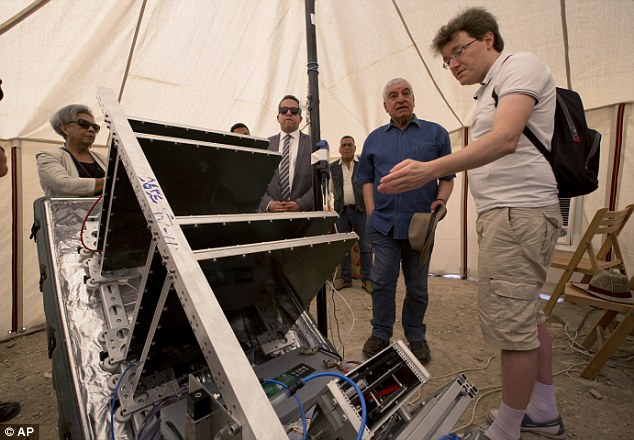