HENRY DEEDES: What a joy to raise a pint to Hare Maj with a crown next to it

At the Bell Inn in Aldworth, West Berkshire, there are some sore heads after last night’s anniversary celebrations. On Thursday afternoon, locals had gathered at this most quintessentially English boozer before heading to the nearby beacon lighting ceremony, which featured a ceremonial bugler, pipe band and, of course, plenty of drinks.

Then it was all back to the Bell to continue the revelry until the time of the casting.

But no sooner had the midday cannon sounded than there was a loud knock on the pub door and a stream of hazy-eyed customers trudged back in to raise another celebratory glass in the Queen’s honour.

But those toasts suddenly took on a particularly regal flavor, when the pub once again served beer in pint glasses bearing the crown symbol, following the government’s decision – revealed in The Mail on Sunday – to revive Imperial readings to mark its platinum anniversary. .

‘However, those toasts suddenly took on a particularly regal taste, as the pub again served beer in pint glasses with the crown symbol’

British pint glasses were first inscribed with the symbol 300 years ago, during the reign of William III, to prevent tax collectors from ripping off their customers by pouring drinks into smaller glasses. There they stayed until 2006, when the EU’s Measuring Instruments Directive came into effect, requiring the addition of the EU-wide CE mark on pint glasses – meaning the Crown mark fell out of use.

The landlord of The Bell, Hugh Macaulay, whose family has owned the pub for 200 years, was delighted to see the stamp back on his pint pots. Tipplers will likely have to wait a few weeks before receiving their Crown-embossed pint. After bossy Brussels quangocrats announced their demise, most of those old glasses would have ended up in the landfill.

Luckily Hugh kept a few in the cellar for a rainy day, making the Bell possibly the first pub in the UK to start serving beer again.

“It’s great,” he said, drinking the first of what would have been dozens of frothy pints yesterday. ‘Our regular customers are also very happy with it. It should never have been removed. It’s traditional.’

Tradition is very strong at the Grade II listed Bell, whose scrubbed tables and massive fireplace have remained unchanged for decades.

There is a sign behind the bar: ‘Freedom is under threat. We must defend it with all our might.’

No wonder Camra (Campaign for Real Ale) named it Britain’s best pub in 2020. This is the kind of place that only serves local ales – and lager is not.

There was a time when Hugh’s late pipe-smoking father, Ian, politely advised anyone who asked for a pint of the fizzy stuff to try another establishment down the street. 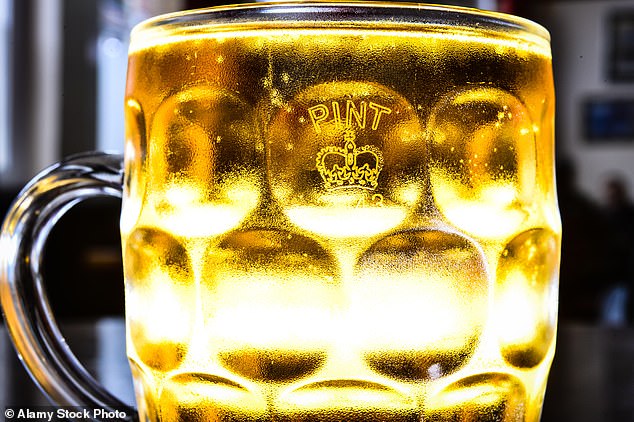 British pint glasses were first inscribed with the symbol 300 years ago, during the reign of William III, to prevent tax collectors from ripping off their customers by serving drinks in smaller glasses

Ian was laid to rest in a field behind the pub, but Hugh’s mother Heather, Bell’s formidable matriarch, still serves behind the bar and is equally excited about the return of the Crown. “Time too!” she harrumps.

“We should be proud to show off our monarchy. The scenes on the Mall yesterday – that was real England. Other countries, of course, have royal families, but none are comparable to ours.’

Perhaps unsurprisingly, Heather always tends to look at every directive that comes out of Brussels with a suspicious eye. “Remember what Winston Churchill said? ‘If Britain has to choose between Europe and the open sea, she must choose the open sea’ Well, he was very right!’ she added.

In the beer garden, retired pilot Clive Large drank from his own pewter tankard kept behind the bar. He too welcomed seeing the Crown stamp on the English glasses.

“Anything traditional is good for me,” he said, taking a long sip of a local brew.

“I don’t know how practical it is to return to Imperial units, but I’m all for it. As someone who flew airplanes, I measure everything in feet.

“If you’d asked me how many feet I was off the ground when I flew, I wouldn’t know what you were talking about!” Disdainful metropolitan sorts will no doubt mock this as sepia-tinged imperial nostalgia.

Well, let them mock I’d say. And let the rest of us be happy to see the Crown again at the pint and raise a glass or three to HM this weekend. Cheers, ma’am!