Holidaymaker who lost luggage after TUI flight to Menorca sees family’s missing belongings in photo of dumped suitcases 1,300 miles away at Manchester Airport

By Joe Davies for Mailonline

A holidaymaker who lost her luggage on a flight to Spain eventually found her family’s missing belongings 1,300 miles away in Manchester.

Laura Simpson, 35, took a TUI flight to Menorca during the travel chaos that has left thousands of Britons stranded after last minute cancellations.

But when Mrs Simpson from Warrington, Cheshire, arrived on the Spanish island, her family’s luggage – including a vital asthma inhaler – was nowhere to be seen.

Her original direct flight from Manchester Airport to Menorca on May 27 was diverted via Ibiza and the seven suitcases did not arrive at their intended destination.

The nine family members were without clothes, toiletries or medicines for the entire six-day holiday – which was rescheduled three times because of Covid.

Two days after the trip, she saw the suitcases in a video on social media – but they were back at Manchester Airport.

Laura Simpson, 35, from Warrington, Cheshire, who lost her luggage on a flight to Spain, finally found her family’s missing belongings 1,300 miles away in Manchester

Mrs. Simpson told the Manchester Evening News: ‘The flight left about an hour and a half late. When we got to Ibiza everyone got off and the 25 of us going to Menorca stayed on board.

“It was everywhere. By this point we had already been waiting for a hot plane for two hours. We finally arrived in Menorca and waited an hour for our luggage and then someone came out and said it hadn’t arrived at the airport.’

Before seeing the bags in the video, she had tried to call TUI every day, but received no updates on the location of the bags. 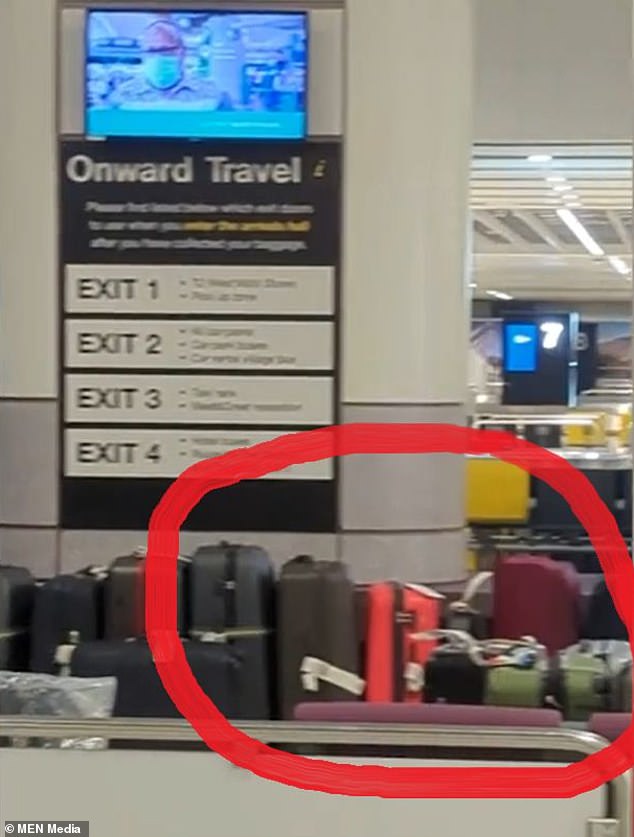 Two days after the trip, she saw the suitcases in a video on social media (pictured) – but they were back at Manchester Airport

She said the company gave her €25 (£21) a day to get by without her belongings, but couldn’t

After seeing the bags in the video, she informed the company but has still “heard nothing from them,” she claims.

A TUI spokesperson said: ‘We are aware that some customers have been affected by baggage delays at Manchester Airport and we would like to thank customers for their patience and understanding during this exceptionally busy time.

“We work closely with airport staff, baggage handlers and our teams in the resort to ensure that customers receive their baggage as quickly as possible.

Ms Simpson’s travel pains come amid a storm of travel chaos that is hitting British holidaymakers across the country.

Britons returning from holiday have complained of ‘three hours delay’ in collecting luggage at UK airports and ‘abandoned’ luggage left in piles at Heathrow this morning.

TUI customers are outraged at the ‘terrible service’ after their flights landed at Manchester Airport at 3am this morning, forcing families to have their children sleep on the floor as the crisis continues to disrupt.

The reason for the ongoing chaos is due to a personnel crisis in aviation, that is, passengers are advised to arrive much earlier than usual for their flights as they face long queues.

While many airline companies are struggling to re-hire staff after many have been laid off during the pandemic, the high absenteeism rate of those still employed is also having an impact.

AT A GLANCE: What about travel today during the Queen’s Platinum Jubilee celebrations?

Passengers have also reported ‘abandoned luggage’ left in ‘piles’ when collecting luggage, as Britons report delays of around three hours this morning.

Tui tweeted earlier today: “Manchester airport has suspended the day before baggage drop for the following week. We recommend arriving at the airport 3 hours before the flight time for short-haul destinations and 4 hours before for long-haul flights, as the check-in/luggage desks open then.

Passengers have reported delays of up to two hours in arrivals and departures this morning.

Tui passenger Craig Jones tweeted: ‘At Bristol Airport awaiting a delayed CUN flight – we were told we could get vouchers. Many people are waiting at the help desk. No show from TUI rep. Very bad show!’

Queues were depicted at the airport at the check-in desk and security.

Passenger Jason Stratford tweeted: ‘Birmingham Airport is a complete joke. Passengers were on the plane at 4am this morning as there are no stairs – and staff don’t start until 5am. Over an hour waiting for luggage.’

Terminal 2 at Heathrow is experiencing long queues at their check-in desk this morning.

The airport tweeted this morning: ‘The queues at the airport have increased. We have no information on how long the queues can be at any given time. To save time, make sure you follow airline guidelines for the fastest check-in experience.”

Gatwick Airport: UP TO ONE HOUR DELAY

Passengers have reported delays of at least an hour before departure, while passengers arriving have said there are “exceptionally long queues” when collecting luggage.

Britons returning from holiday have complained of ‘three hours delay’ in luggage collection at UK airports and ‘abandoned’ luggage ‘left in piles’ at Heathrow this morning – travelers have also said ‘their luggage has been diverted to another airport ‘, while others have reported that their luggage has gone missing altogether.