Home comfort: the smell of roast meat and fresh linen are the most important things that make your home homely 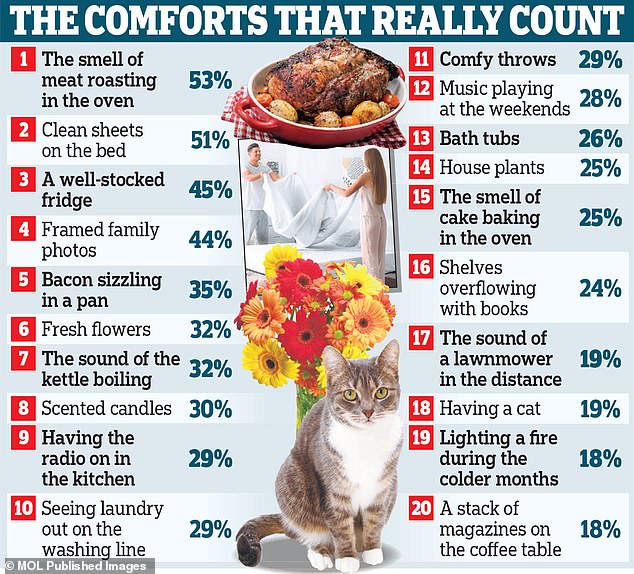 Comfort for creatures: The smell of roasted meat and the smell of fresh linen are the most important things that make your home feel like home, research shows

The smell of meat being roasted in the oven and fresh linens on the bed are among the most important things that make a house a home, according to a study.

It reveals a myriad of things that make ordinary brick and mortar a homely place, with the smell of meat being roasted in the oven (53 percent).

Fresh linen on beds (51 percent) and a well-stocked refrigerator (45 percent) were also at the top of the list.

According to the 1,500 adults surveyed, framed family snaps (44 percent), the sound of a boiling kettle (32 percent), scented candles (30 percent) and comfy throws (29 percent) are also some of the most comforting things in a home.

A study reveals a lot of things that make ordinary bricks and mortar feel like home, with the smell of meat being roasted in the oven (53 percent)

But it’s not just what we find in the house that counts.

Freshly cut flowers (32 percent) and even the sound of a lawn mower in the distance (19 percent) were found to help people feel happiest at home.

Other favorite features were music at the weekend (28 percent), the smell of pastries in the oven (25 percent) and shelves full of books (24 percent).

And the UK is clearly a nation of cat lovers, as the research reveals that another way to make your house a home is by having a feline friend (19 per cent).

The survey by kitchen towel brand Plenty also found that 70 percent agree that a home should be relaxed and occupied – not overly clean and tidy.

So it’s no surprise that nearly half of us (48 percent) are tired of seeing social media images of pristine, “Insta-perfect” clutter-free homes.

Psychologist Emma Kenny (pictured), who appears on ITV’s This Morning, said: ‘It is reassuring that 70 per cent of people who took part in this survey think a home should be ‘relaxed and occupied’.

And 42 percent admit that while their home may not always look clean and tidy, they wouldn’t want it any other way.

Leanne McLeod, of Plenty, said: ‘Our research shows that Brits really prefer a relaxed space. With mess come irreplaceable memories that fill a home with love.’

Psychologist Emma Kenny, who appears on ITV’s This Morning, said: ‘We are led to believe that we should strive for the impossible standards we see on Instagram.

But it’s reassuring that 70 percent of the people who took part in this survey think a home should be ‘relaxed and inhabited’.’