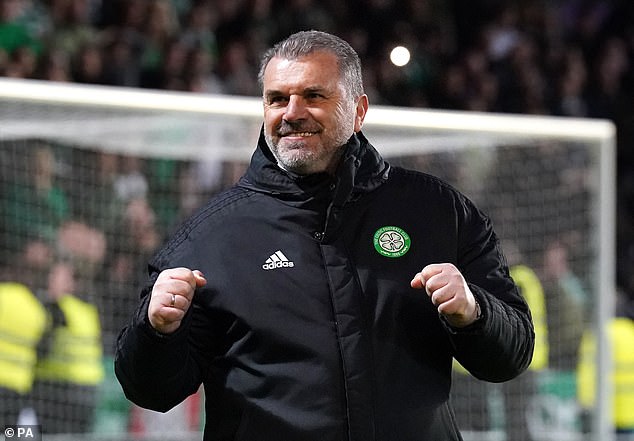 You could argue that Celtic have won more important titles in their history. Others have been claimed in a more dramatic way. But you’d do well to remember one as improbable as this one.

After six league games, Ange Postecoglou’s team had lost three times. A fanbase that had suffered endlessly last season when ten-in-a-row went up in smoke prepared for a level of pain that could have brought them to a breaking point.

The prospect of putting together a 31-game undefeated league game when they left Livingston on September 19 was not as far off as fantasy.

Whatever small signs of promise were to be discovered in those early matches, there wasn’t enough to build a convincing argument that it would all come together so spectacularly and so quickly under the Australian. Coupled with the Rangers’ staccato form after the winter break, Celtic’s remarkable consistency took them first within touching distance of their big rivals and then past them. 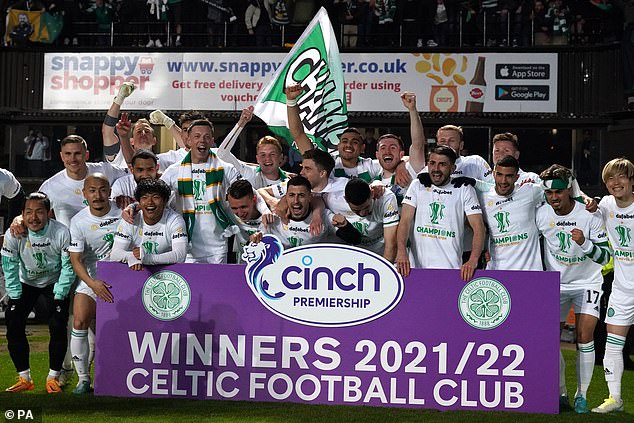 From the moment they finally made it to the top of the table by beating the then champions 3-0 on Feb. 2, they haven’t looked back.

They had one hand on the trophy when they came from behind to win at Ibrox early last month, another four figures when Rangers failed to win at Celtic Park four weeks later and will complete the formalities by finally lifting the trophy to the sky after Motherwell’s visit on Saturday.

Official confirmation given last night; Celtic are champions again and rightly so.

You could have put your price on that event when the hastily gathered side of Postecoglou lost to Hearts on day one. It feels like that game is now part of another season.

The side that day consisted of Scott Bain, Ismaila Soro, Ryan Christie and Odsonne Edouard. Carl Starfelt was everywhere. Kyogo Furuhashi made an impressive debut from the bench. It had all the hallmarks of a long, tough season. 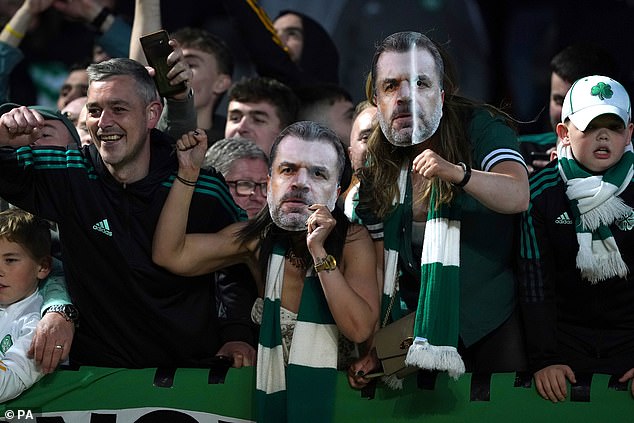 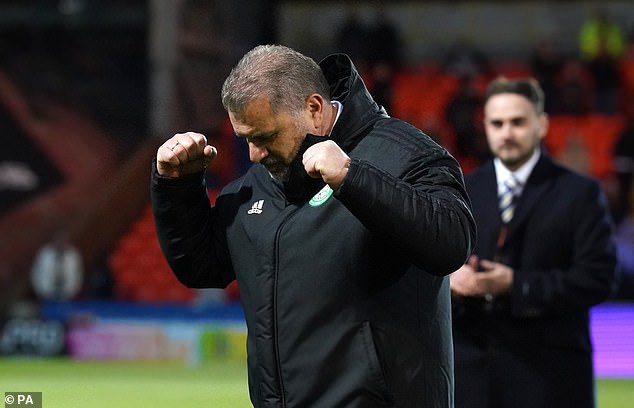 Postecoglou said ‘nobody gave us much of a chance’ when he joined the Hoops, admitting he was lost for words for the first time in his time with the lace after their triumph

The new recruits Postecoglou so apparently needed arrived and immediately gave a quality drip; Joe Hart, Jota, Josip Juranovic and Cameron Carter-Vickers were late on the scene, but still arrived with enough time to turn the stricken tanker around.

All three played in the match leading up to the epic run – ironically a home draw with Dundee United – but it would be the win at Pittodrie that changed the story next time. Incredibly, it was Celtic’s first road league win in nine months.

They drew just one of 11 league games going forward, with the momentum taking them to victory over Hibs in the Premier Sports Cup final.

Furuhashi had returned from injury to fire the double, which would lift the first silverware of the season, but would again be sidelined with a serious hamstring injury when Postecoglou’s men won at St Johnstone on Boxing Day.

The Japanese would not be seen again until he came off the bench on April 7 during a 7-0 hiding by the Perth men.

The loss of their talisman should have put an end to Celtic’s title challenge. Instead, in his absence, they took 34 points out of a possible 36.

If their recruiting last summer had necessarily been extensive and inevitably far from perfect, they had repeatedly hit the bull’s eye in January. 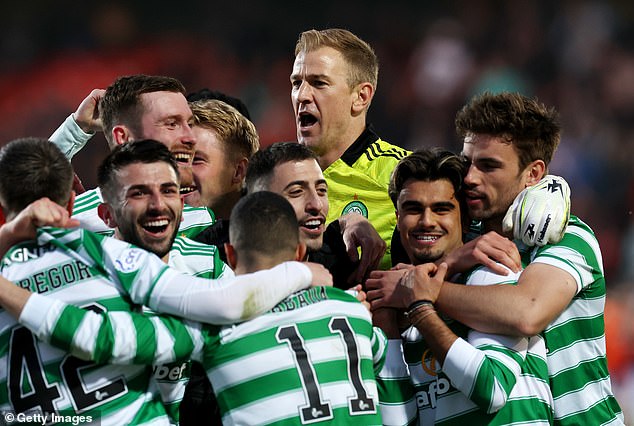 Injury has limited the impact of the latter. But Maeda’s speed and diligence were immediately noticeable from his first performance. Hatate has been tired lately but endeared himself to the fans with his vision and eye for goal.

His double knocked Rangers to the sword before halftime in February and turned the season on its head. Matt O’Reilly signed later that month, the $2.6 million MK Dons received amounted to daylight robbery. His composure and cunning took a rapidly improving side to new heights and provided respite for the born-again Tom Rogic.

Giorgos Giakoumakis’ season reflects that on his part. The early struggles and frustrations gave way to an avalanche of goals and wins. This year there have been fourteen of his fifteen strikes.

When he declared Celtic better than Rangers in all divisions in February, his comments were seen by some as brave, by others premature and by Ryan Jack as ‘disrespectful’. No one could now argue that they were incorrect.

Postecoglou had demanded that his side burst through the tape on the winning line. They fell through it earlier last night.

The matter could and should have been resolved before half-time, but plenty of opportunities came and went. Tony Ralston fired over, James Forrest was denied by a defensive block and couldn’t turn in Giakoumakis’ cross, Hatate ignored two good openings.

Just as United dreamed of securing the point that would secure a return to Europe, Ralston’s fine footwork ensured Giakoumakis. A thumping header from six yards was the signal for the party to begin.

How Benjamin Siegrist Jota denied the second with outstretched arm, the winger will never know.

The significance of that rescue soon became apparent. The Celtic defence, pulling back on Dylan Levitt, invited the Welshman to try his luck from 25 yards. What a stunning attack he found to drag his team level. 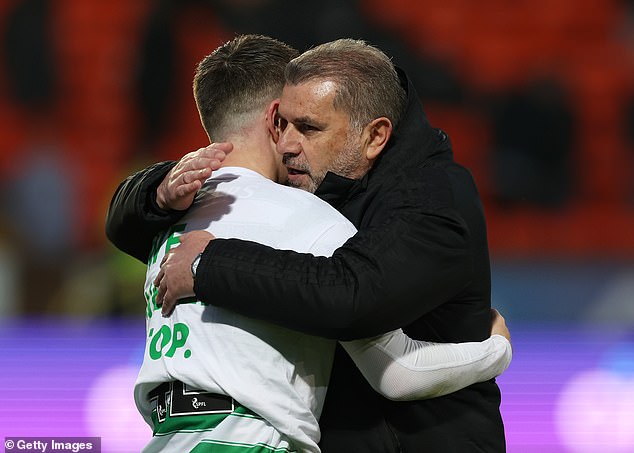 Callum McGregor and Postecoglou hug after title officially becomes theirs

It made for a strangely nervous ending for Celtic. The normally reliable Hart chattered at crosses. It can happen to the best of them when the end is so close.

Ryan Edwards may have delayed the inevitable in stoppage time, but his header went wide. A spot in the Conference League qualifier is nevertheless United’s prize.

Despite a patchy display, the final whistle sparked unbridled joy from the visiting fans. Skipper Callum McGregor slammed into the air before leading his players in a merry dance as the smoke from fireworks filled the air.

Since this was the location where the title was relinquished a year ago, there was a certain symmetry to the whole.

Postecoglou stepped back and drank in the joyous scene as his name echoed through the stadium. No doubt the man who arrived on these shores last June as a relative unknown will have recalled briefly the days when they queued to question the wisdom of his appointment. Wherever football takes him, no one will make that mistake again.