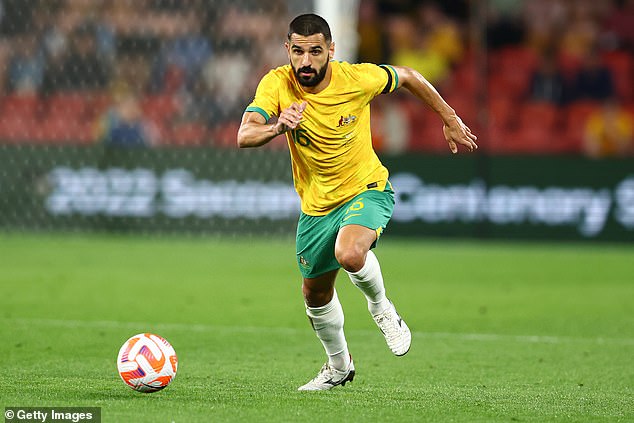 From the rough streets of Melbourne to potential World Cup glory in Qatar: how proud Muslim Aziz Behich went from an A-League outcast to a Socceroos regular

Growing up in the suburbs of Melbourne, Aziz Behich dared to dream bigger than most.

The left-back wanted to play for the Socceroos – and has done so, making him a reliable and consistent figure for coach Graham Arnold over the years.

He is widely tipped to be on a plane to Qatar to play at the World Cup in November – not bad for a man who once stood on the sidelines of Melbourne Victory’s A-League squad and played as a striker.

After cutting his state-level football teeth with Green Gully, the proud Muslim man finally got an elite-level shot in 2009.

His teammates at the time included A-League legends Kevin Muscat and Archie Thompson.

But Behich really arrived when he reached an agreement with Melbourne Heart – now Melbourne City – the following year.

Aziz Behich wanted to play for the Socceroos as a youngster – and has done so, and has become a trusted figure for coach Graham Arnold in recent years (pictured, recently in action against New Zealand) 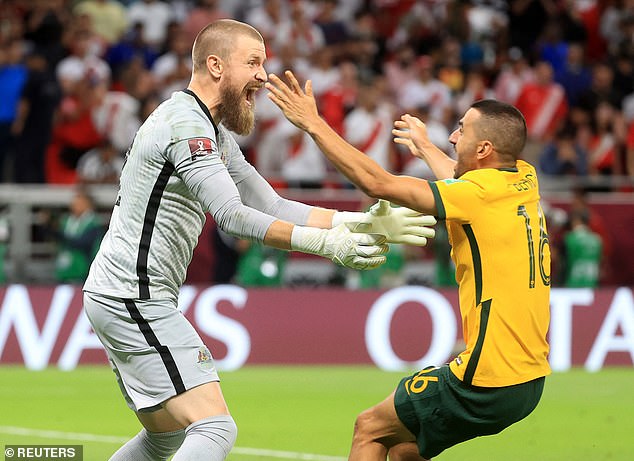 Bearing his heart on his sleeve, Behich is Australia’s first-choice left-back (pictured, with Andrew Redmayne after beating Peru on penalties in June)

With Turkish parents, securing a move to Bursaspor to play in the Süper Lig was a proud family moment for the Behich family.

“Two years before I went there, they had won the league. They had just played in the (UEFA) Champions League. They were one of the best clubs in the world.’

Fast forward to 2022 and Behich is the Socceroos’ left-back first-choice, and if he gets the nod over the likes of Joel King and Jason Davidson, he’s expected to start in the Australian World Cup opener against France on November 23.

Over the years, many of his club teammates have asked him why he chose Australia over Turkey for international football, especially when you consider his heritage.

But there was never any doubt as to who Behich – currently on the books of Scotland’s Premier League outfit Dundee United – would play for. 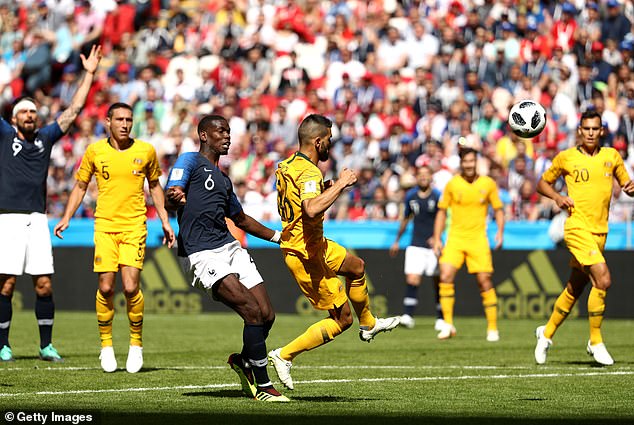 Behich has already played at one World Cup (pictured, marking France’s Paul Pogba in 2018 in Russia)

‘I’ve always wanted to play for Australia; I grew up there, I started playing football there. They have given my family a life,” he told the ABC.

“Even my father said, ‘The best decision you made was to play for Australia.’

“Australia has given us a chance. I’ve always felt I had to give something back.’

His father Yasar himself was a famous player in his heyday in Northern Cyprus – and Behich was desperate to emulate his hero as a youngster.

Considering he is set to play in his second World Cup – after also playing in Russia four years ago – it’s safe to say he made his father proud.

Behich often uses the word grateful in interviews when talking about his career, donning the Socceroos shirt over 50 times – not bad for a guy who had ambitious dreams as he honed his game as a kid in the suburbs of Essendon and Broadmeadows.