Dozens of people gathered in Times Square at 5 a.m. Monday to watch the run-up to Her Majesty’s service across the pond — despite the five-hour time difference.

Many American publications had a live stream of the funeral in which the Royals gathered to pay their respects to the Queen for the last time.

President Joe Biden and his wife Jill attended the service to pay their respects, with many congregation members arriving up to three hours early.

Thousands lined the streets to pay their respects, while millions around the world tuned in to witness Her Majesty’s final journey.

The Washington Post led coverage from Westminster Abbey for the procession, while the New York Post and Los Angeles Times also had footage of the event.

CNN, ABC, Fox News and NBC have all canceled their usual coverage to follow the procession the entire way, with royal commentators leading up to the occasion.

CNN was crowned the top of U.S. coverage by DailyMail commentator Jaci Stephens when the Queen’s death was announced — marking her funeral with constant live coverage 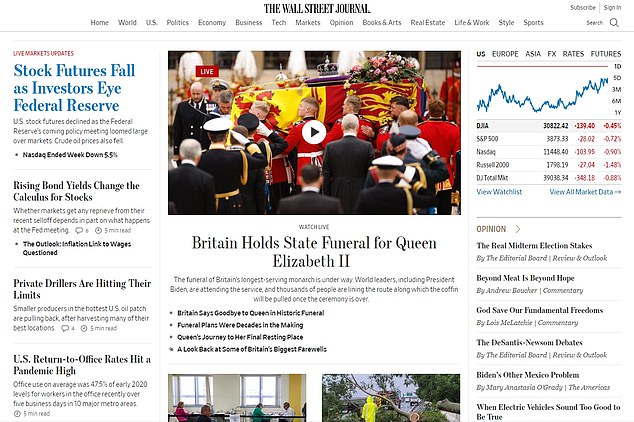 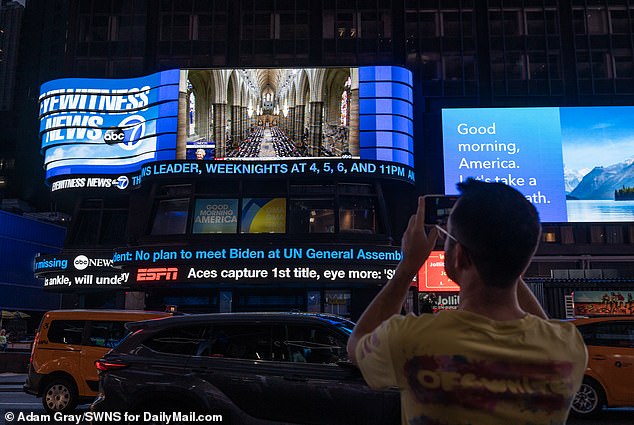 ABC shows a live stream in Times Square that started at 5 a.m., with many stopping to watch 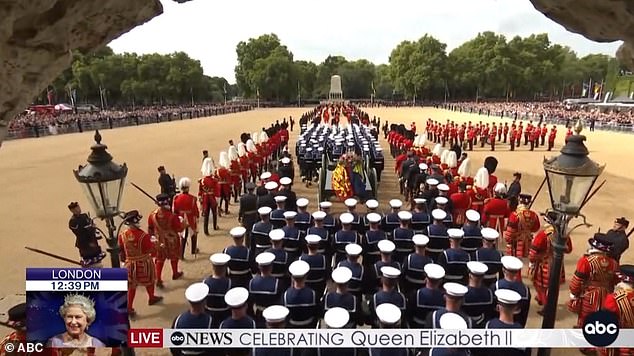 The whole event was easy to follow in the US, with many broadcasters following from the Abbey to Wellington Arch

CBS, CNBC, Spectrum News and MSNBC also carried their own special guests throughout the morning to mark the event.

It is the first time cameras have been allowed at a monarch’s funeral, and the BBC’s coverage is available worldwide on both TV and its website.

The New York Times also had a live stream of the event, after receiving a huge response after posting several pieces criticizing the cost of the funeral.

The newspaper published a story this week that, with apparent surprise, it would be up to British taxpayers to foot the bill for Monday’s funeral.

The report described the ceremony as a ‘hefty price tag’ for taxpayers amid rampant inflation and a cost of living crisis in the UK.

The newspaper estimated the state funeral would cost around £6 million, claiming the amount would contribute to the financial hardships currently facing British families. 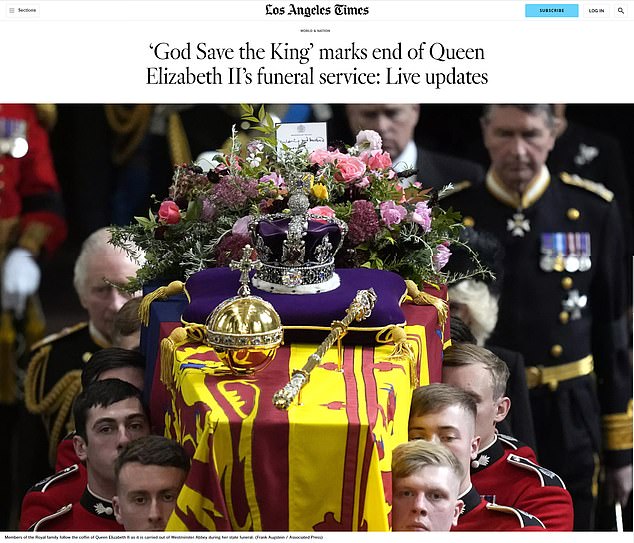 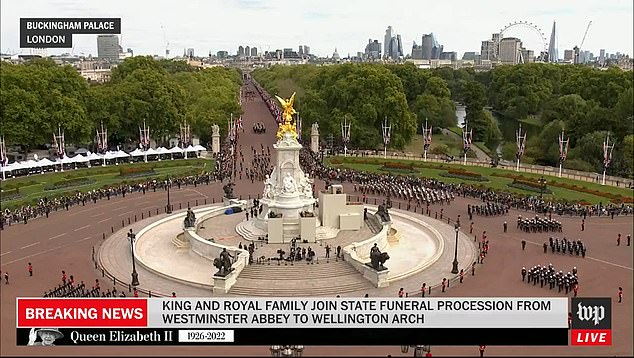 The Washington Post also allowed its readers to follow the coverage live, marking the Queen’s death with a black motif. 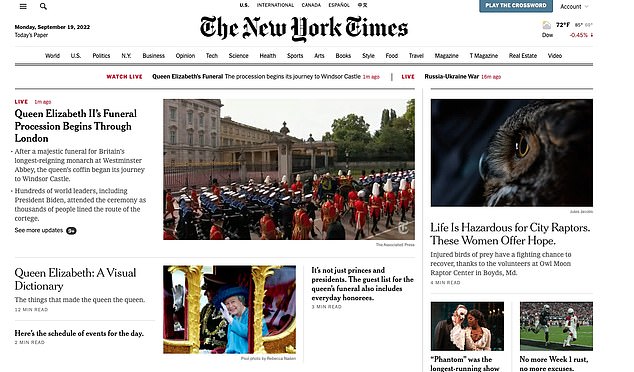 The New York Times also had a livestream of the event, after receiving a huge backlash after posting several pieces criticizing the cost of the funeral. 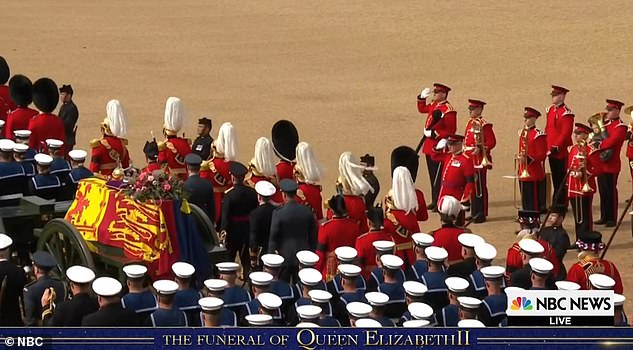 NBC news also covered the entirety of the event, tracking the navy and guards throughout her journey

But now it has been revealed that the true cost per household in Britain will be just five pence.

The New York Times had to admit it was wrong and immediately publish a correction to his story — noting that inflation wasn’t as bad as initially reported.

Other publications continued to report on the “special relationship” between the two countries as thousands of world leaders and hundreds of members of the public began to walk into the abbey as billions of people around the world will attend Her Majesty’s state funeral.

Most of the VIPs arrived by bus and met at the Royal Hospital Chelsea before being put on a bus to central London.

British ministers – past and present – were among the first arrivals, including Nadham Zahawi, Ben Wallace and Jacob Rees-Mogg. But US President Jo Biden went to the Abbey in The Beast – his bombproof limousine, commonly known as ‘The Beast’. 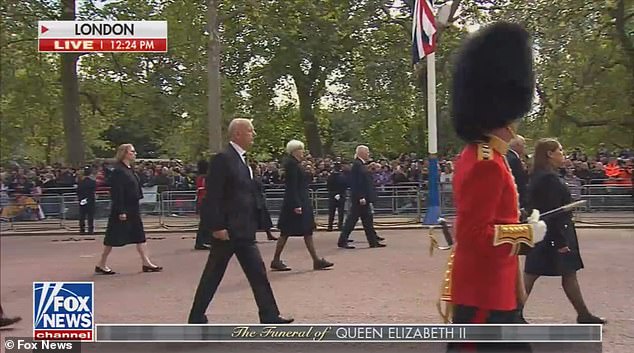 Fox News also followed the event, making sure to follow the Royals as they marched their mother, grandmother and great-grandmother to Buckingham Palace 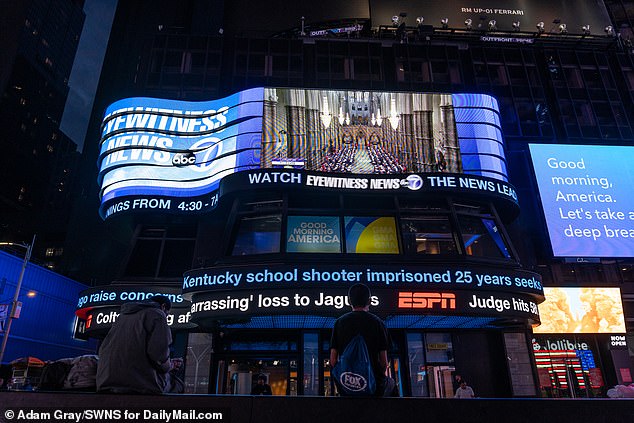 Times Square showed a steady stream of the funeral, and other news was also covered 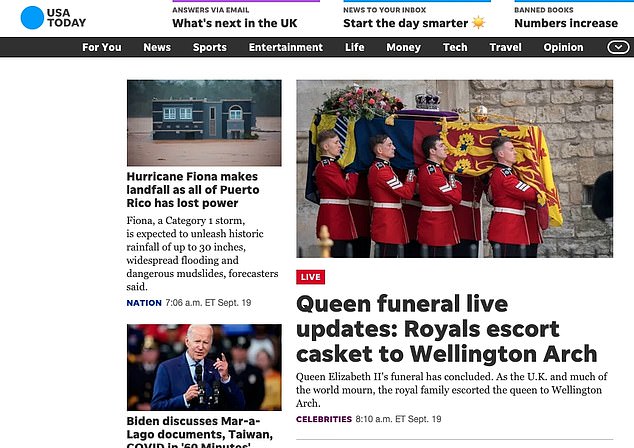 They were also on a bus together – despite their close ties to the royal family. Celebrities at the funeral include TV personality Bear Grylls.

Funeral flowers in the abbey featured myrtle, which, according to royal tradition, was used in the queen’s bridal bouquet.

Surrounding the coffin will be the four tall yellow candles that usually rest around the Tomb of the Unknown Warrior at the entrance to the historic church.

And beyond the hardened royal fans defied the no-camping rules, as people of all ages set up tents, lounge chairs and even a makeshift minibar to grab premium seats for the spectacle that will see 2 million people pour into the capital.

At 8:30 a.m., the public was told the procession route was full and people began diverting people to Hyde Park to watch the big screens.

Thomas Doherty, a media and cultural historian at Brandeis University, said: CNN: I think the final broadcast and eulogies will have a huge audience – the drama, the pageantry, the ritual… a universal shared experience that TV thrives on.