HUGH OSMOND: The temporary need to work from home during Covid has become an ingrained habit 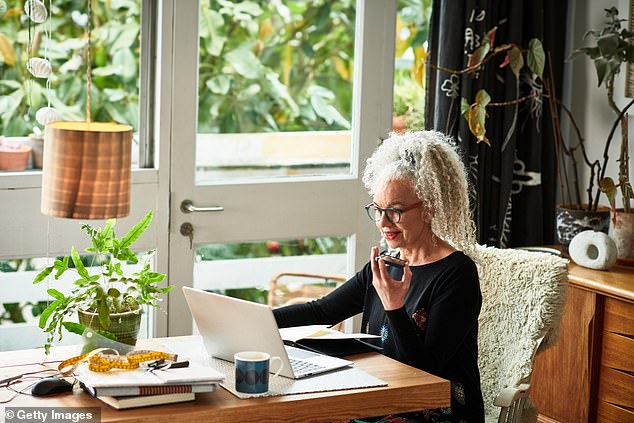 A few years ago, a large insurance company engaged some management consultants to advise them on how to speed up the claims process. Is there perhaps a smart, innovative way to reduce the average time it takes to resolve a claim from six weeks to roughly four?

After observing the teams dealing with claims, the consultants came up with a solution. It wasn’t about expensive technology or radical retraining, it was about making sure all six people on the team were close together.

The result? Claims were processed in just three weeks, leading to satisfied customers and increased profits.

Sitting close together allowed colleagues to pass on and record information quickly and get answers to questions quickly, rather than waiting for replies to emails or phone calls from colleagues who work in a different location. Productivity and morale skyrocketed.

It seems so obvious that people work better if they live in the same physical – not virtual – space. Still, the temporary need to work from home (WFH) during the pandemic has now become an ingrained habit, even a right.

This not only undermines the morale and productivity of workplaces, but also destroys the livelihoods of the many other businesses – from dry cleaners to sandwich shops, restaurants and bars – that depend on people going to work and not staying at home in their pajamas. . .

This month, a survey of 50,000 UK office workers reported that just 13 percent went to work on Fridays, while the average respondent spent just 1.5 days a week in the office.

This month, a survey of 50,000 British office workers found that just 13 percent went to work on Fridays. (File image)

This is a staggering statistic that would have been unimaginable before the pandemic if working from home was a minority activity, usually limited to one or two days a week, and often for compelling personal reasons.

Vibrant city centers that used to be buzzing with life and laughter, especially at lunchtime and after work, are now often echoingly empty.

It’s depressing and heartbreaking. It was announced last week that office availability in central London is at its highest level in more than 15 years. There is currently nearly 31 million square feet of space vacant – the equivalent of about 60 Gherkins, the iconic 41-storey skyscraper in the City of London.

Even Jacob Rees-Mogg, the government’s Brexit Opportunities and Efficiency Minister, whose strenuous efforts to get officials to return to their offices, include leaving notes on their desks that read “Sorry you were gone when I was gone.” was visiting. I look forward to seeing you in the office soon,” admitted his defeat.

This week, faced with their persistent refusal to abandon their kitchen tables and Platoons for office, he announced a plan to sell £1.5bn of London office space, telling the Mail taxpayers shouldn’t be paying for half-empty buildings’.

Why, some may ask, does it matter if offices are empty and people spend less time commuting and more time at home?

Because, as any anthropologist knows, people are better together.

Working when I work in the hospitality industry, it is a phenomenon that I observe on a daily basis.

It is one of the joys of working in the hospitality industry to see people chatting, flirting, laughing, making friends and finding partners for life. How sad if all that is lost because people no longer get together at work, and afterwards.

Working remotely has its place, but for the most part, people are more creative and productive when they are physically together and develop rapport. You don’t build team spirit from your lazy chair. 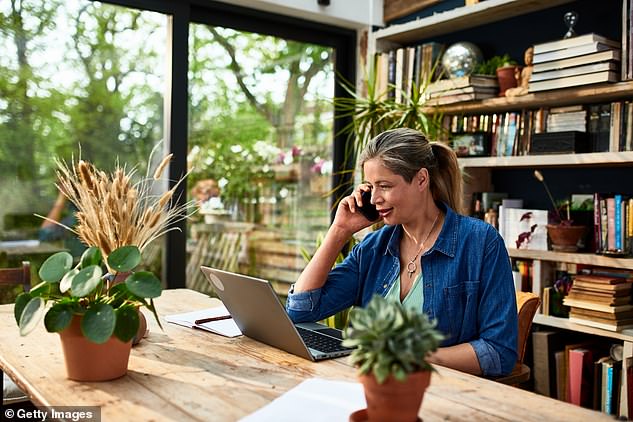 Vibrant city centers that used to be buzzing with life and laughter, especially at lunchtime and after work, are now often echoingly empty. It’s depressing and heartbreaking. (File image)

People may think they are happier at home, but being isolated is not good for us. It breeds loneliness, which can harm your physical and mental health and even shorten your lifespan.

It’s often the shy types, those most likely to work from home, who benefit most from interacting with colleagues and clients. You can see their confidence rise in such circumstances. WFH deprives them of that opportunity. Meanwhile, research has long linked inequality to reduced economic growth, and studies show that inequality thrives when people work from home.

That’s because it’s only an option for white-collar workers. It is not right that those who work in factories, hospitals, shops, restaurants, banks and the like face higher gas costs or train fares, while their bosses claim to ‘manage’ their teams from their vacation villas or country houses.

What about the baggage handlers, for example? What should they think when their bosses aren’t there to show leadership and help resolve the chaos we’ve so recently witnessed at the country’s airports? It is disastrous for morale, which in turn affects productivity and efficiency.

It is especially harmful to young workers who cannot learn from more experienced colleagues around them.

Bosses complain about new recruits who don’t dress appropriately for Zoom conversations — even refusing to turn on their cameras — or talking unprofessionally to clients or co-workers. Having so far spent their working lives at home on a laptop, they seem ignorant of the unwritten rules of professional life.

Other employees seem to find it acceptable to walk the dog, mow the lawn or do the school career during work hours, or have their partner walk in while having a Zoom conversation with their boss.

As for people deluding themselves that they are “even more productive” at home, look at the chaos and delays in various government agencies where remote personnel “work” from the DVLA to the passport office and the courts.

Their jobs may be safe, but in the private sector, where job security depends on the health of the company, loss of productivity has a direct impact on employment. Thanks to the improving labor market, this impact has not yet been felt, but it will soon be.

It’s easy to blame the cost of living for the war in Ukraine. But the truth is that the UK and many other countries have simply produced far fewer goods and services since the pandemic. 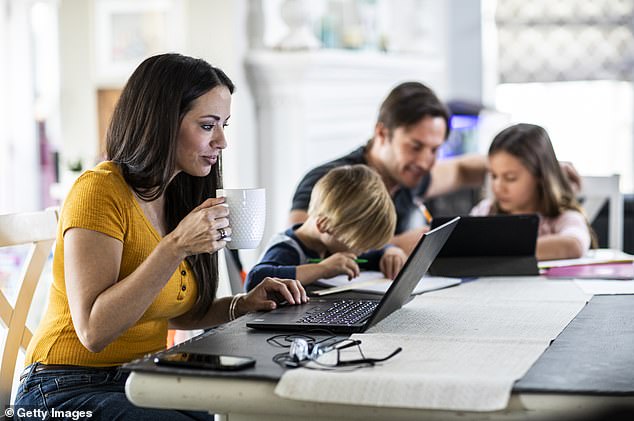 Working from home has mainly led to lower, not higher productivity. At the same time, the government is printing money. People get paid the same if they do less. (File image)

Working from home has mainly led to lower, not higher productivity. At the same time, the government is printing money. People get paid the same if they do less. More money with lower productivity means rampant inflation.

And when people are less productive, there is less money for health care, schools, police. . . all the things people want in society. This must be understood – quickly.

The only way out of this is for people to increase productivity – and for the most part that means going back to the workplace.

Companies with shrinking profits will have to reduce their workforce to survive. Invisible employees are less likely to be missed than those who are there, both in body and mind.

Two studies in China and the US found that 23 percent of on-site workers were promoted within 12 months, compared to just 10 percent of remote workers. Out of sight is out of mind.

A friend of mine who runs a business reports that only 60 percent of his staff are willing to come back to the office. As he says: ‘It’s no coincidence that these are the employees I value the most.’ 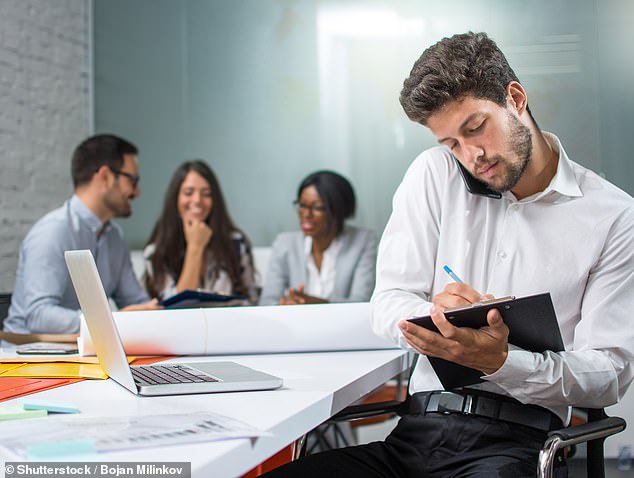 The only way out of this is for people to increase productivity – and for the most part that means going back to the workplace. (File image)

They have the right attitude and will likely be the ones he keeps if he has to cut jobs.

As a restaurant owner, I naturally have an interest in bringing city centers back to life. But my position is more than self-interest.

You need a beating heart in the center of cities where people can meet and socialize at shops, restaurants, bars and market stalls. Without it, people end up living shattered lives; their entire existence, from work to romance, takes place online – at the expense of their sanity.

It is time for both the government and employers to show some leadership and for all of us to put our shoulders to the wheel if we are to get out of the economic crisis. And that means returning to the workplace.

If we don’t, it might not be around for long.

Islamic State families have been repatriated to Sydney as…

Islamic State families have been…

Walmart sued by employee who says she complained about…