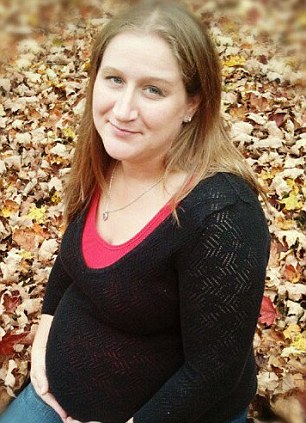 Amid the devastation and damage of Hurricane Sandy, a New Jersey couple celebrates the miracle of life after going through a terrifying ordeal to give birth to their baby boy.

A pregnant mother went into labor as the superstorm pounded the northeast Monday evening, forcing the mother-to-be in dangerous conditions outside to seek medical attention.

Though only 35 weeks pregnant, Christine Schleppy, 34, started going into labor at her home in Skillman, New Jersey, just as the hurricane was wreaking havoc in the Garden State and warning all residents to seek shelter and stay indoors.

Desperate for medical attention as her contractions increased in frequency, her husband, David, called 911 and paramedics braved the horrendous weather just as the storm landed.

“We knew that many trees were falling and roads were being closed left and right,” her husband David said ABC news†

First responders tried to transport the couple by ambulance to a hospital in Princeton, but flooding and dangerous road conditions made that impossible.

Aftermath: Scenes of Desolation on the New Jersey Coast

Then the ambulance got stuck in the mud and because the mother was in severe pain, she was taken to a fire engine to take her the rest of the way.

“It was definitely stressful,” her husband said.

The ambulance was finally able to reach a mobile medical unit set up by Hackensack University Medical Center, which had temporarily squatted in the gym of a local church.

The newborn weighed 5 pounds and 2 ounces. The pair are already parents to five children, but their latest addition is certainly the brood’s most memorable arrival. Mother and child would be healthy and doing well.

They had been transported to a nearby hospital until they could go home.

Can Sandy postpone next week’s presidential election? Yes, in theory