IAN BIRRELL: Is this the beginning of the end for the Kremlin killer? 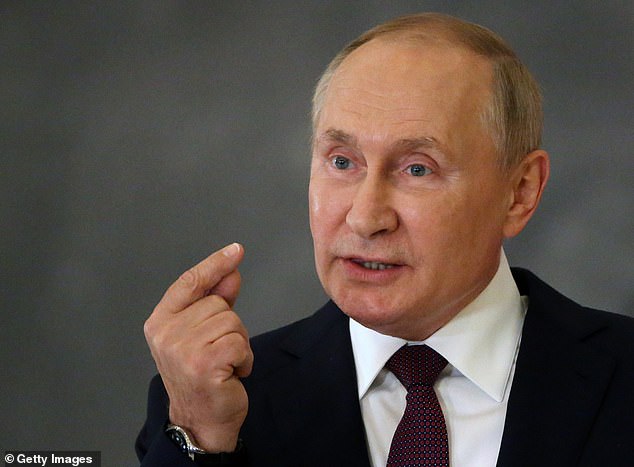 Vladimir Putin built his dictatorship on two fundamental foundations: ruthless control over his nation, whether tearing up his wealth with his friends or silencing dissident voices, and restoring Russian glory in the wake of the collapse of the Soviet Union.

So the little despot posed as the modern-day successor to Peter the Great, that 18th-century giant who created the Russian Empire, while rehabilitating Joseph Stalin, ramping up repression, and bolstering his armed forces.

Six of the first 11 decrees he passed after becoming president in 2000 focused on the military — and since then, he’s nearly tripled defense spending to fund his aggressive foreign policy.

Yet Putin faces humiliation after his failed invasion of Ukraine. First, his plan to take Kiev within a few days was thwarted. Now his beloved army in Kharkov has collapsed, reportedly losing 3,000 square miles in just six days.

This is a pivotal moment – ​​and a significant morale boost for both the country under attack, in so much pain, and its allies in the West as the energy crisis caused by this crisis begins to bite.

Vladimir Putin built his dictatorship on two fundamental foundations: ruthless control over his nation, whether tearing up its wealth with his friends or silencing dissident voices, and restoring Russian glory in the wake of the dissolution of the Soviet Union.

Once again we see the characteristic atrocities of Russian troops with the discovery of two mass graves in the recaptured city of Izyum, one with soldiers, the other civilians. Some corpses are tied up and show signs of execution and torture. And we have seen the incredible courage of a nation fighting for both survival and the cause of democracy in this epic confrontation with dictatorship.

Like any bully, Putin responds with threats. He warns of a more “serious” response, which is horrifying given its stockpile of nuclear and chemical weapons – though most likely means more horrific attacks on Ukraine’s civilian infrastructure. And while pretending his “special military operation” is going according to plan, the Kremlin killer hints that he may need to mobilize more troops by calling up conscripts after seeing the massive loss of men and weapons.

Ukraine claims nearly 25 percent of Russian troops have been killed, wounded or captured, with two-thirds of Moscow’s tanks and one-fifth of military aircraft disabled. One division alone lost 90 tanks in the panicked retreat from Izyum. 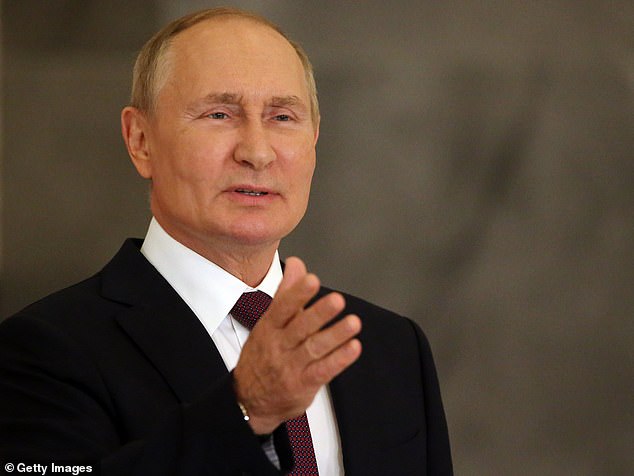 Russia loses, but has not lost yet. Putin’s power is dwindling, but he remains in charge. This is a dangerous moment in our history – and we must show the same determination as the Ukrainians in defending democracy

No wonder there are signs that Putin’s stranglehold on Russia is beginning to loosen. Suddenly, there is a rumble of discontent from his most extreme supporters, including hardline nationalists, talking heads on state television and bloggers with ties to the military.

These distraught former allies fear their country will face defeat, so they push the Russian president to escalate the war while blaming other military and political leaders for the “catastrophe.” But some elected politicians, including those from Putin’s home city of St Petersburg, dared to back a statement earlier this month demanding that he resign.

There has been bloodshed with new border clashes in two troubled parts of the former Soviet empire. Is this another sign of the president’s waning power — and possibly an omen of the future if the Russian Empire collapses after its stupid war?

The West must step up its support to hasten the end of this terrible conflict, as there can be no lasting peace until Putin is evicted from the entire territory of Ukraine.

Russia loses, but has not lost yet. Putin’s power is dwindling, but he remains in charge. This is a dangerous moment in our history – and we must show the same determination as the Ukrainians in defending democracy.

Trawling through the forest of graves: Masked from the stench, investigators in Ukraine search a mass cemetery on the outskirts of Izyum for evidence of war crimes committed by Vladimir Putin’s invaders

By Askold Krushelnycky in Izyum, Ukraine

The remains of hundreds of corpses have been found on the outskirts of Izyum, a city liberated last week during the spectacular counter-offensive against the Russian occupation.

Forensic detectives wearing masks against the overwhelming stench have tirelessly dug through the site, according to The Mail on Sunday.

The extent of Russian terror in this part of eastern Ukraine is only now beginning to become apparent.

Many of the dead were found with their hands tied behind their backs – believed to be evidence of torture and cold-blooded executions, according to local police investigator Serhiy Bolivnov.

As officials gather meticulous evidence, each investigation is videotaped. The removal of each body is overseen by two medico-legal experts and a war crimes investigator from the Attorney General’s Office. 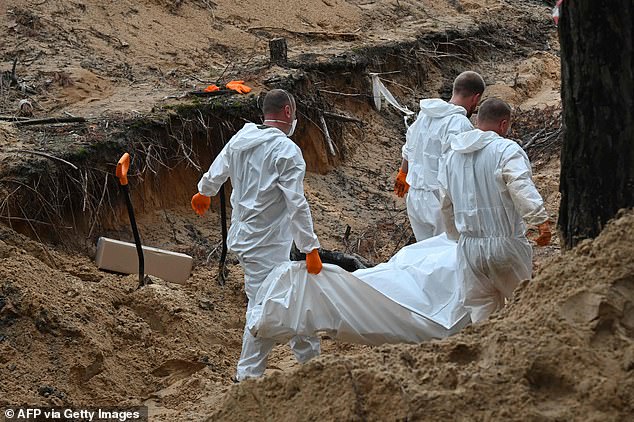 GRIM TASK: A forensics team removes one of the exhumed bodies from the mass graves discovered near Izyum 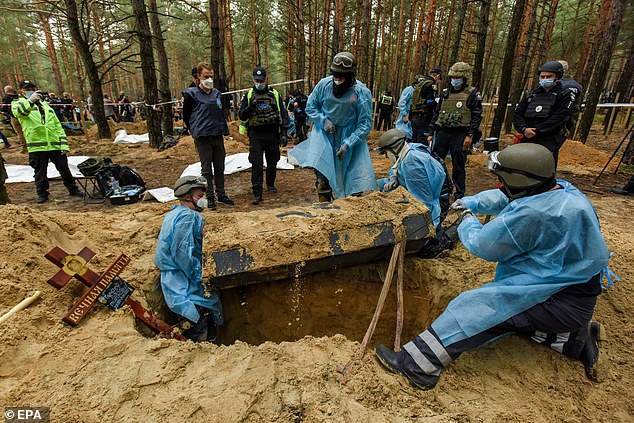 Many of the dead have been found with their hands tied behind their backs – suspected evidence of torture and cold-blooded executions, according to local police chief investigator Serhiy Bolivnov

The bodies will be taken to morgues in Kharkiv for post-mortems, and the results are expected to be handed over to the United Nations and other international agencies ahead of potential war crimes trials.

Since the start of the war, Izyum’s population has fallen from 50,000 to just 12,000 – many too old or weak to leave. At the moment the city has no gas, electricity or water.

An elderly woman, Yevdovika, has been left homeless after her apartment was destroyed by Russian shelling.

Standing in a devastated cityscape, strewn with ruins, she said: ‘The Russians, what swine, why did they come to Ukraine? They destroyed everything. They said they were here to set us free. What did they free us from? Of a pleasant life that was so wonderful a few months ago.’ 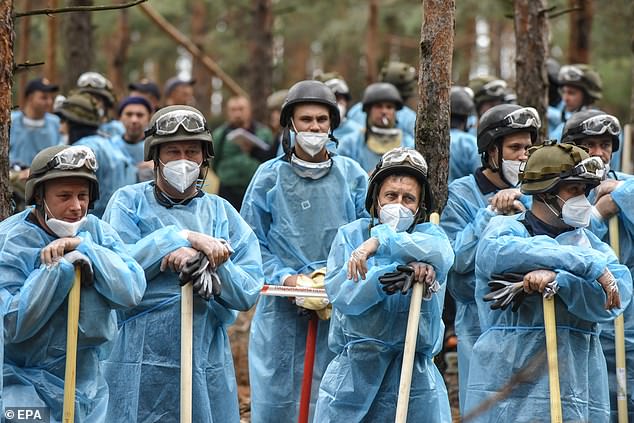 A 50-year-old man, Maksym, told how he had been captured and tortured by Russian security agents while he had stayed to care for his elderly mother.

He said he was repeatedly beaten and given electric shocks when he resisted his torturers’ demands for names of resistance fighters. “They used a device that looked like an old-fashioned telephone with a hand crank that produced an electric shock by turning the handle. The faster they turned it, the more intense the shock.

“They put electrodes on my hands and my whole body was shaking with pain.”

His limbs bear the marks of the handcuffs and leg irons he had to wear. 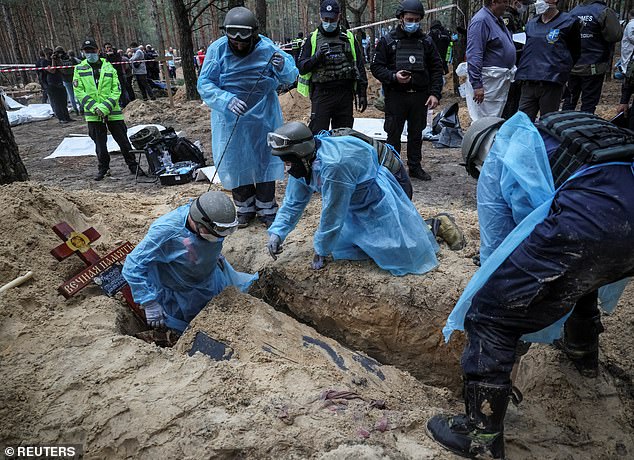 Members of the Ukrainian emergency service, police and experts work at a mass funeral site during an excavation

Maksym found the electrocution device left behind by his captors in their haste to leave Izyum, and has handed it over as part of evidence for war crimes trials.

Visiting Izyum, Ukrainian parliamentarian and human rights ombudsman, Dmytro Lubinets predicted: “A lot of such sites will be found.”

In recent weeks, Ukrainian forces have recaptured large swaths of territory, liberated more than 150,000 of their fellow citizens and drove some of the occupying forces back to the Russian border they had crossed when the invasion broke out on February 24.