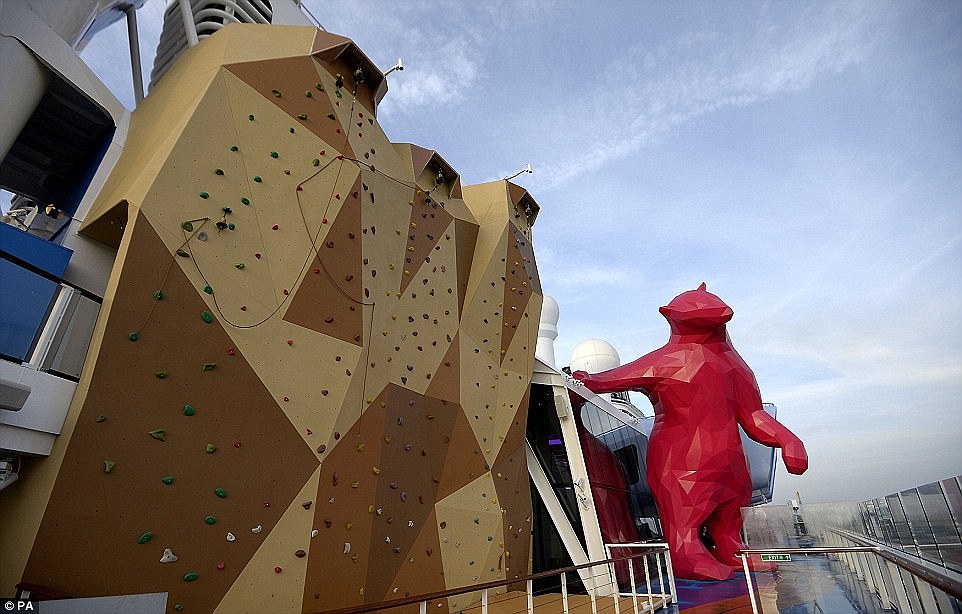 There’s nothing too flash about Captain Charles Teige’s bridge room.

But it’s about the only only spot on the massive cruise liner Voyager of the Seas left untouched by an $80million make over that has made it one of the most salubrious ships ever to set sail.

Whether it’s intentional or not, his office has quite evidently escaped the glitz and glamour of the Royal Caribbeans’ refurbished Voyagers of the Sea.

Despite his ship’s sparkling new interiors – which cost $80 million – it appears the captain’s commanding room was left untouched.

The bridge room – with uninterrupted views of well, the sea – has a classic old school feel but a touch of retro with its soft velvet blue lounges and traditional navigation gadgets to an intriguing scooter sitting in the middle of the room.

Up on deck 10 of the biggest ship to sail in Australia, this is what can be considered the best seat in the house.

Then there’s the world’s first smart ship – Quantum of the Seas which cost $1billion – complete with a robot bar and a skydiving simulator. 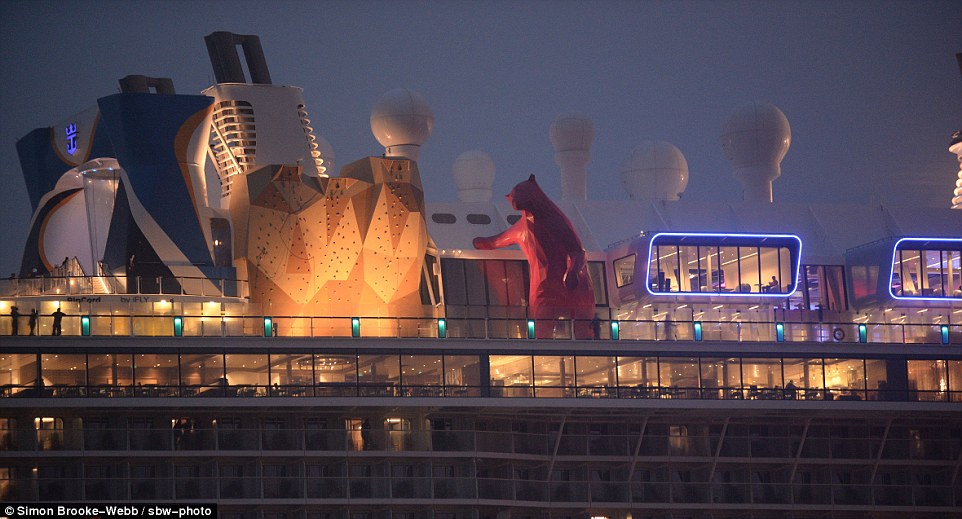 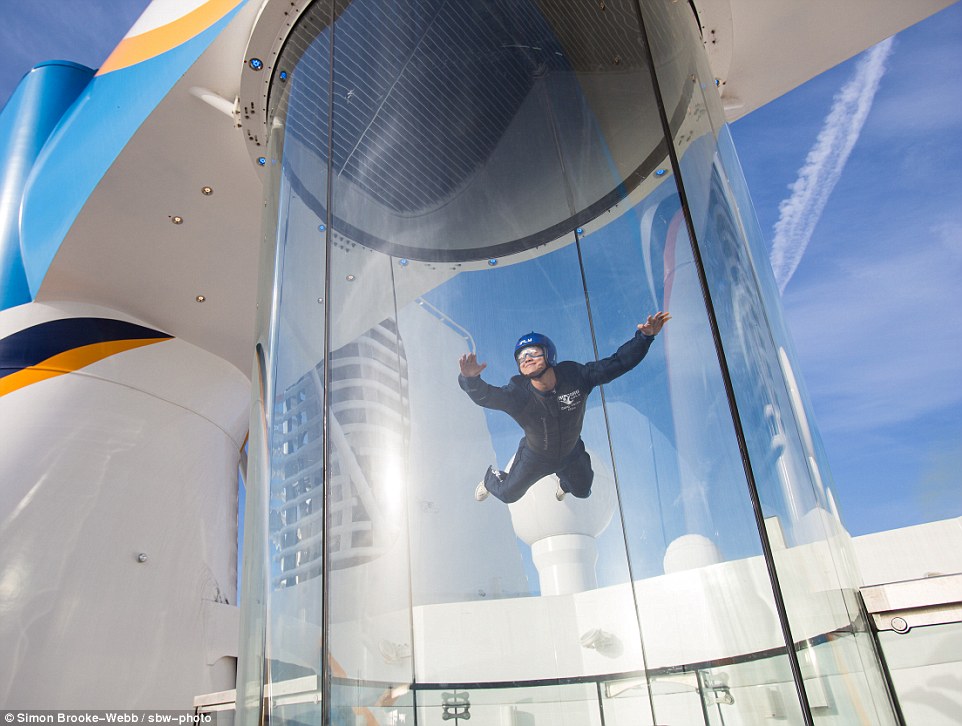 The ship also features a skydiving simulator – iFly by RipCord 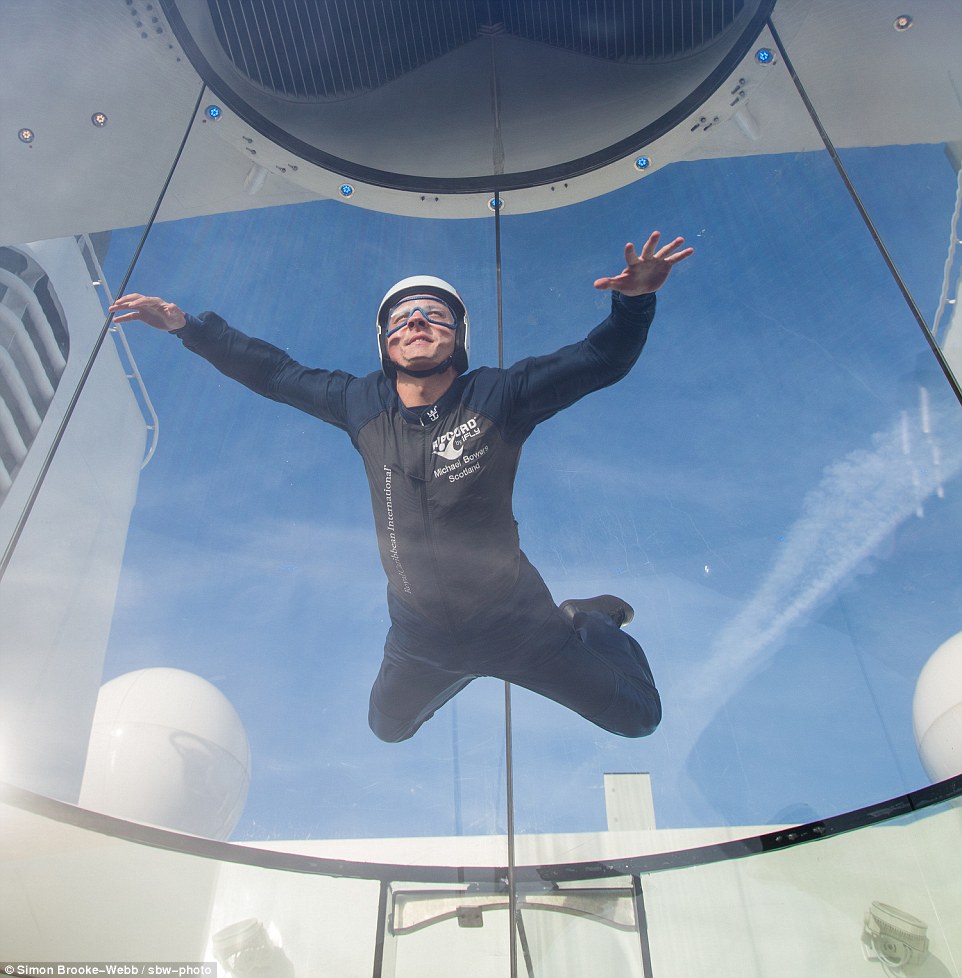 The Voyager – which set sail for the first time since its multi-million dollar refurbishment – embarked on a 14-day journey from Singapore and arrived in Sydney on Monday morning.

Aboard the exclusive part of the ship, just outside the bridge room, hangs a collage of landscapes which capture Norway’s natural beauty – the home of Captain Charles Teige.

What’s notably different about the captain’s room from the rest of the luxurious ship is an apt and simple colour scheme of sea blue carpet, curtains, lounges and ceilings.

The room lets the wall-to-wall windows do all the talking, taking advantage of the panoramic water views which are stunning from this part of the deck.

Although for security reasons not too much was revealed on the background of the bridge room, there was one particular feature that stood out from the rest.

The scooter, with a plaque engraved ‘captain’ on the front, holds historic value.

It was gifted by the ship yard in Finland that built the Voyager back in 1999, hence is just as old as the vessel itself.

Having taken over the reigns of the ship since then – back in 2002 – Captain Charles is proud of the Voyager and how far it’s come over the years. 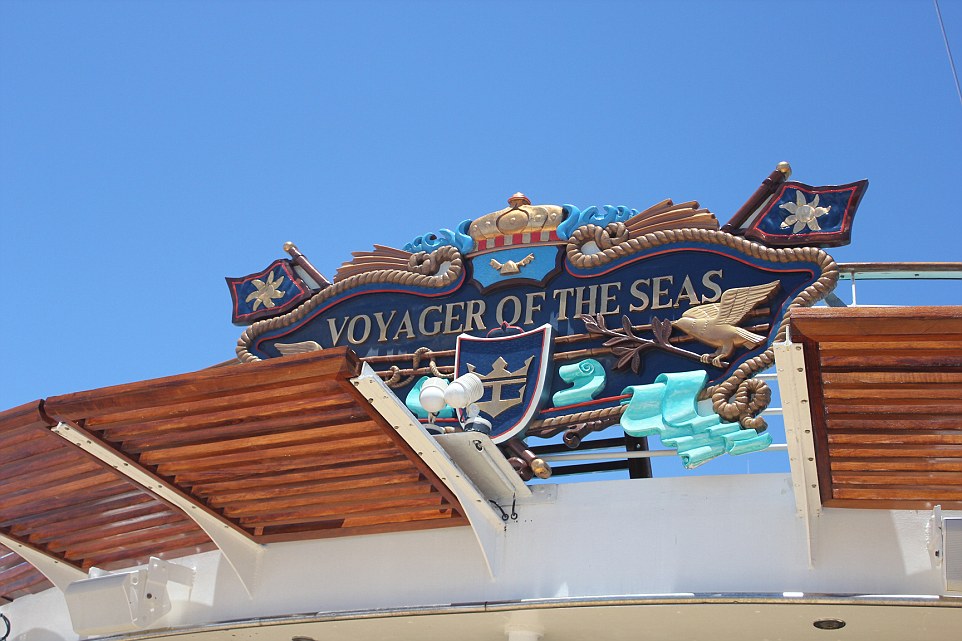 The ship sailed from Singapore through to Darwin, Brisbane and then Sydney 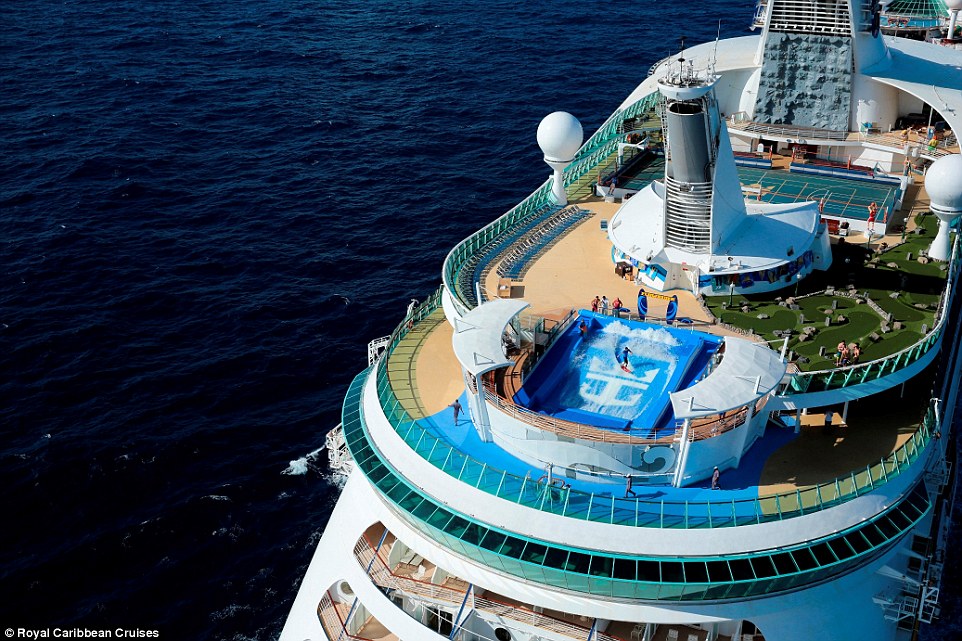 A view of the top deck of the Voyager, featuring one its newest and main attractions the FlowRider – a surf pool 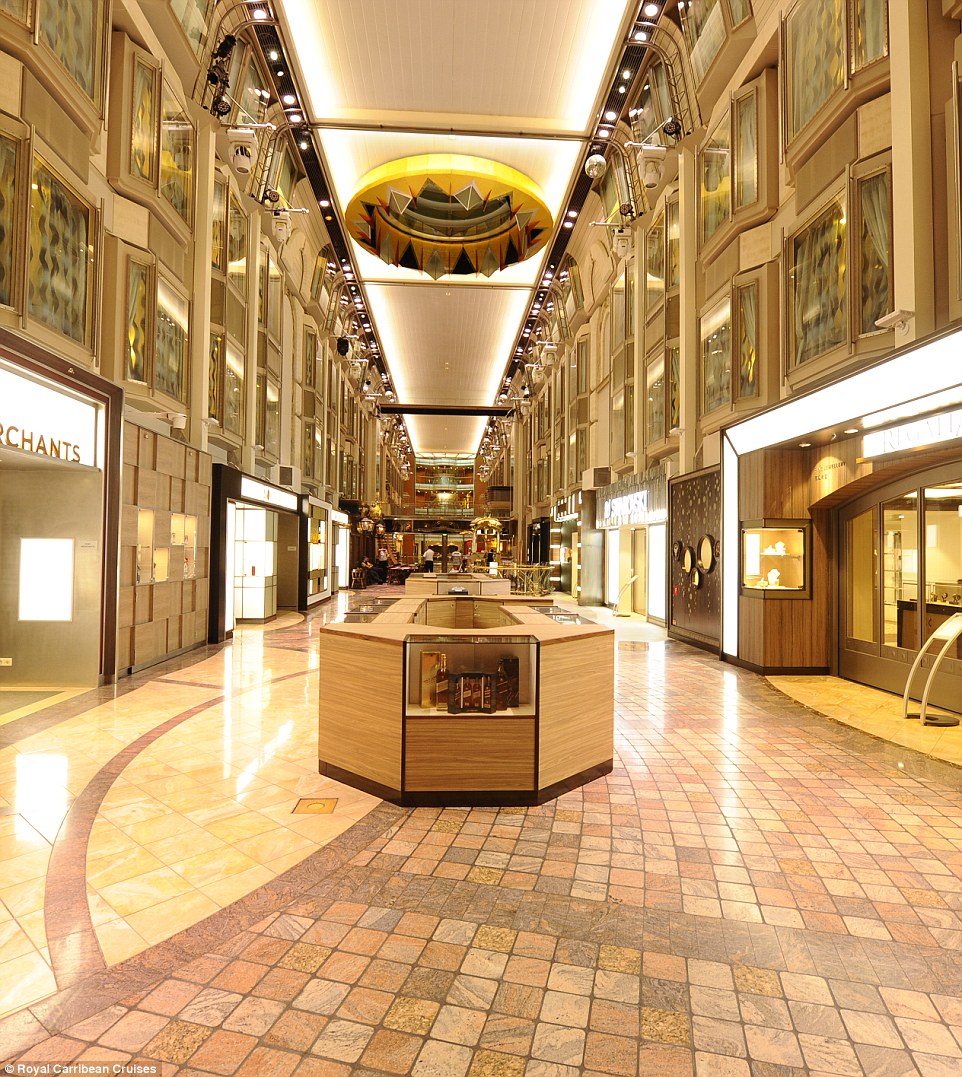 The Royal Promenade in the ship, which features high end stores, was also part of the major refurbishment 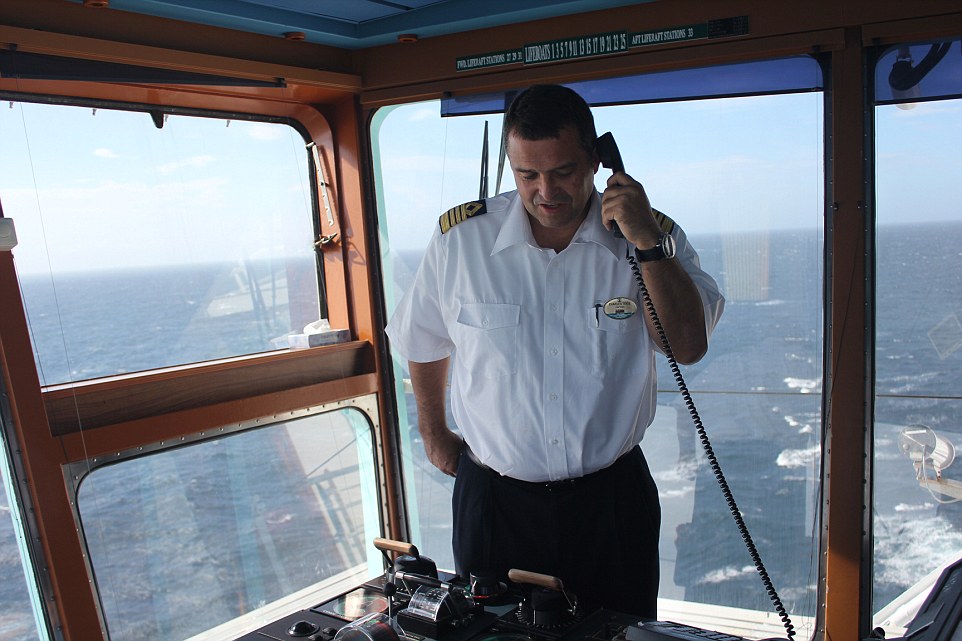 Captain Charles Teige, of Norway, pictured in the ship’s bridge room during the journey to Sydney 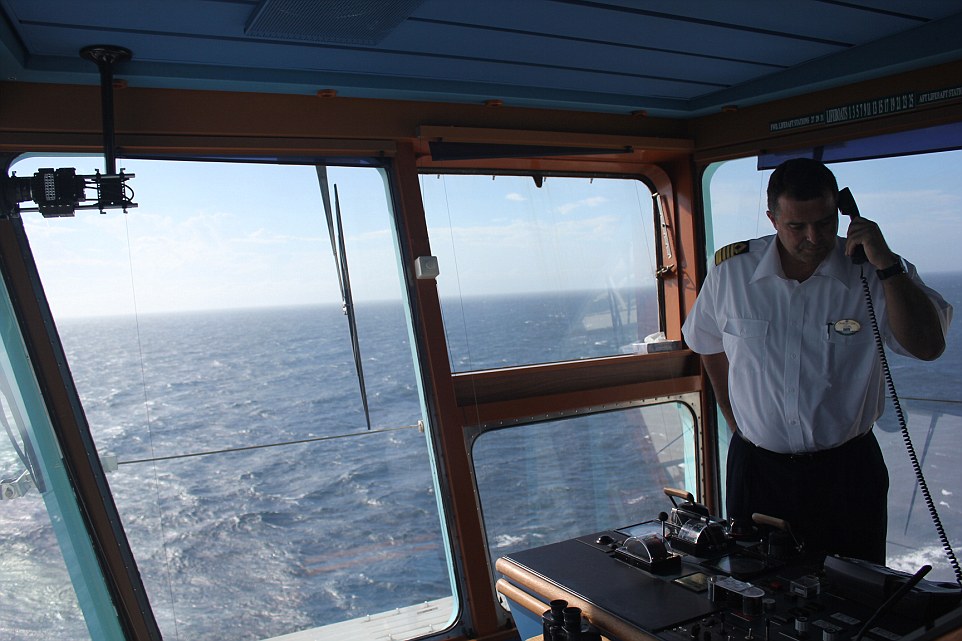 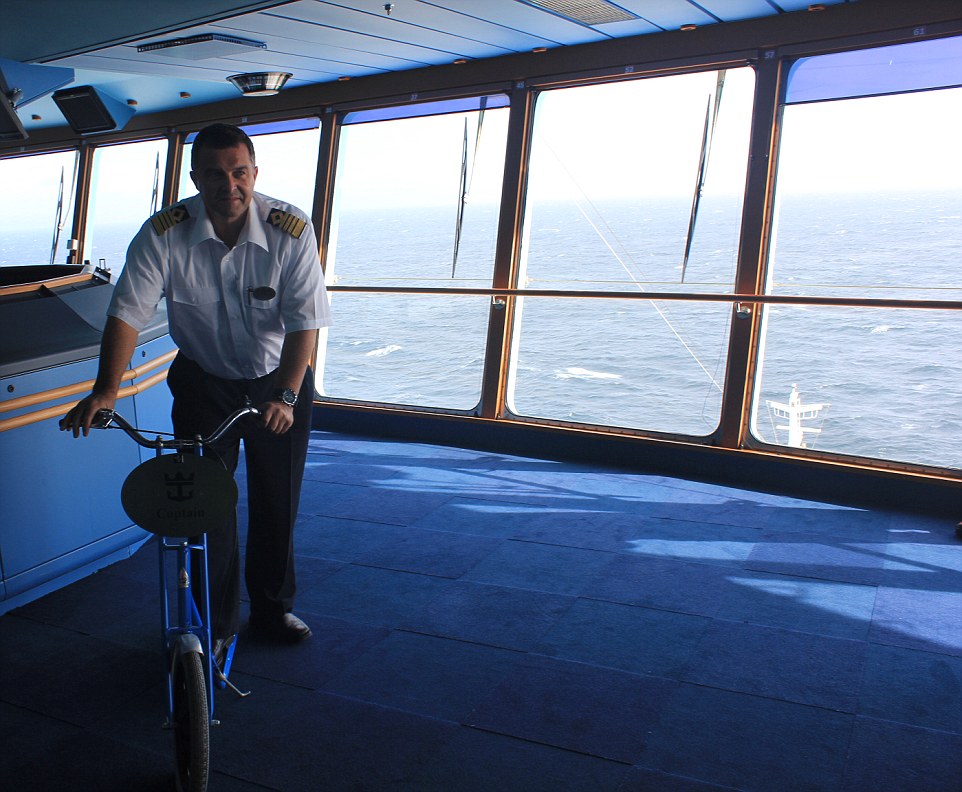 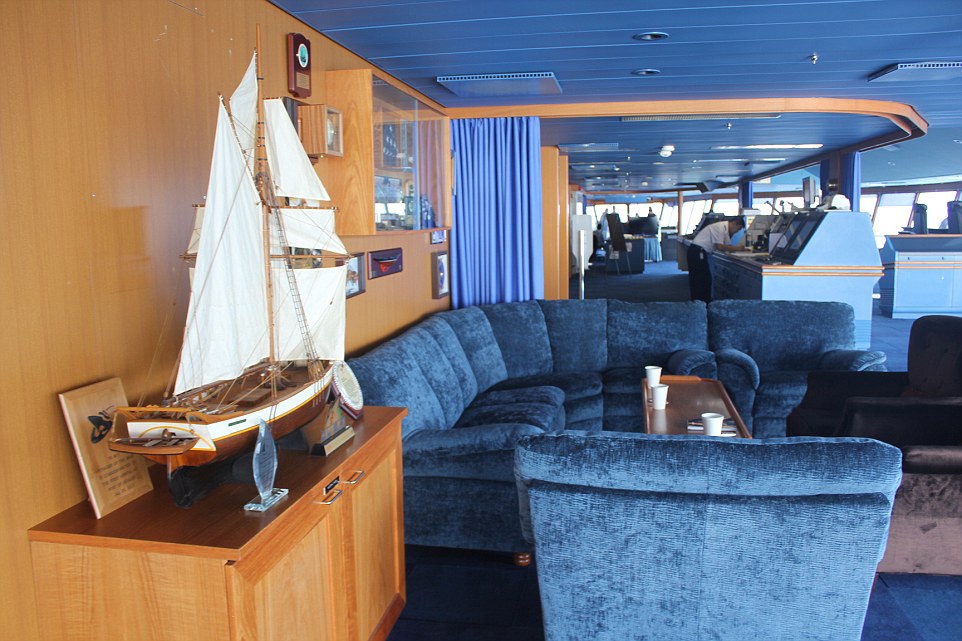 The bridge has a classic old school feel with an apt yet simple colour scheme of sea blue carpet, ceilings, lounges and curtains

The 50-year-old spoke to Daily Mail Australia just before his vessel ended its first trip in Sydney since its major makeover.

‘She’s a fantastic ship,’ he said.

‘This ship is about 14000 tonne and we are three times bigger than the Titanic.’

In 1999, when the Voyager was first built, it was the biggest cruise ship in the world. Now it’s the Royal Caribbean’s Oasis of the Seas and Allure of the Seas.

Commanding the Voyager, which recently underwent a major dry-dock in October and finished just two weeks ago, has fulfilled Captain Charles’ childhood dreams.

He explained his father and grandfather were both commanders of a ship.

‘I knew I wanted to be a captain when I was five years old but I never dreamed of being a captain of a fantastic ship like this,’ he said.

‘It’s something that all Norweigians dream of being and I come from three generations of captains.’

While the new and improved cruise liner boasts the addition of three specialty restaurants and a mammoth poolside cinema to virtual ocean views from staterooms and new pool surfing attraction called the FlowRider – Captain Charles remained unfazed that his office merely underwent a few upgrades to the bridge facilities and was also recarpeted.

‘If you like the ocean this is an amazing place to be,’ he said. 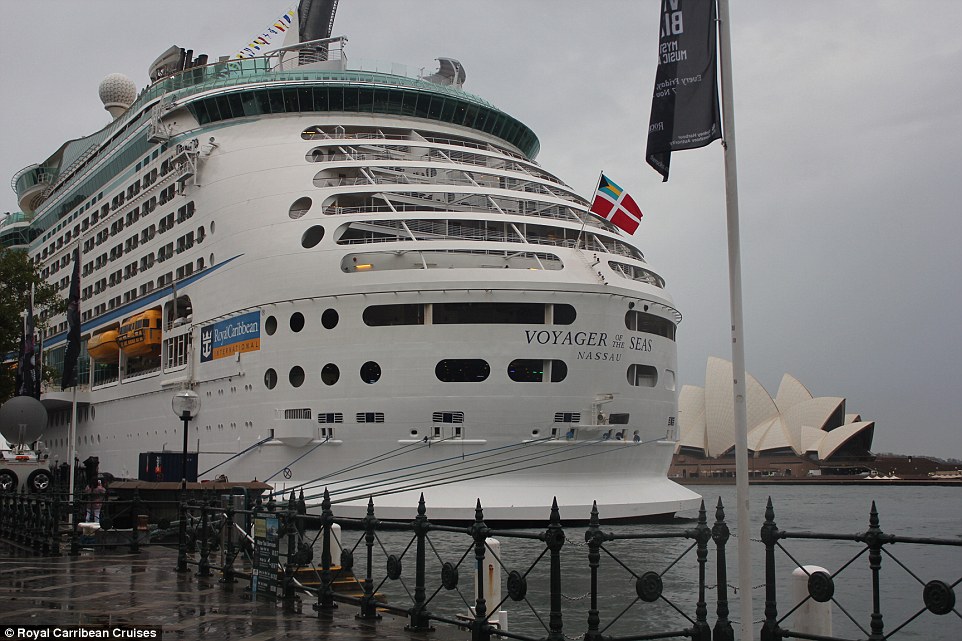 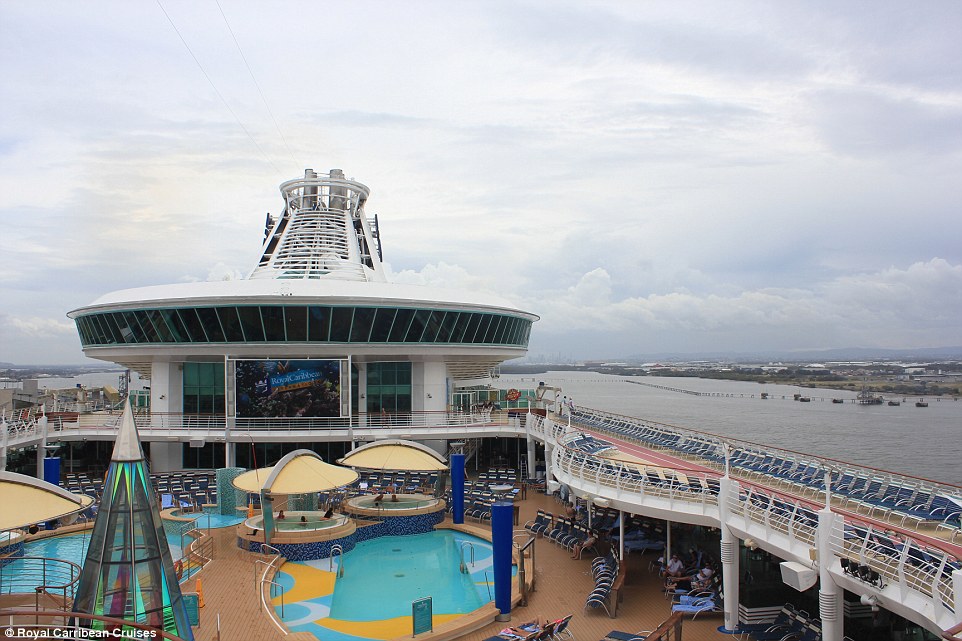 But the Voyager isn’t where it stops for the Royal Caribbean.

The world’s first smart ship – the Quantum of the Seas – features a robot bar, a skydiving simulator and a pod that takes voyagers 90 metres into the sky.

Built in Germany, the vessel cost over $1billion and will be based in New York for several months before migrating to Asia.

Daily Mail Australia were also given a behind-the-scenes tour of the vessel, including the captain’s cockpit, engine room and waste management rooms.

Feeding over 4000 passangers, it’s various kitchens go through 6800 kilograms of rice and over 216000 eggs every week. 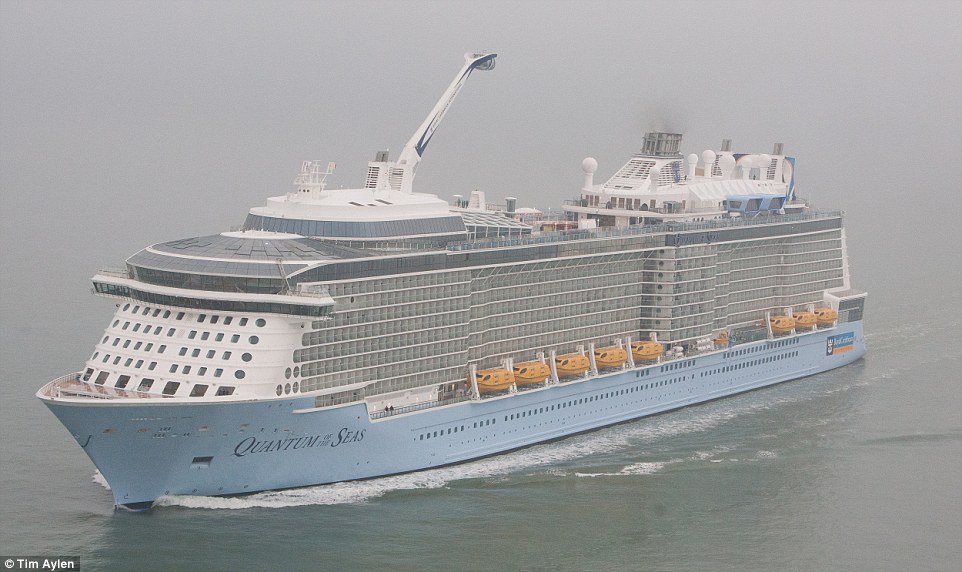 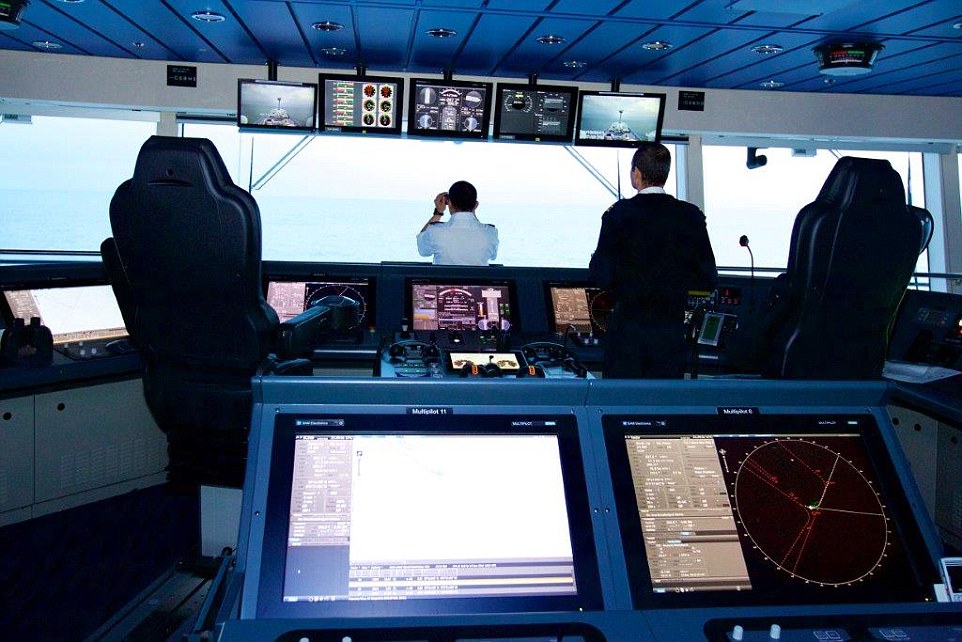 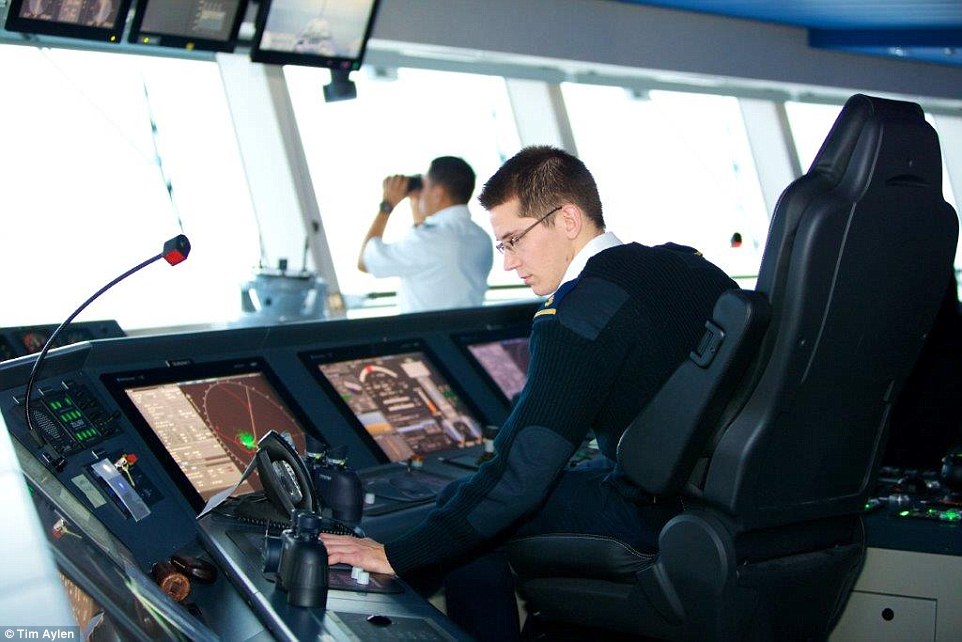 The ship cost over $1billion to manufacture, with techological innovations inside and outside the control room 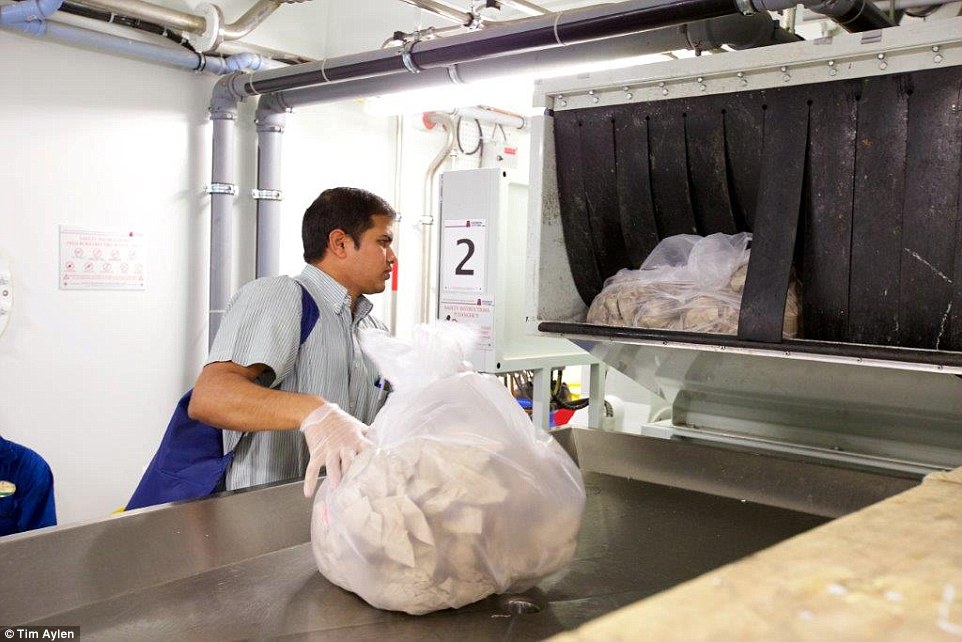 Green: The vessel is touted as the most environmentally friendly cruise ship in operation, a full 20% more fuel efficient than Royal Caribbean’s already established Oasis and Allure Of The Seas lines

Feeding over 4000 passangers, it’s various kitchens go through 6800 kilograms of rice and over 216000 eggs every week

The ship is dubbed a ‘smart ship’ for several reasons, most notably it’s various technological innovations.

Above the iFly is the North Star, a glass sphere which voyagers step into which is then craned 90 metres into the sky.

Beyond the ‘first at sea’ features is a ‘first ever’ – the Bionic Bar, which has two robotic arms – named B10 and N1C – serve up cocktails that patrons order through tablets.

When it comes to entertainment the ship has a music hall as well as Two70, an entertainment venue that presently houses productions Mamma Mia and Starwater. 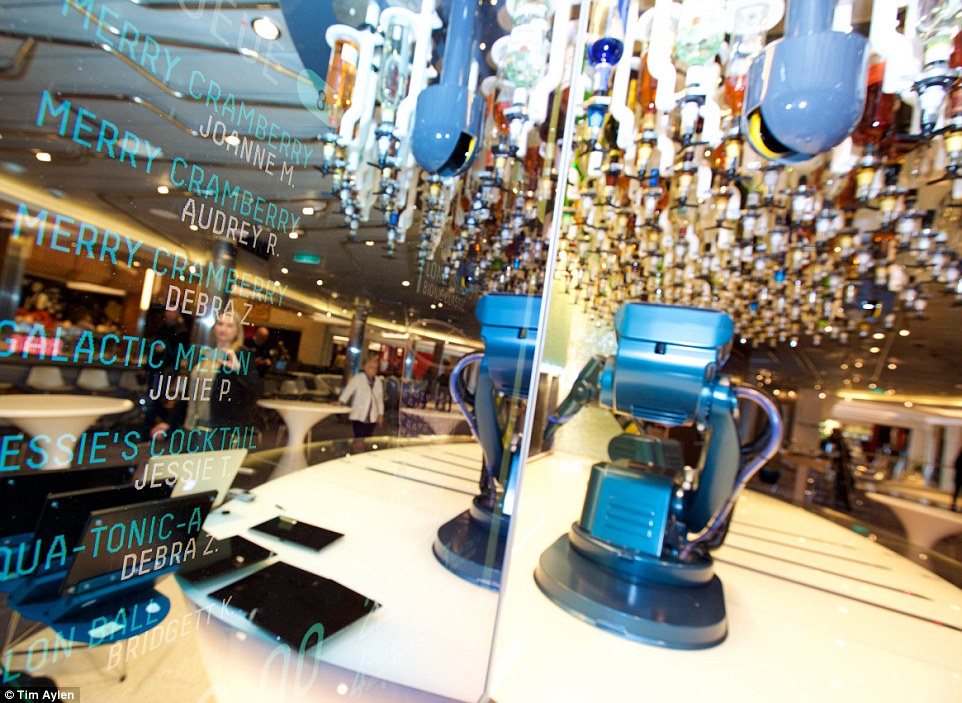 A wall to the side shows the cue of drinks, and customers can either chose an established cocktail or design their own 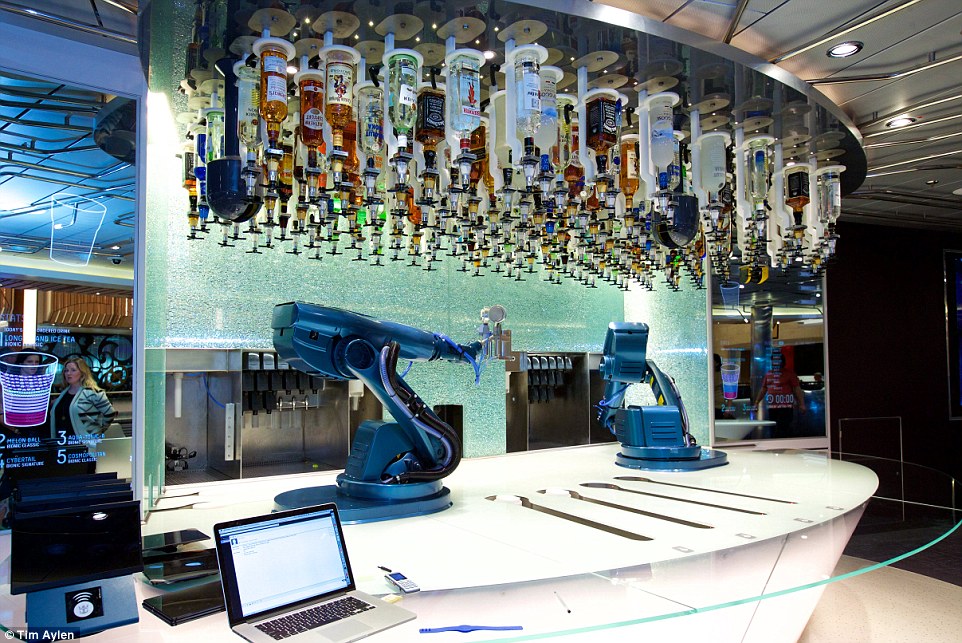 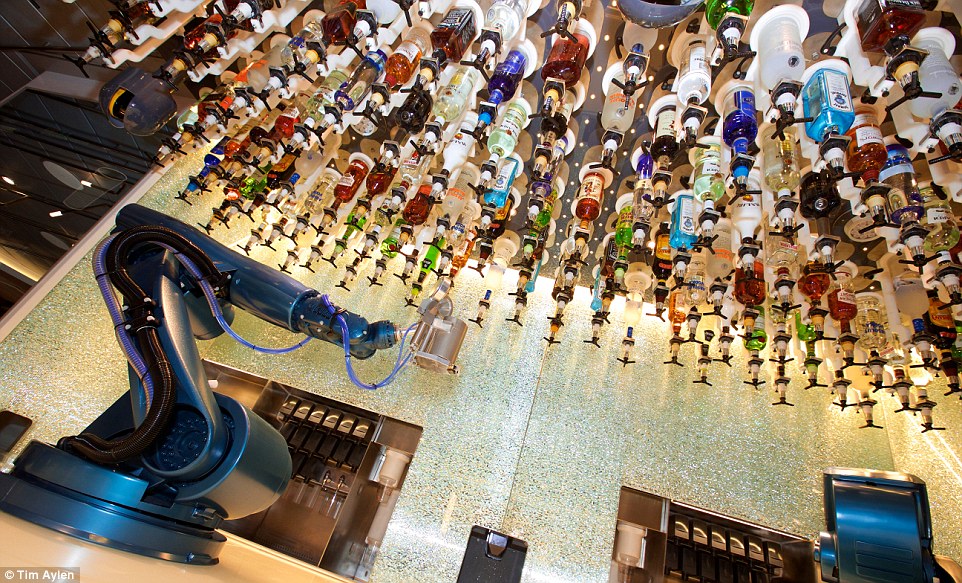 The cyborg arms – named B10 and N1C – spring into pouring, stirring and shaking action after cocktails are ordered through tablet devices 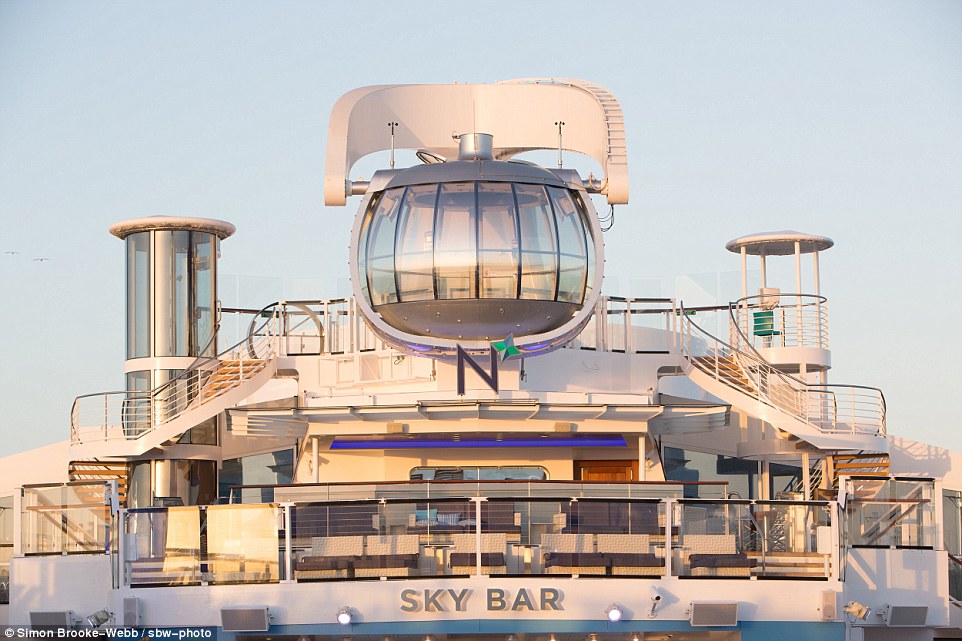 Another first is the North Star, a glass sphere that circles the vessel and takes voyagers up to 90 metres high 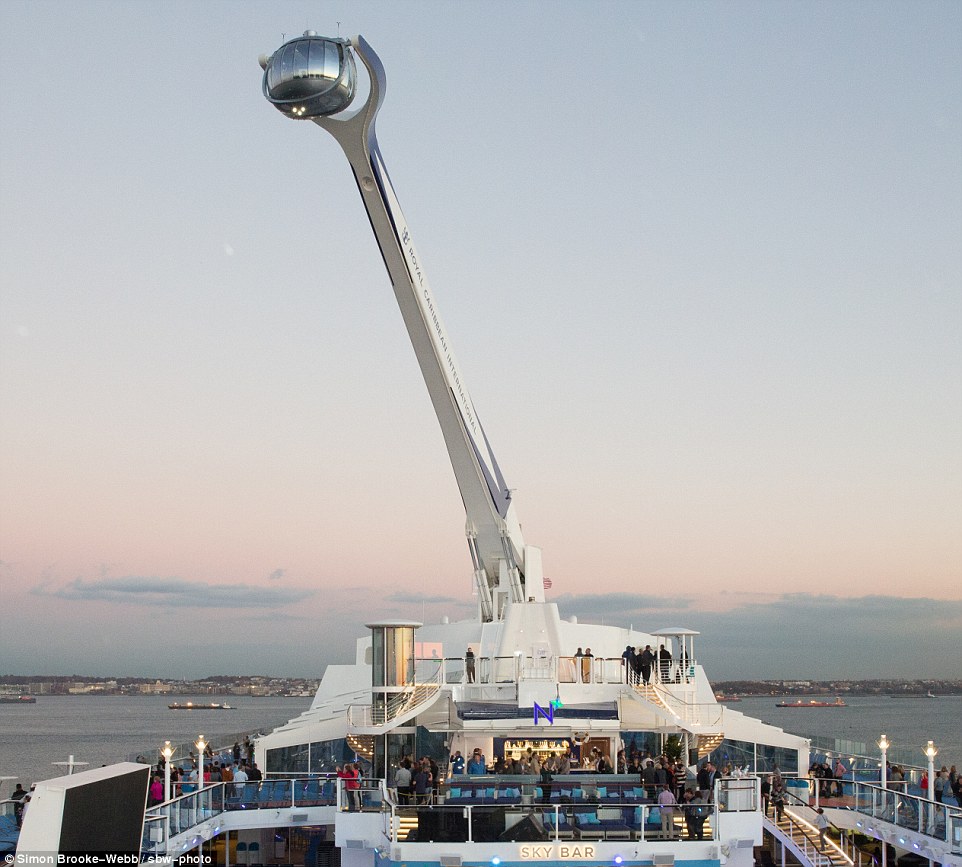 The Quantum has been touted the most environmentally friendly cruise ship in operation, a full 20 per cent more fuel efficient than Royal Caribbean’s already established Oasis and Allure Of The Seas lines.

It’s the first to introduce an Advanced Emission Purification system, which rids its emissions of sulfur dioxide, and Quantum runs exclusively on LED light bulbs, ridding itself completely of incandescent lights.

The 16 deck, 348m x 41m vessel is further equipped with a rock climbing station – beside an ornamental pink bear statue, which the crew have playfully named Felicia, a ‘FlowRider’ surfing simulator and the SeaPlex, a venue for the younger travelers which features bumper cars, basketball courts, ping pong tables and video games.

The vessel is supported by approximately 450 times the industry standard of bandwidth, allowing for smooth internet access when the ship is far out at sea. 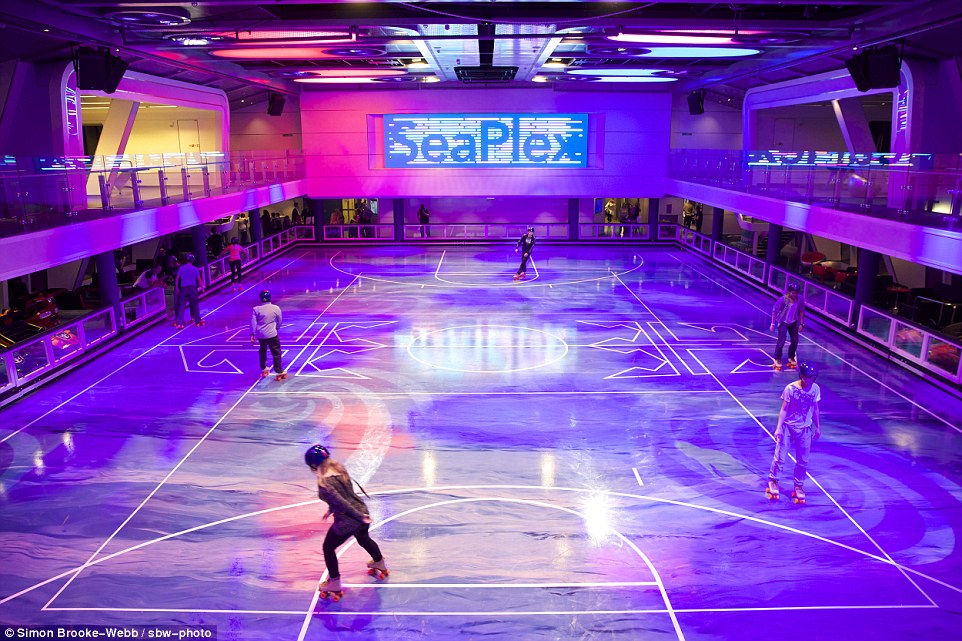 For the kids is the SeaPlex, a venue which features bumper cars, basketball courts, ping pong tables and video games 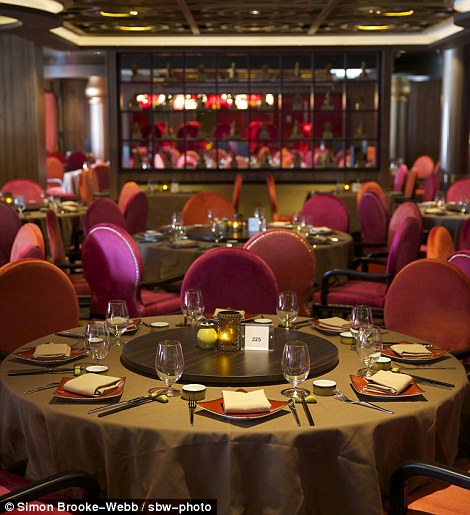 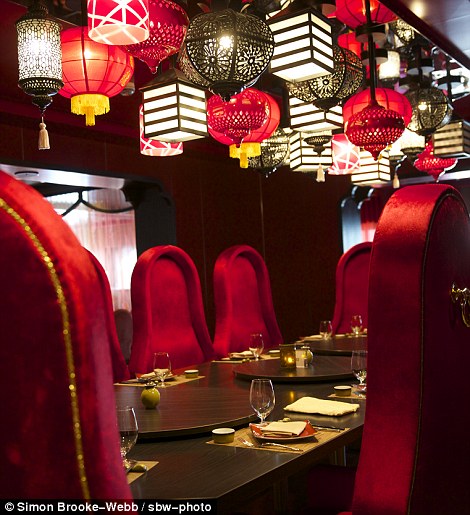 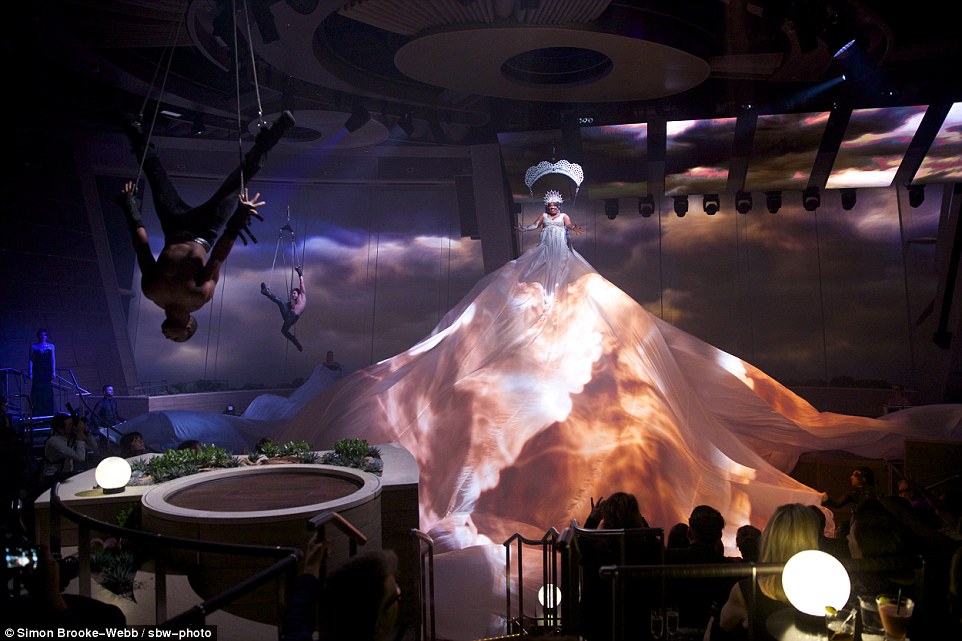 Check out the business stories that got us talking this week