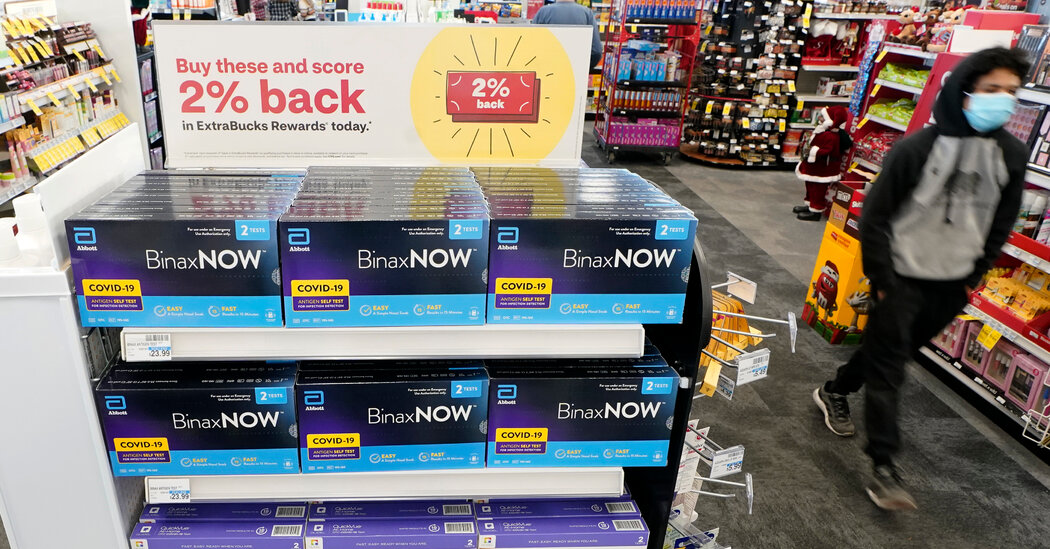 Beginning Saturday, new federal rules will require private insurers to cover the home coronavirus tests Americans buy in pharmacies and other stores. The new system could theoretically allow millions of consumers to pick up tests in thousands of locations without spending any money.

The reality, at least in the short term, will likely be messier: Some insurers say it will likely take weeks to fully set up the system envisioned by the White House.

The new process will be difficult, the insurers say, because over-the-counter coronavirus tests are different from the doctor visits and hospital stays they typically cover.

The tests currently do not have the type of billing codes that insurers use to process claims. Health plans rarely process receipts; instead, they’ve built systems for digital claims with preset formats and long-standing billing codes.

Therefore, some insurers plan to manually manage the quick test claims in the beginning.

“This takes things back to the old days where you have a person throw all these paper slips in a shoebox and end up putting them in an envelope and sending them to a health care provider to decipher,” said Ceci Connolly, president and CEO of the Alliance of Community Health. Plans, which represents smaller nonprofit insurers.

Ms. Connolly also criticized the implementation timeline as being too rushed, with the government enacting rules on Monday to come into effect on a Saturday.

“It will be extremely difficult for most health plans to implement this in four days,” she said.

The challenges posed by insurers may soon trickle down to consumers, who will be primarily responsible for navigating the reimbursement rules of their health plans to get their tests covered.

“There will be people who buy them and then have a six-month nightmare trying to get a refund,” said Jenny Chumbley Hogue, a Texas insurance broker. She hasn’t seen a plan she’s working with that has sent members guidelines on how coverage will be handled.

Unsure of what the rules will be, Ms. Hogue advises her customers to keep not only receipts, but also the boxes the tests come in, as some plans may require the boxes as proof of purchase.

Some public health experts have criticized the plan as unnecessarily complex, saying they would have preferred the Biden administration to provide free kits directly to patients.

“Offering low-cost tests directly to the American public would be easiest from a consumer perspective,” Lindsey Dawson, associate director at the Kaiser Family Foundation, previously told The New York Times. “Someone will need to know it’s refundable, navigate the refund process, and see the cost to begin with.”

Other countries have spent more money on rapid tests. In the UK, citizens can order free rapid tests for home use through a government website. Germany has invested hundreds of millions of dollars to create a network of 15,000 rapid test sites. The United States has instead focused government purchases on vaccines and efforts to encourage their uptake.

Some local governments in the United States have invested heavily in rapid tests to counter the latest wave of cases. Washington, which has seen a significant increase in virus cases, now allows residents to pick up four free rapid tests daily from libraries across the city.

The Biden administration has instead relied more heavily on tests delivered in doctors’ offices. Federal laws have required insurers to cover these at no cost to patients since the early months of the pandemic.

The new rules require private insurers to cover eight home coronavirus tests for each person each month. The rules don’t retroactively apply to home tests Americans have already purchased, and don’t cover patients with public insurance like Medicare and Medicaid.

Under the new rules, the costs of consumers undergoing tests at their health insurance “preferred location” will be covered upfront, meaning the patient will not pay anything out of pocket. What counts as a “preferred location” varies from subscription to subscription, although many would expect these facilities to already be part of a particular insurer’s network.

Consumers who go to an out-of-network store must submit receipts for a refund, and the subscription is charged as little as $12 per test (or $24 for a two-test kit). If the sticker price is higher, the patient is responsible for the additional cost.

Health plans that do not designate a set of “preferred” locations must cover the full cost of proofs submitted by their members.

Test prices currently range from $17.98 for a pack of two to $49.99 for an individual test, according to research Ms. Dawson conducted last week.

Highmark Health, a Pennsylvania nonprofit with about six million members, plans to create a network of “preferred locations,” but won’t have it ready this Saturday.

Vaccine mandates. The Supreme Court blocked the Biden administration from enforcing a vaccine-or-test mandate for major employers, but the judges allowed a more modest mandate, requiring health workers in facilities receiving federal money to be vaccinated.

Around the world. British Prime Minister Boris Johnson’s future is in doubt after he admitted to attending a party that broke lockdown rules. In France, teachers staged a one-day strike against relaxed Covid testing rules that they fear will lead to more infections.

“The guidelines came out Monday and we started right away, but I don’t have a mechanism ready to go, Day 1 where you don’t have to pay up front,” said Bob Wanovich, a Highmark vice president who is working on the contract suppliers.

“Retailers need to have a process to capture and submit the correct codes, and we need to be able to accept it on our part,” he said. “These are the pieces that aren’t here yet.”

Until they set up that infrastructure — a process that could take weeks — Highmark Health will advise patients to submit receipts along with a photo of their test kit barcode for reimbursement.

Capital District Physicians’ Health Plan, a small insurer in upstate New York, plans to instruct members to hold onto their test cards while it figures out a system to process them.

“We get a lot of calls from consumers asking for it, so we’re trying to provide our member service with the right information,” said Ali Skinner, the plan’s vice president of communications.

Ms Skinner said the insurer was still working to have ‘preferred locations’ designated for Saturday so patients could pick up tests without the refund process, but she was unsure if it would meet the deadline.

“We’re playing against the clock now,” she said. “It’s a big boost for us. We found out at the same time as consumers did on Monday.”

Even as insurers sort out claims-processing systems, they noted that one key factor will remain out of their control: testing the offerings and shortages consumers have faced in recent weeks.

“The greater frustration our members have is finding a test, and I have no control over what’s on offer,” said Mr. Wanovich of Highmark Health. “We’re working with our providers to find out who has them, but we know it’s in short supply.”

Fear of Russia Brings Another New Purpose and Unity to NATO

When a Diagnosis Requires a Long-Term Money Strategy