Ivanka Trump Shows Off Her Tight Midriff While Walking in Miami

Soaking up the Miami sun, Ivanka Trump took a stroll near her rental home before walking Saturday morning with her husband Jared Kushner and their three children to the synagogue.

The former senior White House adviser showed off her Florida tan in a flowery cream combo during a Friday afternoon walk.

Ivanka, 40, appeared to be in deep conversation with someone on the phone, as she tied her blonde locks into a loose braid and paired the outfit with a brown shoulder bag and white sneakers.

She also had a red cord bracelet on her left wrist, which she has been wearing occasionally for years.

Ivanka, 40, only got out for a short walk near her Miami rental home to chat with someone on the phone 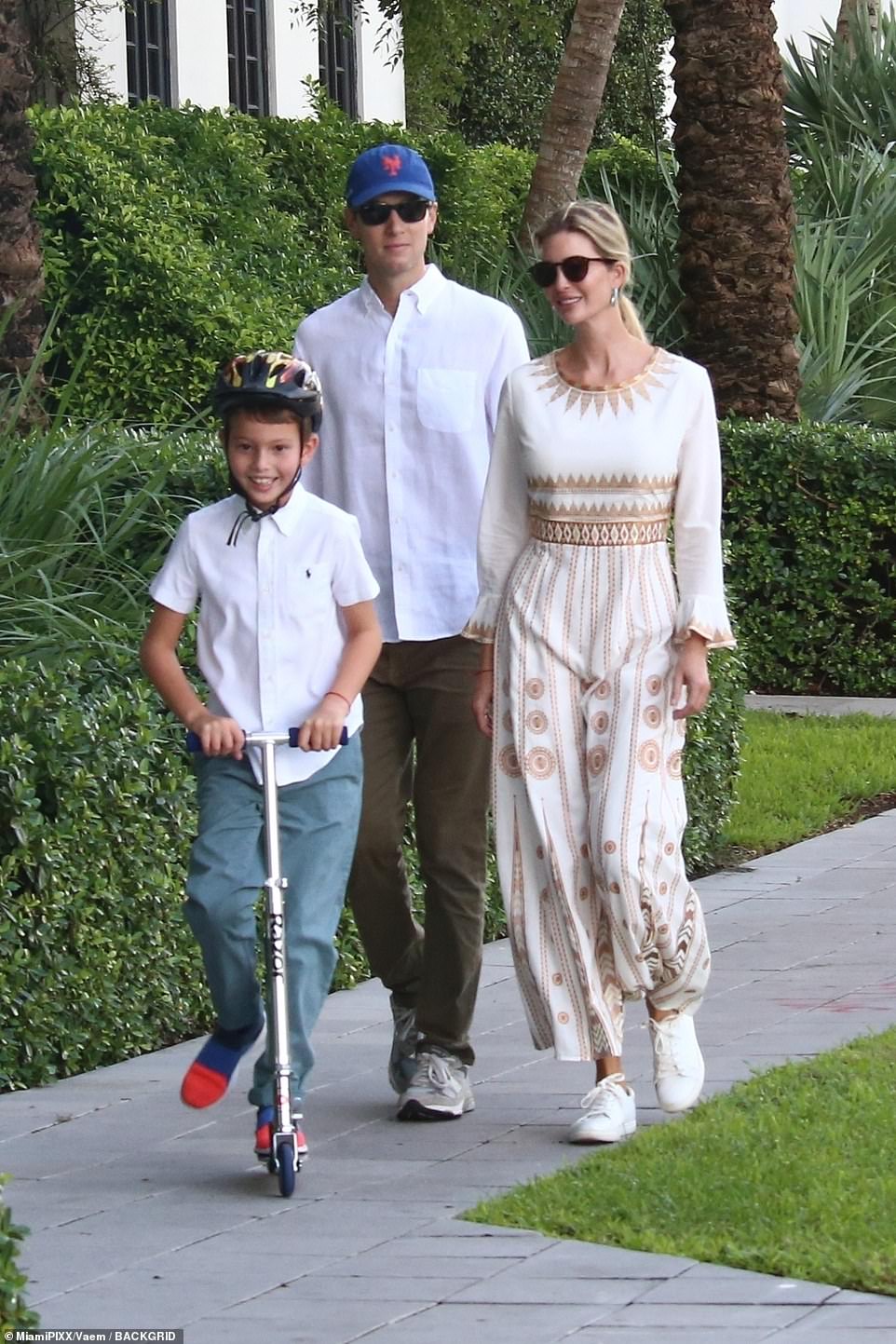 Jared, 41, and Ivanka were accompanied by all three of their children and the oldest son, eight-year-old Joseph, grinned as he raced on his scooter 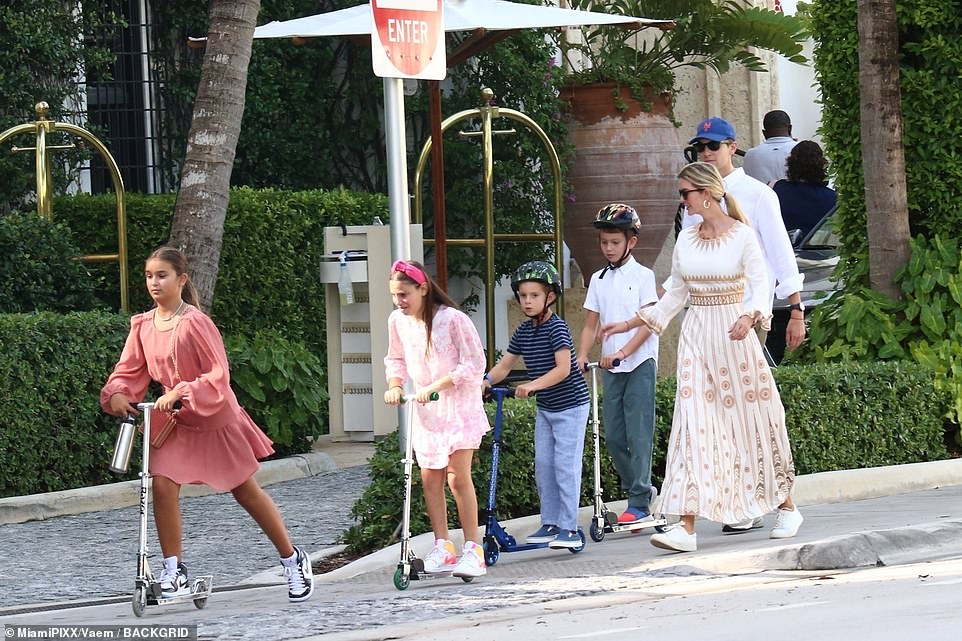 The couple had all three of their children in tow, as well as a family friend, with the two youngest boys wearing helmets for safety. 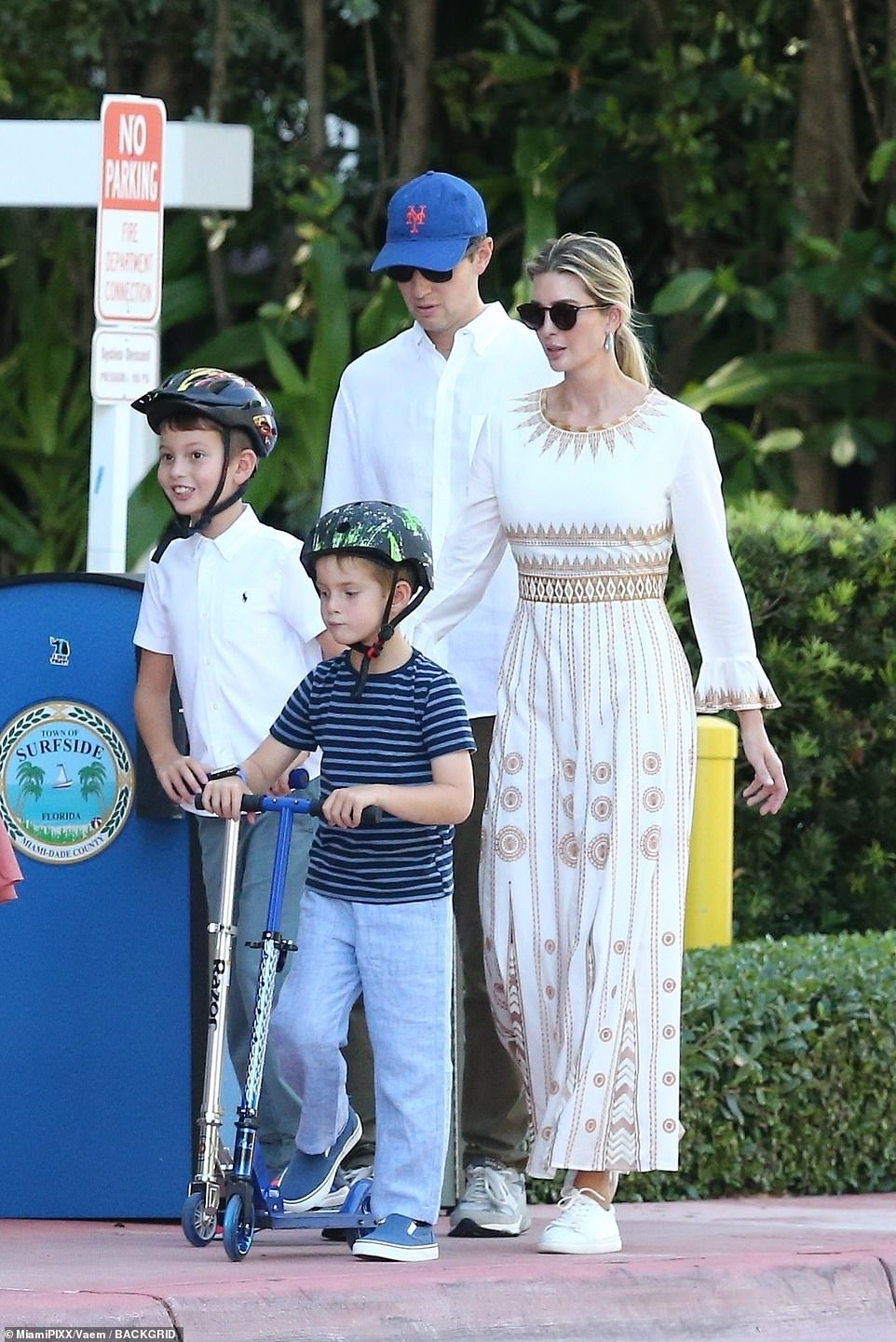 Ivanka hasn’t mentioned the purpose of the bracelet, but it does resemble the kind of red cord Kabbalah practitioners wear to ward off the “evil eye.”

The family was all smiles after going out early on Saturday morning to take a trip to the local synagogue.

All three of their children were seen riding scooters across the sidewalk, while their parents made sure they wore helmets for safety.

Ivanka converted to Orthodox Judaism before her marriage to Kushner, and the family keeps kosher and observes the Sabbath.

The makeup-free mother of three was joined by her oldest son, eight-year-old Joseph, daughter Arabella, 11, and six-year-old son Theodore. 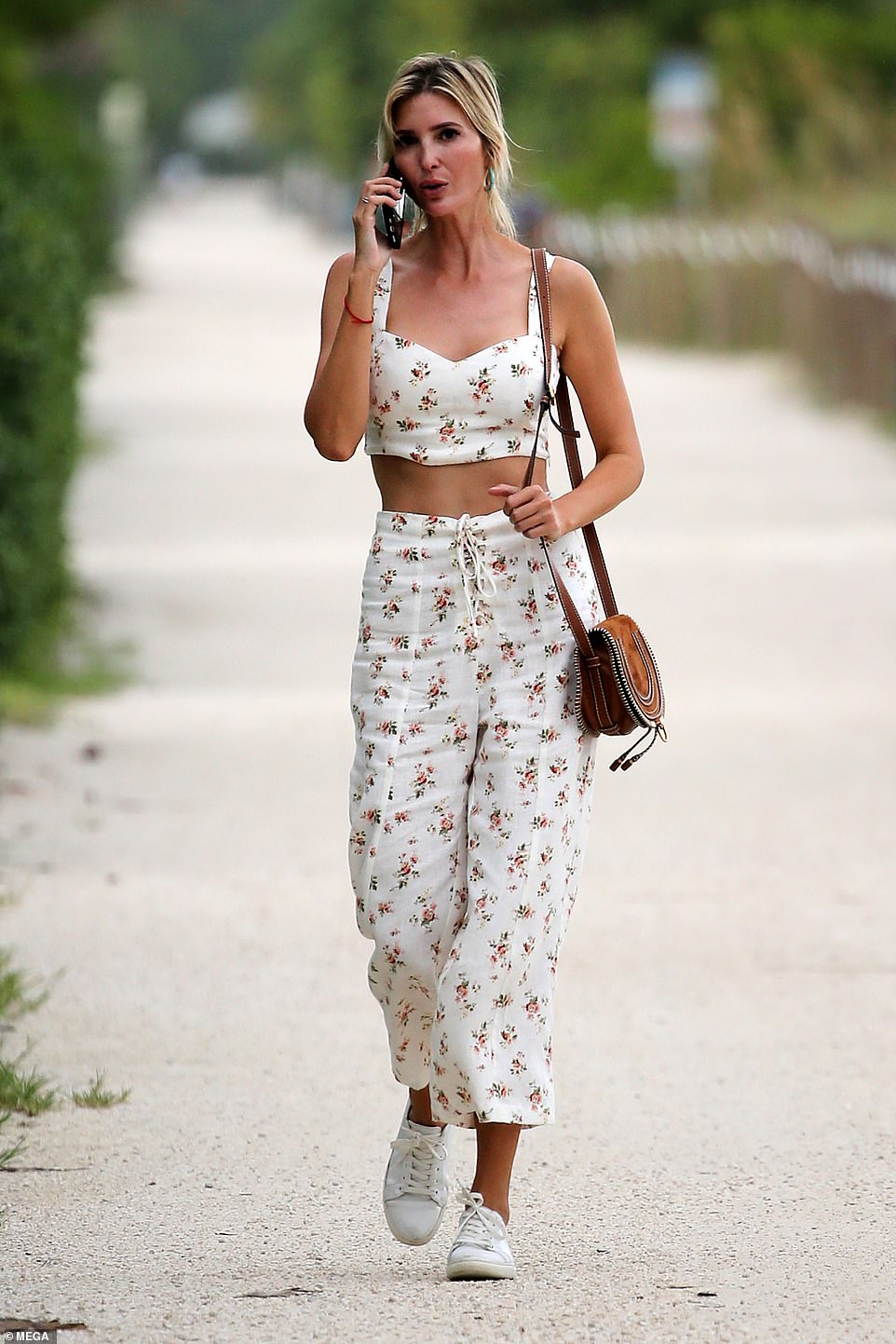 She also had a red cord bracelet on her left wrist, which she has worn occasionally for years, but the meaning of which has not been explained 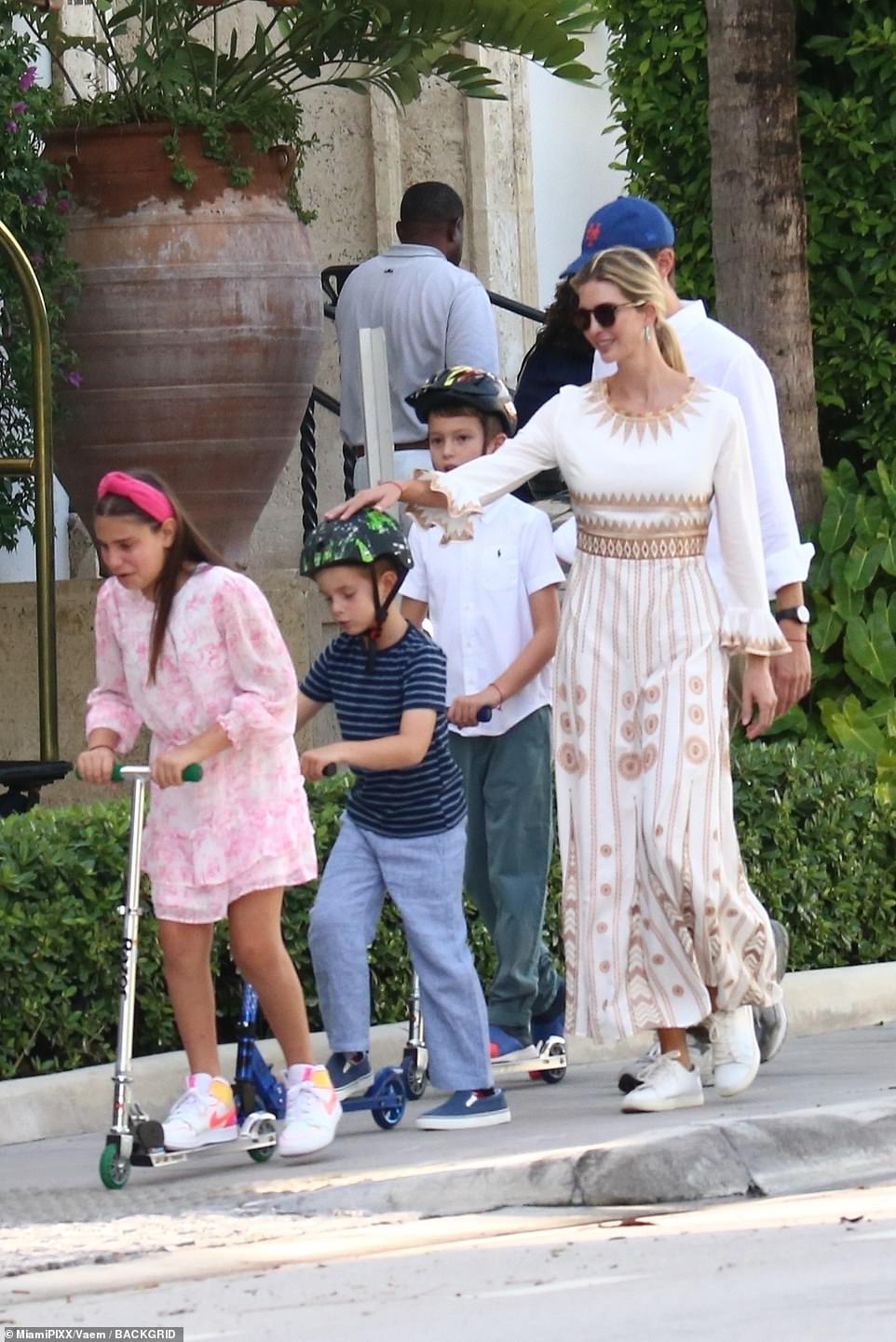 The makeup-free mother of three was joined by her oldest son, eight-year-old Joseph, daughter Arabella, 11, and six-year-old son Theodore.

Ivanka converted to Orthodox Judaism before her marriage to Kushner, and the family keeps kosher and observes the Sabbath 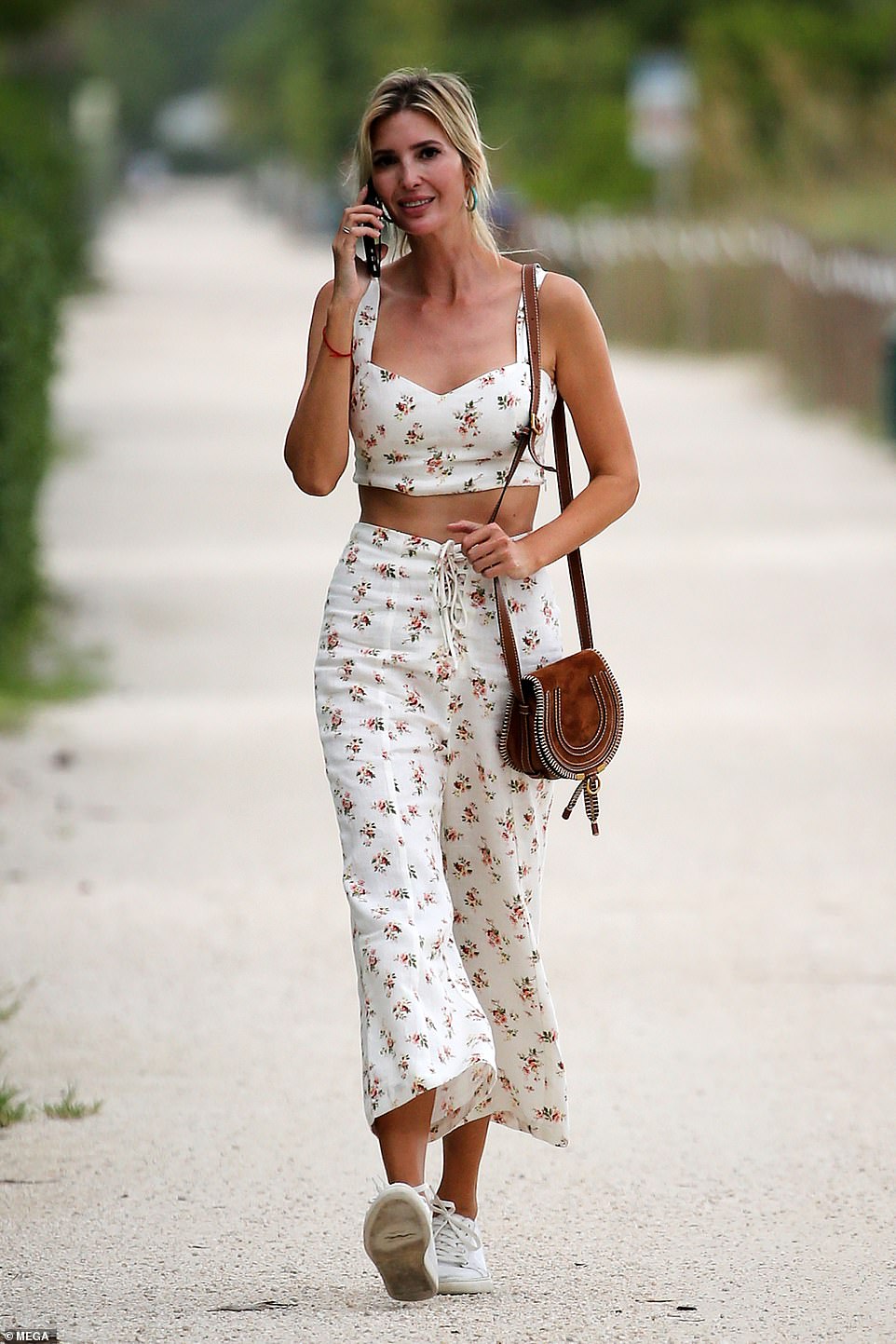 She was all smiles as she talked on the phone, clipped to the strap of her bag with silver and gold details 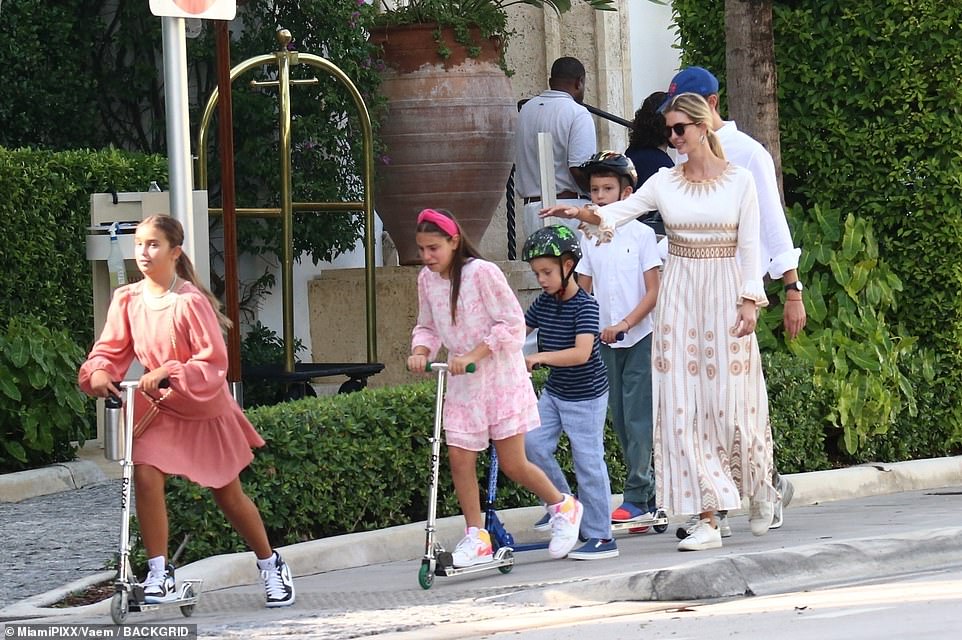 At one point, she held out her arm and appeared to be asking the kids to slow down as they ran along the side of the road.

She wore a loose jumpsuit for the outing, which she combined with sunglasses and again had the red thread on her wrist.

Her husband Jared, 41, also appeared in a blue hat and sunglasses for the family outing and appeared to be joined by one of the children’s friends.

At one point she had to stretch out her arm and seemed to ask the children to slow down as they ran along the side of the road.

The family didn’t seem to let the stress of Ivanka’s mother’s death earlier this summer, Donald Trump’s legal troubles and Kushner’s battle with cancer drag on. 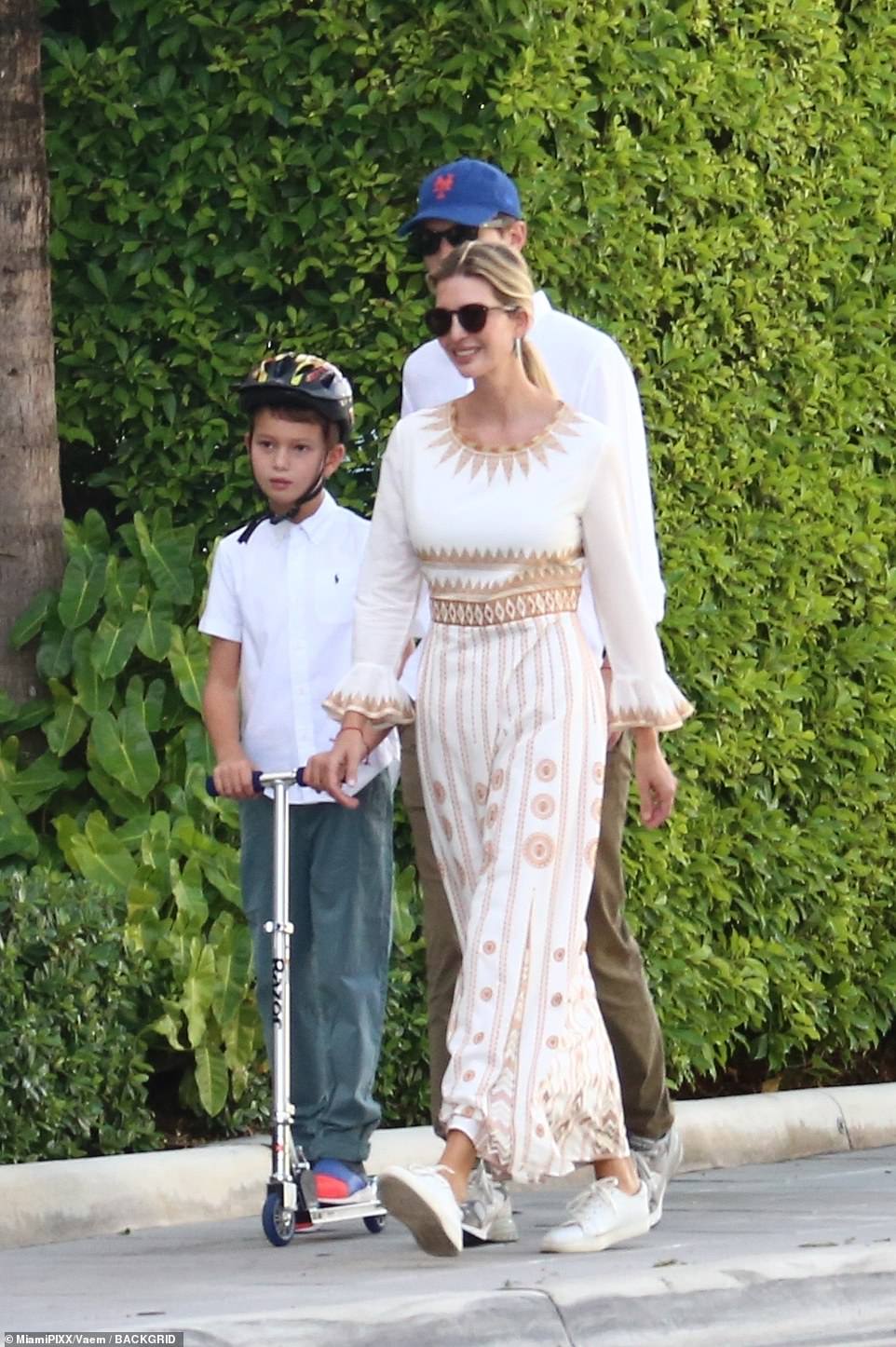 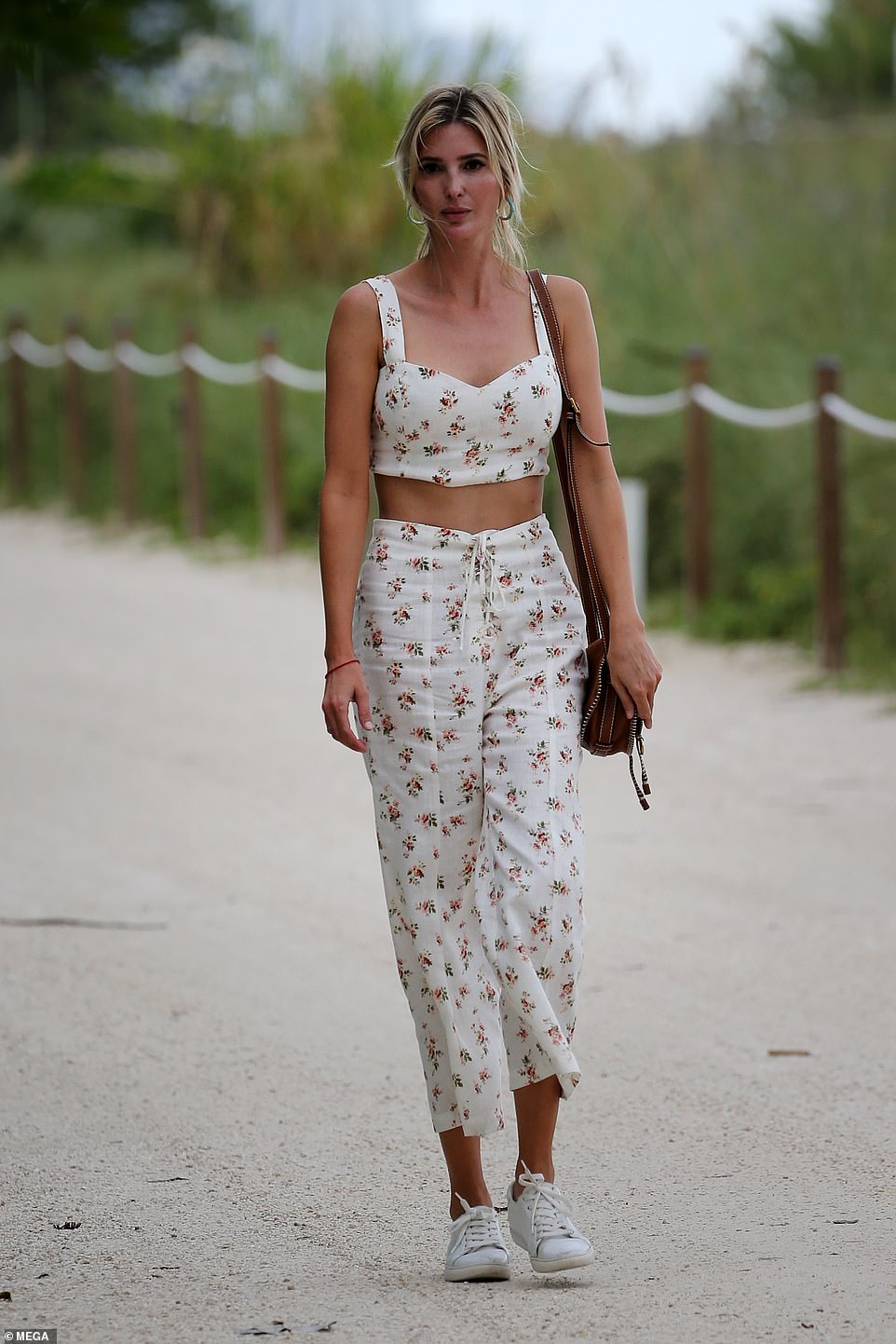 Ivanka had stepped out alone on Friday to take a walk in Miami, Florida, before making a phone call 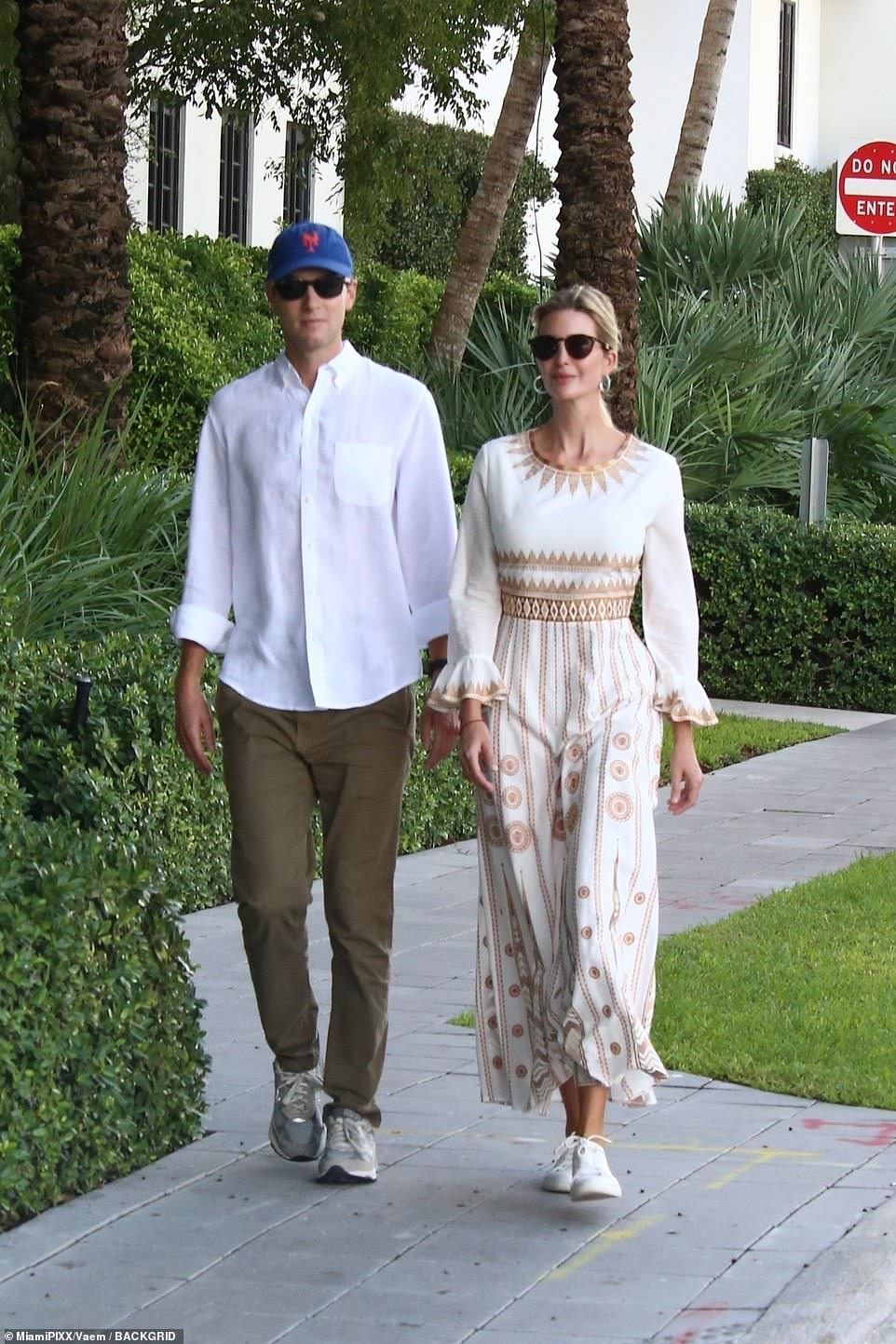 In a September interview with The National Desk, Kushner confirmed that he had had surgery to remove the thyroid cancer, saying, “I had surgery last week. It was very successful’ 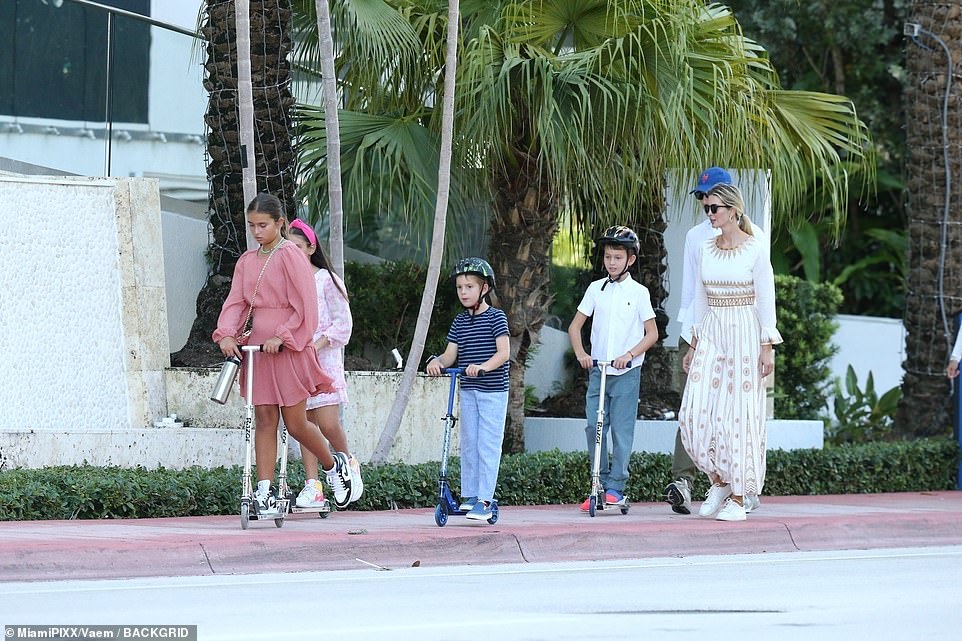 The kids seemed excited as they whizzed down the sidewalk, leaving their parents behind and keeping an eye out 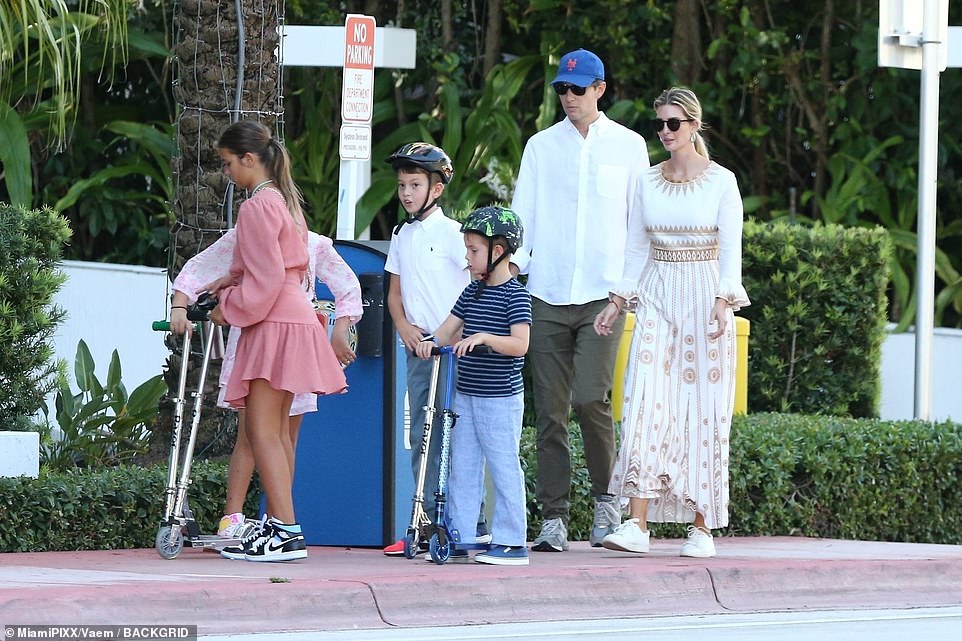 Kushner’s second surgery for thyroid cancer has been deemed a success, as the rollout continues for his White House memoir.

In an interview with The National Desk in September, Kushner confirmed the surgery by saying, “I had surgery last week. It was very successful.’

He also celebrates his book of memoirs at the White House becoming a No. 1 New York Times bestseller.

Ivanka took the time to post how proud she was of her husband’s achievement and posted on Instagram “it’s an incredible book.”